Mercedes secured another 1-2 finish, this time in the Spanish Formula 1 Grand Prix – is there any chance that Ferrari can catch up? 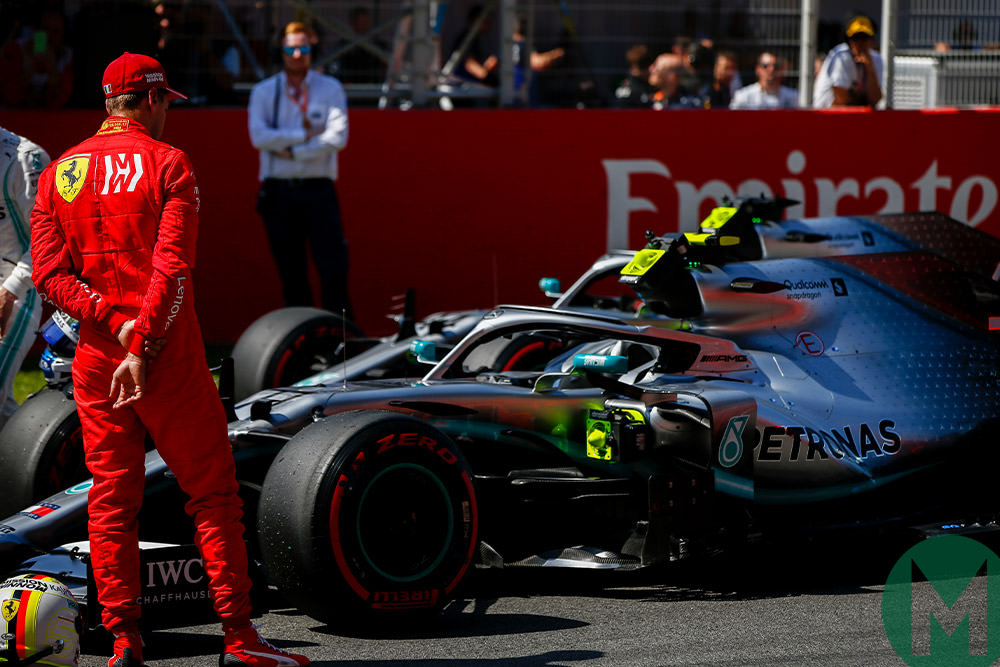 The Spanish Formula 1 Grand Prix venue, Circuit de Barcelona-Catalunya, is now synonymous with endless laps, aero rakes and staring out of the window trying to work out which tyre compound a driver is on.

Ten of the 13 days F1 spends in Spain are used for testing of some form or another, but it was actually during the three days of the race weekend itself when we got the best understanding of who is winning this year’s development race.

It will come as no surprise that Mercedes was the class of the field, given its advantage in Barcelona this weekend. It enjoyed the biggest margin of the year to date, and the signs were already there from the final day of pre-season.

Genuinely struggling up until that point to extract the expected performance from a heavily updated car in the second test, Mercedes finally unlocked some of the potential, leaving it just 0.003sec off Ferrari’s best effort. And that was before the 2019 package was optimised.

The current two-day test at the same venue becomes crucial

By the time the teams returned to Barcelona this weekend, Mercedes had a new front wing to work in tandem with an updated bargeboard assembly, and it ensured greater downforce on a track that already played to Mercedes’ strengths, with Toto Wolff warning it’s only the early stages of his team’s aerodynamic development.

“There are steps on the power to come but with mature regulations it’s not those immense steps that we have seen in the past,” Wolff said. “But still some really good work that is being done for engine number two.

“In terms of unleashing more performance of the chassis, I think we still have good ideas. It’s still just the fifth race with these new regulations and more potential to unlock. This is also why we decided to go that way. We felt that with the front wing concept we have followed there is more potential long term, maybe with the risk of a short-term struggle.”

There’s no sign of struggle for Mercedes at present, but that is in part due to Ferrari’s own slower progress. A new power unit introduced in Barcelona was a step forward that was masked slightly due to the lack of emphasis on straight-line speed in Spain, as lap time dropped away in the corners.

A modified front wing improved efficiency – and in qualifying comparisons it’s clear where Ferrari gains over Mercedes on the straights – while the engine cover received an update, but there was not enough downforce: Sebastian Vettel and Charles Leclerc struggled with understeer and in turn keeping the tyres in the performance window. 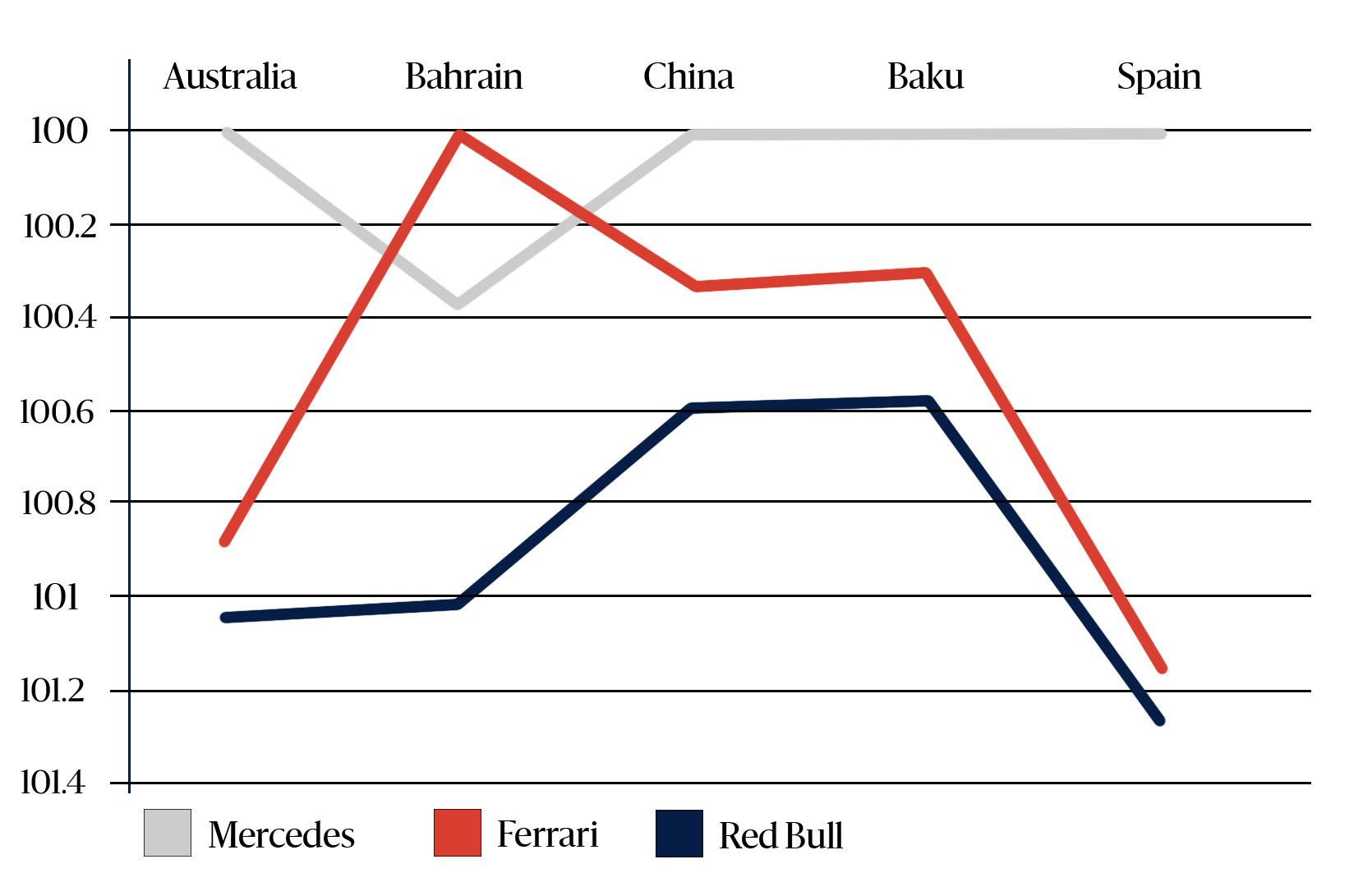 Those issues and lack of Ferrari gains opened the door for Red Bull to finish third on outright pace. Pre-race, Christian Horner described the upgrade package as “subtle”, and sure enough a team source defined the new aerodynamic parts as “little things that you wouldn’t even notice” – minor tweaks that work in tandem – that targeted a more stable rear end and consistent balance.

The team made a solid step forward from Friday onwards, with Horner admitting the majority of work at present is focusing on tyre usage and getting greater aerodynamic performance rearward of the 2019 front wing.

“Obviously there’s something like 25 per cent less rubber on these tyres and they are stiffer,” Horner said. “We were very good on the tyres at the end of last year. I think the concept of aerodynamics that we’ve evolved over the last year’s was very sensitive to the front wing, so obviously we’re having to re-balance that and re-focus.”

Away from the top three, Haas delivered a major upgrade that Romain Grosjean described as “pretty much a brand-new car”. The packaged included a new front wing, floor and bargeboards, and provided increased downforce that in turn helped keep heat in the tyres and avoid the team’s previous struggles in that area. That said, the Barcelona circuit is an easier one to get the tyres working on, and the acid test of the Haas update will be in Monaco.

Elsewhere, McLaren introduced a new front wing that is similar to the Ferrari concept. While the initial race pace wasn’t great from the MCL34, McLaren’s team performance in the pits and Carlos Sainz’s racecraft ensured an eighth-place finish. The new wing would suggest further developments to come later on as the Ferrari concept of directing airflow outside the front wheels is explored, although Ferrari boss Mattia Binotto himself concedes it might not be the way to go…

“I don’t think it is a disaster by the time that you are improving as a team,” Binotto said. “And as I often say we are quite a young team, in the learning phase, and I think in terms of processes and methodologies there is still much to learn and I am pretty happy that the team is improving. If it is a concept design problem then it depends what it is and then we can address it within the season.”

The fact that Wolff even agreed it could be a case of Ferrari not having as much development potential as Mercedes with the current concepts gives away just how confident the defending champion is, even before you look at the race results.

“I think it’s definitely an interesting thought, because when you see who was in the front in winter testing it’s very different to the ones that are in the front today – even if you look at the fights in the midfield,” Wolff said. “It was two different aerodynamic concepts and maybe there is a certain truth in it.

“But then there is never one question and one answer in Formula 1, or a silver bullet that justifies good or bad performance. I think it is about developing the car, keeping the development slope high.

“We really try to add performance from weekend to weekend from the factory, that means from the real hardware and software but also from the understanding of the car and the tyres.”

For those teams that struggled with updates in Barcelona, the current two-day test at the same venue becomes crucial in trying to understand why, as more set-ups can be explored. Thanks to the new regulations there’s still a long way to go in this year’s development race, but, for now, the defending champion just keeps getting better.