When you have a Mercedes W10 and Lewis Hamilton in it, you really don’t need any help. And yet Ferrari, whenever it looks to be in danger of winning a race, becomes generous to a fault or two. In Bahrain, the team handed it to Mercedes on a plate; in Baku it was a combination of team and Charles Leclerc; in Canada it was Sebastian Vettel.

As far as the Italian media goes, it’s Seb taking it in the neck. Heading to Germany, where it all went badly wrong for the championship-leading Vettel a year ago, there was lots of talk of a man in ‘crisis’, a man ‘under pressure’.

It’s easy to project that message from a keyboard when it’s not you having to race Hamilton in an inferior car, but the stats grab the attention nonetheless. Vettel hit back with a good win at Spa last year, but that’s his only victory in the intervening 12 months. Hamilton has won 14 races since then. He has scored 441 points to Vettel’s 271. You can’t recall a Lewis error worth the name whereas Vettel has made seven ‘racing mistakes’ over the same time frame, the latest Silverstone coming-together with Max Verstappen the most cack-handed of the lot.

Hockenheim was shaping up to further feed Vettel’s detractors. Leclerc looked as if he had the Ferrari ‘team leader’ handily tucked up when he topped both FP2 and FP3 and headed into Saturday afternoon attempting to outqualify Vettel for the fourth consecutive race. On Sky TV, Nico Rosberg, never a card-carrying member of the Sebastian fan club, was busy telling everyone that but for Ferrari team orders, Leclerc would already be ahead of him in the championship instead of three points behind.

Would Leclerc have the pace to take his third 2019 pole when Mercedes turned its engines up? A great qualifying hour was in prospect, but then… an air flow problem to the turbo put Vettel out in Q1 and a fuel system issue prevented Leclerc from running in Q3 as Prancing Horse became Limping Donkey once more.

For both Leclerc and Vettel it was huge frustration. Despite Mercedes coming to Germany with a significant aerodynamic upgrade that was both performance-enhancing and addressed the cooling issues seen in Austria, Ferrari was estimated to be making 0.7sec on Hockenheim’s straights and ceding significantly less than that in the corners.

Hamilton was feeling below par, to the extent that Esteban Ocon was put on standby, but it didn’t stop Lewis taking his 87th pole, his first here since 2008, with 0.35sec in hand over Max Verstappen, who managed to split the Mercedes on the grid, pipping Valtteri Bottas by a hundredth.

“I think I could have been closer,” Max said, “I was a bit conservative in Q1 and by Q3 felt that I was losing grip as the track temperature came up. I bottomed out and ran a bit wide in Turn 8, but I’m not sure we could have challenged for pole.”

While both Mercedes and Leclerc’s Ferrari (which will line up 10th) set their Q2 times on Pirelli’s Medium compound tyre and will thus start the race on it, Verstappen will take up his front row slot on the red-walled Soft. The Red Bull left the pits for its first Q2 run also on the Medium, but came back in without setting a time as Max reported power lag issues. After sorting the problem but still concerned about residual issues, the team sent him back out on the Soft.

If, as forecast, we have rain at race start time, it will all be irrelevant. If not, it will be interesting to watch a soft-tyred Max taking on a medium-shod Lewis on lap 1, and the strategic nuances that develop thereafter. 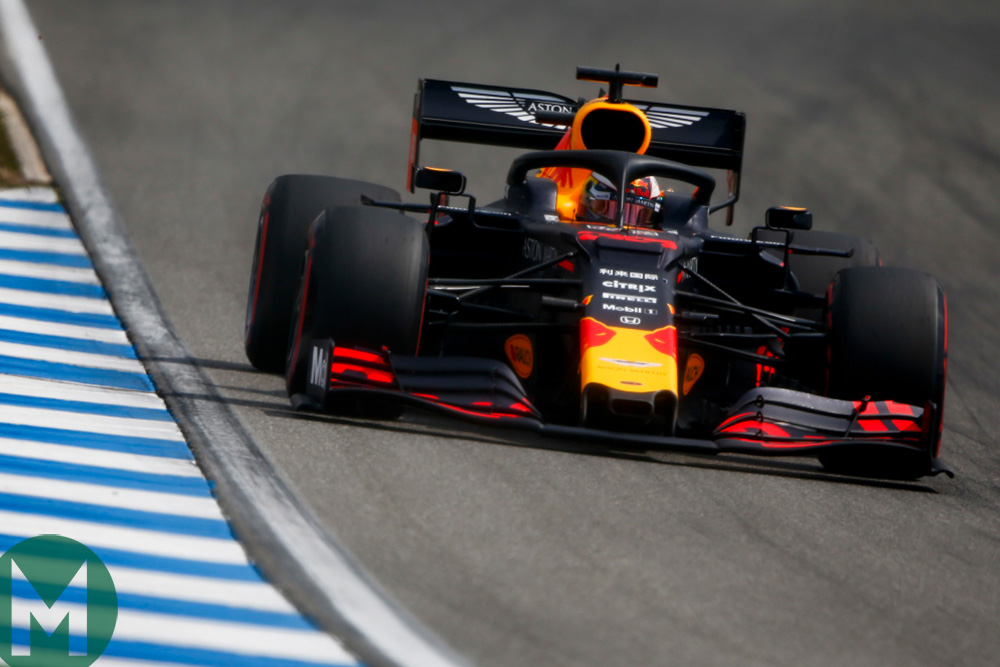 Verstappen felt he could have gone quicker Photo: Motorsport Images

Fourth place on the grid, a season best, was a gritty performance from Pierre Gasly. The Frenchman’s best Q3 lap was just 0.07sec behind team mate Verstappen’s front row time before it was deleted for exceeding track limits out of the final corner. But his first run was enough to pip Kimi Räikkönen’s Alfa Romeo to that second-row slot by a hundredth.

After his confidence-buoying Silverstone drive, Gasly could have done without a heavy shunt in Friday practice that saw the Red Bull boys breaking the curfew and pulling an all-nighter as Gasly’s car was built up around a new chassis. From there it was a good recovery and further evidence that he is starting to find his feet in the team despite such a formidable force in the other car.

Räikkönen has been quick throughout, in company with Haas, underlining the efficacy of the Ferrari power unit at Hockenheim, and achieved the team’s best qualifying result of the season. Assume that without problems the two Ferraris would have bumped him to seventh and it still equalled his seventh place at the equally grunt-rewarding Red Bull Ring.

Fast forward to the end of Q2, where the closeness of the midfield battle reached absurd proportions.

A first-lap coming together between Romain Grosjean and Kevin Magnussen at Silverstone had turned Haas team principal Guenther Steiner apoplectic.

With the kind of inexplicable tyre performance that had seen Magnussen qualify fifth in Austria and yet be monstered by Williams in the early laps, the team had reverted Grosjean to Melbourne-spec at Silverstone, while Magnussen ran in Barcelona update trim for a back-to-back that, hopefully, would go some way to providing answers. “So guys, what we don’t want you to do is take each other out on the opening lap before we’ve gathered any data, right…?”

The experiment was thus delayed until Germany where Grosjean again ran in Melbourne trim, with Magnussen in Barcelona-spec on Friday, moving on to the latest development spec on Saturday. 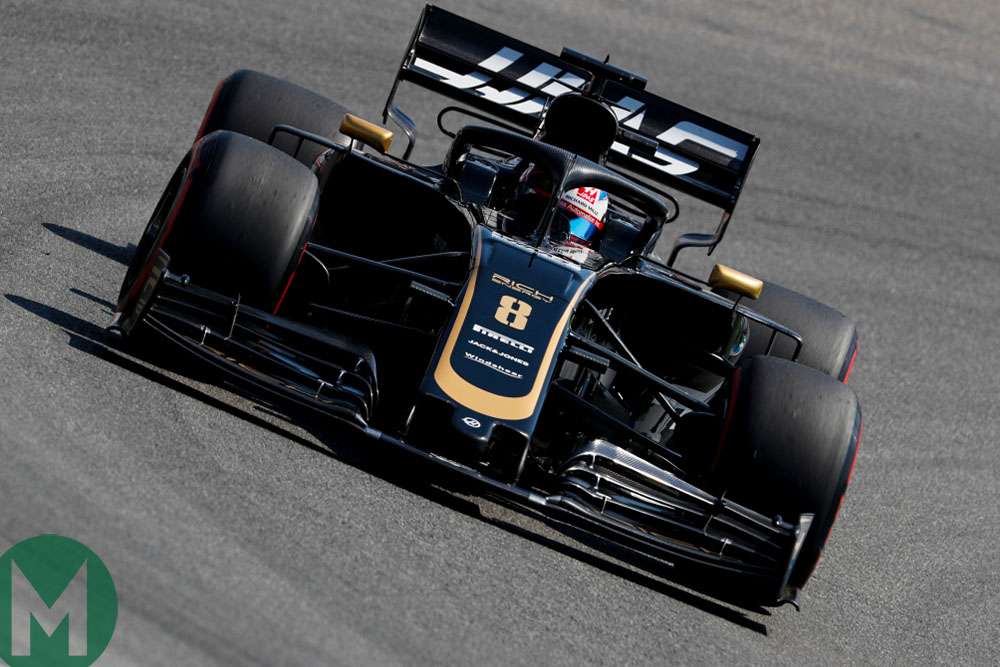 Fast forward to the end of Q2, where the closeness of the midfield battle reached absurd proportions.

That’s right, three-hundredths separating eighth from 13th. So Grosjean went through to Q3 and qualified sixth, while Magnussen, two-hundredths slower in Q2, starts 12th but with freedom of tyre choice. Conclusions to the Haas experiment? Don’t ask me. Or them! Answers on a postcard please. But Gene Haas might be looking closely at his ‘development’ budget…

Just 0.04sec behind Grosjean, Carlos Sainz did another great job for McLaren and praised the team for getting the car into a better window as the temperature went up throughout qualifying after the team had been initially surprised by the update progress made by some midfield rivals on the opening day. Team mate Lando Norris, by contrast, had his worst qualifying of the season, out in Q1 for the first time, and candidly admitted that he just hadn’t got it together as he missed out to Daniil Kvyat by 0.05sec for 15th.

Hulkenberg, always strong at Hockenheim, got the better of Ricciardo for only the second time this year by three-hundredths in Q2, and parlayed that into a four-slot grid advantage by qualifying ninth. 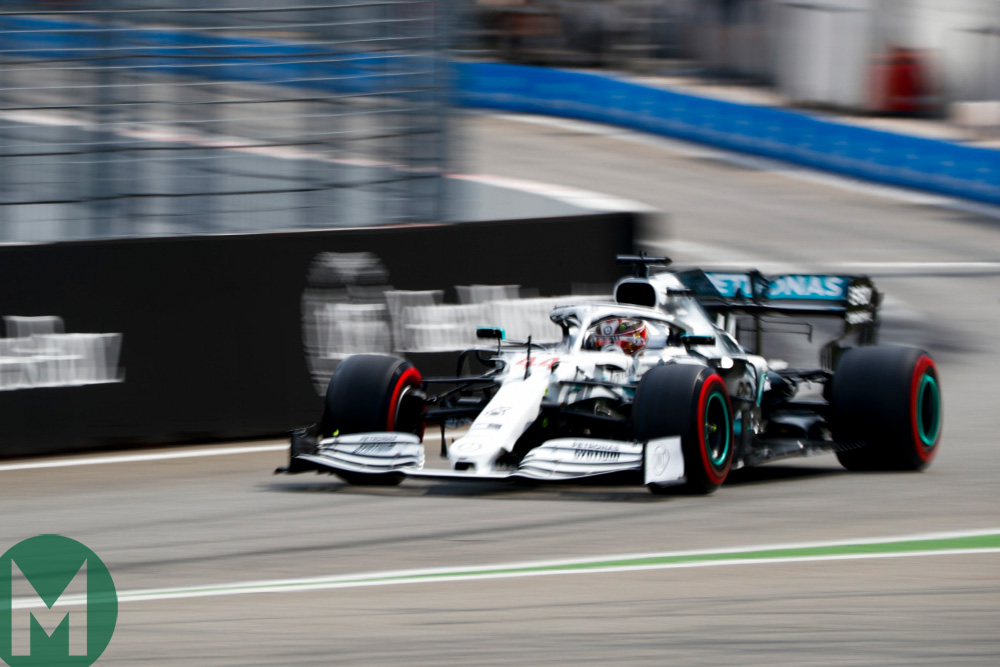 Hamilton is once again the race favourite Photo: Motorsport Images

Will Hamilton win yet again? With high chances of rain and the Mercedes on pole, it’s hard to look beyond him. But alongside him is Max Verstappen. If anyone is likely to be able to challenge Lewis in the wet, it’s Max. Do not rule out Leclerc reaching the podium from 10th. But winning? That might be a bridge too far.

Hamilton won here last year from 14th, with an out-of-sync tyre strategy and a superb drive when the arrival of rain was kindly timed for him. Might that happen for Vettel this time, starting from the back? It could, but you’d get very long odds. Quite apart from those earlier stats, Sebastian can’t catch any sort of a break right now. 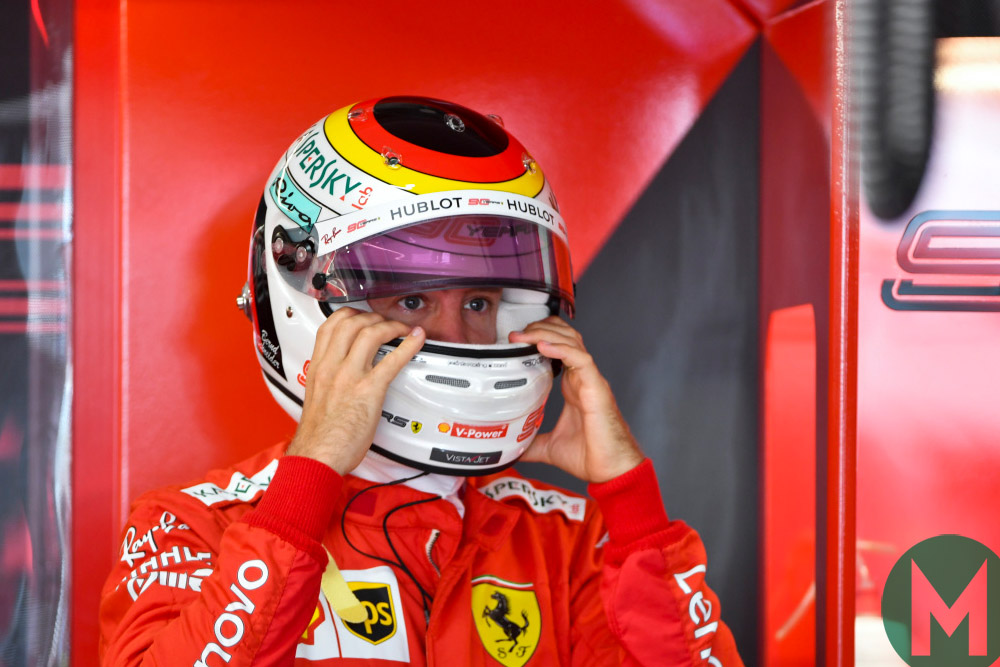 Seb’s crash helmet is a tribute to Bernd Schneider, possibly greatest ever DTM driver, who celebrated his 55th birthday on July 20 and whose career Seb followed as a kid and who is now a good mate.