Max Verstappen didn’t just claim pole position in qualifying for the 2019 Hungarian Grand Prix, he also showed that the championship isn’t won yet 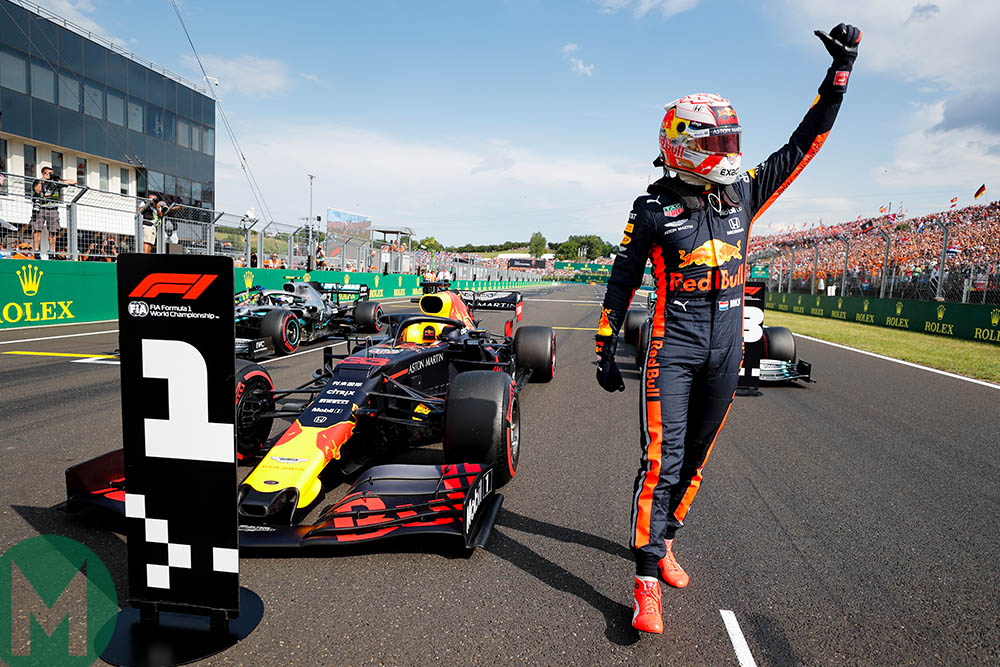 “About time, mate!” Red Bull told Max Verstappen as he became the 100th driver in F1 history to record a pole position.

Max thought he was going to do it in Mexico last year and was visibly annoyed when Red Bull team-mate Daniel Ricciardo – who celebrated as if he’d won the championship! – pipped him by three-hundredths.

That put paid to Max usurping Sebastian Vettel as the youngest pole-sitter of all time but it was all forgotten as Max’s pleasure in Budapest was as marked as his disappointment in Mexico City.

With the RB15 looking ever more threatening since the introduction of its updated front wing in Austria, you figured that the team might be in the pole fight around Hungaroring but that Mercedes was still favourite. Verstappen though, in a rich vein of form, produced a fantastic lap to pip Valtteri Bottas by two hundredths, the pole cemented by a slightly better exit from the final turn.

“It feels incredible,” Max said, as he stepped out and was interviewed in front of the travelling Dutch army. “The car was absolutely flying.”

Perhaps more accurately, its driver was. Pierre Gasly, by contrast, was sixth, 0.88sec slower… “Max was on fire this afternoon,” said Christian Horner. “He really needed to nail that last corner, and did.” 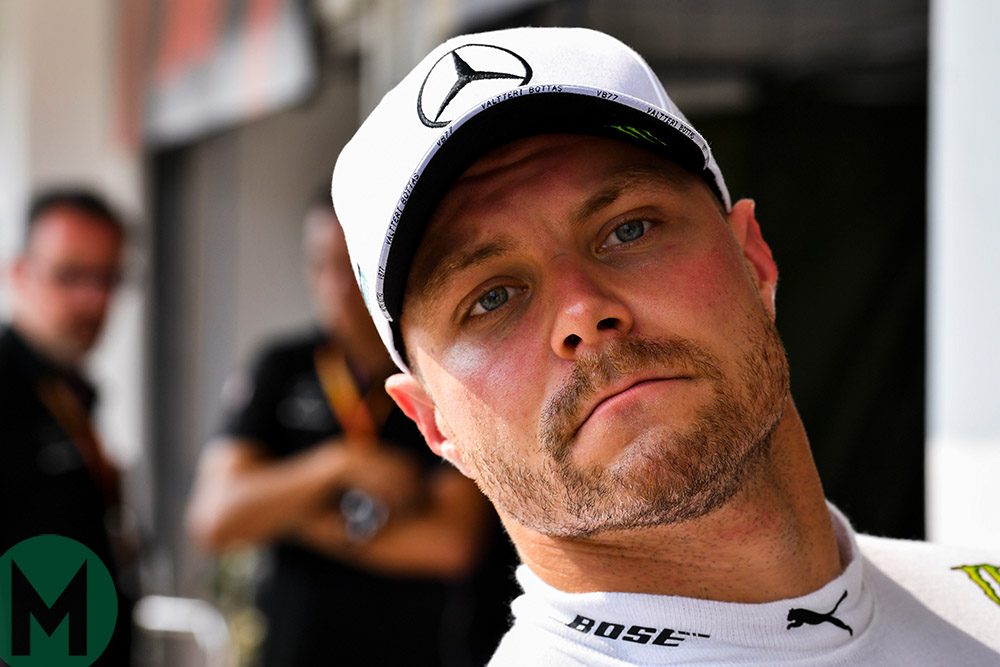 Bottas missed out on pole by two-hundredths of a second Photo: Motorsport Images

Valtteri Bottas might not be ‘box office’ but you’ve got to feel for him, under pressure as he is to retain his Mercedes drive. Hockenheim hurt. He was by no means the only driver to make a mistake – most did – but it blew a golden opportunity with Lewis Hamilton suffering both physically and on-track.

“It’s always painful when it’s down to you,” Bottas admitted in Hungary. “The pace in the wet was not so good as we hoped. And we didn’t have the best performance on slicks at high speed: it was very oversteery and a bit too much on the nose. We were still overheating the rears which we weren’t expecting in those temperatures and then, pushing, I made the error.”

Valtteri had punished himself for a couple of hours on a bike the day after the German race and was over it by lunchtime. He turned up in Budapest determined to turn the page but then lost the whole of FP1 to an electrical issue that meant a power unit change for FP2. That was pretty much wiped out by changeable weather, but even in truncated running, Bottas felt that the W10 was better in the wet than in Germany.

He did a strong job to almost take pole and to outqualify Hamilton by 0.17sec. He could have done with those extra three-hundredths though. It’s just not quite happening for him.

Hamilton said he’d literally slept for three days between Germany and Hungary, trying to fight off the bug that incapacitated him at Hockenheim, but was still in need of a bit more rest.

“The car didn’t feel quite as good in qualifying as in FP3 (which he topped by a hundredth from Verstappen) but it’s a long run to Turn One and the race strategy is going to be interesting,” he predicted. 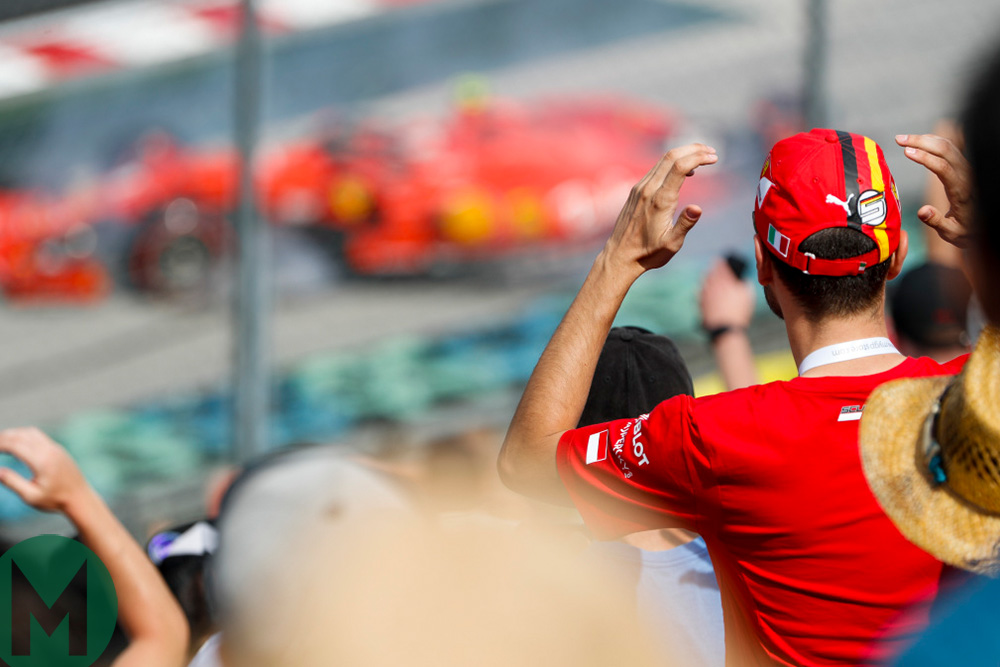 Leclerc was lucky to escape his bump with the wall Photo: Motorsport Images

Ferrari suspected it had insufficient downforce to truly challenge around Hungaroring, and was correct. Charles Leclerc put his car on the second row, 0.03sec quicker than Sebastian Vettel. The red cars were a tenth and a bit quicker than Mercedes and Red Bull in sector one – the grunt sector – but gave away more than three tenths to their rivals in the twisty final sector.

Leclerc admitted to being immensely fortunate to be able to finish qualifying after reversing into the tyre barrier on the exit of the final turn in Q1, damaging the rear wing and crash structure.

“Thanks to the team for the good work,” he said, “but it was an unnecessary mistake from me, which is two in the last two grands prix. I had Seb in front of me starting a lap and I knew I’d lose a bit of downforce but that’s no excuse. Completely my mistake. But Q3 was positive and I don’t think I could do any better.”

Some predict that given Ferrari’s top speed they could still be a factor on race day, but that’s not the way Vettel sees it.

“The engine’s not so important here but we can’t be happy not being able to properly join in the fight. Hopefully the tyres will all melt and we’ll end up with more than one pit stop, otherwise it’s going to be difficult.”

McLaren came to Hungary with expectations fully under control on a slow-speed track on which they thought they may struggle to set the midfield pace. And yet, there they were, seventh and eighth, Lando Norris five-hundredths ahead of Carlos Sainz.

Norris knows the circuit well and went a long way to cementing his McLaren future with his impressive test here in 2017, when he split the Vettel/ Räikkönen Ferraris on the timesheet.

“It’s good to bounce back after going out in Q1 at Hockenheim,” he admitted. “It all went smoothly apart from my exit out of Turn 14 on my last lap.”

Sainz got closer to him than earlier in the weekend. “I was a bit off in Q1, had some traffic and didn’t get into a rhythm, but I got it together in Q3.” He certainly did, finding the best part of half a second between Q2 and Q3 as these two continue to push each other. 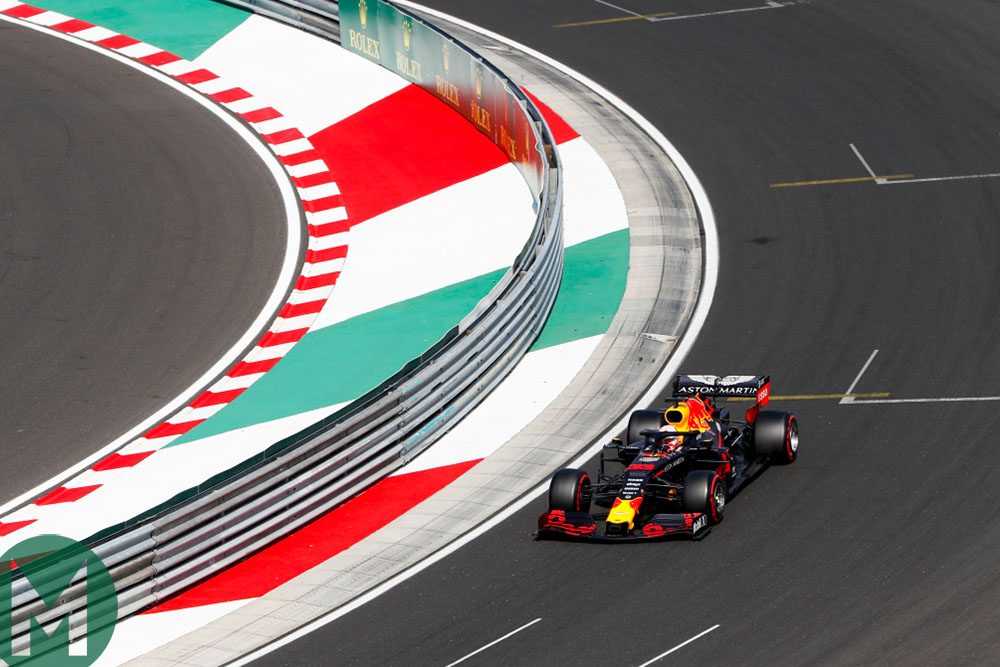 At Haas, Romain ‘Melbourne-spec’ Grosjean put his car ninth on the grid, while Kevin ‘latest-spec’ Magnussen will line up 14th (after Antonio Giovinazzi earned himself a three-place grid drop for impeding Lance Stroll), with Kimi Räikkönen completing the top 10 in the first Alfa Romeo.

Haas’ Guenther Steiner didn’t speak to his drivers after their latest bit of contact in Germany but sat down with them in Hungary. He explained that the team might have to start telling them who was going to do what when they find themselves in close proximity on the track, which tends to be every other weekend.

“People might say that the relationship with Kevin is not so good,” Grosjean offered, “but we phone each other once a week to talk about what we can do better. I like working with Kevin.” Ahhh.

And Magnussen: “We might be blaming each other on the radio but we do have a pretty good working relationship. Romain’s a cool guy and I think it’s been blown out of proportion a bit.”

So, Guenther, will a respectful on-track relationship be a key factor in Haas’s 2020 line-up?

Regarding that, Nico Hulkenberg’s name is being mentioned. After ‘The Hulk’s’ disappointing crash at Hockenheim, Renault team principal Cyril Abiteboul was quoted by the French media saying that whenever Nico is about to achieve great things, he seems to sabotage himself.

“Let’s face it,” he added, “at the moment we are checking the options we have for the future, and Nico knows that.” Which doesn’t exactly sound like a ringing endorsement of a bloke about to be re-signed, although Hulkenberg played it down, commenting that when he heard it, in English, its real tone may have been lost in translation.

“I don’t know. I think he has a contract at Renault. That would be explosive, eh?!” 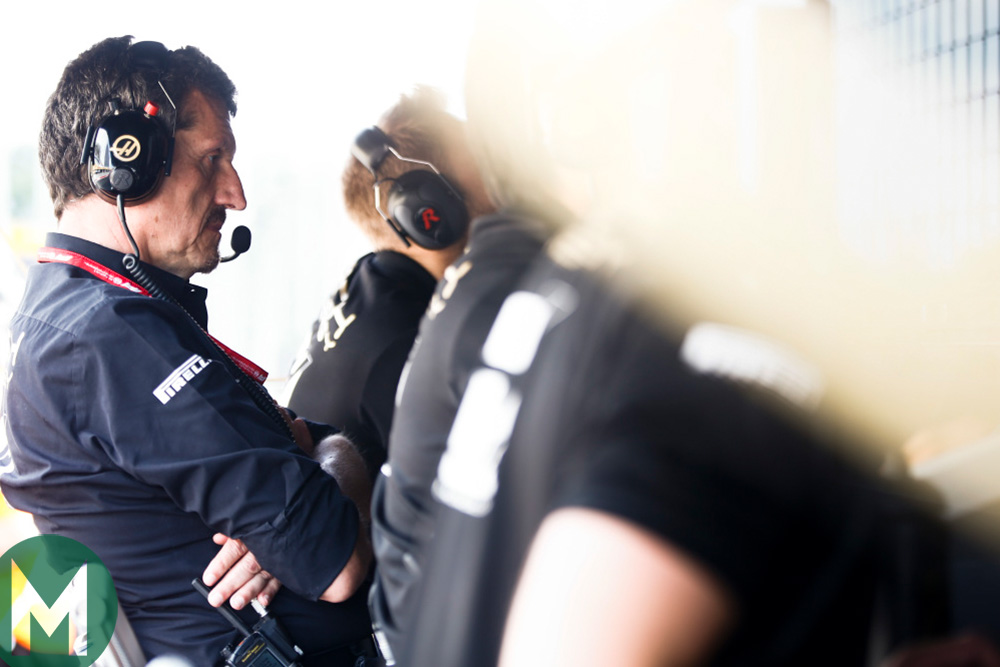 Potentially, yes. If there’s a combination that might make even more contact than Magnussen/Grosjean it’s probably Kevin and the man he not that long ago instructed to Hoover the spherical parts of his anatomy…

As Renault failed to get a car into Q3, Hulkenberg narrowly missed out to Kimi Räikkönen by 0.05sec while Daniel Ricciardo found himself mired in Q1 after being mixed up in traffic with Sergio Perez.

“It was a mess and I didn’t create space,” the Aussie admitted. “It’s the most upset I’ve been in a while.”

Perez, 17th, wasn’t exactly ecstatic either, as Ricciardo tried to go around the outside of him in Turn 14 and he was forced to respond: “I think what Daniel tried was very disrespectful,” Checo stated. “I started my lap too close to Norris and he was too close to me.”

Last but very definitely not least, George Russell came within 0.06sec of bouncing Grosjean’s Haas out in Q1 and making it through to Q2 for the first time. Williams has started to see better tunnel/track correlation and Russell’s lap was within 103.2% of Verstappen’s pole, the closest he has been all season. Russell is doing a great job and may well just be adding to Toto Wolff’s selection headache, even if that’s a long shot.

Starting at the head of the pack, will anyone beat Verstappen? You get the feeling that if the Red Bull is vulnerable at all, it’s likely to be on lap 1. If Max completes it with his nose in front, I’d fancy three wins out of four.

And then, would you perhaps start to think the unthinkable, in terms of a championship challenge?

“We’re not looking at that but it’s certainly been a pretty good last few weeks,” Christian Horner admitted. After the summer break, Spa and Monza might well prove to be Ferrari territory but Honda – delighted with its first pole — has a big upgrade coming. And the way Max is driving…

At the start of the year, people scoffed when Helmut Marko predicted Red Bull-Honda would win five races. The good doctor doesn’t look at all daft now!