Charles Leclerc withstood a two-pronged Mercedes attack to win the Italian Grand Prix for Ferrari, making it two victories in a row for the 21-year-old.

The grandstands at Monza erupted as they watched a Ferrari cross the line in first position for the first time since 2010, following Leclerc’s intense defence.

Despite a Ferrari power advantage over the Mercedes, Leclerc was hampered on strategy when team-mate Sebastian Vettel span early in the race. After pit-stops, the Ferrari driver, on hard tyres, had to first fend off Lewis Hamilton, on faster medium tyres, then Valtteri Bottas, with a fresher set of mediums.

“I’ve never been so tired,” said Leclerc, as he climbed out of the car, now ahead of Vettel in the F1 world championship standings.

Starting from pole, Leclerc maintained the lead from the start and remained relatively unchallenged by the following Lewis Hamilton and Valtteri Bottas, during the early part of the race.

Behind, however, his team-mate Sebastian Vettel spun from fourth place at the Ascari chicane, then rejoined in the path of Lance Stroll, damaging his front wing and sending Stroll spinning out. A subsequent ten-second stop-go penalty ruined any hope of Vettel scoring any points.

Mercedes looked to press its numeric advantage as the pit-stop window opened, bringing Hamilton in for medium tyres on lap 20 to try and undercut the Ferrari.

Leclerc stopped for hard tyres a lap later and returned ahead of the Mercedes but Hamilton was close — within DRS range. He came close to overtaking, but was squeezed off the track, a manoeuvre that earned Leclerc a cautionary black and yellow flag.

The duel continued for 20 laps, Hamilton never having enough power to draw level with the Ferrari on the straights, and unable to capitalise on a lock-up that caused Leclerc to cut a chicane. 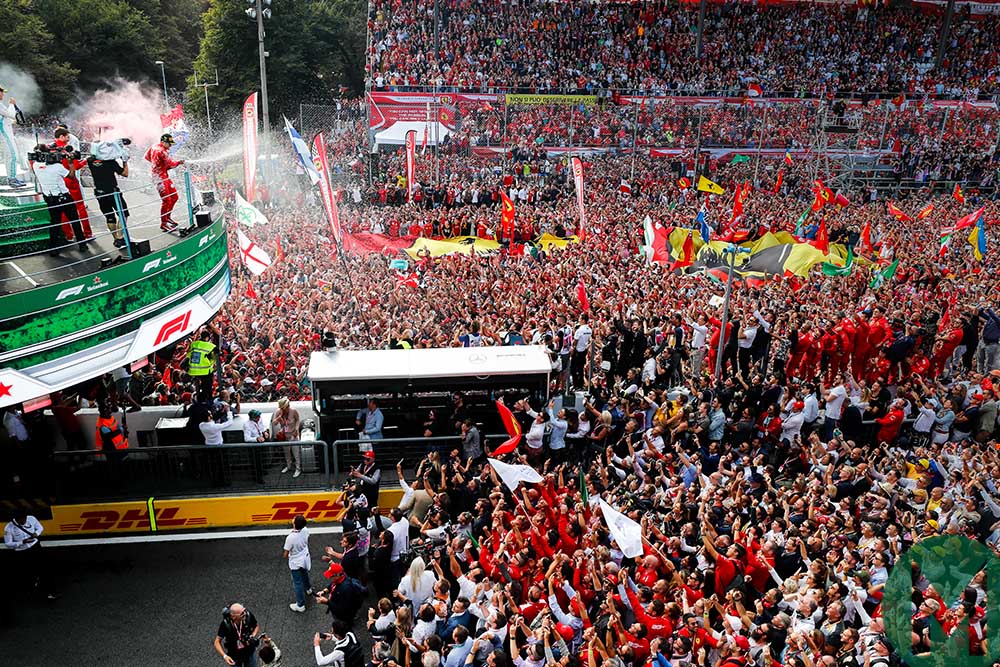 Leclerc sends some champagne the way of the Monza hordes Photo: Motorsport Images

In the end, it was a mistake by Hamilton that cleared the way for the fast-paced Bottas, on much fresher medium tyres, to take up the hunt for 11 laps. Despite intense pressure, Leclerc held on for victory.

Behind the top three, Renault maintained its qualifying pace, finishing fourth and fifth, while Sergio Perez and Max Verstappen climbed from the back to finish seventh and eighth.

Hamilton retains a dominating lead in the drivers’ championship, with 284 points; a 63-point lead over Bottas. Leclerc is now fourth with 182, three points behind Verstappen and 13 ahead of Vettel.

In the constructors’ championship, Mercedes leads with 505 points, followed by Ferrari with 351.