If ever a qualifying session was a microcosm of a season’s perspective, it was today’s in Monte Carlo. Mercedes is operationally superb; Ferrari can’t get out of its own way.

Quite literally. Mark Hughes has already comprehensively detailed the technical reasons behind a volte face that has seen Mercedes leapfrog the likes of Ferrari and Red Bull in slow corners and promote themselves to favourites around Monaco.

Read the full, in-depth report on the 2019 Monaco Grand Prix

So, after Lewis Hamilton and the three-pointed star had topped both Thursday practice sessions, it was a pleasant surprise for Ferrari to find home hero Charles Leclerc six-hundredths quicker than the Mercedes best in FP3 on Saturday morning.

Make no mistake, Leclerc wanted this one. He first watched the Monaco GP from an apartment on the pit straight when he was four. His father, Herve, finished eighth in the Monaco F3 race nine years before Charles was born, just behind Damon Hill and Martin Donnelly. It was the same year that Ayrton Senna set that mesmerising pole that blitzed Alain Prost by almost a second and half in the same car. Herve was an Ayrton fan but, later, it was all about the red cars as he and Charles sat and watched grands prix together on TV.

Just days before Herve passed away with cancer two years ago, Charles told him he’d signed a Ferrari contract when, in fact, he hadn’t.

“I lied to him that I’d signed, not for 2018, but 2019,” Leclerc explains. “I’d promised myself that I absolutely wanted to achieve that and so I told him that I had. I knew it was going to end for him in the next week. To put a bit more happiness in all of that, I just told him I did it. And I remember the tears of happiness in his eyes.”

And so here Charles was, in a Ferrari at Monaco, living their dream, wearing a split-livery crash helmet, one half in tribute to Herve and the other in memory of Jules Bianchi, his friend and mentor. Quickest, ahead of the season’s most important qualifying hour. Sebastian Vettel, no doubt feeling the heat, locked up into Ste Devote and put the second Ferrari in the tyre barrier. Given Leclerc’s street circuit prowess so clearly demonstrated in Baku, no doubt Seb had been anticipating a tough battle and was chasing that last bit. 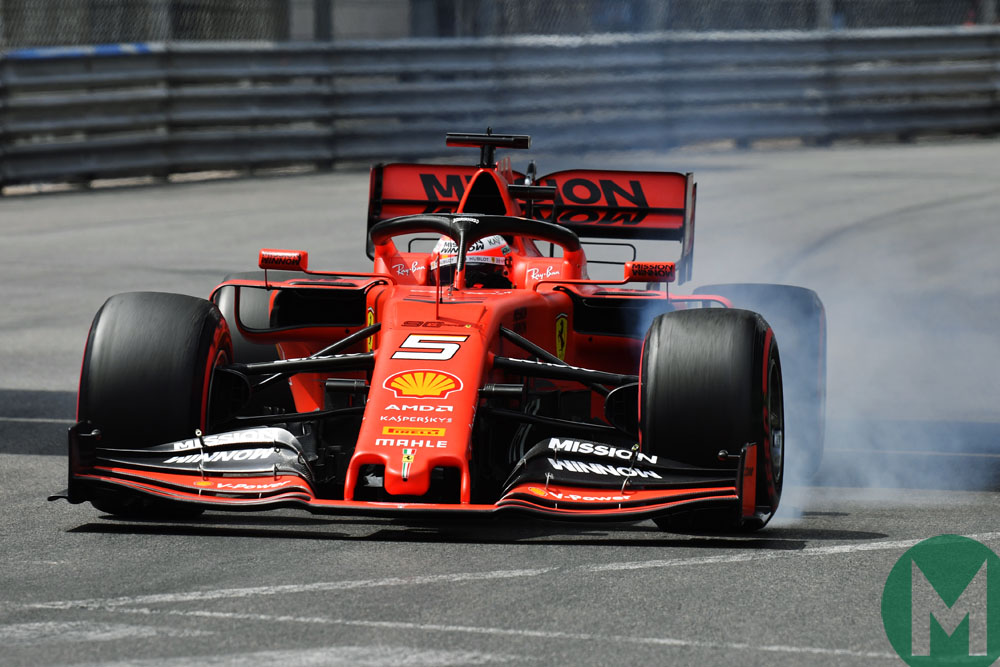 Vettel’s faux pas prompted a virtual safety car (VSC) and, ironically, the only man to fall foul of speeding under it, was Leclerc. There was panic among the locals that the young Monegasque’s bid for pole and victory could be derailed by a grid penalty before qualifying had even begun! But, consistent with previous practice session VSC transgressions, Leclerc escaped with a reprimand, his first of the season.

Then Ferrari tripped itself up properly. Leclerc’s first Q1 run, a 1min 12.149sec, was a second better than Vettel’s, who locked up at Mirabeau. It was believed by the team to be quick enough to make the top 15 and save a set of Pirelli softs for use in Q2/Q3.

But this was Monaco, where track evolution is high and drivers risk more on their later runs. As everyone started their second runs, Ferrari No16 remained in the garage…

As the session ticked down Leclerc was 12th and the back of the midfield was now threatening 1min 12sec. Vettel, who had to do a second run, was obviously going to demote Charles, and Albon (quick all weekend), Perez (who wasn’t), Norris and Hulkenberg all had the potential to beat Leclerc’s time.

Perez was slow in sector two but the other three, predictably, all beat the Ferrari. Leclerc was 16th and out by five hundredths. He stood there, shaking his head in disbelief.

It was a classic case of F1 over-complication. Computer-generated cut-off times and so forth. All you needed to be doing was looking at the timing screens. Albon, Norris and Hulkenberg all had team mates who had already beaten Leclerc’s time, so it wasn’t exactly a surprise!

“We simply miscalculated the cut-off trying to save the tyre set,” admitted team principal Mattia Binotto to the media a couple of hours after the disaster. “There was an opportunity to over-rule the decision but we didn’t.”

The smart move would have been to have Leclerc back out, circulating slowly, just in case, but taking nothing out of the rubber. Doing that at Monaco you need eyes in the back of your head and radio/GPS communication that is right on the ball, or you risk an impeding penalty. Given the lack of strategic fleetness of foot demonstrated by Ferrari thus far in 2019 that may have been a big ask, but surely preferable to what transpired.

It is unlikely that Leclerc would have had the pace to trouble Mercedes for pole, but not impossible.

After Valtteri Bottas had looked more comfortable with his W10 than Lewis Hamilton, the Finn driving with great confidence and quickest after the first Q3 run, Hamilton produced one of those special laps to pip his team mate by 0.09sec.

“I had to dig deeper than ever!” a delighted Hamilton beamed after claiming his 85th pole. “I had a big oversteer moment at Rascasse and only just pulled it off.” 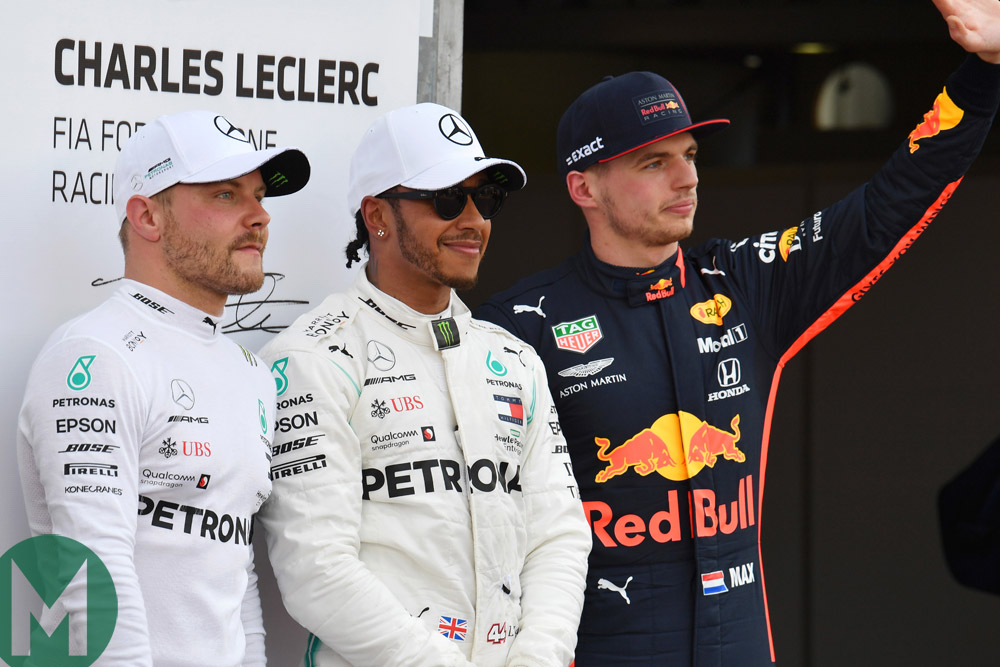 Bottas was as hacked off as Hamilton was delighted.

“I thought I had it, but not…” he grimaced. “I had traffic on my out lap on my second Q3 run and didn’t get the tyres in properly, then I had a big snap at Portiers and didn’t improve the time. Very disappointing.”

The only other man with a chance of upsetting the Mercedes applecart was Max Verstappen. Last year he’d been sucked into a psychological battle for supremacy with team mate Daniel Riccardo, the pair separated by a cigarette paper’s width throughout practice until Max put the Red Bull in the wall at the Swimming Pool at the end of FP3 and missed qualifying. He calls it a career low and, according to Christian Horner, has matured ever since.

Always optimistic of splitting the Mercedes, Verstappen pipped them in Q2 with a 1min 10.618sec lap. It was a time he couldn’t quite match in Q3.

“I’m satisfied overall,” he nodded. “Q2 was a very good lap because the tyres were switched on. In Q3 I went into Turn 1 and the rears weren’t quite there. On the last run I also didn’t have a lot of grip, and aborted. But, in general, a good job.”

Team mate Pierre Gasly was half a second adrift, fifth, and just a tenth behind Vettel.

After missing out on much of FP3 after his off, Vettel was on the back foot and had a scrappy qualifying. After his lock-up in Q1, he clobbered the barrier at the Swimming Pool in Q2 and then at Tabac in Q3. The best he could do was almost nine tenths shy of Hamilton’s pace. You could probably assume he was two or three tenths behind the car.

“Hope for rain and a lottery….” he admitted. “It’s a hard one to take. If it’s dry it’s going to be boring. I’ll have to take some risks, even risk crashing, and be extreme in my overtaking, because it’s basically impossible here.”

Twice Monaco pole man and last year’s winner Daniel Ricciardo deserves special commendation for putting the first Renault seventh on the grid, as does Kevin Magnussen for taking ‘best of the rest’ honours in a Haas which, to Guenther Steiner’s great relief, managed to generate some tyre temperature.

Hats off too, to Toro Rosso, who got both Daniil Kvyat and Alexander Albon into the top 10.