The enduring image of the 2020 Bahrain Grand Prix will be a driver miraculously emerging from the flames as part of his destroyed car is clamped between a failed barrier.

That Romain Grosjean jumped clear of the fireball that had engulfed the front of his Haas – the rear left trackside, completely separate from the rest – is astonishing. That he did so with only minor burns to his hands and feet is quite another.

And it’s the moment that will forever define what was actually quite a dramatic race in its own right, for the right reasons beyond that incident.

Lewis Hamilton had led away at the start while team-mate Valtteri Bottas bogged down, a sign of things to come for the Finn as he plummeted to sixth behind Max Verstappen, Sergio Perez and Alex Albon.

Lando Norris made a good start to run fifth but then found himself sandwiched between cars and damaged his front wing, before Grosjean cut across the front of Daniil Kvyat out of Turn Three, initiating contact that caused his horrific accident.

“It was a scary moment,” Kvyat said. “At first I was really angry that he came across like this, I thought what is he doing? But then my mind changed immediately when I saw in my mirrors the fire. I was just hoping he was OK. I didn’t like what I saw in my mirrors and I’m glad he is OK. It just reminds you what we do is dangerous.”

The race was immediately red flagged and Grosjean received immediate attention from Dr Ian Roberts and Alan van der Merwe in the following FIA Medical Car. He was taken to the medical centre and then airlifted to hospital where he was diagnosed with minor burns but no broken bones after X-rays.

The stoppage was over an hour as the wreckage was cleared and failed barrier replaced by concrete blocks, leaving the drivers in the pit lane trying to avoid repeat replays of the Haas exploding into flames as it pierced the barrier, and slo-mos of Grosjean suddenly emerging into the arms of the FIA’s Dr Ian Roberts.

Damage could be repaired and tyres changed if teams wanted to, so Norris got a free fix of his front wing and his team-mate Carlos Sainz – the only driver to take the original start on soft tyres – was joined by Kvyat in running the same compound. But Kvyat’s plan didn’t work out as he was involved in another incident on the restart, diving down the inside of Lance Stroll at Turn 8. Stroll turned in for the apex and as much as Kvyat cut the corner to try and avoid contact, it was inevitable.

Stroll was flipped upside-down and the Safety Car was immediately deployed, with a driver scrambling from his cockpit for a second time.

Bottas had lucked into a fourth-place restart position – a new grid set from earlier timing sectors on the first lap, when he’d ended up sixth – but then picked up a puncture and had to pit under the Safety Car, dropping to the back. That left Hamilton and Verstappen to fight it out as they eased away from Perez in third once the race resumed.

“The first start was really great and when you get a start like that you always hope that you can just keep going – but then obviously the red flag came out,” Hamilton said. “And then to go back into it, we were behind the Safety Car and it was quite slow. The Safety Car was driving really slow – not really quite sure what happened, so our tyres would have been at a lower temperature, and so it was definitely a slightly different second start – but the second start was also spot-on.

“After that it was generally trying to build a gap to Max but he had great pace, so in the early stages it definitely wasn’t particularly easy to do that.”

Verstappen kept Hamilton in range, never dropping more than five seconds back and at times closing the gap. While it looked like Hamilton had things under control, the strategies diverged as Hamilton did his second stint on medium tyres – pitting first – while Verstappen went for hards, and when the Red Bull pit for a second time an undercut chance was possible, but a slow stop scuppered his hopes.

“I think we were trying to keep the pressure on, but I think we didn’t do a good job with the strategy today,” Verstappen said. “We had the tyres to be more aggressive and we didn’t do it. First stop we should have pulled Lewis in, instead of Lewis pulling me in. so, I don’t know what was going on there. I had the hard tyre, and then after that first stop… I think it was the right tyre to be on because initially I gained a bit back on Lewis, of course because he was just bringing his tyres up to temperature a bit slower.

“With the harder compound you can push a bit harder on them initially, and then you just lose out, with that 1.5-2 seconds you lose over a lap, stopping a lap later and, of course then my second stop wasn’t good.

“I don’t know exactly what happened there but we’ll look into that – so then you are even further behind but we were always like four seconds behind and with whatever we did wrong today, that’s just very costly. I don’t think we had the better pace but we could have done a better job with putting them a bit more under pressure and, yeah, we didn’t do it.”

Despite getting the gap down to three seconds, Verstappen knew the game was up and made a late third stop to secure the fastest lap, emerging a few seconds ahead of Perez in third.

At that stage, the Racing Point had been cruising to a podium, holding off Albon with relative ease in the same way Hamilton had Verstappen covered. But then disaster struck three laps from the end as an MGU-K failure caused a fire and took him out of third place.

Perez said afterwards that Grosjean’s crash put such a disappointment into perspective – “what’s one more trophy?” – but the team’s second retirement was gleefully enjoyed by not only Albon but the McLaren pair behind him.

Lando Norris made two strong starts and could run in clean air for most of the race, while Carlos Sainz was as aggressive as Verstappen wanted Red Bull to be, starting on softs and making moves in the first stint before switching to the medium and hard compound at his two stops. That negated a ruined set of mediums from qualifying, and after outpacing Renault the final result of fourth and fifth moved McLaren comfortably clear of Racing Point in the constructors’ championship. 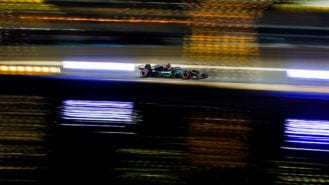 Norris did have a scare when a marshal ran across the track in front of him to try and put out the Perez fire, but that was luckily a short-lived issue as the Safety Car was deployed, neutralising the race for the final three laps. That also saved Pierre Gasly, who remarkably one-stopped after the red flag with two stints on hard tyres, and was dropping from being ahead of the McLarens to potentially as low as tenth before the Safety Car intervention.

Daniel Ricciardo had to settle for seventh as a result, leading home Bottas, Esteban Ocon and Charles Leclerc as Ferrari struggled for pace throughout the weekend – exemplified by Sebastian Vettel describing the car as “undriveable” as he faded from points contention.

But performance struggles were put into perspective by the opening few seconds of the whole race, as Guenther Steiner reflected as the floodlights started to slowly switch off: “The overriding feeling is we got lucky, an angel was with us in my opinion.”