Even an eternal optimist would have struggled to see the dramatic conclusion of the British Grand Prix coming — despite the lessons learned from Austria.

At the season-opener, a well-timed Safety Car mixed up the field and eventually saw Lewis Hamilton drop off the podium in a chaotic final few laps. Like the Red Bull Ring, Silverstone is hosting two races in a row this year, and like the Red Bull Ring, it also opened up with a thrilling finale to round one.

Hamilton had just two miles left of a race he’d led from the start when his tyre failed on the final lap. As smoke poured from the disintegrating rubber, a charging Max Verstappen was in the process of setting the fastest lap of the grand prix in second place, closing down the stricken Mercedes.

It was a scene that cried out for a crowd on their feet, with a soundtrack of gasps and encouragement from the grandstands, but the living room scenes of TV viewers were not hard to imagine, as Hamilton limped to a narrow seventh British Grand Prix win.

The race started with a collision between Alex Albon and Kevin Magnussen, with the latter ending up with three wheels in the gravel trap at the final corner. Magnussen had hit the kerb on the inside of Club and run wide, allowing Albon a chance but the gap was always closing and the contact earned him a five-second time penalty.

“By the time I saw him it was way too late for me to really give him any room, I think it would have been very easy for him to be able to wait – he had a way faster car and he would have easily gone past me anyway,” Magnussen said. “Clearly there weren’t any bad intentions from him, just a misjudgment.”

Albon had already stopped for hard tyres when the rest of the field followed suit under the Safety Car, brought out due to a spectacular crash for Daniil Kvyat. The Russian lost control entering Maggots at high speed, the car snapping away from him in peculiar fashion and suffering a heavy impact against the barrier.

Given the strange location of the incident, it took six laps to clear the car, giving the whole field the chance to pit for hard tyres and run to the end. The only driver not to do so was Romain Grosjean who stayed out on mediums, but it was a gamble that wouldn’t pay off.

Like Austria, there seemed little chance for significant action given the fact that all cars were on the same strategy, but the final laps would prove enthralling once again.

The first signs came when Valtteri Bottas – who had been keeping Hamilton honest and within two seconds for much of the race – started to fade back towards Max Verstappen. The Red Bull was already more competitive in race trim but over ten seconds adrift until the final six laps, and with four remaining Verstappen suddenly made a big gain. Then it became apparent why, as Bottas went wide at Village with a flat front left tyre.

“Of course really disappointing, and very unlucky,” Bottas said. “Also where I got the puncture, I had to go round the whole lap.

“We knew it would be a long stint with the hard tyre, so of course I was trying to put pressure on Lewis. Towards the end, I was starting to get more and more vibration. I reported that and then in the end, I had in my mind, ‘who knows there could be an issue?’, so I started to manage it a bit. But it happened so suddenly, I couldn’t predict it happening.”

Hamilton soon got the message not to go for the fastest lap because tyre integrity was the overriding factor, and he acknowledged the call just as Verstappen pit for a fresh set of softs. With two laps remaining, the move was two-fold as he went in search of the extra point himself but it also covered off against a similar failure.

Mercedes opted against taking such a precaution, instead believing Hamilton could nurse his car to the finish as he had not complained about his tyres at that point. Five corners into his final lap, that changed.

“Until that last lap everything was relatively smooth sailing,” Hamilton said. “The tyres felt great, Valtteri was really pushing incredibly hard, and I was doing some management of the tyre and he looked like he wasn’t. When I heard that his tyre went, I was just looking at mine and everything seemed fine, the car was still turning no problem so I was thinking maybe it’s OK.

“Those last few laps I started to back off and down the straight it deflated and I just noticed the shape just shift a bit. That was definitely heart in the mouth feeling because I wasn’t quite sure it had gone down until I hit the brakes. And then you could see the tyre was falling off the rim.

“I was just driving it trying to keep the speed up. Sometimes it will take off and break the wing, I was just praying it would get round and it would not be too slow, I nearly didn’t get round the last two corners. But thank God it did. I really owe it to the team, but ultimately we should have stopped towards the end once we saw the delaminations.” 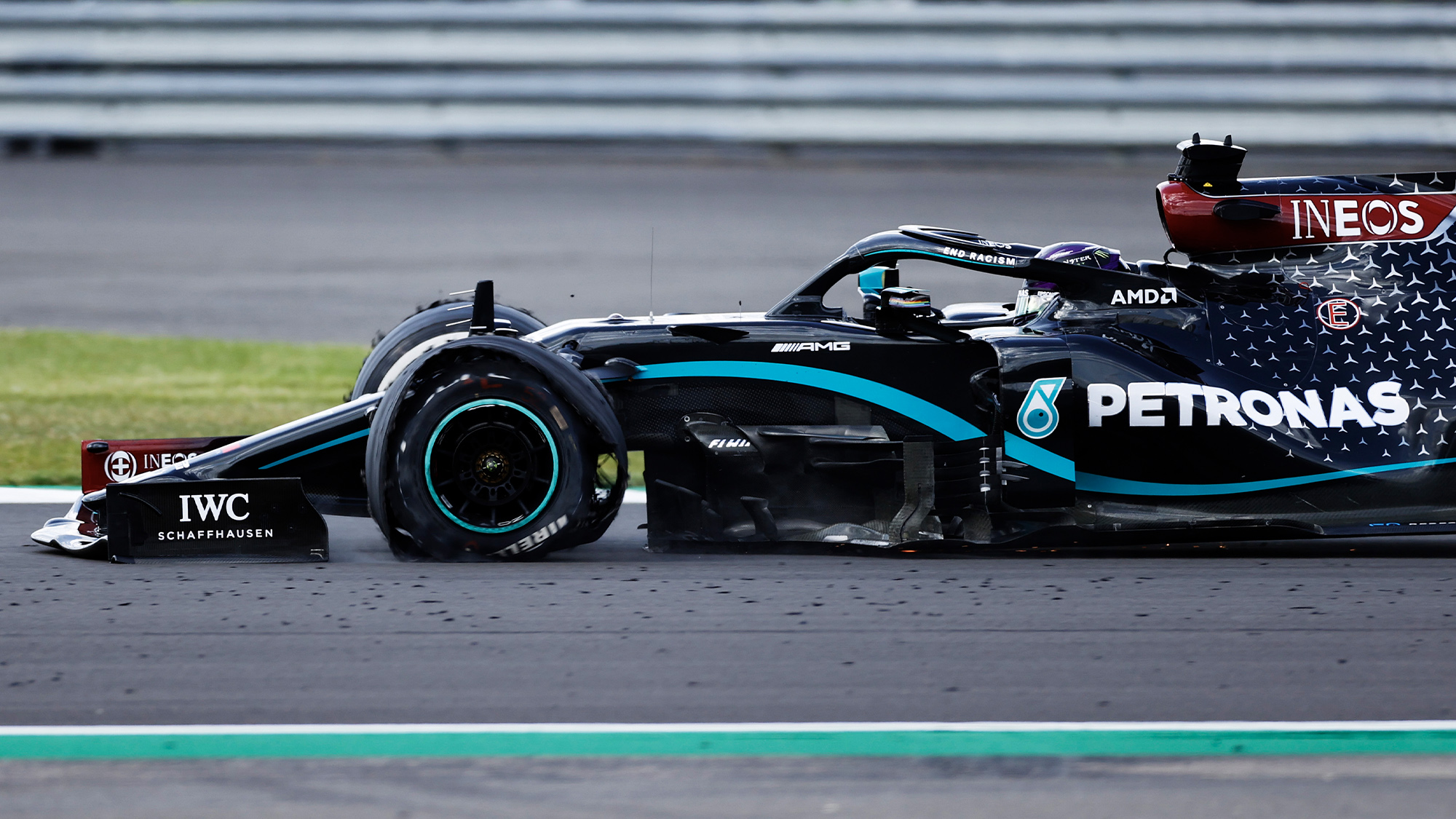 Suddenly, a race that had looked like an absolute cruise for Hamilton gave way to an edge-of-your-seat climax. He had a little over two miles to go on three wheels, while Verstappen was on soft tyres and in the process of lighting up the timing screens.

Hamilton kept the tyre in shape and was able to three-wheel his way to the final sector, with a 30-second advantage being erased in huge chunks. Verstappen could see the Mercedes as he exited Stowe, but it wasn’t to be enough as Hamilton limped across the line less than six seconds before Verstappen set the fastest lap.

“As the minutes go by I feel worse and worse when I realise what just happened!” Hamilton said when he had time to process the finish. “In the heat of the moment you have the adrenaline flowing and I’m guessing that fight for survival instinct comes out and I was able to stay calm and really measured and try to bring the thing home, but of course I’m just sitting here thinking of all the things that could have happened. If the tyre gave up in a high-speed corner it could have been a much different picture, so I feel incredibly grateful that it didn’t.”

While Hamilton was left to question why Mercedes didn’t pit him before the final lap, with hindsight, Verstappen could be forgiven for asking the same of Red Bull. Yet in a sign of his growing maturity, he backed the call to pit and would not let anyone retrospectively analyse the late pit stop.

“It’s always easy to say afterwards but I think we were also lucky today that Valtteri had that puncture, so we gained a position,” Verstappen said. “So I’m actually not disappointed at all or anything. Once Valtteri had that puncture I thought ‘OK this is an easy P2’ so we just pit for new tyres and make sure, because I was also not sure what was going on with my tyres.

“Normally when you see other cars getting punctures and you pitted on the same lap you think it might happen to you as well, so you don’t want to have that problem. Lewis had his puncture but that’s also unlucky, it could have been lucky for me but unlucky for Lewis. In the end it is what it is and I’m very happy with second.”

Verstappen’s comments were vindicated when the team discovered around 50 small cuts on his tyres that came off the car at the pit stop, suggesting he too would have struggled to make the finish.

The Dutchman also conceded it was “a very boring race for me” as he ran a lonely third for much of it, but the battle for fourth – which became the final podium spot late on – was more captivating. Charles Leclerc held position at the start and was backing up the field in the opening laps but was far more competitive after the switch to hard tyres, and gained the benefit of Grosjean’s strategy gamble placing the Haas between himself and the chasing McLarens.

Once Carlos Sainz cleared Grosjean he didn’t have the pace to close down Leclerc, and the Ferrari driver benefitted from Bottas’ issue to take a surprise second podium of the season.

“We know we’ve been lucky to get to the podium but, apart from that, we’ve been satisfied with the way we’ve been working throughout the weekend,” Leclerc said. “For sure we don’t want to be fighting for fourth place for so long, but, at the moment, that’s what the car is capable of.

“I think we extracted absolutely everything out of the strategy and the car. I’m very happy, it’s a very unexpected podium, so I’m more satisfied than last year with third place. 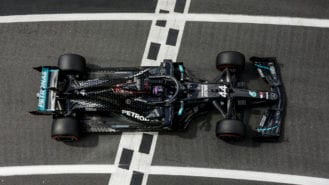 The two principal car requirements of Silverstone are aerodynamic efficiency and horsepower. And so, obviously, you didn’t need to look beyond the Mercedes W11. The team’s recent Silverstone record was…

“It was not easy, we had a very aggressive downforce level coming here, so we had quite a lot of speed down the straights, but it was very difficult in the corners. We were quite worried for the race, especially for the tyre degradation, but we did quite a good job on that.”

Sainz might have put pressure on the Ferrari in the final laps but he too suffered a front left puncture and was demoted out of the top ten, promoting Daniel Ricciardo to his joint-best Renault finish in fourth after an afternoon hunting down and passing both Lance Stroll and Lando Norris.

While Norris would finish fifth – retaining fourth in the drivers’ championship as a result – Stroll would fade to ninth place behind Esteban Ocon, Pierre Gasly and the recovering Albon. He was spared any further pain as Sebastian Vettel’s troublesome weekend yielded a solitary point in tenth as Bottas just failed to score.

Still, it could have been worse. Nico Hülkenberg’s impressive return to the cockpit came to a crunching halt on Sunday as Racing Point discovered a gearbox or power unit issue as the car was fired up to head to the grid, with the drivetrain seizing and the substitute failing to make the start.

The second Austria race might not have quite matched the drama of the first, but next weekend Silverstone has the added twist of softer tyre compounds that will mean Sunday’s conclusion will give plenty of engineers sleepless nights over the coming days.