Times and perceptions change. I remember when, in 1979, Imola first hosted the Dino Ferrari GP non-championship race in order to qualify for full world championship status the following year. Back then, with talk of the Italian GP alternating between Monza and Imola going forward, nobody raved about a track many viewed as a bit dull. The thought of it pinching the Italian GP from Monza, the Temple of Speed, was almost sacrilegious. For the record, Niki Lauda’s Brabham-Alfa won it, ahead of Carlos Reutemann’s Lotus.

To today’s drivers though, Imola is ‘awesome,’ a real old school track packed with history. You’d think we were back at Nürburgring’s Nordschleife! Of course, it didn’t steal the Italian GP and instead hosted its own San Marino GP between 1981 and 2006.

It certainly is an interesting track by modern day standards and in a gloriously picturesque setting. As for the history, can that awful ’94 weekend etched indelibly in the mind, really be 26 years ago? Can it really be 14 years since myself and a couple of colleagues enjoyed a great pasta supper with Sabine Kehm, talking discreetly about Michael Schumacher’s last season at Ferrari, his thoughts and perceptions of rivals, things F1 and otherwise. Surely that was five years ago? But then someone tells you that the only current driver racing that weekend was Kimi Räikkönen. The mind plays funny tricks…

Back in the present Imola presented F1’s finest with a new challenge: a two-day weekend with no Friday practice due to the logistics of the long schlepp up from Portimao – another venue you’d love to see on the calendar permanently.

For the second time in three races Valtteri Bottas has taken pole, the 15th of his F1 career, beating Lewis Hamilton to the honour. As ever, it was tight. Bottas headed Hamilton by eight milliseconds in Q1, by six-hundredths in Q2 and then a veritable chasm, a whole tenth of a second, in Q3 after Lewis had been quicker after their first runs.

“I really enjoyed the track,” Valtteri said. “I had to improve on that last run and managed to find those small gains. It’s a great feeling when you do that!”

He was taking nothing for granted though: “It’s one of the longest runs to Turn One on the calendar and no doubt Lewis and Max [Verstappen] will be chasing me.” And, given the difficulty of overtaking at Imola, with even more urgency than normal.

Hamilton was a bit down on himself and wouldn’t have boosted ticket sales if indeed the promoters had been allowed to sell any: “It wasn’t a great lap from myself… I’m pretty certain it will be a boring race tomorrow because you can’t follow.”

Verstappen, meanwhile, was happier to look at the positives after it looked for all the world as if he would miss out on Q3 when his Red Bull needed a spark plug change at the start of Q2. But, in a year when the crew has impressed so much with the job on the grid in Hungary and so many sub-2sec race pitstops, they responded again: a job that would normally take 15 minutes was done in five and Verstappen still had the confidence to do his last-minute single Q2 run on the medium tyre. Along with the Mercs that is what he will start on after going through to Q3 sixth and then qualifying third, almost half a second down on Hamilton.

“I only did two laps on the soft in Q1 and going through on the medium didn’t give me much of a reference. There wasn’t much grip on my first Q3 run and although I expected to be a bit closer, it’s not bad in the circumstances.”

Pierre Gasly has been confirmed as an AlphaTauri driver again in 2021, and why wouldn’t he be? Unless of course he’d been promoted back into the senior team. The Frenchman has turned in some fabulous 2020 drives and is in a rich vein of form. If his team’s early year Imola running with an older chassis and a filming day with the current one has helped in terms of data at an event with limited practice, then Gasly has taken full advantage.

He was fifth in Q1, slower only than the Mercedes twins in Q2, and lines up on the second row of tomorrow’s grid after his best-ever qualifying performance. All the way through he had two to three tenths in hand over team-mate Daniil Kvyat, who nonetheless also did a strong job to qualify eighth, ahead of the McLarens.

Just 0.02sec slower than Gasly, Daniel Ricciardo drove what he described as his best lap of the year to put the first Renault fifth on the grid, 0.05sec ahead of Alex Albon with the second Red Bull. Team-mate Esteban Ocon was a quarter of a second adrift in Q2, which meant he didn’t make Q3 and starts 12th. Ricciardo’s lap though, means Renault is well-placed to make gains in that oh-so-close midfield scrap: the McLarens are behind him and neither Racing Point made it into Q3.

Charles Leclerc did a great job to be fourth quickest in Q1 with the first Ferrari, just a tenth behind Verstappen, and had the confidence to head out on the yellow-walled medium Pirelli in Q2. He found himself right on the cusp with that, however, and was forced to swap to the soft for his second run.

That got him through in a session that was unbelievably tight: Leclerc, seventh, was separated from Perez, 11th and eliminated, by just five-hundredths! He was ultimately disappointed to line up seventh when he’d been targeting fourth. 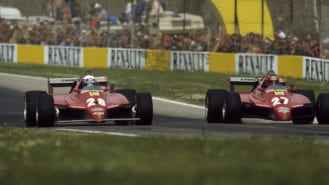 F1 at Imola: controversy, brilliance and the bizarre

Imola only hosted its first Formula 1 championship race in 1980, and hasn't held one for 14 years, but the circuit, in the Emilia Romagna region of Italy, has witnessed…

Further back, Sebastian Vettel was just over three-tenths adrift of his team-mate in Q2, which translated to 14th on tomorrow’s grid, behind George Russell who put together another superb lap. The good news for Russell fans is that the talk of Perez in his seat for 2021 has abated, with Williams acting team principal Simon Roberts confirming both his current drivers for next year at Imola.

“I’m quite happy with the gap to Max,” said sixth-quickest Albon, “Another tenth would have been P4.” Which was true enough, but that gap to Verstappen was still 0.4sec and whether that’s close enough for Red Bull remains to be seen.

Christian Horner said in Portugal that a decision on his team’s 2021 driver line-up would likely be made in two or three weeks and so, after a tricky Portimao, Albon needs to deliver at Imola. With stories elsewhere suggesting that Verstappen supports Nico Hülkenberg’s candidacy for a Red Bull seat to best fight Mercedes in 2021, time could be running out for Alex.

If Albon does lose out, it would be fascinating to see a head-to-head with Gasly at AlphaTauri which might just confirm that, as many suspect, Verstappen could be Senna-quick and four-tenths faster than anyone! Honda protégé Yuki Tsunoda continues to be mentioned for AlphaTauri too, despite Honda pulling out at the end of next year.

In papaya orange, meanwhile, it was Lando Norris’s turn to get the better of Carlos Sainz this time, by a tenth, as the Woking cars closed out the top 10.

It is pretty much a formality that Mercedes will seal a new record seventh consecutive constructors’ championship win tomorrow (they currently share six with Ferrari’s 1999-2004 run) as Red Bull needs to outscore them by 35 points to prevent it. And it looks unlikely that anyone driving anything other than a Merc will win the race. But while Imola has hosted some fairly soporific races over time, let’s just hope that Lewis is wrong about this one! 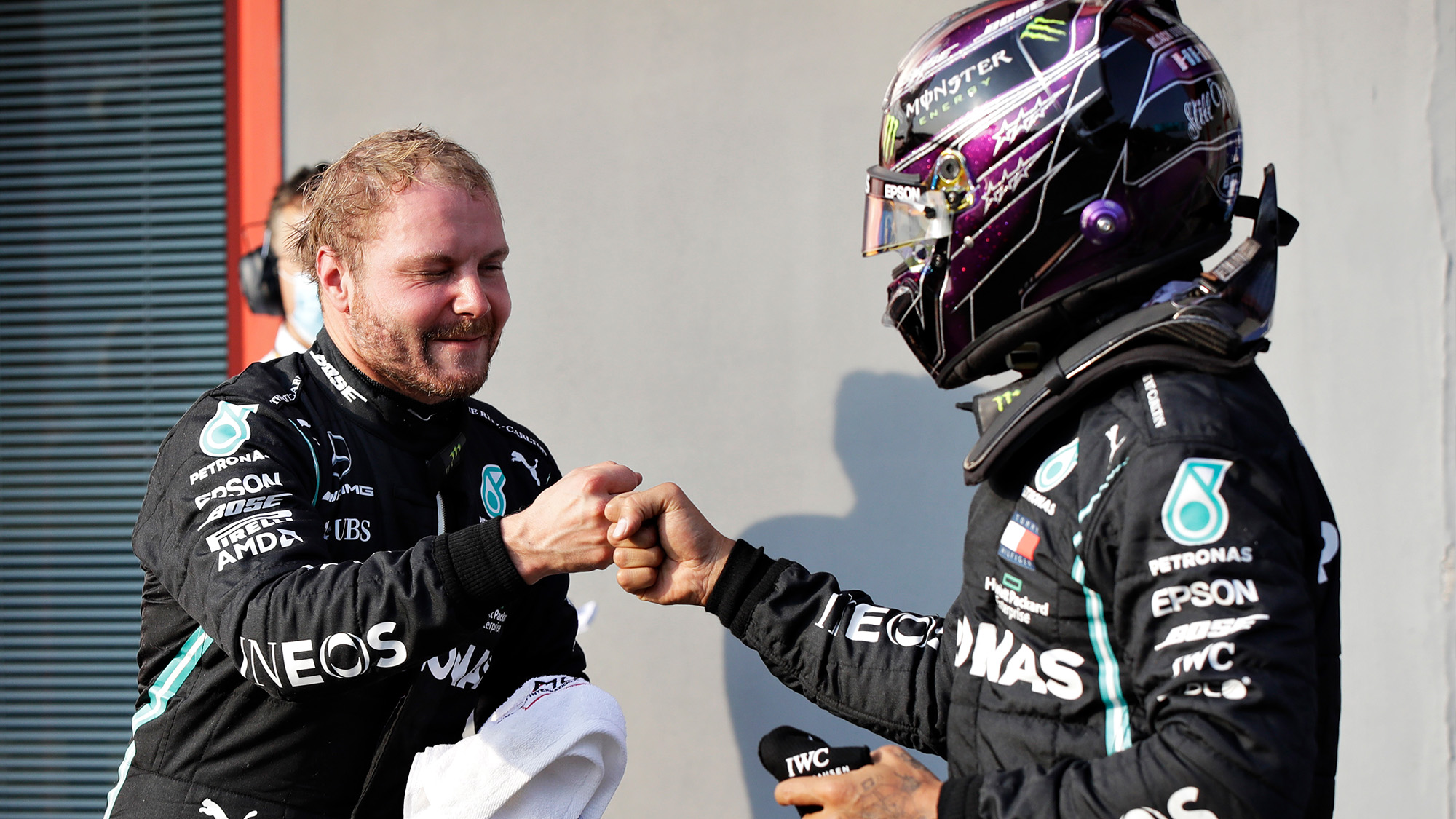