Valtteri Bottas left nobody in any doubt as to quite how satisfying it was to beat Lewis Hamilton to Silverstone pole for the second time in the last three visits. Pondering a three-tenths deficit last weekend, Bottas’s 1min 25.154sec lap this time left Hamilton trailing by six-hundredths.

Bottas had actually inked his newly-announced Mercedes 2021 contract extension before the British GP, so it wasn’t down to any additional confidence of job security.

“I’m just really pleased with that,” he nodded. “I got everything out of the car and myself.”

The story of the day? Undoubtedly Nico Hülkenberg third on the grid for Racing Point

You might have expected that would translate into quicker lap times, not slower, but the teams’ suspicions that the red-walled C4 might struggle over a complete lap of Silverstone proved well-founded. The softs were prone to overheating by the time they negotiated the high-speed Maggotts / Becketts /Chapel section, giving inferior performance in sector three. Both Bottas and Hamilton used the soft for their first Q3 runs and then switched to the mediums to set their quickest times.

As for the race, the preferred option among the top 10 was to run the medium in Q2, avoiding the soft, which is unlikely to be a suitable race tyre and which the teams all burned through in Friday practice, saving as many sets of mediums and hards for qualifying and race.

All with the exception of Max Verstappen, who managed to get his Red Bull through Q2 – which of course dictates your starting tyre – on the hard compound. Provided he can get it off the line without losing out too badly, that should open up some interesting strategic flexibility.

“It depends upon safety cars,” Verstappen said, “but at least it’s different from what the others are doing.”

With the hotter predicted temperature and softer compounds, Hamilton doubts the feasibility of a one-stop race, at least with the downforce generated by the Mercedes W11. Especially as Pirelli’s Mario Isola pointed out that pole position was 1.2sec quicker in the British GP than the 2019 race and attributed last weekend’s tyre dramas to long 40-lap stints, wear from the speeds and greatest loads ever generated by F1 cars, exacerbated by weakening from cuts. To assist with the latter, the FIA has installed a new 30m section of kerb where drivers were running off and coming back on between T13/14 in the high-speed section.

You have to wonder though. The pole time itself is somewhat irrelevant as it is just one lap and, last weekend, Hamilton ran laps 12-19 at slow speed behind the safety car and then backed off three from the end, so a hard 30-lap stint is more accurate. He ran a similar stint on the same tyre in 2019 at a comparable pace and was able to go two seconds quicker on his worn tyres at the end to claim the fastest lap point!

Admittedly, that was on the hardest C1 compound — unavailable tomorrow —but it’s worth pointing out that Romain Grosjean got 36 laps out of a set of mediums last weekend. So, with higher minimum tyre pressures mandated this weekend to assist sidewall integrity, don’t rule out someone trying a one-stopper and increasing heart rates down at Pirelli.

At the quicker end of the grid – relatively speaking – Ferrari, with inherently less downforce might just give it a go. Further back, a team like Haas, with less to lose and more to gain and a fondness for alternative strategies, might give it a whirl too.

The story of the day? Undoubtedly Nico Hülkenberg third on the grid for Racing Point. Tensions have risen in the paddock over the FIA’s €400,000 fine and the docking of 15 championship points for the team in the constructors’ championship for infringing the design process over its rear brake ducts.

As it stands, five teams have appealed the verdict. Original protesters Renault have been joined by Ferrari, McLaren and Williams who insist that the penalties are too lenient – 15 points amounts to one third-place finish over the season and Lawrence Stroll probably has 400k in his back pocket.

And Racing Point themselves are due to appeal. Adamant that they have done nothing wrong, they want to clear their name. The bigger picture, of course, is money. Has such dedicated copying gone too far? Should they still be regarded as constructors? And should they receive the financial benefits of a constructor? 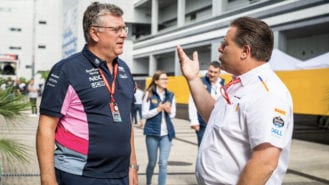 In the paddock, it has turned personal. McLaren boss Zak Brown labelled Racing Point’s proclamation that they have only used photographs to copy other parts of the car as “BS.”

Racing Point’s Otmar Szafnauer retorted: “To Zak Brown it’s BS because he’s not an engineer. He’s got no idea what he’s talking about. Zero. I’m surprised at how little he knows about the rules of F1. It seems to me he knows more about historic racing than he does about F1.” Ouch…

Whatever the rights and wrongs, other team bosses are angered at the brass neck Racing Point has displayed in going quite as far as it has. But ironically, half the paddock would love to see Nico Hülkenberg finish on the podium, provided his neck holds out.

Even Max Verstappen, fourth quickest, is supportive: “I’m very happy for Nico. He should already be on the grid. I hope it gives him a seat for next year.” And, as one paddock wag put it, referring to Hulkenberg’s undeserved and unenviable record of 177 F1 starts without ever standing on the rostrum, “the poor lad has started more races without a podium than anyone since Dick Dastardly…”

Daniel Ricciardo’s smile is in full beam this weekend. With a more co-operative rear end on the Renault, which is also feeling more comfortable on the medium tyre, he shocked with third quickest time in P3 on Friday and backed it up with fifth place on the grid.

Lance Stroll managed sixth but 0.34sec behind Hulkenberg. Which will serve only to prompt more pondering about how quickly the pink car might go with Sebastian Vettel in it, although not necessarily at Silverstone, where Vettel has a six-seven qualifying deficit to his team mates over his F1 career.

Pierre Gasly, fabulous for Alpha Tauri last weekend, excelled even more this time, qualifying seventh, in direct contrast to team mate Daniil Kvyat, who had a time deleted and went out in Q1.

Charles Leclerc could not match last weekend’s heroics in the Ferrari and qualified only eighth. “Strategy might be a thing,” he said, “but we are seeing more degradation and having more trouble managing the tyres. We shouldn’t expect a podium. This time, I think, is a more realistic picture,” he offered, candid as ever. Vettel, the best part of four-tenths away in Q2 and starting 12th, no doubt concurred.

Alex Albon lines up ninth, the best part of half a second shy of team-mate Verstappen. He was happy with his sixth quickest Q2 lap on mediums but was grimacing after Q3. “It was tricky. You go out and it’s always something different. I couldn’t improve on new softs versus old mediums.”

For the first time in 2020 McLaren failed to get two cars into Q3. Lando Norris starts 10th and Carlos Sainz, a couple of tenths away in Q2 after a prep lap that wasn’t ideal, lines up 13th.

It might be the same stage and the same actors as one week ago, but tomorrow’s performance promises to be different. And whatever the paddock commotion, I can’t help but wish for a starring role for The Hulk.

*Driver will move back three places due to a penalty 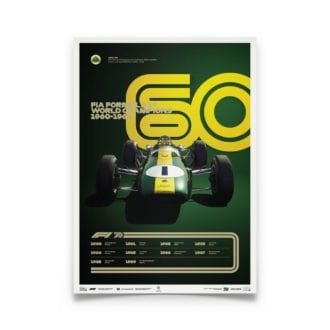