Valtteri Bottas is enjoying something of an Indian summer. There was always a suspicion that Nürburgring’s low-grip, ‘green’ surface might play to his strengths, and so it proved.

Covid scheduling is what it is but Nürburgring in October was always going to be Bovril and beanie hats. When Pirelli formulated its 2020 compound range, nobody was thinking about 8-degree ambient and 14 degrees of track temperature, the conditions facing the teams as they prepared for FP3 on Saturday morning! Actually, it wasn’t FP3 but FP1, with all of Friday’s track time lost to low-lying fog which prevented the medical helicopter doing its job.

It was Bottas who coped best with the lack of grip to head Lewis Hamilton by 0.13sec in that session, a performance he improved upon in qualifying to beat Hamilton by just over a quarter of a second as he turned the timing screens purple in all three sectors.

“I think getting the tyre in the sweet spot on the prep lap was especially important,” Bottas said, “and it’s such a good feeling when you get it right on the last lap.” If ever the Mercedes DAS system was going to be an effective tool, it’s here.

You wonder how strong a weapon it might be in tomorrow’s race, with Hamilton admitting that tyre graining is likely to be an important factor in determining whether a one- or two-stop strategy is best. Or when marooned behind any potential safety car losing tyre temperature. 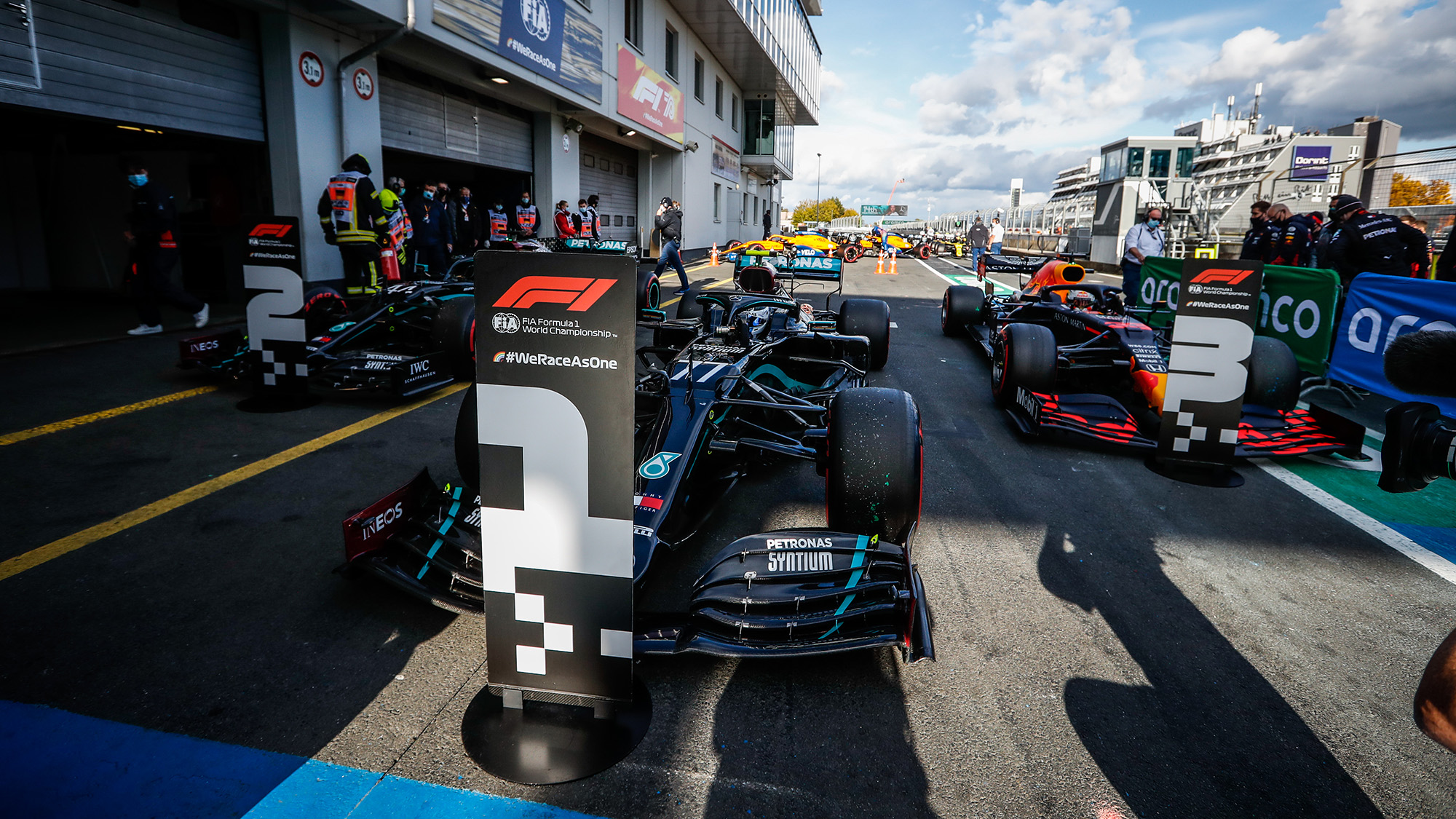 More cold weather is forecast for tomorrow and the Nürburgring outcome is more in the balance and difficult to read than usual. Max Verstappen, for instance, looked a genuine pole position threat in the Red Bull and ended up just 0.04sec shy of Hamilton’s front row time.

“I’m a little disappointed,” Max admitted. “In Q3 the car started understeering when it mattered and I grained the fronts.”

Charles Leclerc did a stand-out job to equal Ferrari’s best qualifying performance of the year with fourth quickest lap, pipping Alex Albon’s Red Bull to the second row by just a hundredth.

Leclerc even surprised himself: “I expected to struggle in the cold because we have in the past, but I got everything together and the upgrades we brought here [a new floor and barge boards] worked properly,” he explained. For the eighth successive race he outqualified Sebastian Vettel, who was half a second adrift in Q2 and starts 11th. 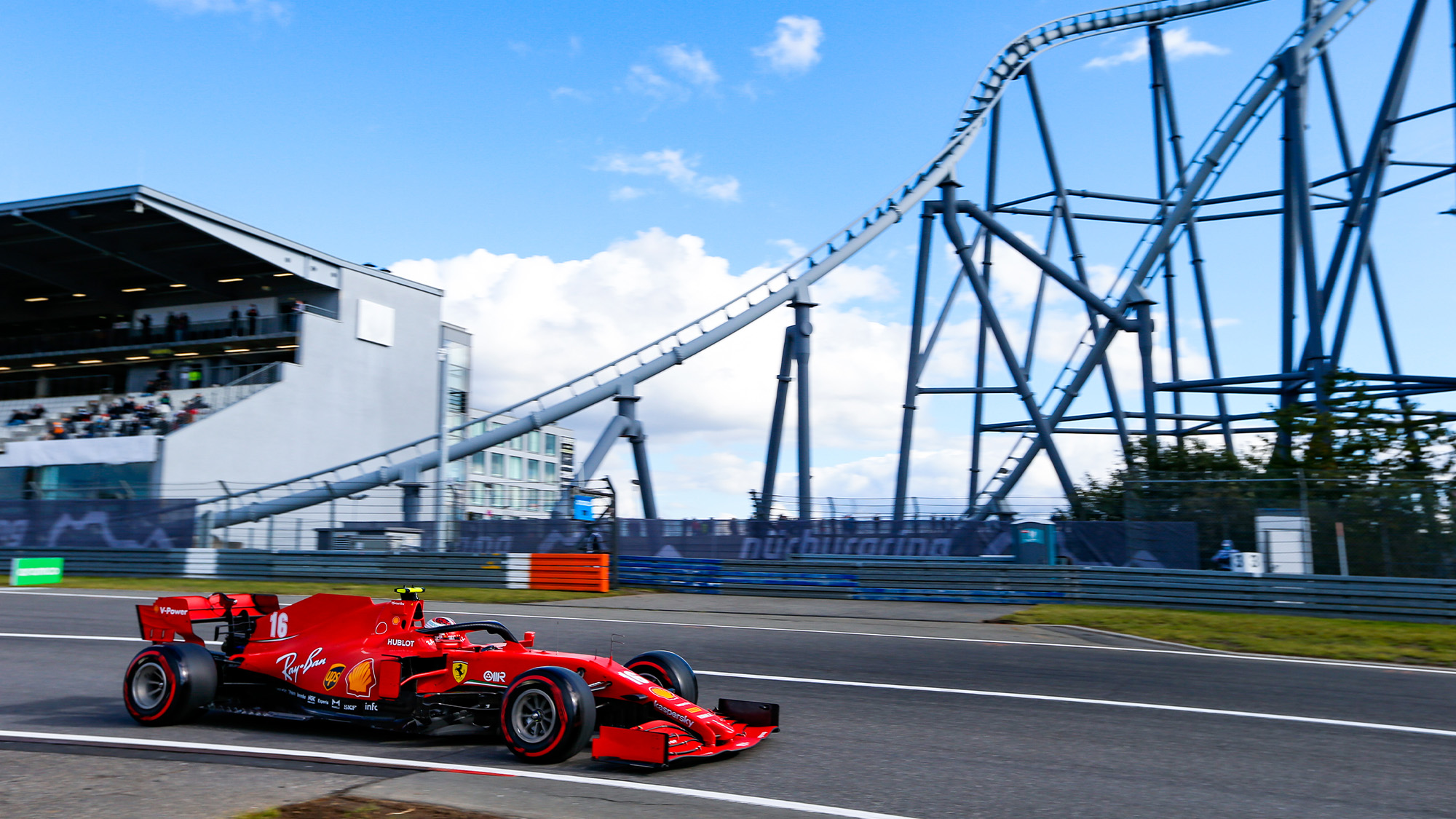 The gulf between Albon and Verstappen in qualifying remained, with Alex half a second down. The plan had been to try a different chassis with revised suspension mounting points to try to give Albon more the feeling he is after, but the loss of Friday meant that Red Bull had to revert to what they knew.

Daniel Ricciardo has had the better of Esteban Ocon at all but one race so far and maintained that advantage, albeit by a tiny 0.02sec margin. The Aussie admitted to a lock-up at the chicane, which cost him but probably not enough to have beaten Albon.

Ocon, meanwhile, was satisfied that recent Renault improvements, with better rear stability and traction specifically, also translated to relatively high downforce levels, the team having previously struggled at both Barcelona and Budapest.

It could prove important with the midfield battle as tight as it is. Heading into the Eifel weekend, McLaren is third in the Constructors’ Championship with 106 points, Racing Point has 104 and Renault, 99. 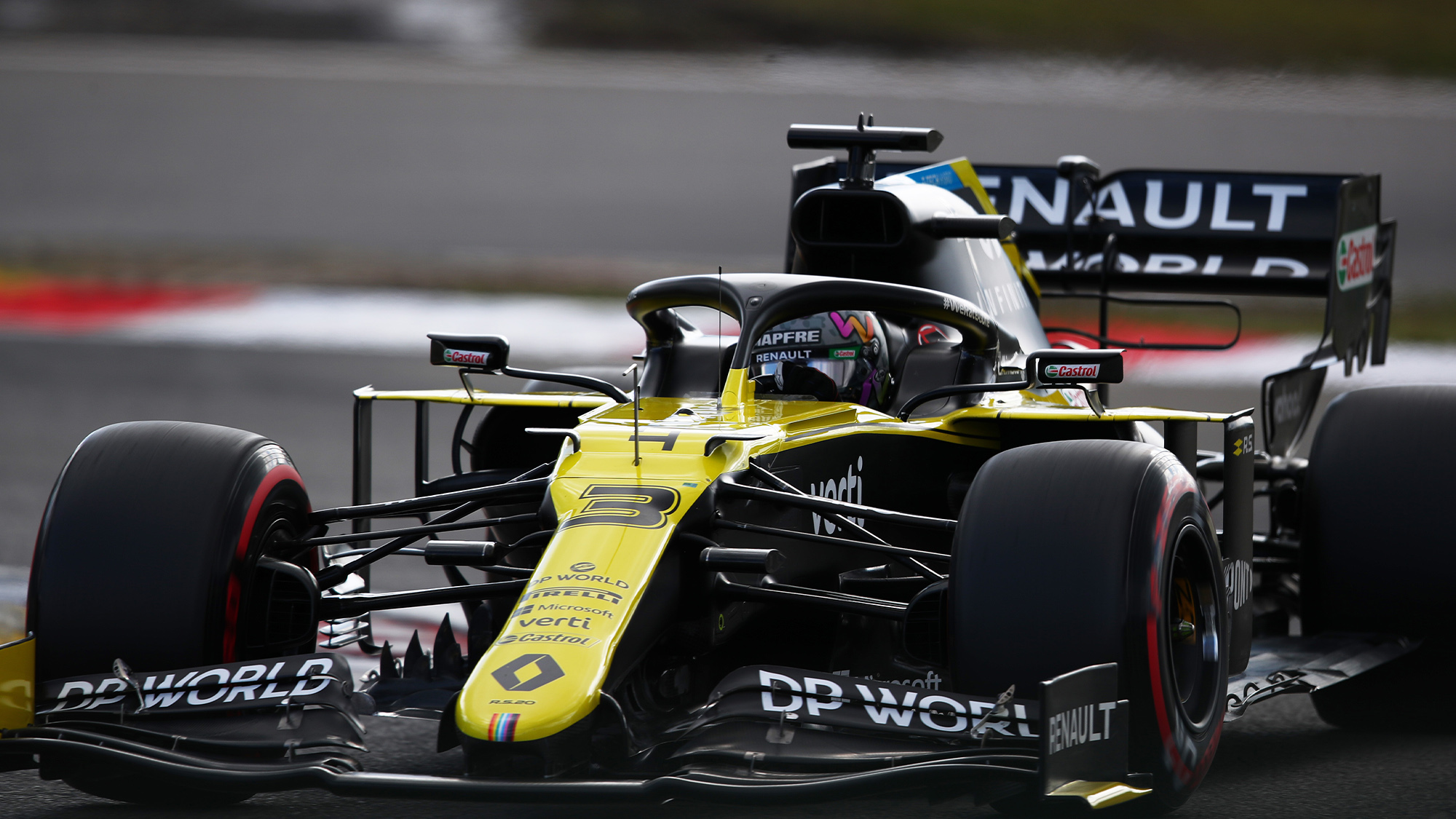 Those extra championship bucks are all to play for and it hasn’t helped Racing Point’s cause that Lance Stroll felt too ill to drive on Saturday morning (lavatory proximity the issue rather than any Covid-related symptoms).

It was just as well that Nurburgring is about an hour from Cologne, where Nico Hulkenberg was having a coffee with a friend when he got the call from Otmar Szafnauer. And that a couple of weeks ago he bought Keke Rosberg’s Porsche GT2 RS! He quickly jumped in and got his foot down. A second bout of super-subbing was on the agenda.

If Silverstone, where he was an 11th hour sub for Sergio Perez, had been a big ask, this was nigh on impossible. Turn up, jump in and go straight into qualifying without any kind of practice at all. Even Hulkenberg’s talents couldn’t magic anything out of that situation and he did an admirable job to lap within a couple of tenths of Kimi Räikkönen’s Alfa, going out in Q1 along with Kimi, the Williams twins and Romain Grosjean’s Haas. 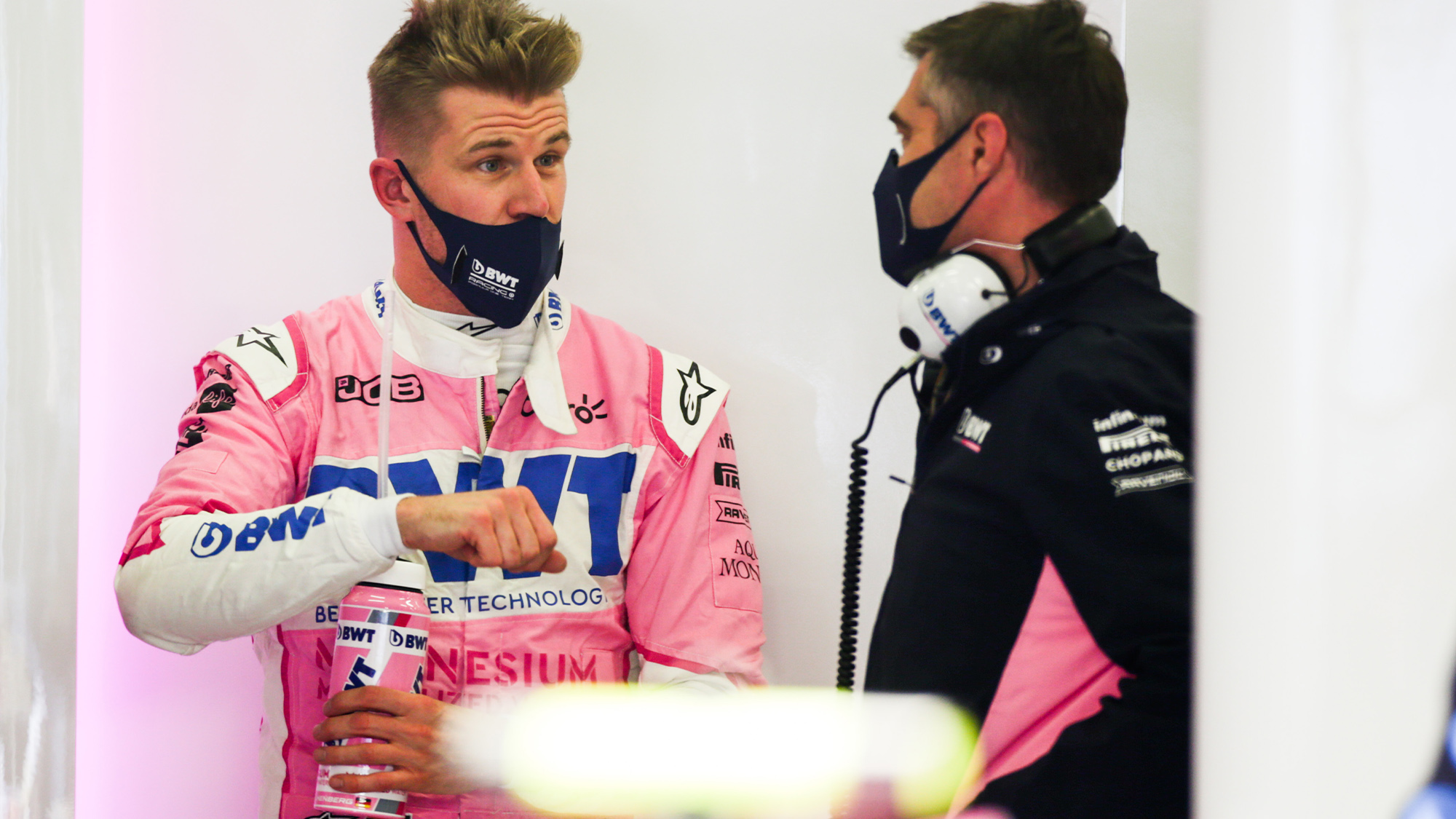 Hulkenberg completed reconnaissance, practice and qualifying in the same session

Perez was 0.9sec quicker in that Q1 session and ultimately qualified ninth, between the Lando Norris / Carlos Sainz McLarens. “We messed up a bit on strategy and went through with just a single set of softs for Q3, so we could be higher,” Sergio admitted, “But with nobody doing a long run the race is an unknown and anything could happen.” Often, when tyres are a critical variable, Perez does well, do don’t rule out a top-five performance tomorrow.

At McLaren, Norris had the benefit of a revised nose and aero upgrade in Sochi, so it was Sainz’s turn to benefit from an upgrade package here. But, without the benefit of Friday practice to optimise it, Carlos found himself on the back foot, a quarter of a second adrift of Norris. 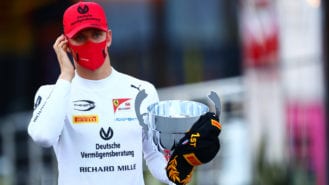 Alfa Romeo's second seat is a hotly contested one and in all likelihood, one of Ferrari's Academy Drivers will fill the space for the 2021 Formula 1 season despite experienced…

Outside the top 10 and behind Vettel’s Ferrari, Monza winner Pierre Gasly outqualified Alpha Tauri team-mate Daniil Kvyat by 0.07sec while Antonio Giovinazzi made it out of Q2 for the first time in 2020 and took the honours as quickest Ferrari-engined customer, a couple of tenths clear of Kevin Magnussen’s Haas.

Whether that is enough to retain his seat with a young 21-year-old called Schumacher waiting in the wings, is doubtful. Mick Schumacher was scheduled to have his first official Friday FP1 run in the Alfa, along with fellow F2 front-runner Callum Ilott at Haas, but amid Friday’s pea-souper they were both left all dressed up with nowhere to go.

This was supposed to be the lovely story whereby young Mick had his first F1 involvement at the race in which Lewis Hamilton equalled his Dad’s 91 F1 wins, and he was there to offer a congratulatory hand-shake (well, elbow-bump). But, with the first part of the tale spoiled, you have to wonder about Lewis’s role too. This one just could be two in a row for Bottas. And don’t discount Verstappen either. 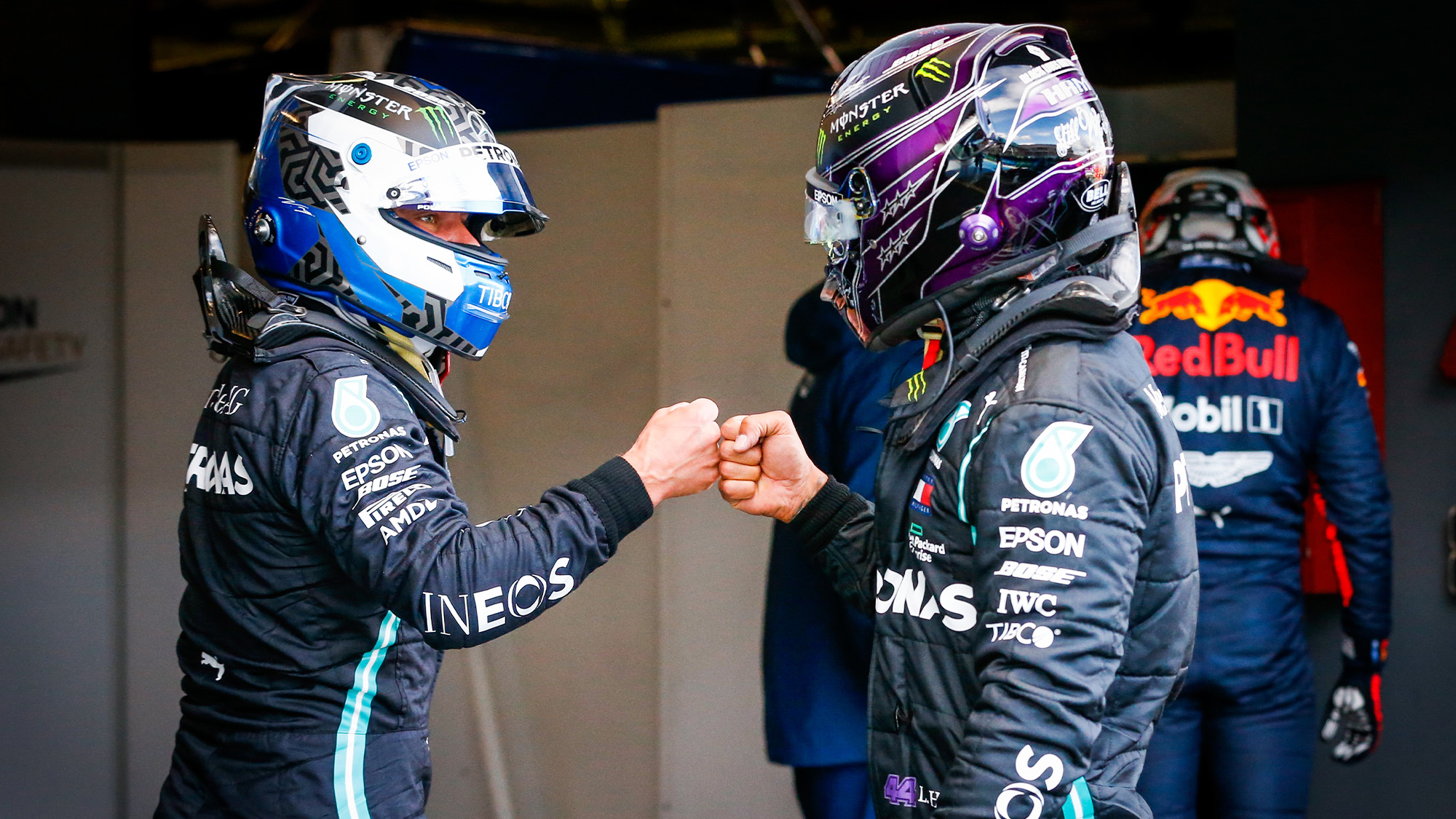