“I had a good start to get up alongside Valtteri and we both understeered into the first corner. I tried to obviously give as much room as possible. Then he was in my blind spot so I didn’t know where he was after that. So, I moved wide to the outside, he came back and did an amazing job. I remember coming out of that corner thinking ‘good on you, I’m impressed, that was good’.”

Lewis Hamilton knew he had a fight on his hands on Sunday when Valtteri Bottas dug his heels in for what feels like the first time against his team-mate. The Finn had already prevented him from matching Michael Schumacher’s record of Formula 1 victories a fortnight ago, but on this occasion it would turn out that Bottas’ bark was worse than his bite. 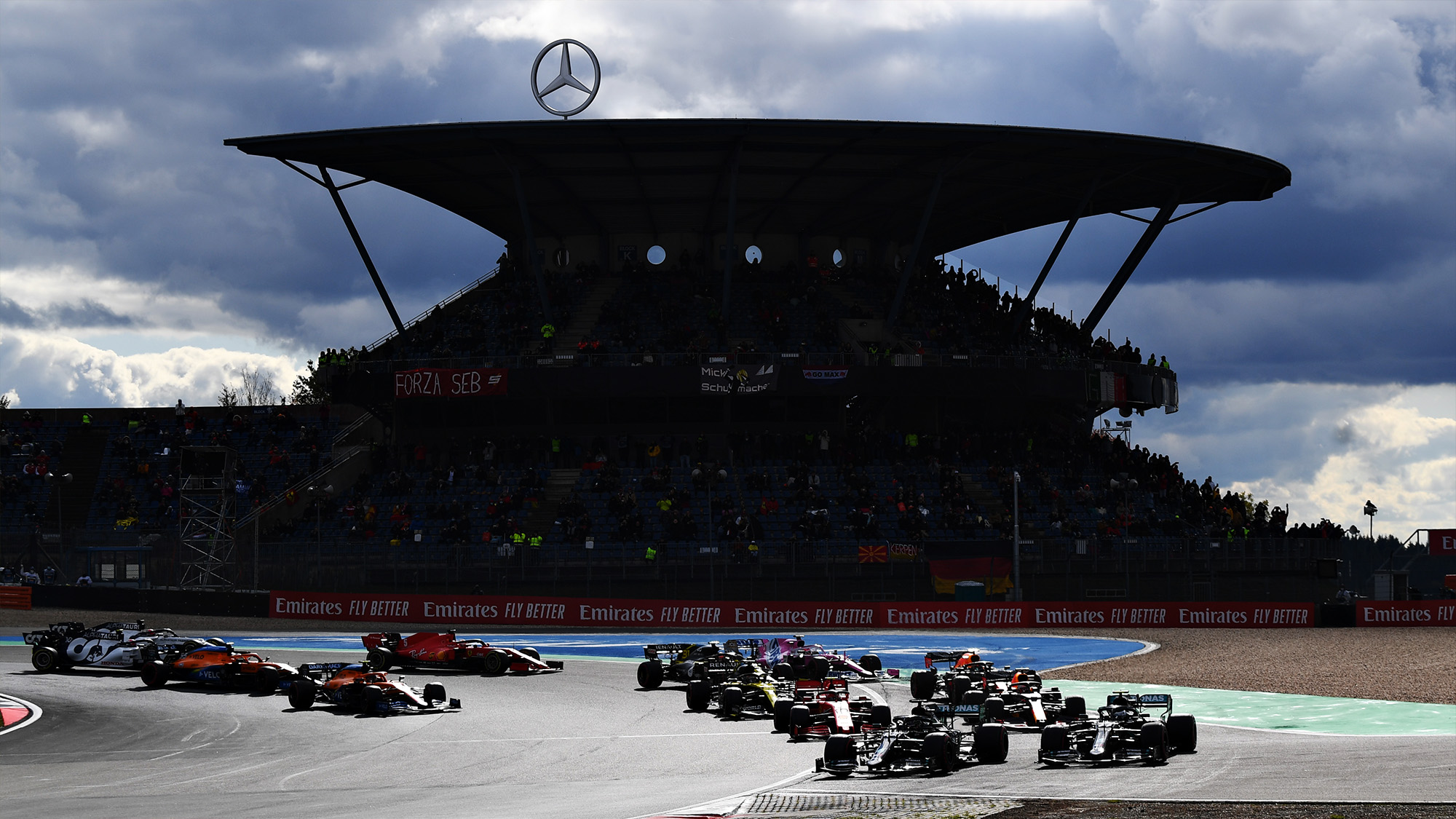 Hamilton was ahead after Turn One, but Bottas came back on the inside at the next corner

As Bottas led the early laps, Hamilton was able to stay within 1.5 seconds and keep the pressure on, all the while putting enough of a gap – never more than two seconds but always bigger than the one in front – to Max Verstappen behind him.

Then came Hamilton’s chance, as Bottas cracked and locked up into Turn One on lap 12. Very light rain was falling and the Finn felt there was less grip that caught him out as the lead driver on the road, and although he again had the inside line for Turn Two after running wide, this time Hamilton swept around the outside to take the lead.

“I just had to make sure I tried to hang onto him for as long as possible and I managed to look after my tyres really well,” Hamilton said. “I could see he was graining his front tyres, so I knew the next few laps were time for me to push, and then he had the lock-up.

“It was not an easy race at all. The Red Bulls are so fast, Max [Verstappen] drove extremely well. I think the one place and chance he had was at the restart, but I managed to pull a nice gap. But you could see their pace at the end, we’ve got a serious fight on our hands. I am knackered.”

Bottas had to pit instantly after his error, but it could well have been a blessing in disguise given the strategic unknowns after so little practice running. The Finn felt he was still in the fight despite being forced onto a two-stop, but then reported a loss of power and retired with a suspected MGU-H failure. 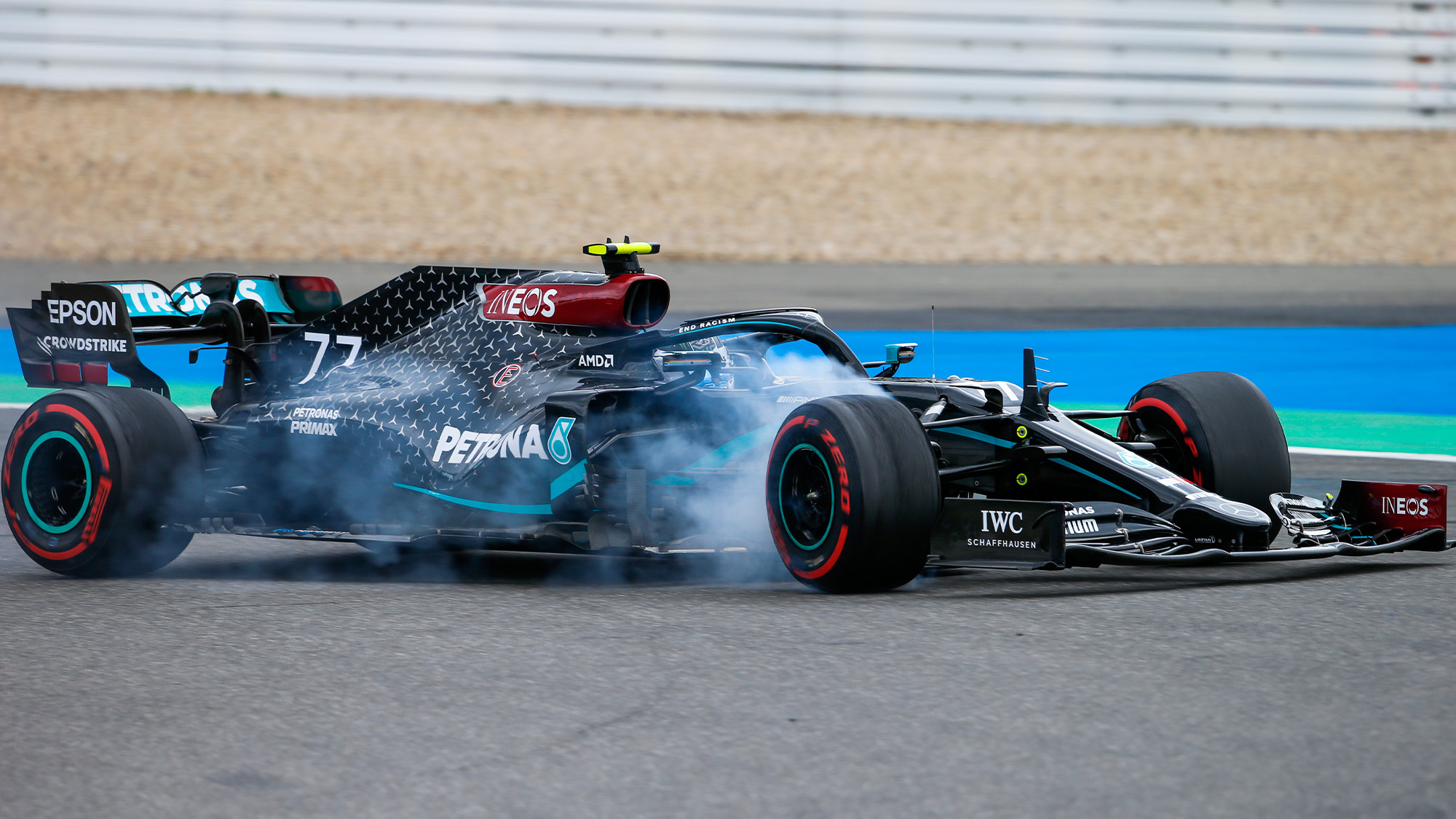 Lock-up by Bottas released Hamilton, and the day would get worse for the Finn

“It’s disappointing, of course, just very, very disappointing but it’s one of these things you cannot do anything about,” Bottas reflected. “Obviously, I also had the lock up before that but, still, I still had all the chances to win, because that made me go into a two-stopper quite early and I think two-stops, in the end, was the best strategy.

“I knew there was still all to play for even after that lock up on the drizzle, but then came the engine thing and I couldn’t believe it. I understand the gap to Lewis is now pretty big in the points, so I would definitely need a miracle, but, as always, there’s no point in giving up, I have to keep the bar high for me and keep trying. It’s just disappointing – that’s the best word.” 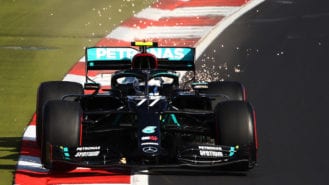 Valtteri Bottas is enjoying something of an Indian summer. There was always a suspicion that Nürburgring’s low-grip, ‘green’ surface might play to his strengths, and so it proved. Covid scheduling…

Luck wasn’t on Bottas’ side though, even before he pulled into the pits. As Sebastian Vettel – recovering from a spin trying to overtake Antonio Giovinazzi at Turn One – DRS’d his way past George Russell, Kimi Räikkönen tried to follow his former team-mate through at the first corner. But a snap of oversteer saw Raikkonen punt Russell into the air, and a left rear puncture saw the Williams stop at the end of the first sector.

The Virtual Safety Car was required to recover Russell’s car, and it came out with Hamilton and Verstappen in the final sector. Pitting instantly, the pair lost little time, while racing resumed as soon as they exited the pit lane.

Just three laps later, Bottas limped into the pits as Hamilton leapt away. Verstappen didn’t have an answer for the leader at the stage, but the Nürburgring kept hinting that there would be a twist.

The VSC restart saw more contact as Alex Albon cut across the front of Daniil Kvyat before the final corner and broke the AlphaTauri’s front wing. Kvyat would leave debris on the pit straight that was cleared under yellows, but endured a painful lap with little downforce. Albon was handed a five-second time penalty but didn’t take it as he then retired with a punctured radiator system that saw his temperatures rocketing.

Vettel dropped down the order after going off behind Giovinazzi 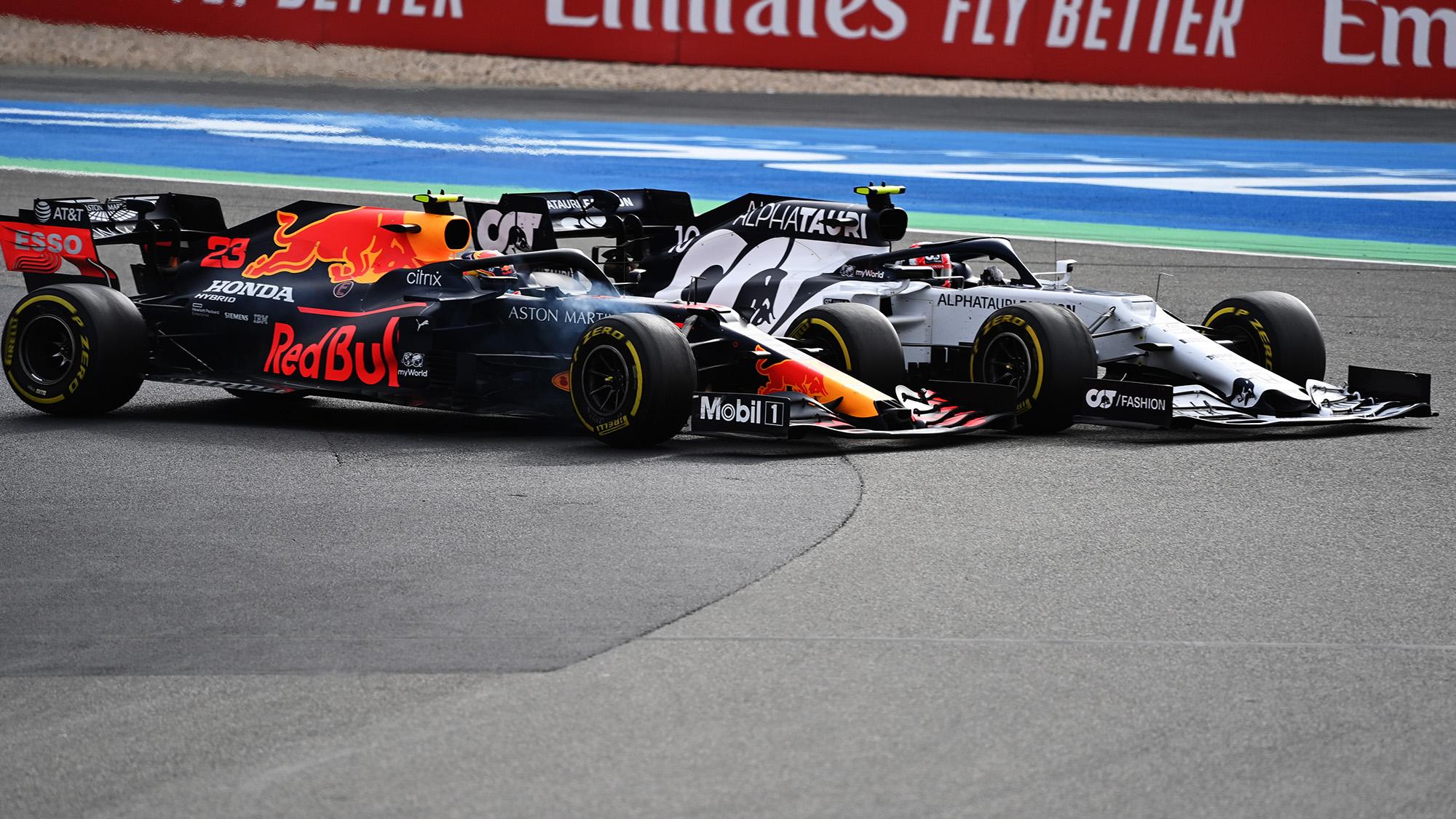 Albon retired before serving his penalty for cutting across Kvyat

Esteban Ocon rolled into the pits with a hydraulic issue one lap before Albon, making it four retirements in 11 laps, before Lando Norris – at this point running third – reported his own loss of power and lost pace.

Norris was closest on the road but turned out not to be the biggest threat to Daniel Ricciardo’s hopes of the podium at that point. It had looked set to be another strong run to P4 for the Australian after he pulled a beautiful move around the outside of Charles Leclerc on lap nine, but then Bottas’ issue promoted him to third.

“It was critical to get Albon and Leclerc,” Ricciardo said. “Leclerc held on for a few laps and defended well, but then I got him. That set us up, then Valtteri had a problem so that gave us the track position. But we knew Norris and [Sergio] Perez were going very well on the soft.” 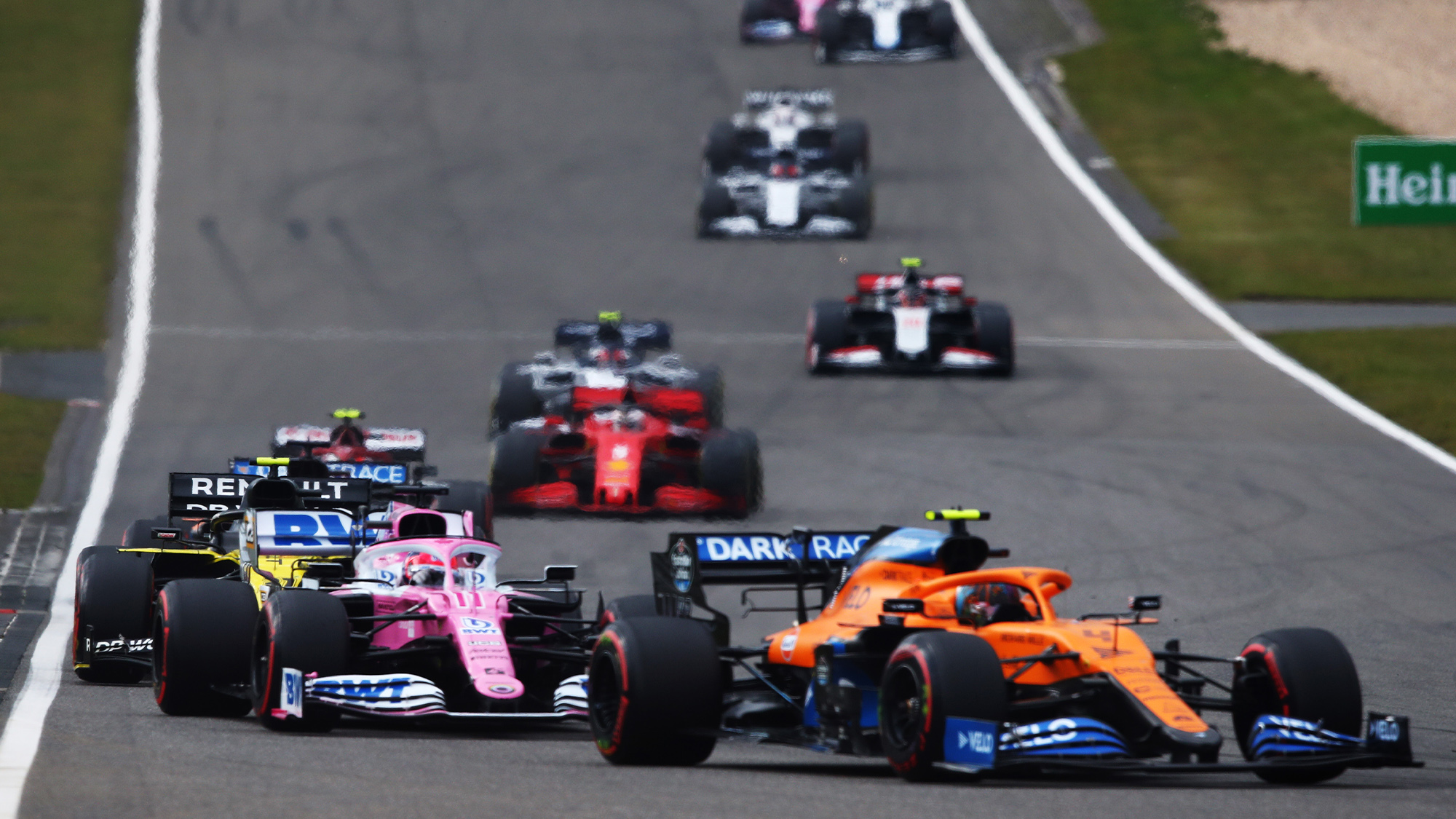 Norris was running in third before power unit gremlins

When Norris slowed, he was eventually overtaken by Perez and the true pace of the Racing Point was unleashed, closing in on the Renault that had been into the pits much earlier. So it was perhaps slightly lucky that all of the frontrunners got the chance to take on fresh tyres when Norris’ McLaren finally gave up and caused a safety car 16 laps from the end.

It was a long stint that resulted in plenty of driver complaints about cold tyres, but when racing resumed with 11 laps to go the top five of Hamilton, Verstappen, Ricciardo, Perez and Carlos Sainz all held position. Just. And that’s how they’d finish.

“The Safety Car restart at the end, I was very close to getting Max, but us tussling meant that Perez got very close and I thought that he was going to get me into Turn Four,” said Ricciardo. “So it was pretty stressful, but it’s been two and a half years since I’ve had a podium and [it’s] really nice. 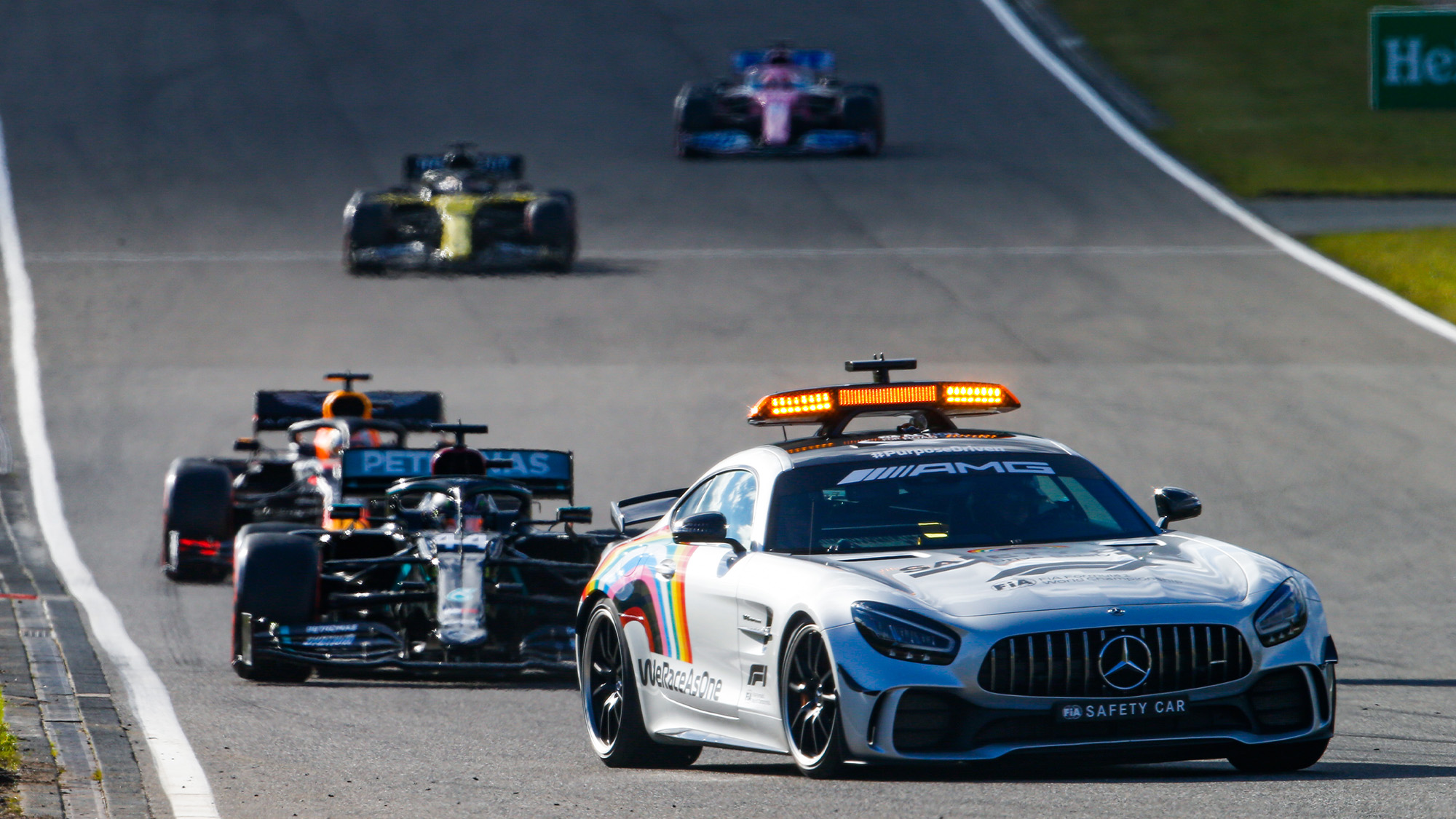 Ricciardo took aim at Verstappen’s second place at the restart, but quickly found himself defending against Perez

“When we signed on the dotted line, this Renault contract, it was to be up here and get a podium by year two. We achieved that. Next year is another story, I am moving on but I think this really does still cap a pretty cool story we’ve had and shared for these two years. The good news is it’s not over yet.”

For Verstappen it was a brief moment of excitement in an otherwise lonely race, as he couldn’t quite hang on to Hamilton but was streaking clear of the rest of the field.

“It was good,” Verstappen said. “I tried to follow Lewis around and I think he was a bit faster throughout the whole race. From our side, overall it was a positive weekend. Very pleased with that. We just keep on working to try and close the gap further.”

Pierre Gasly pulled a good move on Leclerc for sixth in the final ten laps while Nico Hülkenberg deserves immense praise for a faultless drive to eighth from last on the grid, gaining 12 places. But there was a far more notable number to focus on when the chequered flag greeted Hamilton first for the 91st time.

“It’s not sunk in, that’s for sure,” Hamilton said of matching Schumacher. “I don’t know how it is for other drivers when they have these wins it takes time to analyse, realise what it actually means.

“Like all of us I grew up watching Michael win all those grands prix and I couldn’t even have fathomed equalling him. Getting to F1 was the first step of the dream, emulating Ayrton [Senna], but Michael was so far ahead.

“It’s beyond my wildest dreams to be here today and I feel really humbled by the moment and the opportunity I was given when I was 13, by Mercedes to join this team, I feel proud to have joined them and brought this record to Mercedes, hope we have more records to break and make – they know it’s a good investment hopefully!”

After his 70th win for the German marque, and this one on German soil, you’d imagine so. 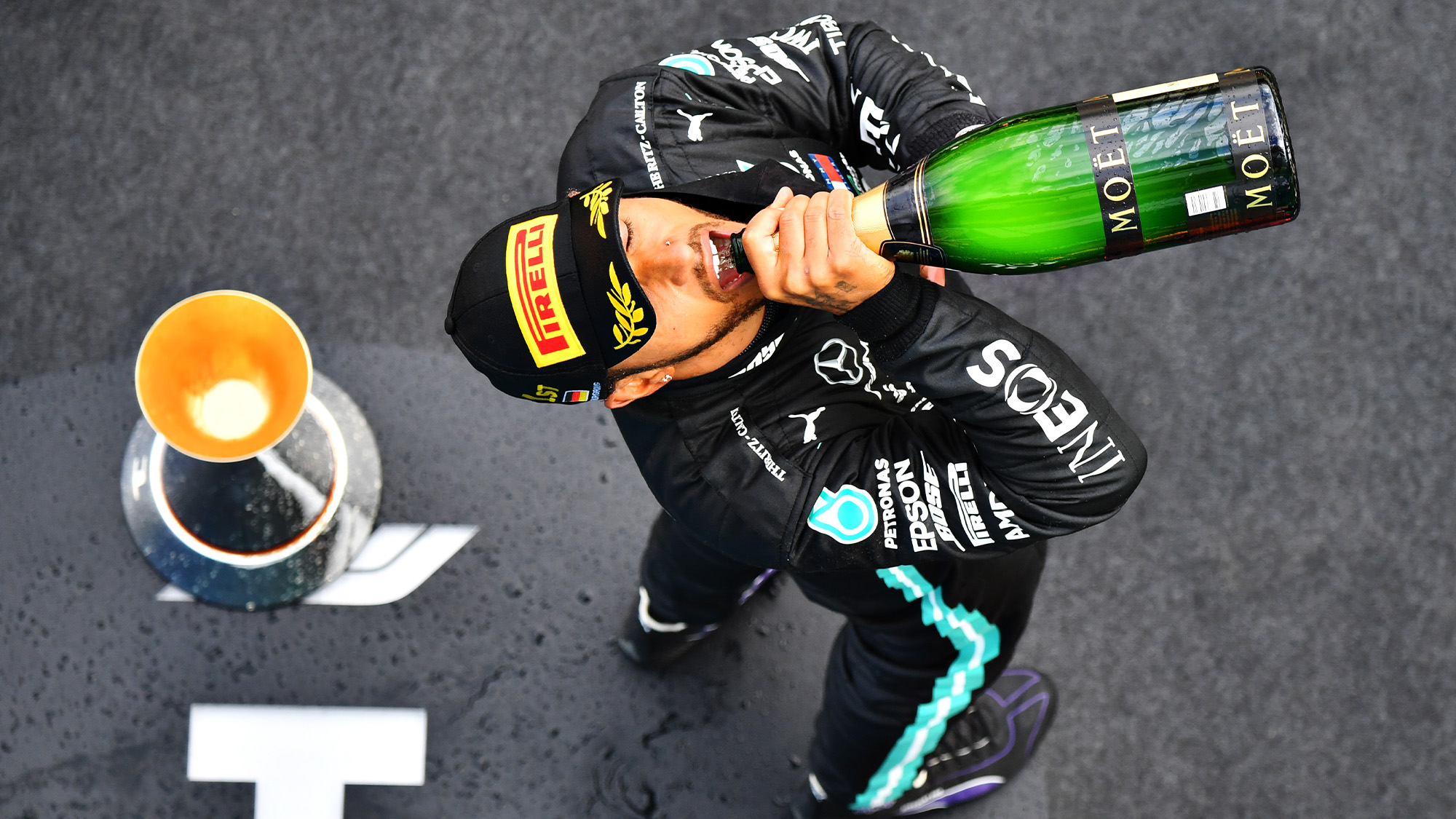 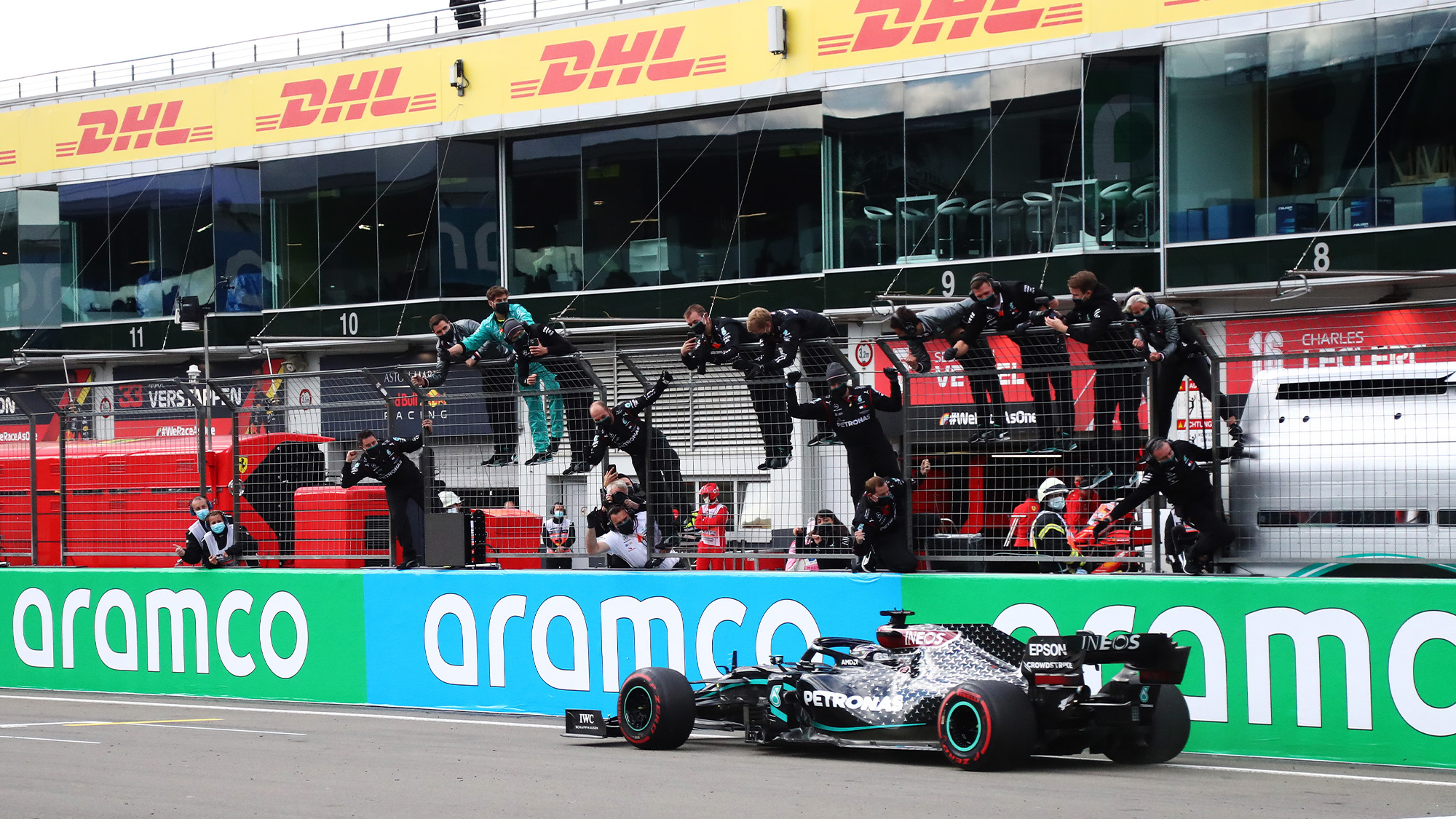 Hamilton crosses the line to take his 91st victory 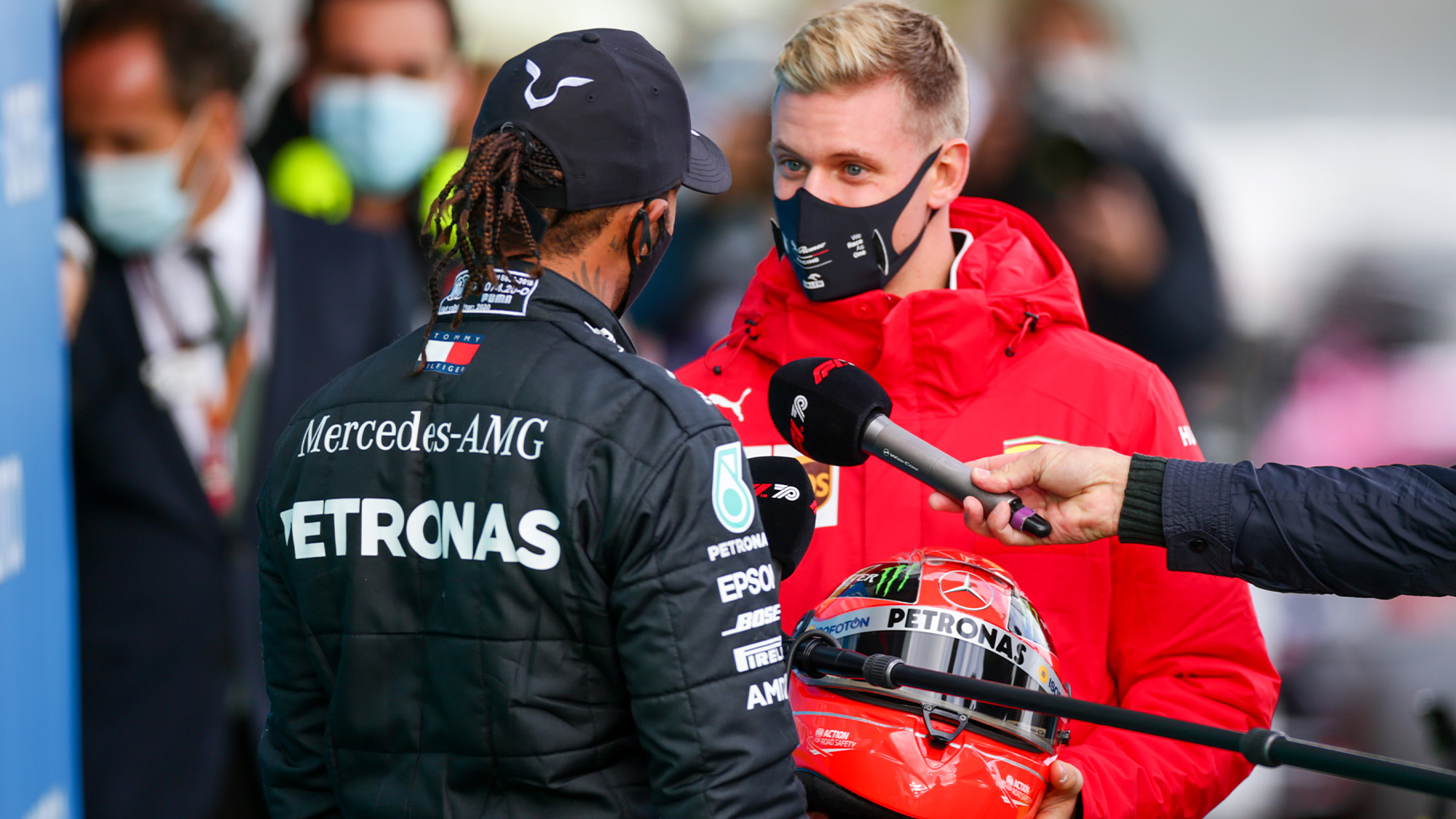 Mick Schumacher presented Hamilton with one of his father's helmets