Pick up a time sheet and it looks odds-on that Lewis Hamilton is perfectly poised to equal Michael Schumacher’s all-time record 91 GP victories in tomorrow’s Russian GP at Sochi. But it won’t be plain sailing.

Hamilton’s lap, more than sixth tenths quicker than Mercedes team-mate Valtteri Bottas, who was beaten to the front row by Max Verstappen, was another one of his sublime efforts after a qualifying hour that ran anything but smoothly.

Hamilton came within 1.2sec of going out in Q2. “It was one of the worst qualifyings, horrible, heart in mouth the whole way,” he admitted.

The catalyst to his Q2 drama was running wide on the exit of the final Turn 18 on run one, and having the lap deleted. It meant he still had no time on the board when Sebastian Vettel lost his Ferrari at Turn Four, clattered into the tyre barrier and red-flagged the session. There was 2min 15sec left on the clock. At the time, Hamilton was three corners from the end of his second lap and obviously comfortably on schedule to go through when he had to abort.

Vettel appeared to take too much inside kerb. Struggling in sector one throughout, he’d cleared Q1 15th, took more risk and overcooked it. Outqualified in the last six races by team mate Charles Leclerc, Sebastian now hasn’t made Q3 for the past five grands prix.

The timing of his faux pas meant that Hamilton now faced an uncomfortable scramble to get a lap in and couldn’t afford any errors. 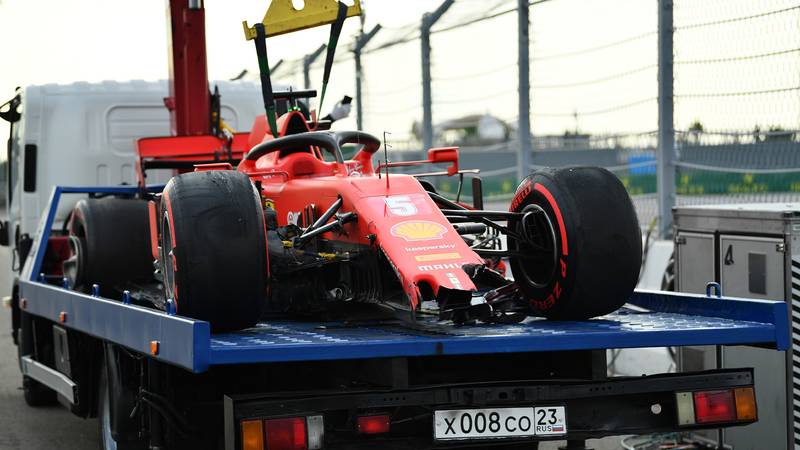 Another dismal qualifying session for Vettel put Hamilton in peril

You might have expected that in such circumstances, Mercedes No44 would have been first to the end of the pitlane for the session resumption, rather than eighth in line. Such a position left him highly vulnerable to anyone ahead messing up and causing a yellow.

The reasoning was that to do that would have required sitting in the queue with the engine switched off, as the wait would have overheated it. And the Mercedes does not have the facility to restart with the ers-K. Which also explains why Lance Stroll was pushed out of the queue when his temperatures rose and the team switched off, meaning he starts 13th tomorrow.

Hamilton then needed to leave a gap before the start of his hot lap and, by the time he did that, there was just over a second to spare, with poor race engineer Pete Bonnington almost apoplectic over the radio. 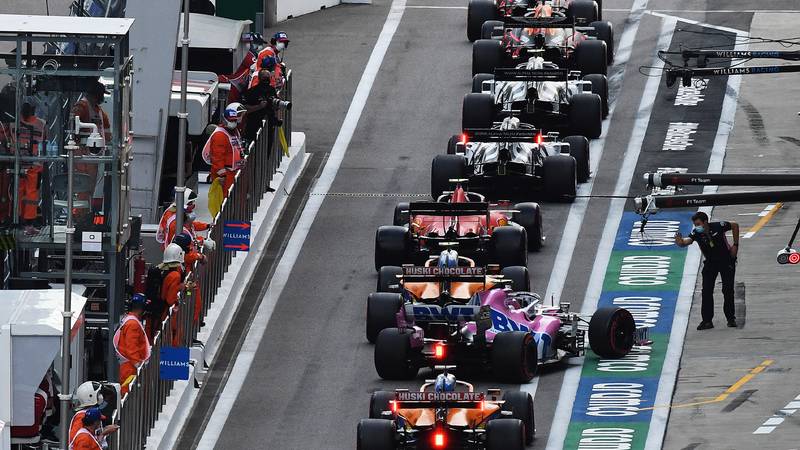 It was also a bit of a surprise when Hamilton went back out on the red-walled Pirelli soft compound whereas his first two runs had been on the medium. That was not a decision he’d have taken lightly given that both Bottas and Verstappen used the medium tyre in Q2, which is expected to make a single-stop race relatively comfortable, despite Pirelli bringing the three softest compounds in its range.

The pros were that Lewis had a better chance of generating tyre temperatures with the soft if he was messed around on the out lap. And, providing he got through Q2 and went on to take pole — a fair assumption if your name is Lewis Hamilton — this was Sochi, with that huge long drag down to Turn Two at the start, where the pole man is a sitting duck. Engineers will tell you that all things being equal, a driver starting third and picking up a draft without having to get out of the throttle, will be 8m better-off than the pole man by the time they reach the braking area.

“It’s a good place to start third!” Bottas confirmed, having won the race from there in 2017 after out-dragging the front row Ferraris. And who can forget last year when the red cars worked together to negate that effect, pole man Leclerc allowing Vettel to tow past him, before selective memory loss caused Seb not to play out his part of the bargain. 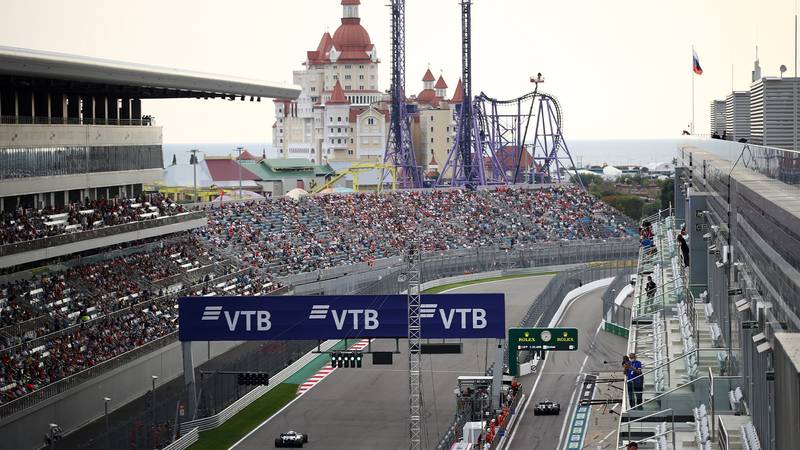 So, the extra grip of the softs off the line versus Verstappen and Bottas on mediums, might give Lewis a sporting chance of defending his pole. From there, who would bet against his tyre management skills still facilitating a one-stop? Here of all places.

Sergio Perez has never managed to qualify in the top three. That looked set to change until Verstappen produced a fantastic lap to pip Bottas by a tenth and bump the Racing Point to fourth. On something of a bogey track for Red Bull, and after an opening day on which Verstappen couldn’t find a balance he was happy with, it was unexpected. The fact that it left Alex Albon gasping, almost 1.2sec slower, was a measure of just how good it was.

It was still a more than commendable effort from Perez, who is clearly not in the happiest of places right now. It has emerged on social media that he found out about the end of his days with the team when, in the next hotel room, he overheard Lawrence Stroll discussing the details of Vettel’s contract…

Admirably, Perez has refused to discuss any of the ruminations within a team that he is clearly fond of and on good terms with the vast majority. He admits too, that he can see Stroll’s thinking. Just a case of wrong place, wrong time. He did mention though, that a few people are now hiding things from him — not ideal — and in Russia his car still does not have the upgrades on Stroll’s car at Mugello a fortnight ago.

Still though, he gives his all. “I was really pleased with the lap. I don’t think I could have done better and I’m happy to have beaten Renault.” Incidentally, he overcame the Q2 Mercedes resumption overheating problem by joining the queue late.

There was precious little in it between Racing Point and Renault, with Daniel Ricciardo lining up fifth. Smiley Dan was actually third quickest behind the Merc twins in FP2 on a track which he admitted was probably the worst of last year from a personal performance perspective. The car didn’t feel quite as good in qualifying as it had the previous afternoon, but given Renault’s starts and its straightline performance, take cover if Ricciardo picks up a double tow from the outside of row three on the opening lap! 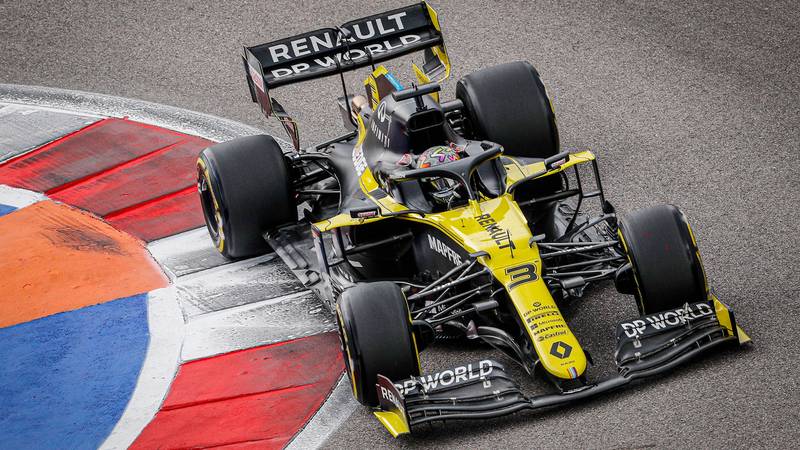 Ricciardo: an outside bet for the lap one lead?

Team-mate Esteban Ocon was a quarter of a second slower and two places further back, as the Renaults sandwiched Carlos Sainz’s McLaren.

The MCL35s were running in different trim, with Sainz focusing on established parts / set-up while Lando Norris ran new bits. The car seems especially sensitive to wind changes, which explained why Sainz went back out in Q2 despite having a banker first run lap that was good enough for third overall.

“I just wanted to practice Turn Two and not take the chequer,” he explained. “In morning practice Turn Two was not an issue at all but the wind changed direction 180 degrees and suddenly Turn Two and Turn Five were really tricky. As soon as that happened we were out of the sweet spot. I’d thought we could outqualify Racing Point.”

Completing the top 10 qualifiers, Pierre Gasly was no doubt delighted to pip Alex Albon by eight thousandths to go ninth.

George Russell did another sterling job as well – which seems like a well-worn phrase by now —  more than a second clear of Williams team-mate Nicholas Latifi as he pipped the crashed Vettel’s first Q2 run to put his Williams 14th on tomorrow’s grid!

So, will Lewis hit the magic 91 tomorrow? Don’t bet against it even if he might be a little strategically compromised. And if unconfirmed Swiss newspaper reports that Mick Schumacher could make his F1 debut in Friday free practice with Alfa at Nürburgring in a fortnight’s time prove accurate, wouldn’t it be storybook symmetry if Hamilton rewrote the record book and took 92 on that same weekend? 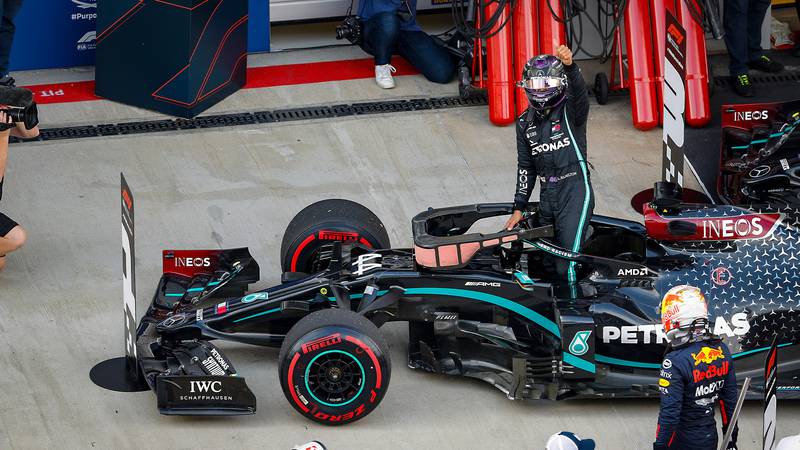 The next time Hamilton celebrates in parc ferme, he could be equal on F1 wins with Schumacher