2020 continues to be one of the strangest years in living memory, and from a sporting perspective, the podium at the Italian Grand Prix certainly fits that description.

After a run of 146 races – stretching back some seven and a half years to Kimi Räikkönen’s victory for Lotus at the Australian Grand Prix in March 2013 – a team other than Mercedes, Red Bull or Ferrari won a Formula 1 race.

Not only that, but there also wasn’t a single Mercedes, Red Bull or Ferrari on the podium. But there was the Italian national anthem.

Pierre Gasly has been through a lot in the last 12 months. Almost exactly a year ago, he was racing for Toro Rosso at Spa-Francorchamps in the first race since being demoted from Red Bull. And on that Saturday night, he saw his close friend Anthoine Hubert killed in a Formula 2 crash.

There was an emotional return just one week ago, where Gasly reflected on a rollercoaster year that had seen him rebuilding his own reputation and showing incredible mental strength, with a podium in Brazil marking the high point since then. Until today.

When the lights went out at Monza, such a result was far from anyone’s imagination. Lewis Hamilton waltzed away as team-mate Valtteri Bottas endured a nightmare opening lap. The Finn reported a “puncture or something” but there was no issue noticed by Mercedes as he tumbled down the order to sixth place and couldn’t recover, leaving Hamilton unchallenged ahead of Carlos Sainz and Lando Norris.

The initial drama revolved around Ferrari, with Sebastian Vettel suffering a left rear brake fire that led to a failure at the end of the pit straight. The German spectacularly smashed through advertising boards before limping to the pits to retire, but that was nothing compared to what would happen to his team-mate a little later. 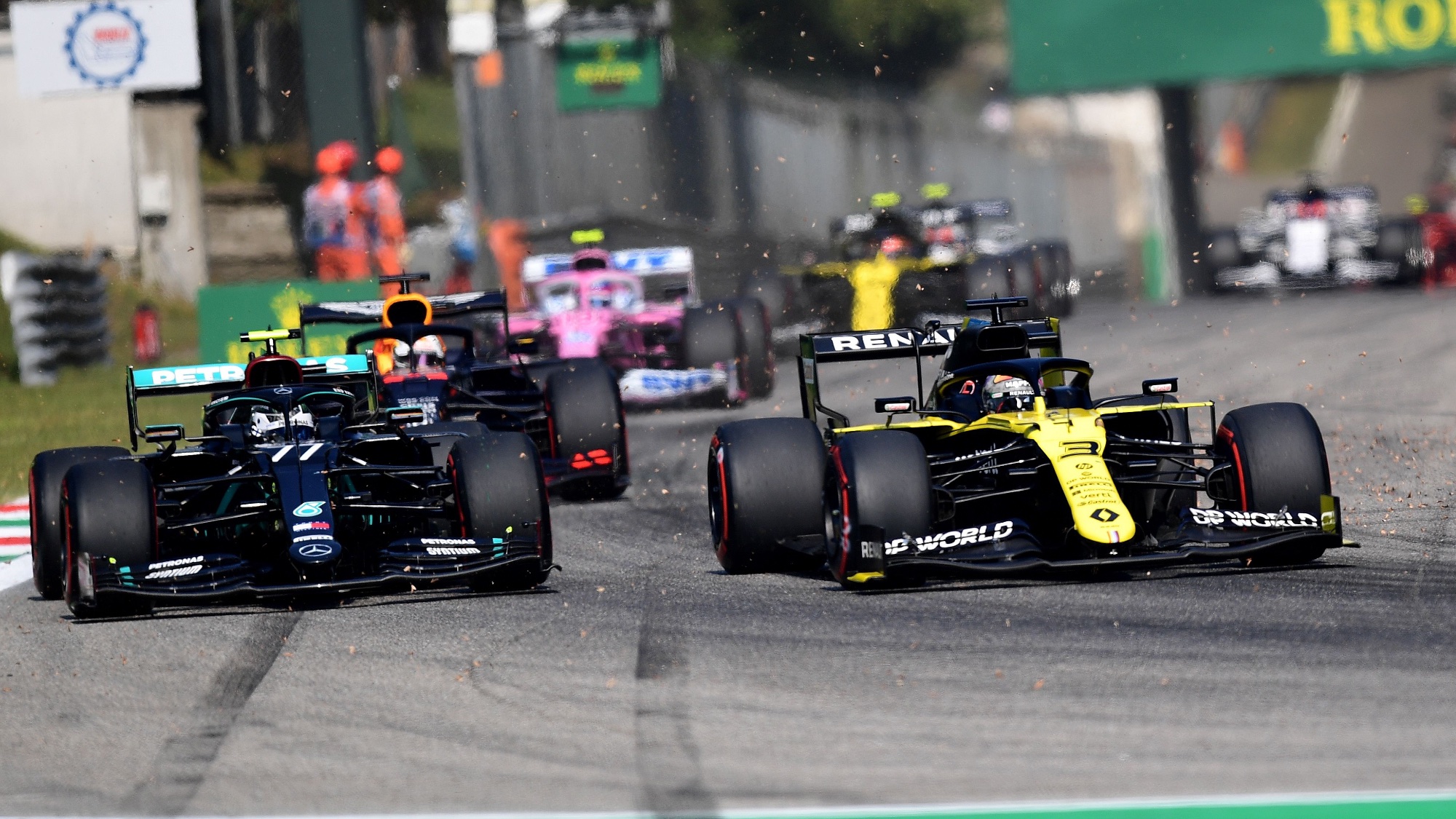 Still, everything seemed to be plain sailing for Hamilton as he looked set to be unchallenged on his way to win number 90 until Kevin Magnussen stopped just before the pit entry on lap 19. One car entered the pits in a stroke of genius as Gasly was called in by AlphaTauri in anticipation of a potential Safety Car, and it duly came.

Then another car entered the pits in a disastrous move as Hamilton entered what was now a closed pit lane due to the need to push Magnussen’s car to the entry. The team had called him in, but boards near the entry told him that wasn’t allowed, and a reversal of that call came too late.

“We didn’t do a great job with the pit stop,” Hamilton admitted. “I didn’t see those boards and take responsibility for that and it’s something I’ll learn from.”

Antonio Giovinazzi made the same mistake, and both would be handed ten-second stop/go penalties, which would be served nearly an hour later.

That was because the pit lane reopened, most teams completed their legal stops and Hamilton was left leading Lance Stroll – who hadn’t yet stopped – Gasly and Leclerc on the road. Just one lap after racing had resumed, Leclerc suffered a big snap of oversteer at Parabolica and speared into the barriers on the outside of the track at high speed.

“I just lost the car,” Leclerc said. “It’s my fault. It was a very difficult race to be honest, then I thought we were unlucky with the Safety Car but we were lucky. With the hard tyres I struggled massively, I tried to push but lost it in Parabolica and crashed.”

The Ferrari driver was thankfully able to climb out unharmed, but the damage to the barrier meant the race was red-flagged and the field lined up in the pit lane. Hamilton took this time to go and speak to race director Michael Masi to protest he hadn’t seen the pit entry boards, but the penalty was never going to change. 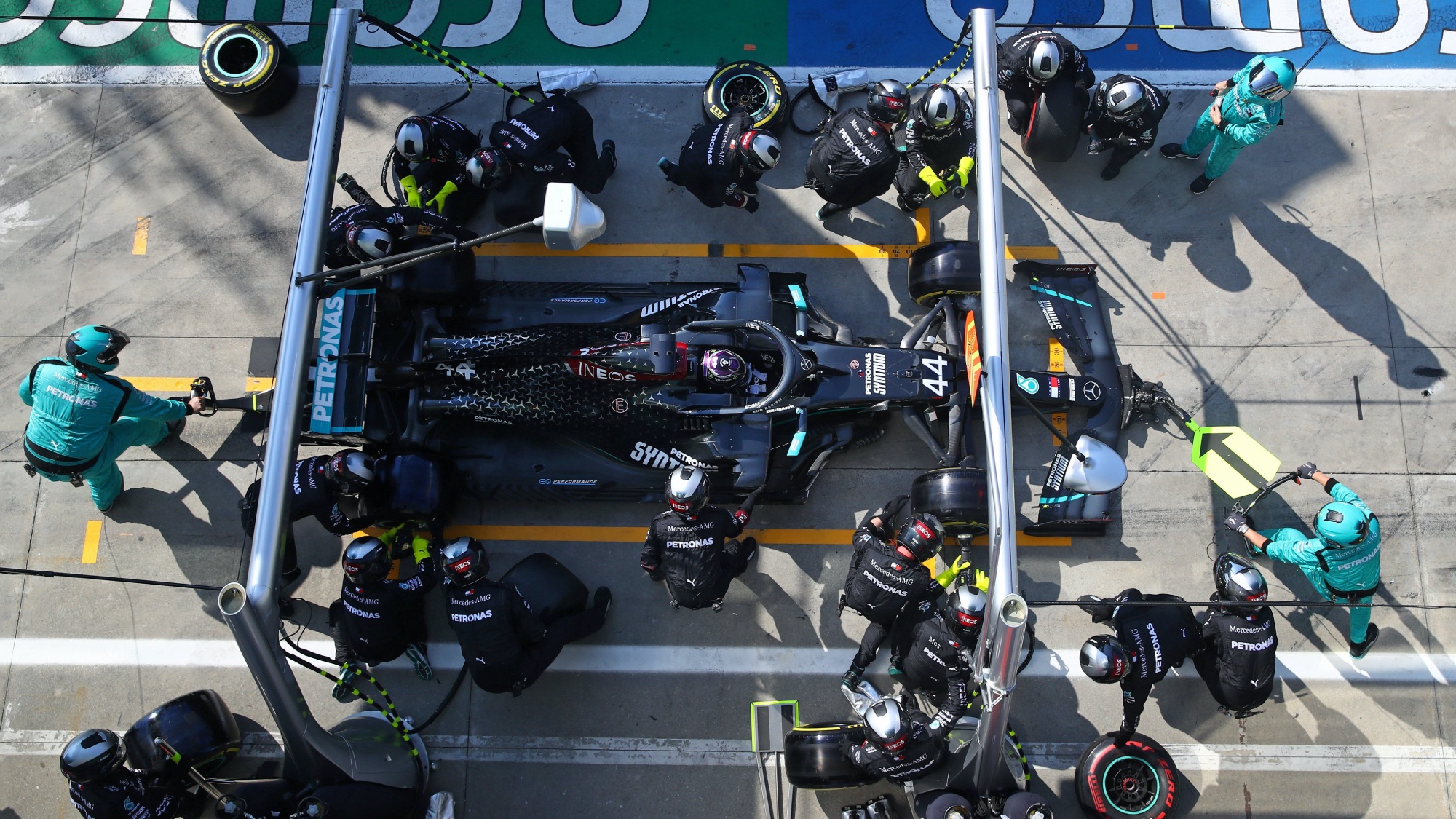 Those choices proved crucial as the race was restarted with a standing start with just under half distance remaining, signaling what was effectively a sprint race that would include a Mercedes at the back. Hamilton led away off the line only to take his penalty at the end of the first lap, rejoining 30 seconds off the lead at the back. And in the lead was Gasly.

Again, AlphaTauri’s decision to start on mediums rather than hards proved the right one as Stroll struggled with warm-up even on the mediums and dropped behind Gasly, Räikkönen and Sainz.

Räikkönen couldn’t hold on and some beautiful moves from Sainz and Stroll around the outside of the Alfa Romeo at the first and second chicanes promoted them to second and third respectively, with Bottas sitting sixth behind Norris and threatening to spoil the party.

The Finn had struggled in traffic in the first half of the race, but cooling tweaks under the red flag opened up the possibility for a charge. Yet it was never forthcoming as Norris held him off with ease, allowing a fairytale fight to develop ahead.

Gasly escaped to the tune of five seconds before Sainz got into second place, and then the gap started to close, and close, and close. Sometimes it was by half a second, other laps it was just two tenths, sometimes nothing, but the McLaren was slowly gaining. With 10 laps to go, it was under three seconds. With five to go, it was 1.5s. On the final lap, Sainz had DRS, but Gasly was not letting this one go.

“After the restart I think we had 28 laps to go,” Gasly said. “I managed to pass Lance into Turn One and I think this really helped me for the rest of the race. Lewis pitted I think on lap one and after that I was on my own, just reminding me of my Formula 2 days, just leading the race and focusing on your own driving, corner-by-corner. 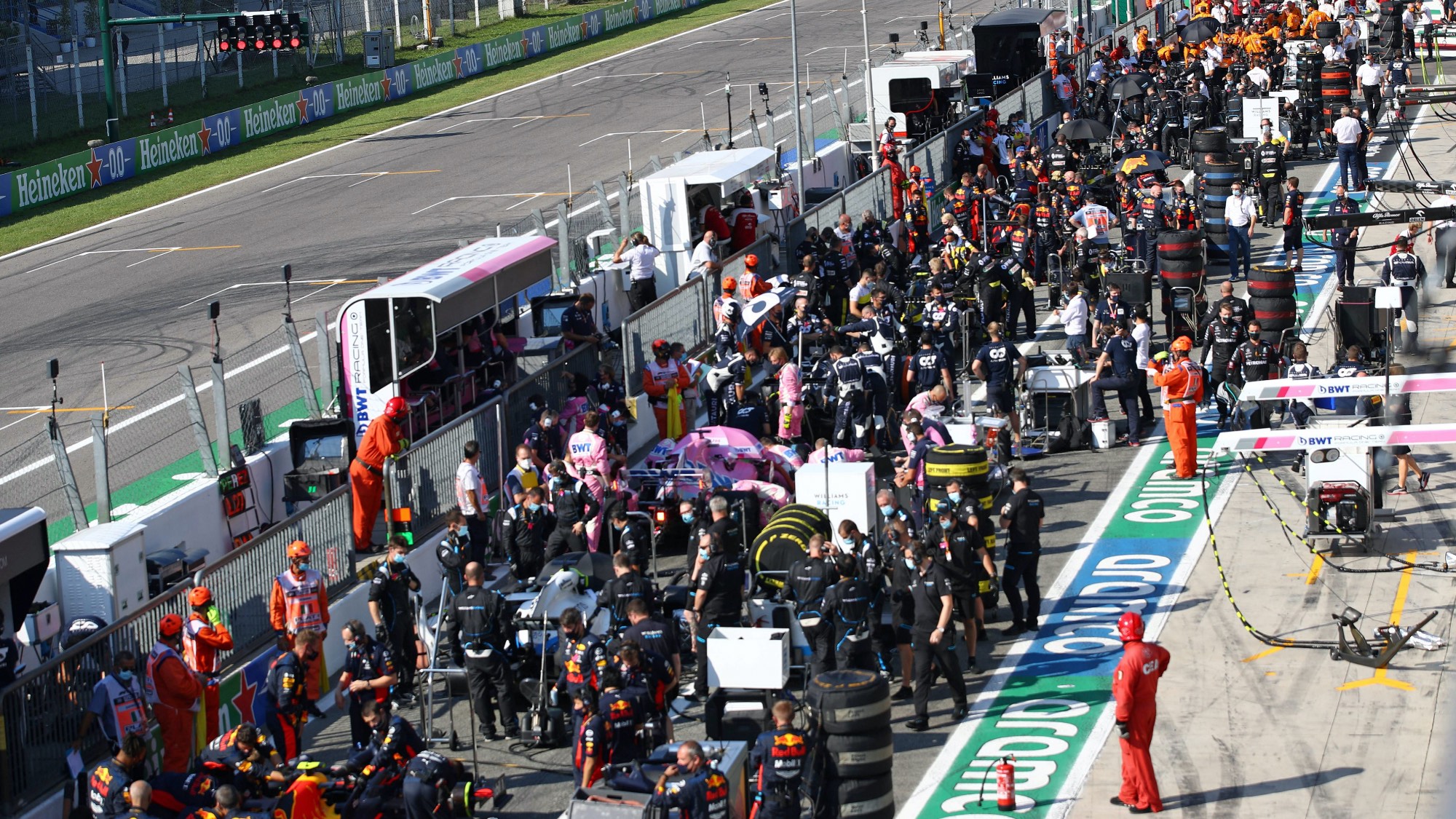 A busy pit lane under the red flag

“I pushed so hard at the start because I wanted to break the tow to the guys behind. I didn’t have anyone in front of me so I knew I had to make the time in the corners. The last five laps were really hard because my tyres were completely gone, I was sideways in every corner, I could see Carlos slowly closing the gap.

“I know myself, I would have been so pissed about myself if I lost the win in the last few laps. I gave everything I had and I’m so happy I managed to get my first race win in F1.”

Gasly is the first Frenchman to win in F1 since Olivier Panis in Monaco in 1996, and a race that will be talked about in similar fashion in years to come. A home win for AlphaTauri, too, 12 years on from Sebastian Vettel’s memorable victory for the team.

With just 0.4sec between Gasly and Sainz at the line – and 3.3sec covering the top three – this was a race many drivers felt they could win.

“It’s incredible to be halfway disappointed with P2,” Sainz said. “I wouldn’t have had believed I would have a chance to fight for victory but we were very, very close. Honestly, in a normal race we would have finished P2 behind Lewis, because we had good pace.

“We’ve got what we deserved but Pierre there, in front, is like how could that happen? I guess we had a bit of bad luck with the Safety Car but we did a good job to recover. Very happy with P2, we’ve been super quick all weekend, I felt like I could dominate the midfield pretty easy, I’ve got to be happy with that.”

Stroll had kept the two in sight but just never had enough to close the gap and really challenge, settling for his second trip to the podium – just as it was for Gasly and Sainz – with another third place.

“It’s been a couple of years since I’ve been on the podium, so it feels good to be back,” Stroll said. “It was such a crazy race and I’m so happy for Pierre, he really deserves it. He had a great start and he managed to stay consistent throughout the race. 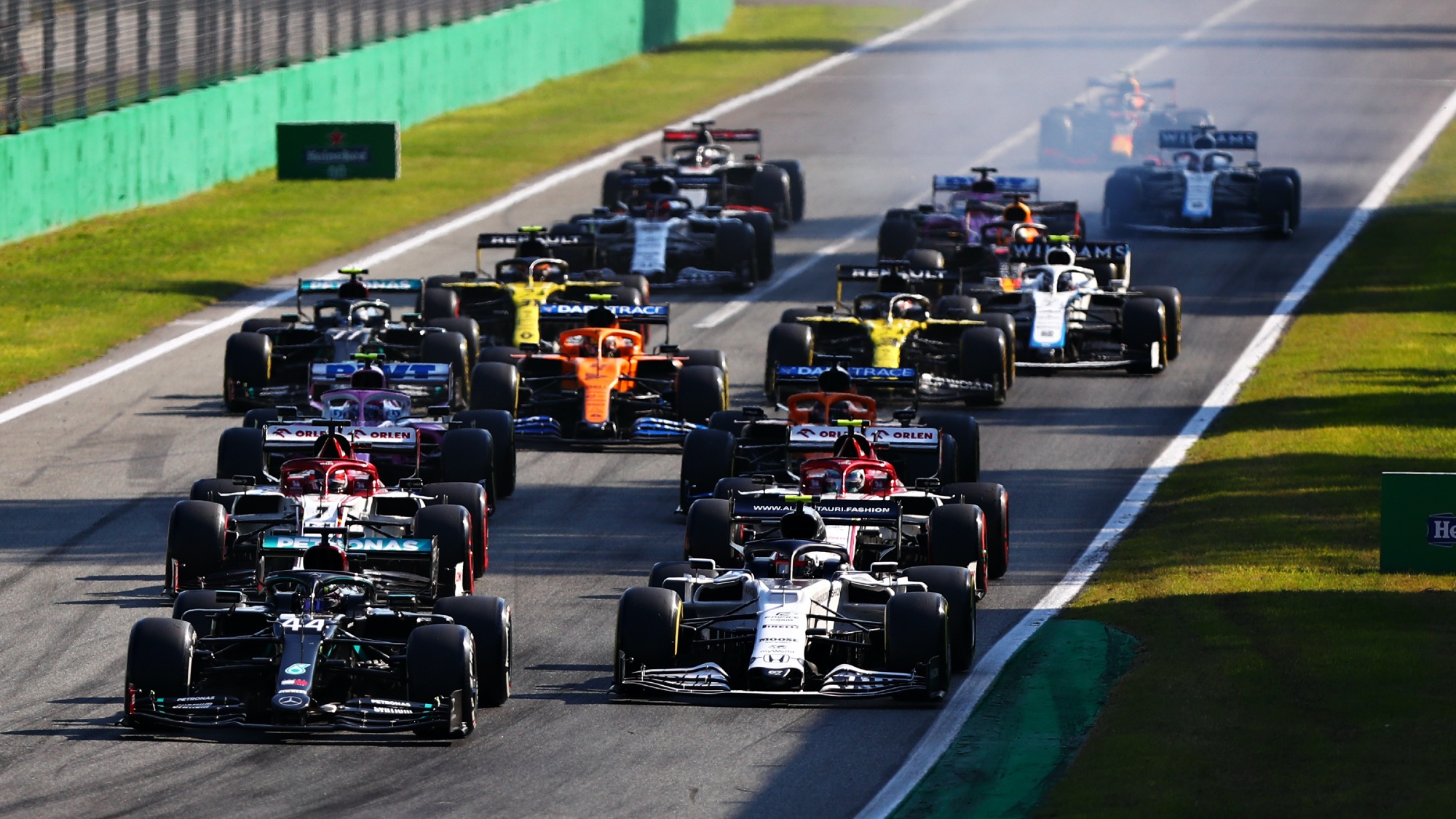 Hamilton led the way on the restart before serving his penalty

“It’s a bit of a bummer after starting second but I just had no grip at the start, I had a ton of wheelspin and everyone flew by me. I had a great scrap with Carlos in the first couple of laps, I overtook him on the outside and he got me again down into Turn One, so we were battling out there, so I’m just happy to pick up third. The win slipped away from us today but third is great.”

Norris came home fourth to make McLaren the highest-scoring team on the day, with Bottas an underwhelming fifth. Hamilton’s strong recovery drive brought him back to seventh behind Daniel Ricciardo, and with the fastest lap point to boot.

Mercedes and Ferrari’s woes were obvious, but what of Red Bull? Max Verstappen dropped to seventh at the start and kept Bottas honest, but after the red flag period, a power unit concern forced his retirement. Things were even worse for Alex Albon, who touched with Gasly at Turn One on the original race start, picked up heavy damage and ended up stuck in traffic at the back fo the field, with only Giovinazzi behind him at the flag.

But that’s not where the focus should be. It should be on exactly what makes sport great. The sort of race that makes you keep coming back to watch F1 time and again, just in case. It’s proof that incredible results can happen, do happen, and sometimes the good guy wins. 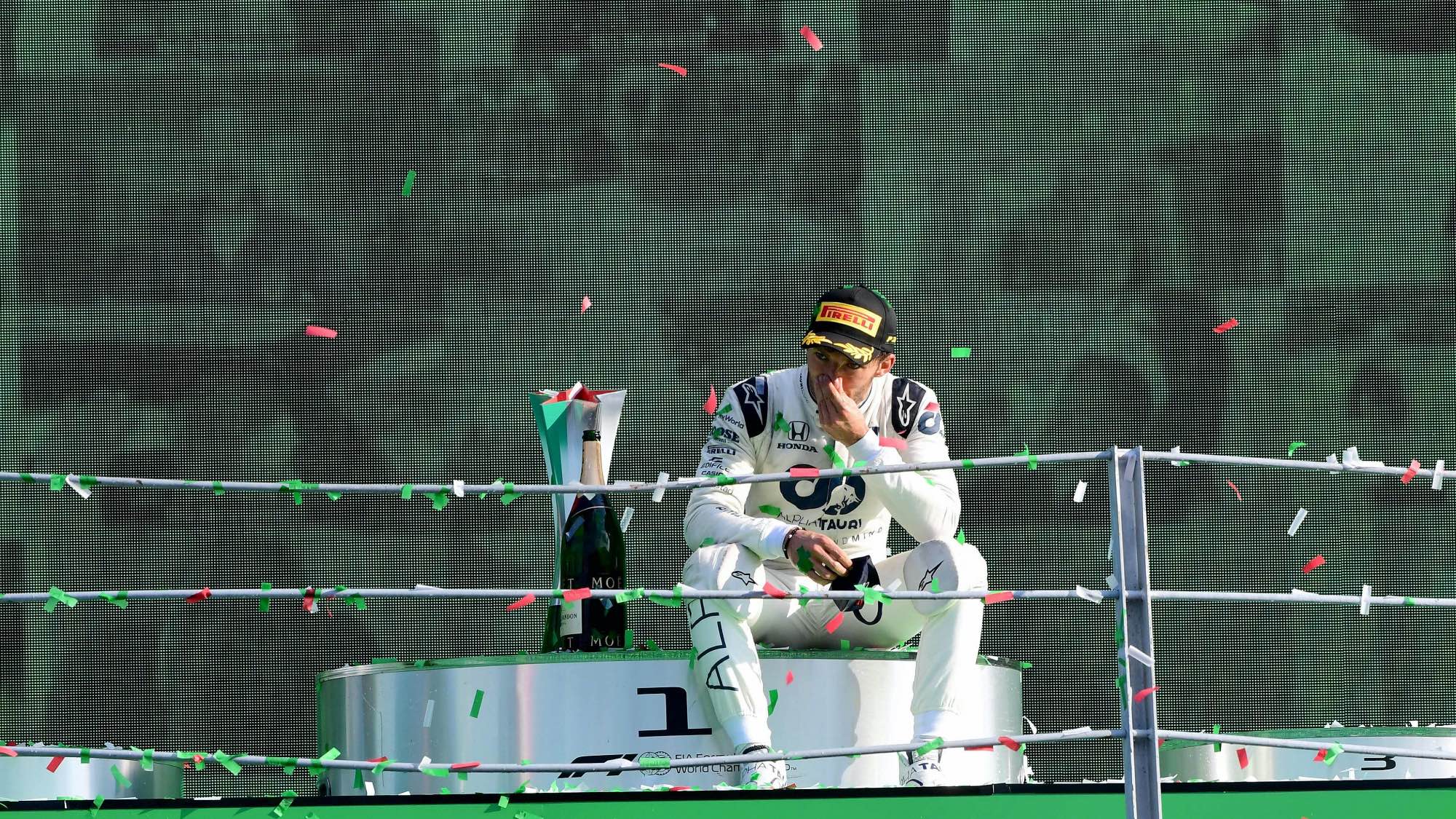 Gasly takes it all in on the podium