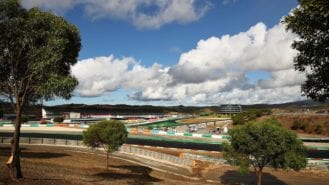 Leclerc, a big fan of Portimao on first acquaintance, managed to pull out a fine lap to go through to Q3 eighth, but Sebastian Vettel, after his best Q1 performance since Silverstone, could not get his tyres in. He lost time in Turn Three and Turn Five, where he briefly locked the right front, and ended up down in 15th. It was the eighth consecutive race that the four-time champion had not made the top 10…

With Christian Horner saying publicly that Alex Albon’s seat is ‘his to lose’ but adding that a decision on next year’s line-up will have to be made in the next two or three weeks, the pressure is ramping up on the Anglo-Thai. But still, he played the team game by helping Verstappen with a tow on the first Q3 run, when he used the medium compound Pirelli, before switching to the soft for his final effort.

With no real continuity of feel, Albon did a commendable job to qualify sixth. He was a couple of tenths down on Sergio Perez’s fifth-placed Racing Point, but the gap to Max was still more than half a second – more than he would have liked. He might have something to fear from the likes of Nico Hülkenberg.

There was just five thousandths between the McLaren men as Carlos Sainz qualified seventh, with team-mate Lando Norris eighth, to move 7-5 ahead in their intra-team qualifying battle.

Pierre Gasly continued his fine run of form to qualify ninth after losing much of Friday practice when his AlphaTauri spontaneously combusted. A new chassis/engine were required for Saturday but the Frenchman wasted no time dialling it in. Daniel Ricciardo’s Renault completed the top 10 but without a Q3 time following a spin at the conclusion of Q2.

Hard though it might be to credit, the rumour mill is suggesting that George Russell, the man they call ‘Mr Saturday’ thanks to his 100 per cent qualifying head-to-head versus F1 team-mates Robert Kubica and Nicholas Latifi, is under pressure for his Williams seat for 2021 from Perez.

Russell’s credentials can’t be called into question but, down at Haas, Guenther Steiner has been making difficult phone calls to both Romain Grosjean and Kevin Magnussen, to inform them that financial circumstances have led him to look elsewhere for 2021. The word on the street is that the team’s drivers next year will be Mick Schumacher and fellow F2 front-runner Nikita Mazepin, whose father is another billionaire.

And so, at Williams, do new owners Dorilton turn down a man like Perez, who brings considerable backing and is also a points machine? Checo is currently on a 15-race run of consecutive points scores, equalling his career-best.

“I have a contract for 2021 and nothing has changed contractually (with the new owners),” Russell said. “I’ve not spoken to the new owners but I’m not concerned that I will not be on the grid with Williams.” Toto Wolff, meanwhile, has said that whatever they do is up to Williams, not him. In the cockpit, Russell continues to do all he can.

Interesting times. It seems the only racing certainty is Lewis Hamilton’s relentlessness. Don’t bet against that new record tomorrow.

Q2 time, as Ricciardo did not set a time in Q3