Mercedes has claimed every Barcelona pole since 2013 – yes, that’s right, even before their dominant hybrid era began, so it was no surprise when the trend continued.

Last year, Valtteri Bottas beat Lewis Hamilton here by a preposterous 0.64sec. This time, there was only six-hundredths in it and it was Lewis ahead of Valtteri to take a 92nd F1 pole and his 150th front row start.

Hamilton’s 1min 15.584sec lap was actually 0.18sec slower than Bottas’s 2019 effort. With Pirelli’s tyre compounds the same as last year and back to the hardest C1/C2/C3 selection of the first Silverstone race, the deficit was more about August track temperature, some 15 degrees hotter than last year’s May race date.

It was mighty close but Hamilton had the edge in the slower-speed tight directional changes of sector three.

“All day I struggled a bit in S3 but Lewis did a really good job there,” Bottas acknowledged.

Not for the first time. Part of the knack of a quick Barcelona lap is keeping the soft compound rubber alive so as not to drop too much time in that final sector. Nico Rosberg, who had to contend with it so often from the other side of the Mercedes garage, explains that one of Hamilton’s great strength is his instinctive feel for the limits of the front tyre under braking. It allows him to run his brake bias further forward than others without locking up, which helps to look after the rears.

As far as the front row went, only the two of them were in it, but that doesn’t mean the race is a foregone conclusion. While Toto Wolff explained that the 70th Anniversary GP post-mortem was productive, he is still curious to see what happens tomorrow. And Hamilton himself was concerned enough to still be in the paddock at 10pm on Friday night, poring over the day’s data. 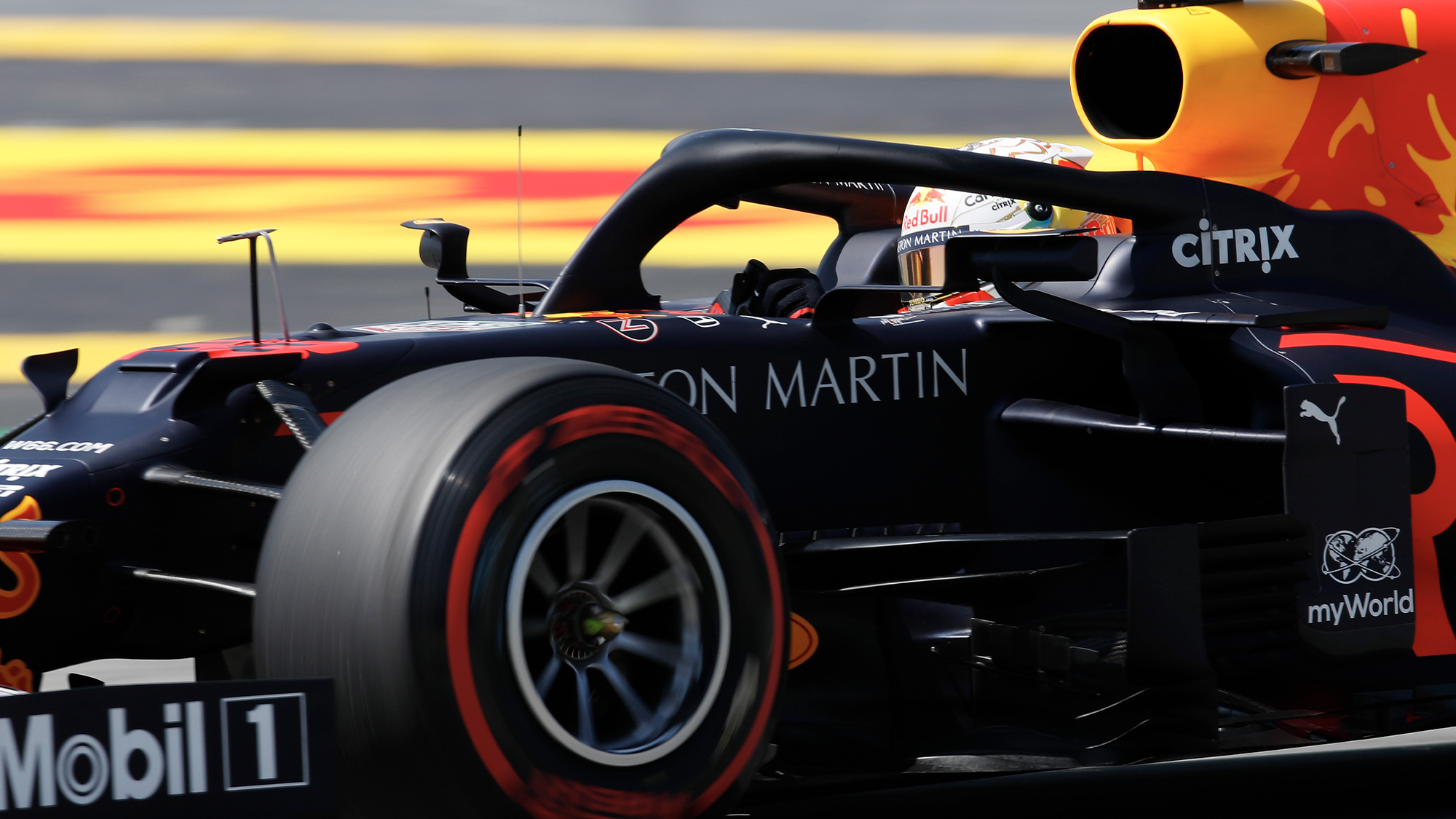 On the medium tyre during Friday’s long runs, Max Verstappen’s pace had once more got their attention and, even though there were no serious blistering issues for Mercedes, it is obvious that significant tyre management is going to be required in the heat of race day.

Mercedes would no doubt have liked the buffer of a Racing Point between themselves and Verstappen, but Otmar Szafnauer’s men couldn’t quite do it. Sergio Perez, back in the car after a negative Covid test, missed Verstappen by 0.19sec and lines up fourth, a tenth clear of team-mate Lance Stroll.

“I’m pleased with that,” Perez nodded, while conceding that after two races out of the cockpit and his strength sapped by the virus, he was feeling things physically. Sergio, another who is highly skilled at eking out tyre life, thinks that there may even be scope for a one-stop race, but concedes it’s marginal.

Stroll, meanwhile, felt he might have gained the upper hand over his returning team-mate but for a lock-up in Turn 10.

There was a considerable gap, the best part of half a second, between the Racing Points and Alex Albon’s sixth-placed Red Bull. 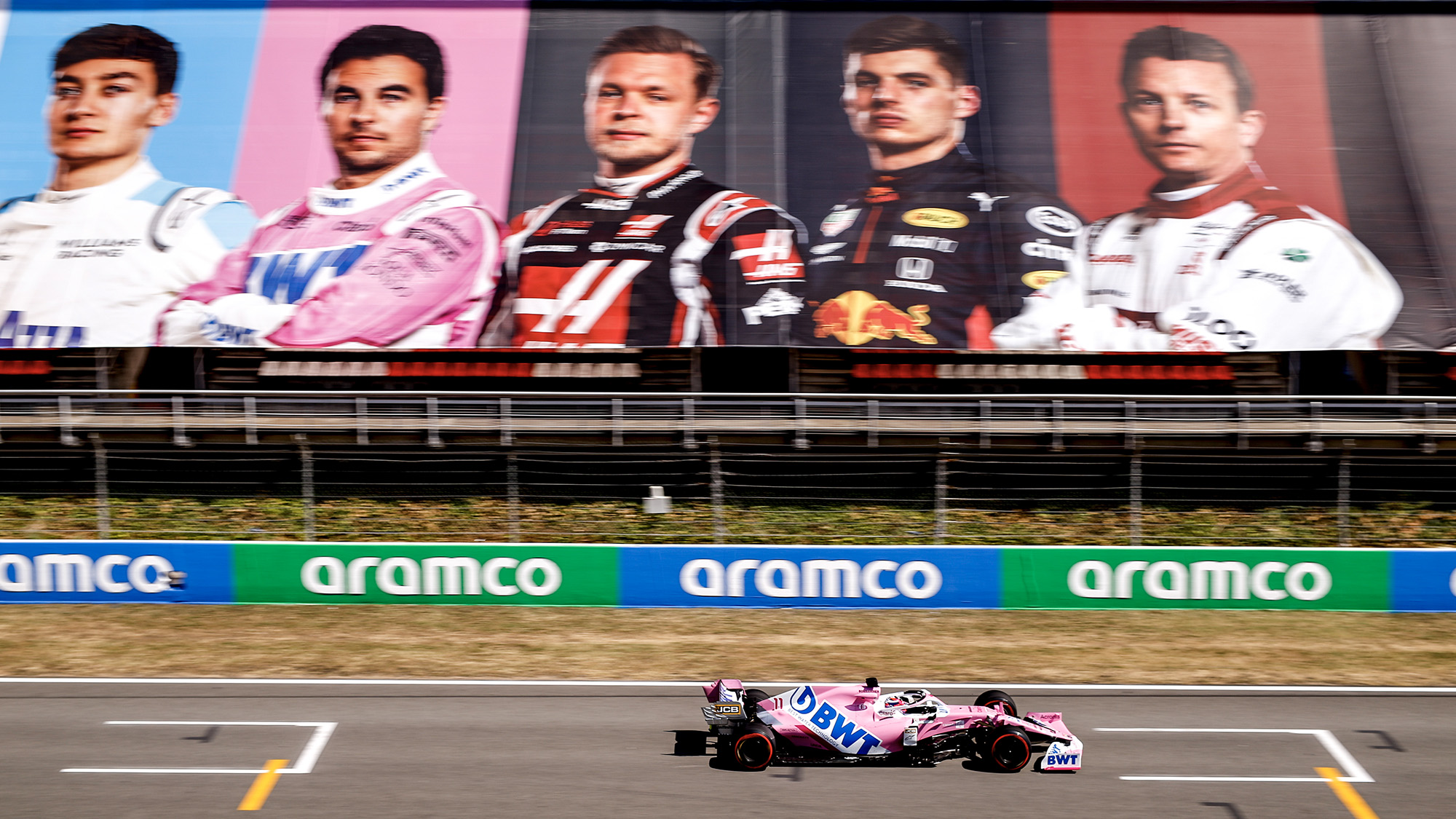 Pierre Gasly can no doubt sympathise with Albon having been there himself taking a pounding from Verstappen at the start of last year. The haunted-looking Albon couldn’t say too much when left contemplating a 0.65sec gap to Max in Q2 and a 0.73sec margin in Q3.

Today’s pressure-cooker F1 environment, such a public arena with every cough and spit minutely scrutinised, gives him nowhere to hide. Albon will know only too well that in Verstappen he faces a freakish talent at the very top of his game.

Are there any straws at which to clutch? Verstappen himself was an average 0.15sec down on Ricciardo in qualifying when they were first paired, but by the end of 2018 had turned it around to such an extent that he was a similar margin in front, the 0.3sec delta coming with increased experience. But at the moment, even that kind of turnaround would leave Albon scratching. He’s displayed some fantastic racing ability on Sunday afternoons, the outside pass of Räikkönen into and through Copse last weekend being one such moment. But, for the moment, Saturday afternoons are purgatory.

Carlos Sainz had a new McLaren chassis in Barcelona in an attempt to solve a cooling issue that has seen him having to open up the cooling package more than team-mate Lando Norris, at the expense of extra drag and hence time loss. The issue is still there but Sainz is always super-quick around his home track. The lack of home support in the grandstands did nothing to slow him and he managed to pip Norris by 0.04sec despite being a couple of tenths slower in Q3 than he managed in Q2.

Norris, still 4-2 up versus Sainz in qualifying over the season, was happy to qualify eighth after suspecting that Q3 might be a challenge following the opening day. Happy but not delirious. There was just 0.06sec between Lando and Albon’s P6 and he’d locked up into Turn 10, so it might have been better.

Three milliseconds behind the second McLaren was Charles Leclerc, who was anything but content.

“We just fell away session by session,” he said. “The car just didn’t have a strong enough front end and we were struggling mid-corner.”

Sebastian Vettel was in worse shape as he failed to make Q3 for the third time this year, bounced out of Q2 at the death by two milliseconds after a great lap from Gasly. 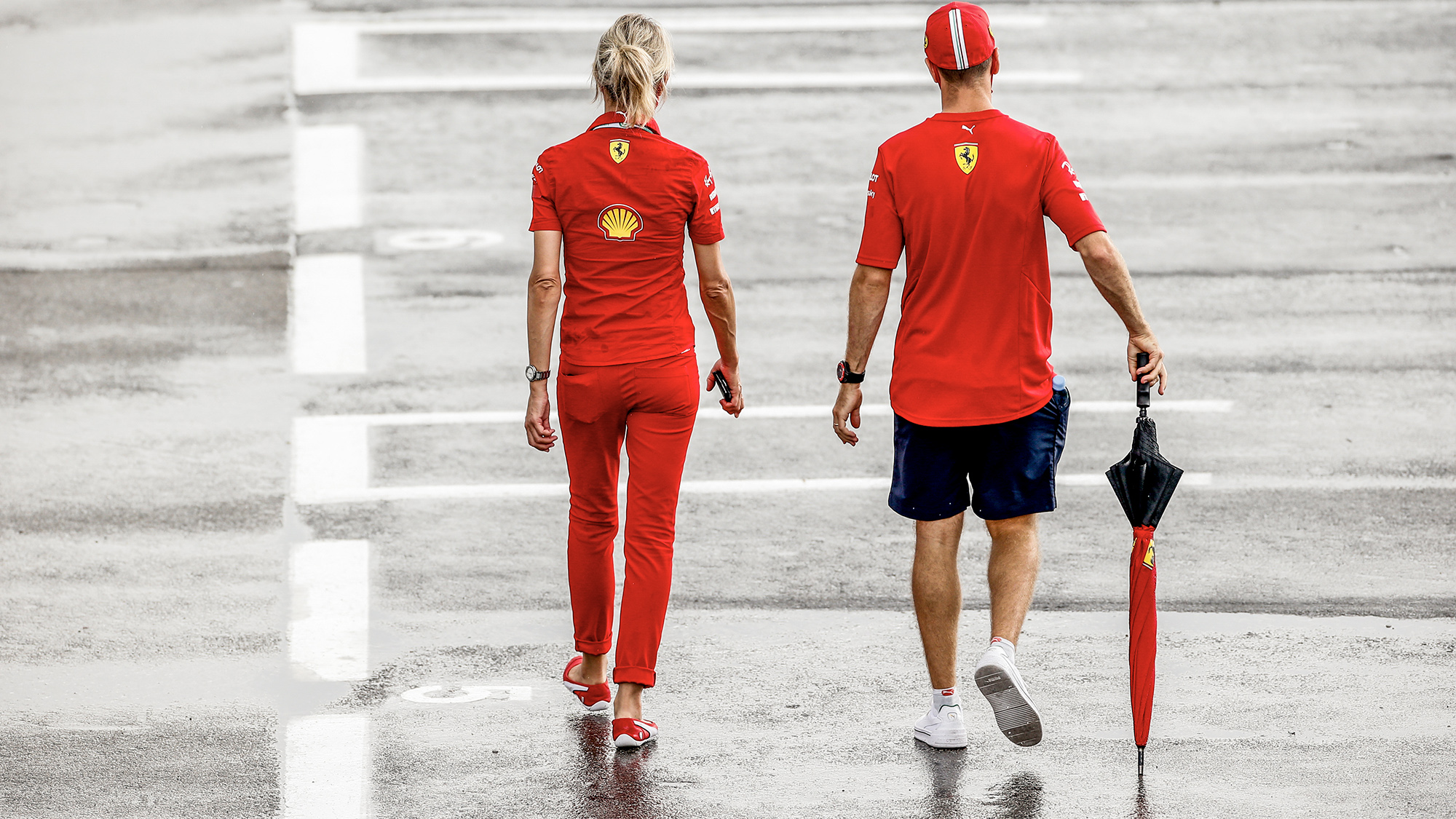 More misery in Barcelona for Vettel, despite new chassis

Vettel has never had a Barcelona pole and, like Silverstone, it has never been one of his stronger tracks. Turn back the clock 10 years and Vettel asked for a new chassis after suffering back-to-back defeats at the hands of Mark Webber in Barcelona and Monaco. Despite some intra-team mutterings that there’d been nothing wrong with the old one, it seemed to work to a certain extent, even if it was a placebo.

A crack was apparently also found in Vettel’s Ferrari chassis after the second Silverstone and so he had a new one for Spain. But this one was no silver bullet and the gap to Leclerc was still there, albeit only a couple of tenths in Q2.

Gasly’s margin over AlphaTauri team mate Daniil Kvyat was almost double that in Q2 as Kvyat failed to make the cut. Had he matched his 1min 16.800sec Q2 lap in Q3, Gasly would have lined up sixth, ahead of Albon once more, but after feeling less comfortable in the car on the opening day, was satisfied enough to make the top 10. 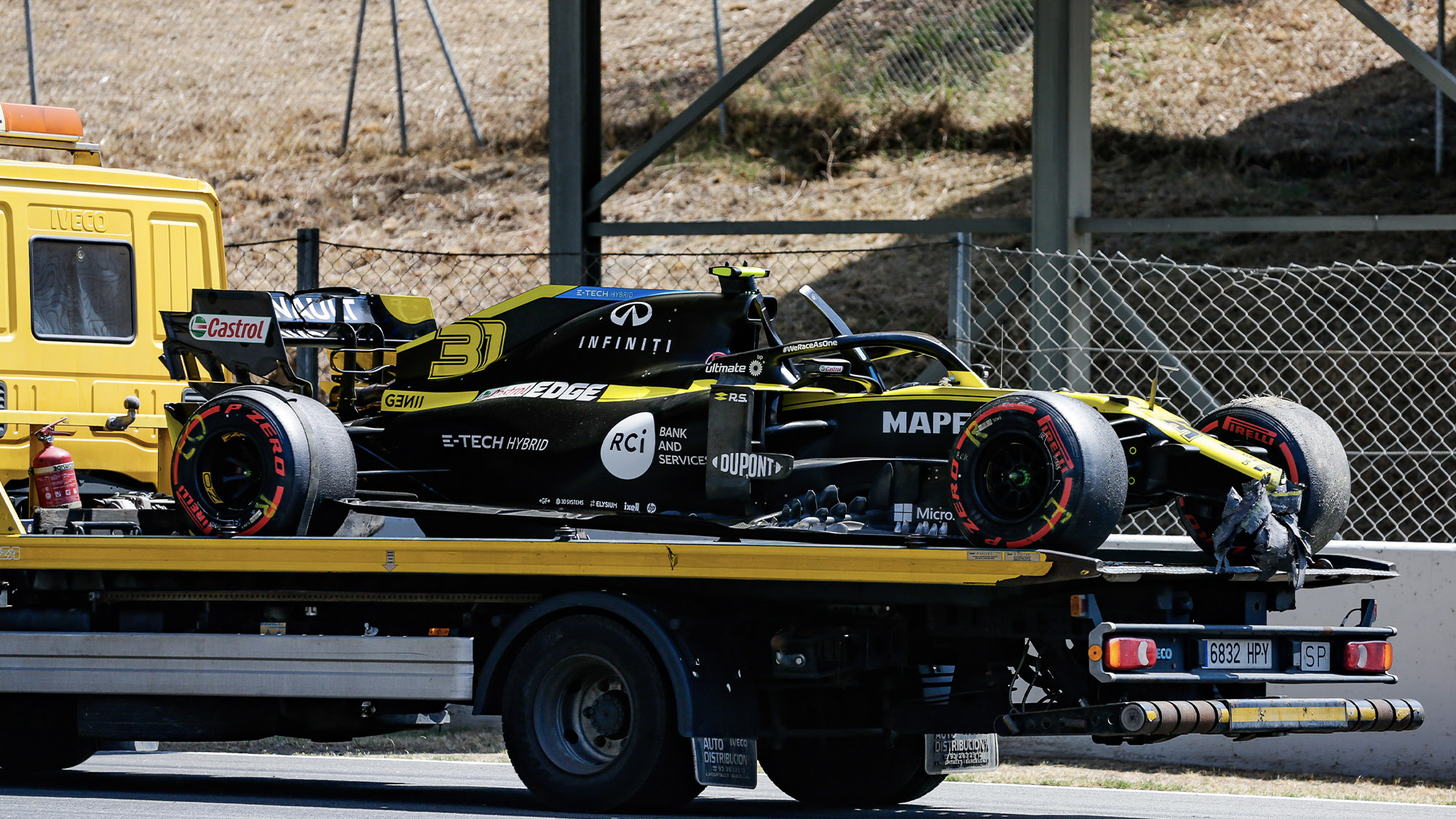 It was a tough day for Renault after the yellow cars demonstrated strong one-lap and race pace on Friday once more. Esteban Ocon is still struggling for one-lap speed vis a vis Daniel Ricciardo and an FP3 incident out of Turn Three with Kevin Magnussen certainly didn’t help.

After passing Ocon, Magnussen slowed and pulled to the centre of the road. Initially it looked like a cast-iron brake test, but how wrong you can be…
Magnussen had just finished a timed lap and, told of approaching cars on quick laps, he pulled to the centre of the road to free up the racing line. Telemetry proved that he was ERS harvesting and had not even touched the brakes.

Ocon, meanwhile, had just come out of the pits. He too, was warned of approaching traffic, was looking in his mirrors and did not see Magnussen slow. When he looked up he was almost into the back of the Haas and exited stage right into the wall.

Another record down for Lewis Hamilton, as he wins the 2020 Spanish Grand Prix in a zone of his own

It was Renault’s turn to ‘do a Red Bull’ and repair the damage in double-quick time to get Ocon out for qualifying. Esteban though, couldn’t quite repay them as spectacularly as Verstappen managed in Hungary and lines up 15th, 0.37sec adrift of Ricciardo, who himself is only two slots better off. So tight is that midfield scrap, however, that another four-hundredths in Q2 would have put Ricciardo into Q3.

From back there, given the difficulty of overtaking at Barcelona, it looks like Renault will have to rely on strategy if it is to emerge with a strong result. Ocon was one of just three drivers to one-stop at Silverstone last weekend, so don’t rule out at least one of the Renaults trying a similar thing tomorrow. But I shouldn’t think the prospect fills either driver with glee…

Tomorrow’s winner? Who knows. Spain in August heat is uncharted territory and Mercedes clearly has concerns. An emphatic win for the Black Arrows wouldn’t surprise. But then again, with the way Verstappen is driving and the way the Red Bull RB16 seems to cope with tyres in the heat, neither would a second on the trot for Max. For some, tyres might be round, black and boring. But, F1’s hyper-technology or not, they’re still the only thing in contact with the road.