Four-time world champion Sebastian Vettel summed it up: “If we’re honest, it wasn’t his race to win and he still won it.”

Lewis Hamilton has won 10 of the 14 races so far this season, but make no mistake, the victory that secured him a seventh drivers’ title was truly the drive of a champion.

Mercedes did not have the quickest package in Turkey – far from it. Qualifying had shown the raw pace struggles in cold and wet conditions, and given parc ferme regulations, there was no way of addressing that through set-up changes.

Starting from sixth on a track that was soaking we after pre-race rain, Hamilton saw the two Red Bulls struggle off the line and was down the inside in a flash into Turn One, but his own error at Turn Nine undid all the good work as Vettel, Max Verstappen and Alex Albon were back through.

Stroll leads into Turn One at the start 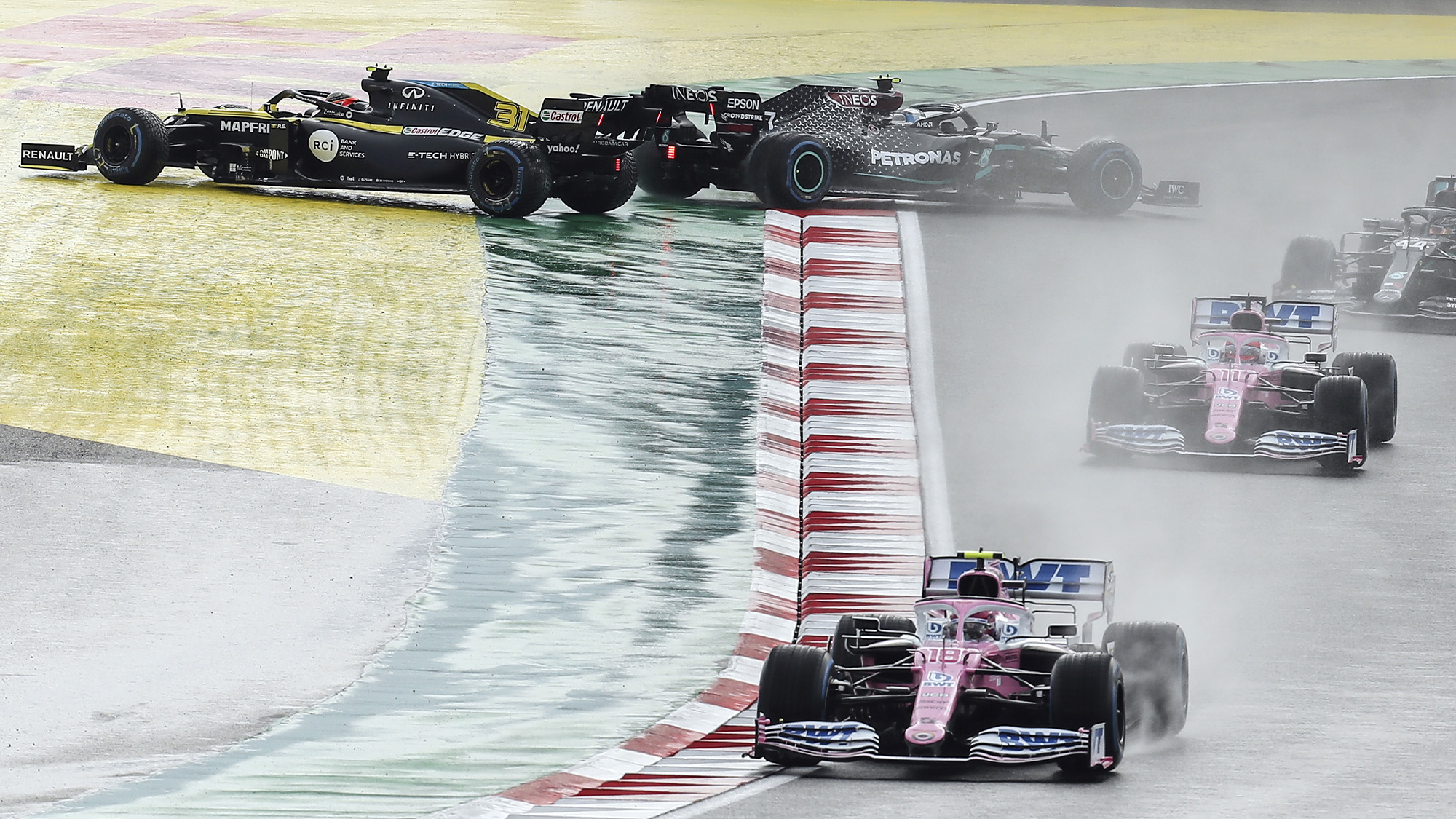 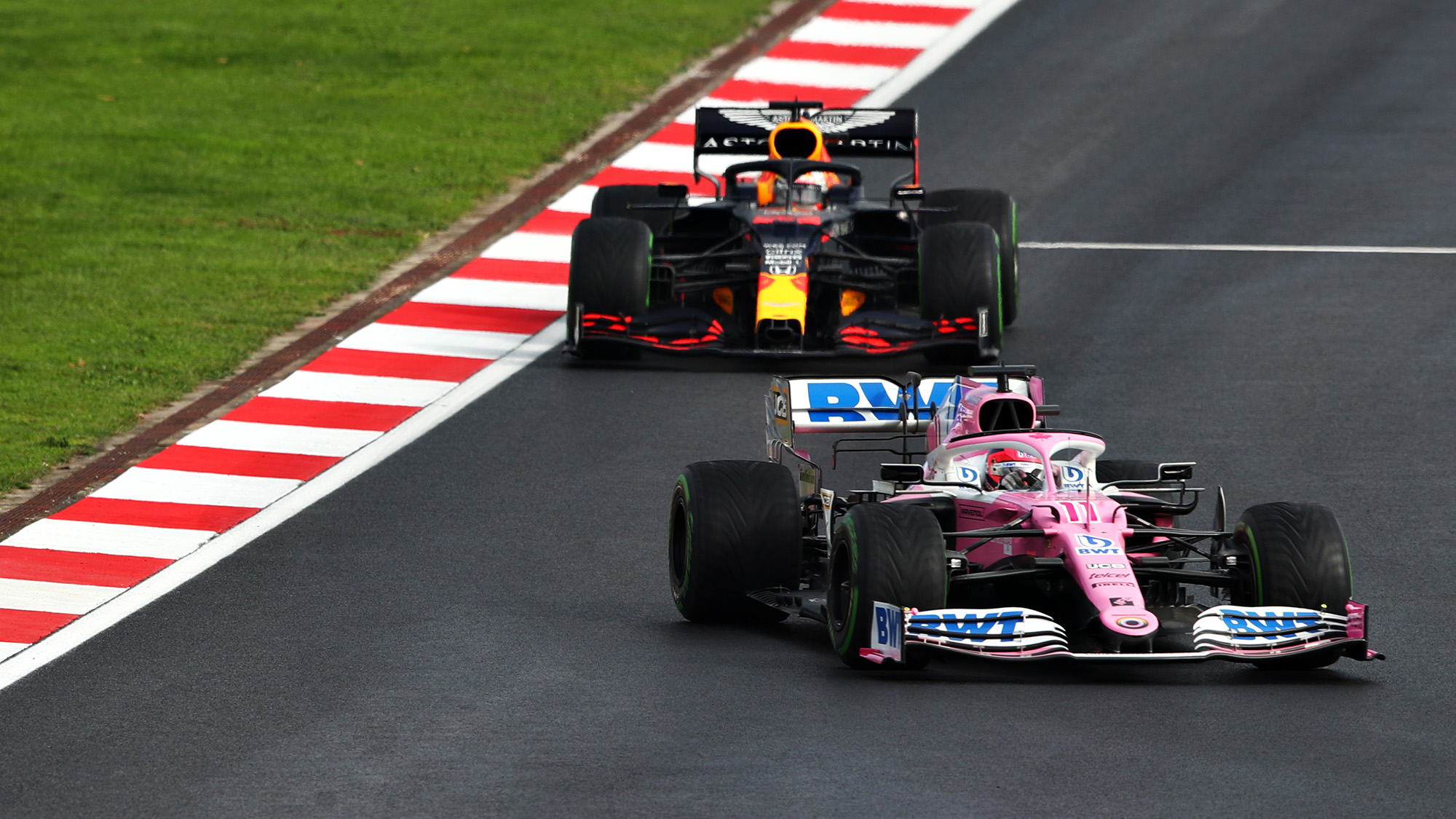 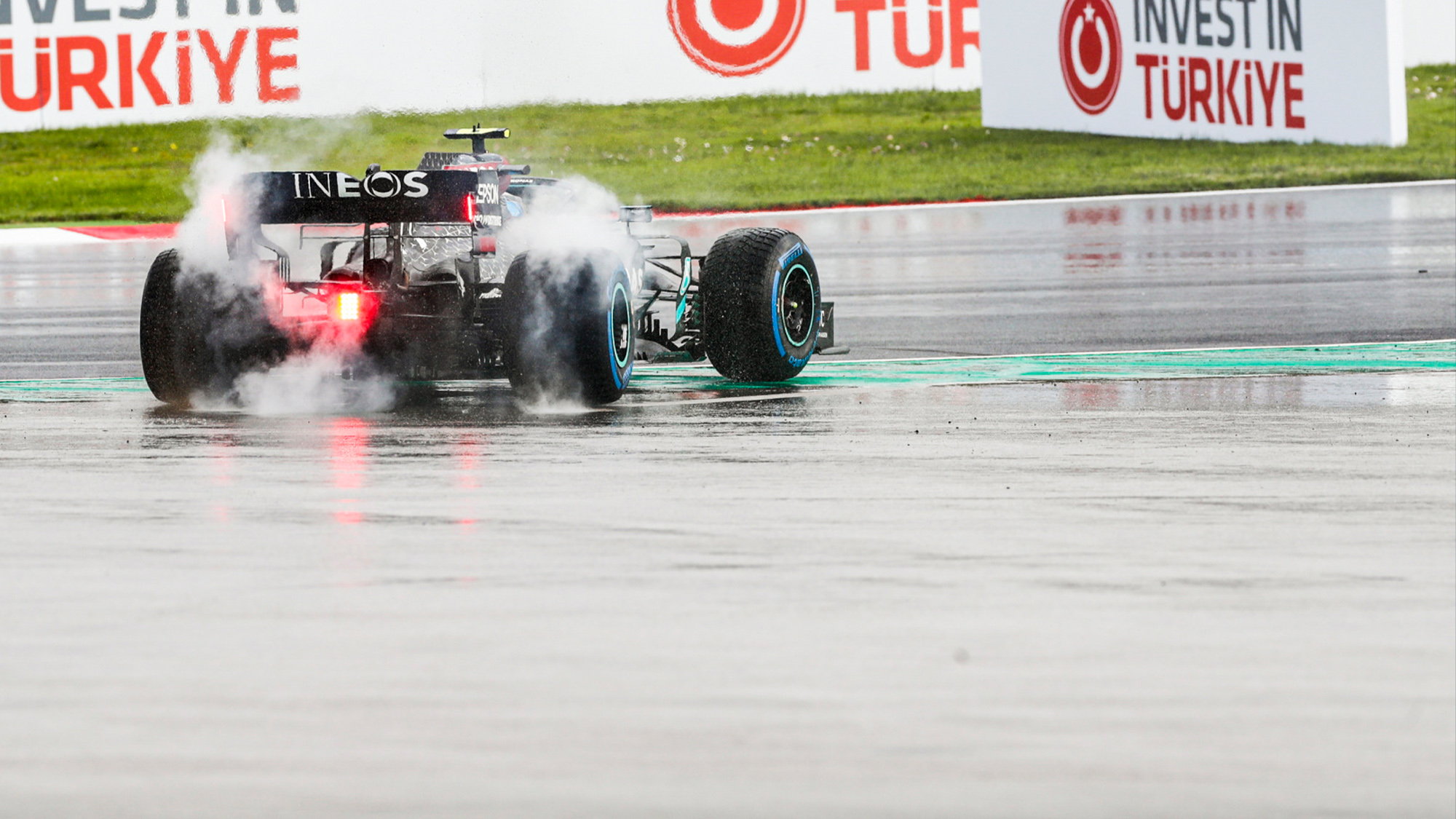 Bottas recovers from a other spin on a frustrating day 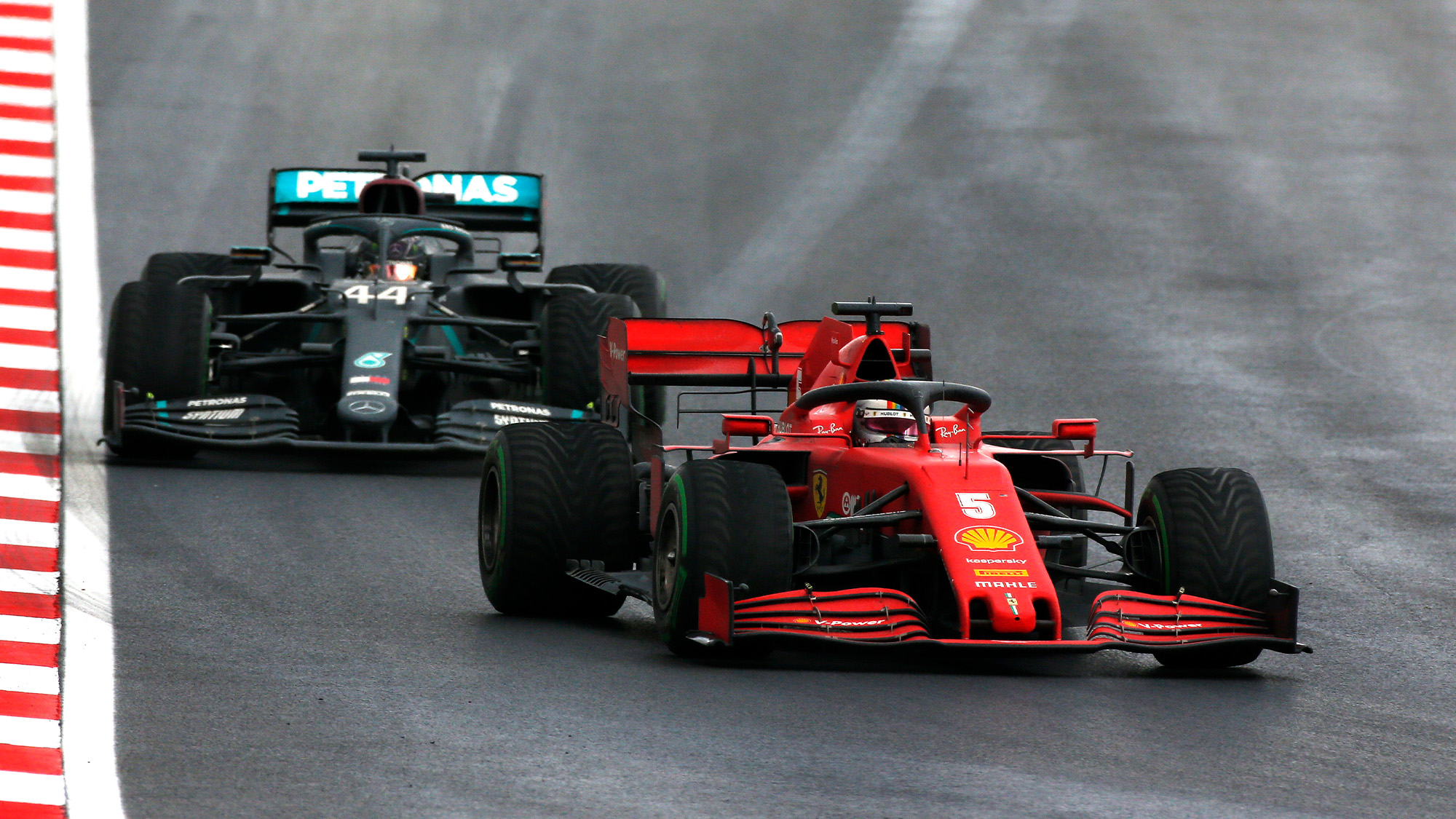 Hamilton was caught behind Vettel at the start, but then. watched the Ferrari drive away 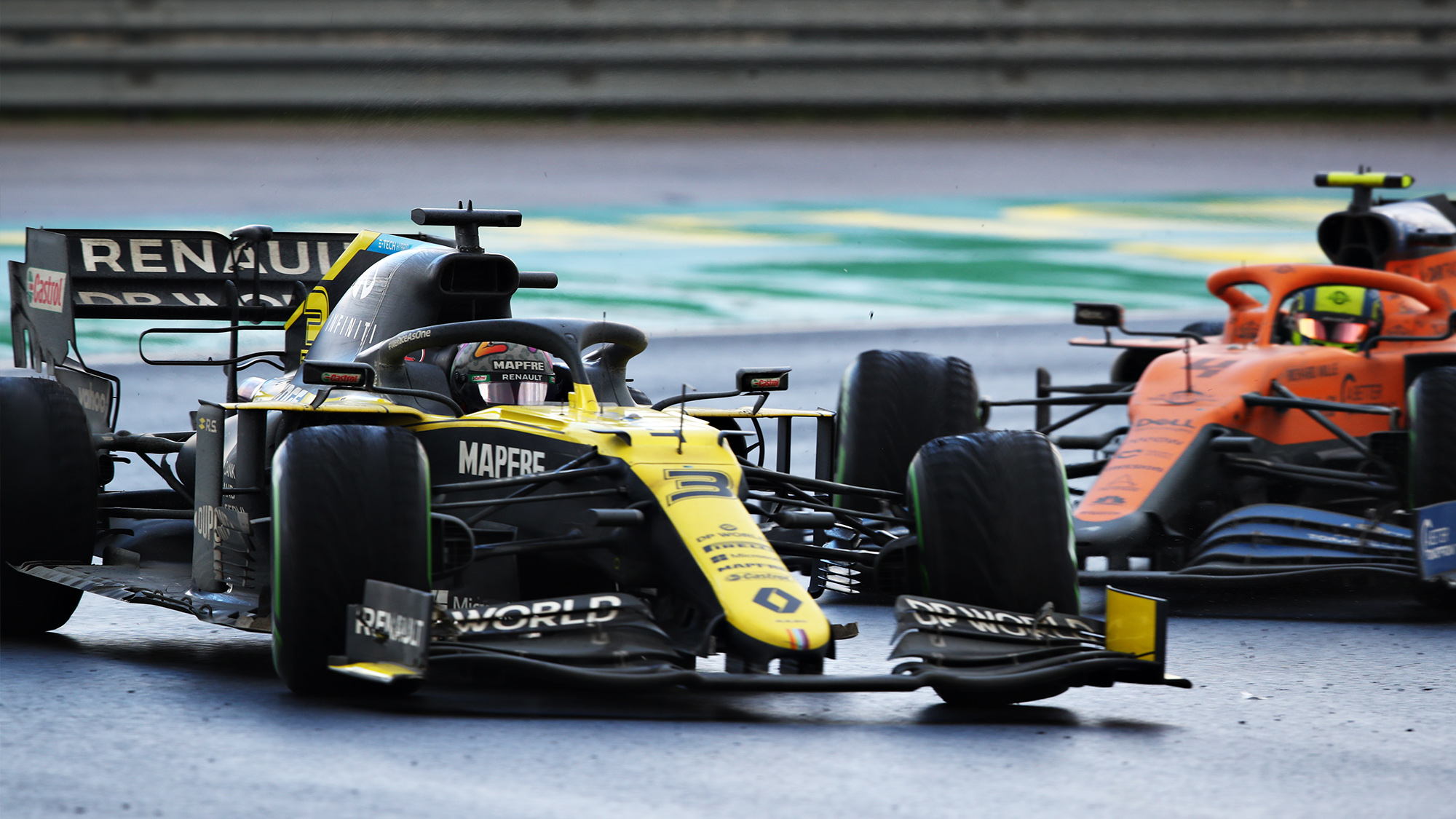 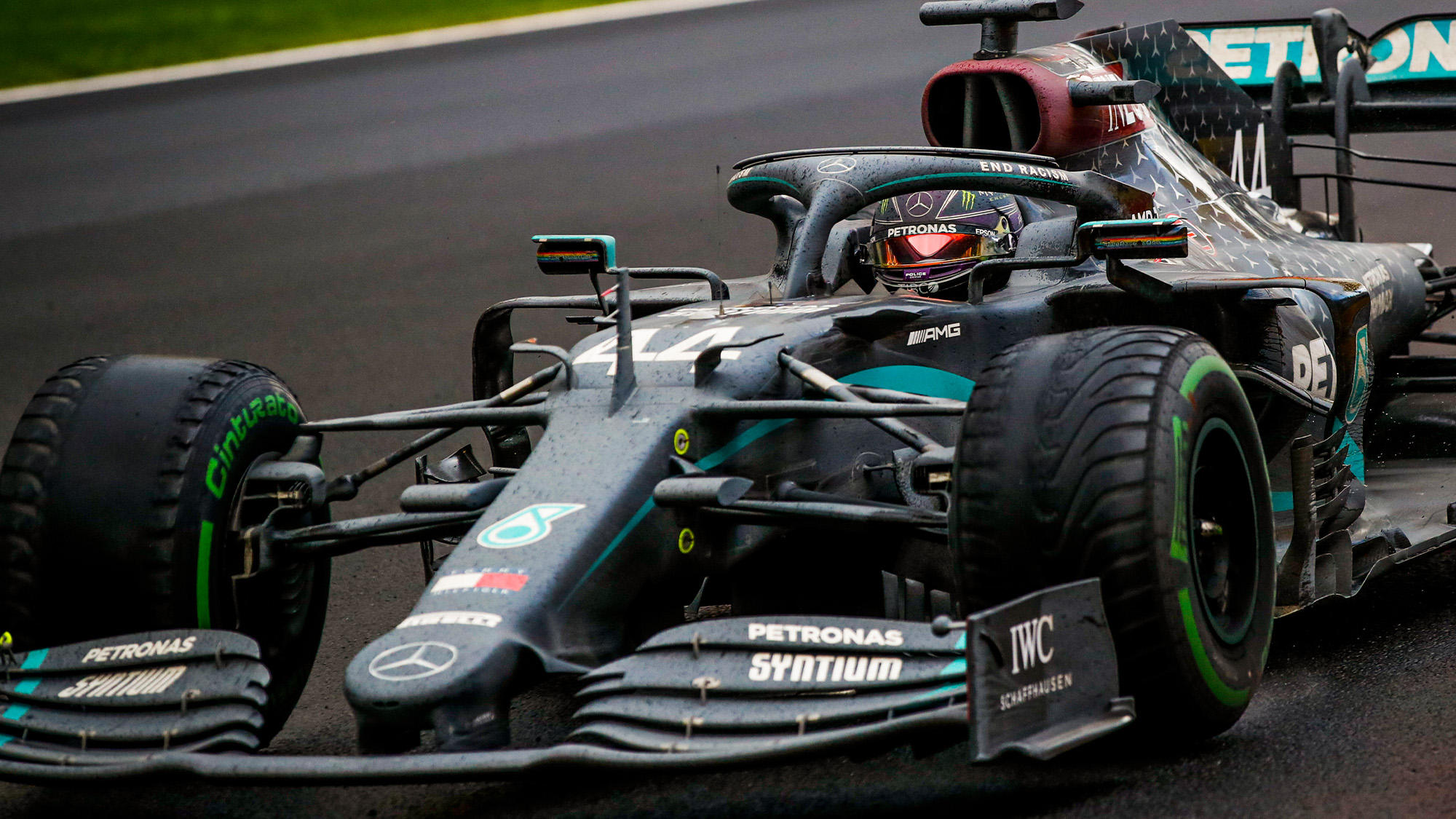 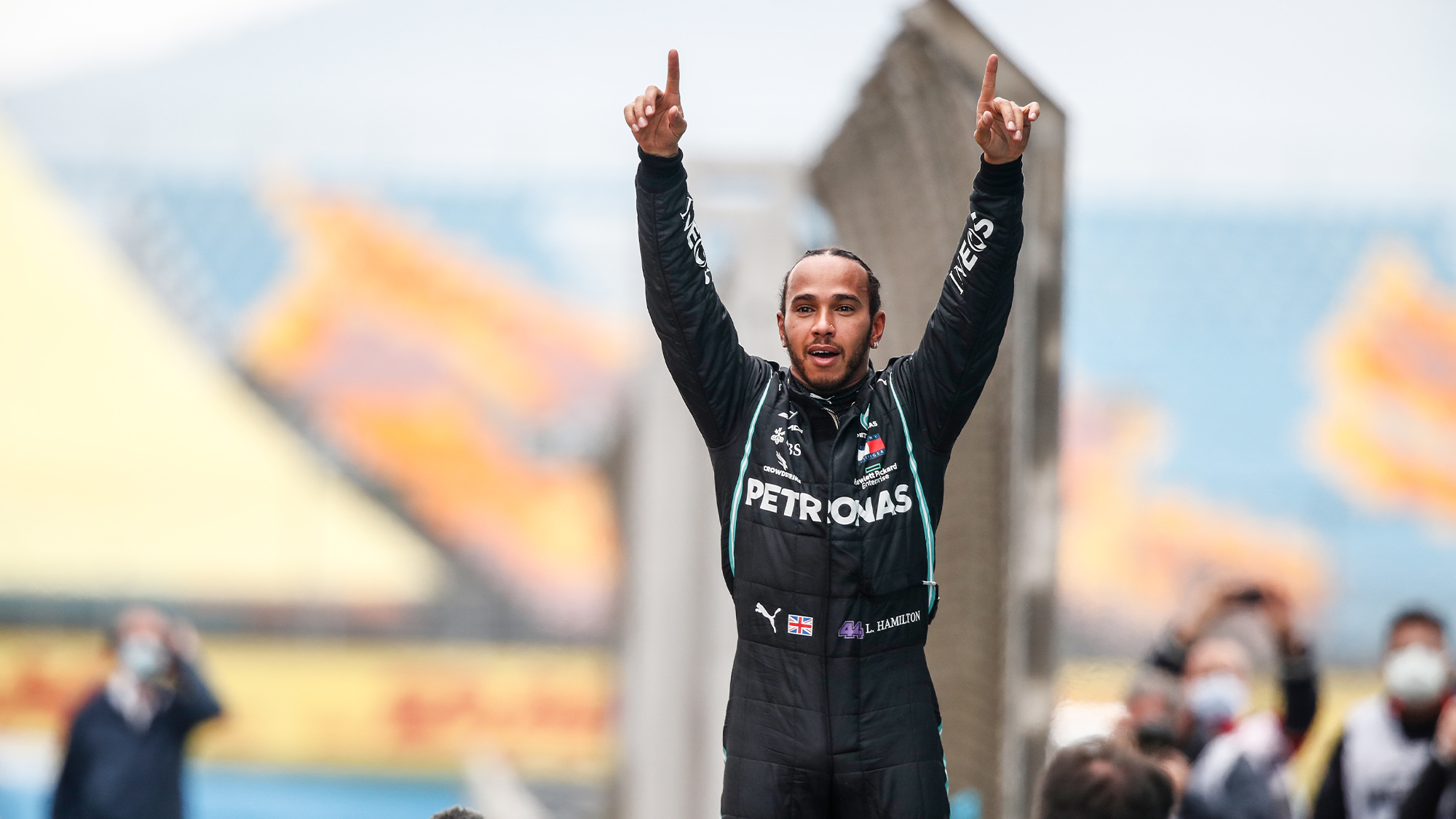 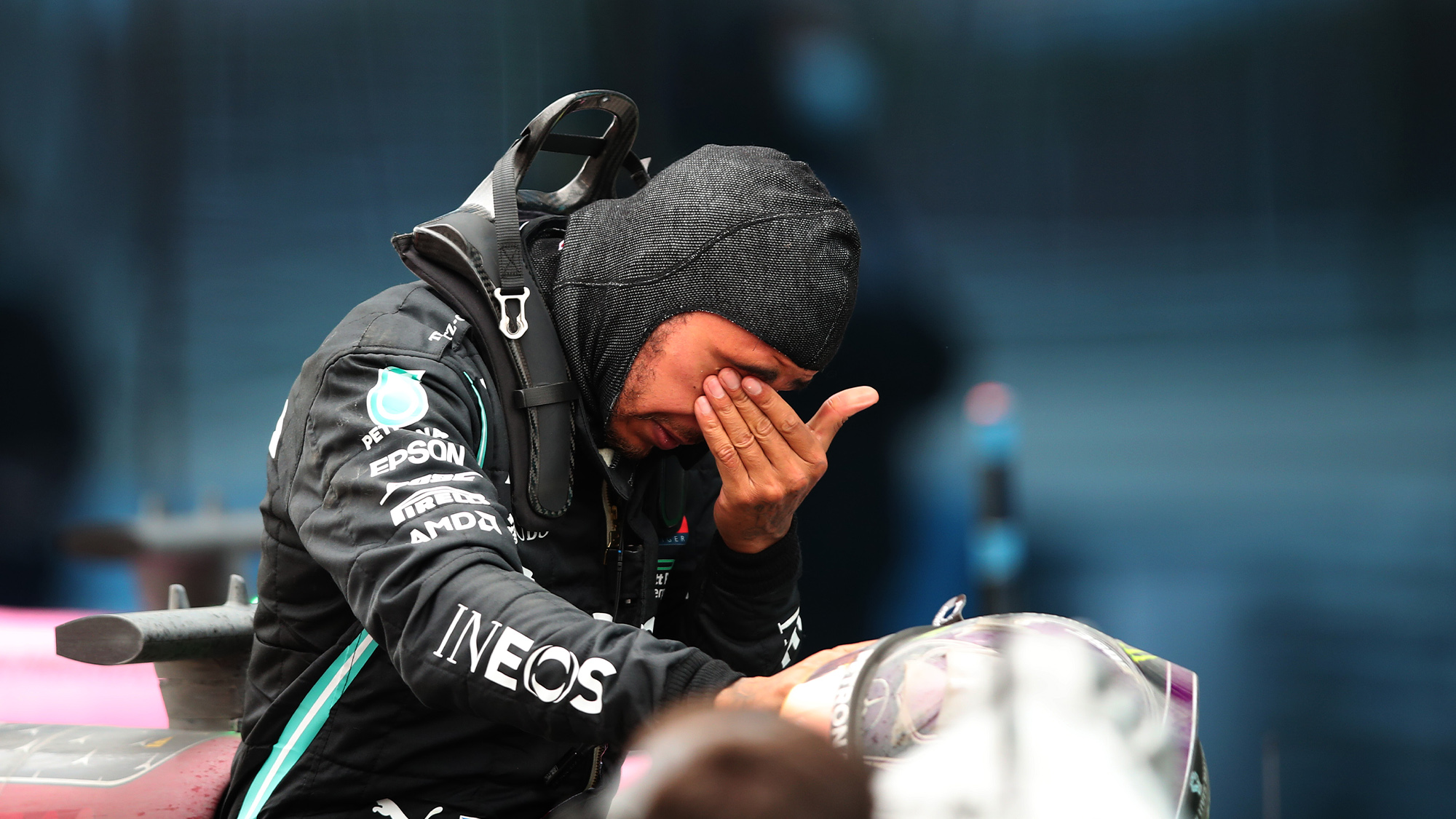 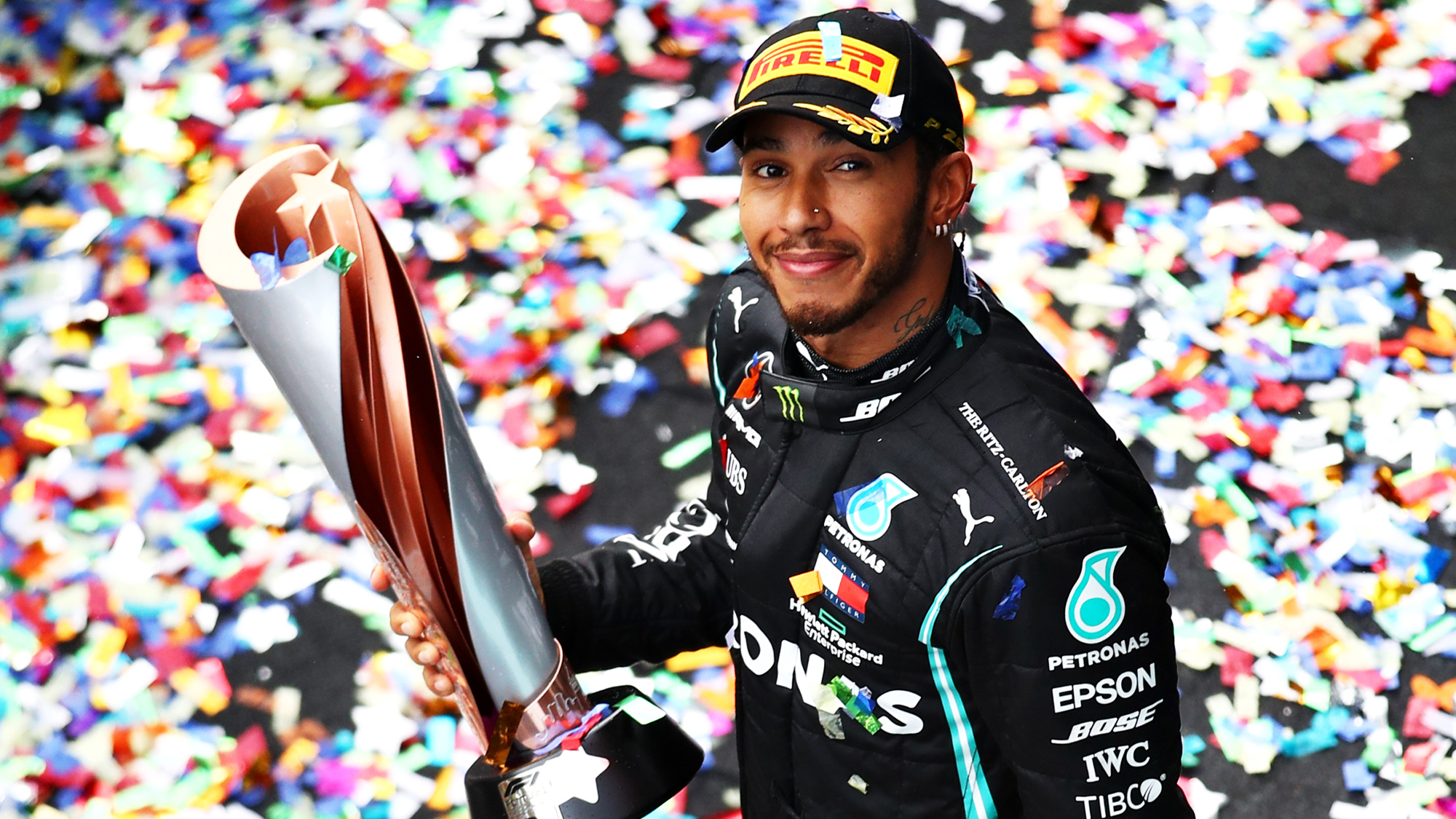 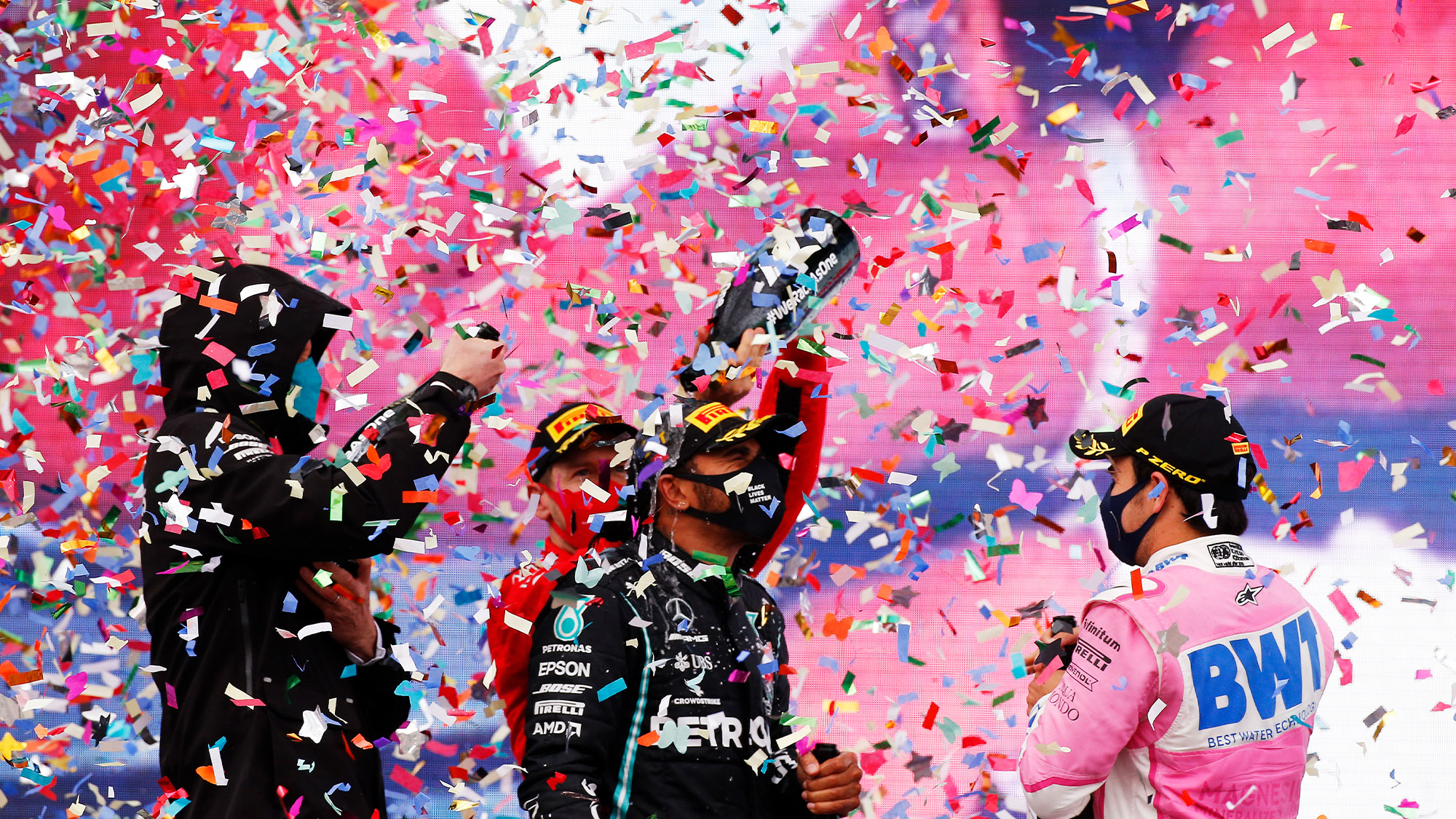 Wolff, Vettel and Perez celebrate with Hamilton on the podium 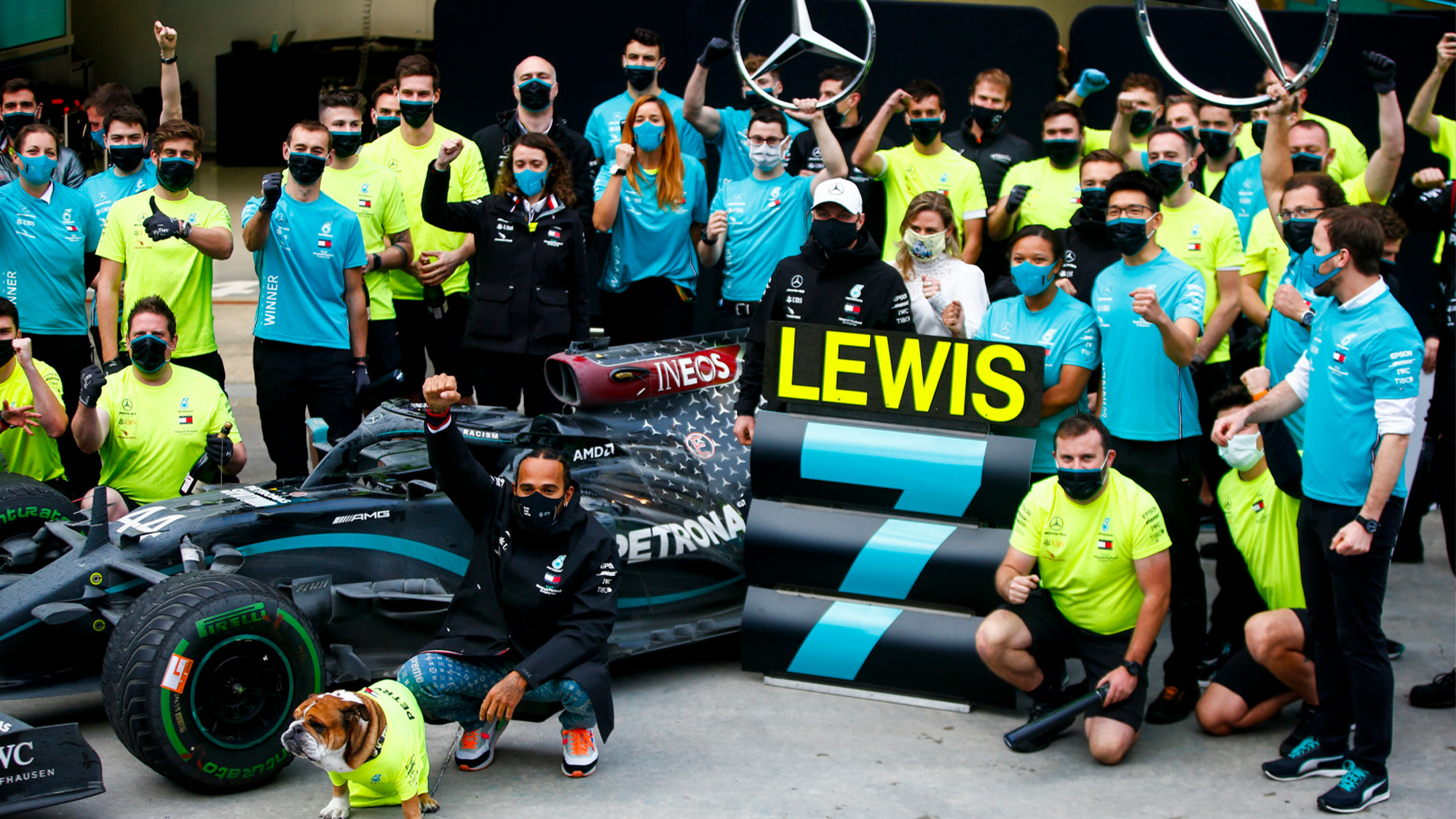 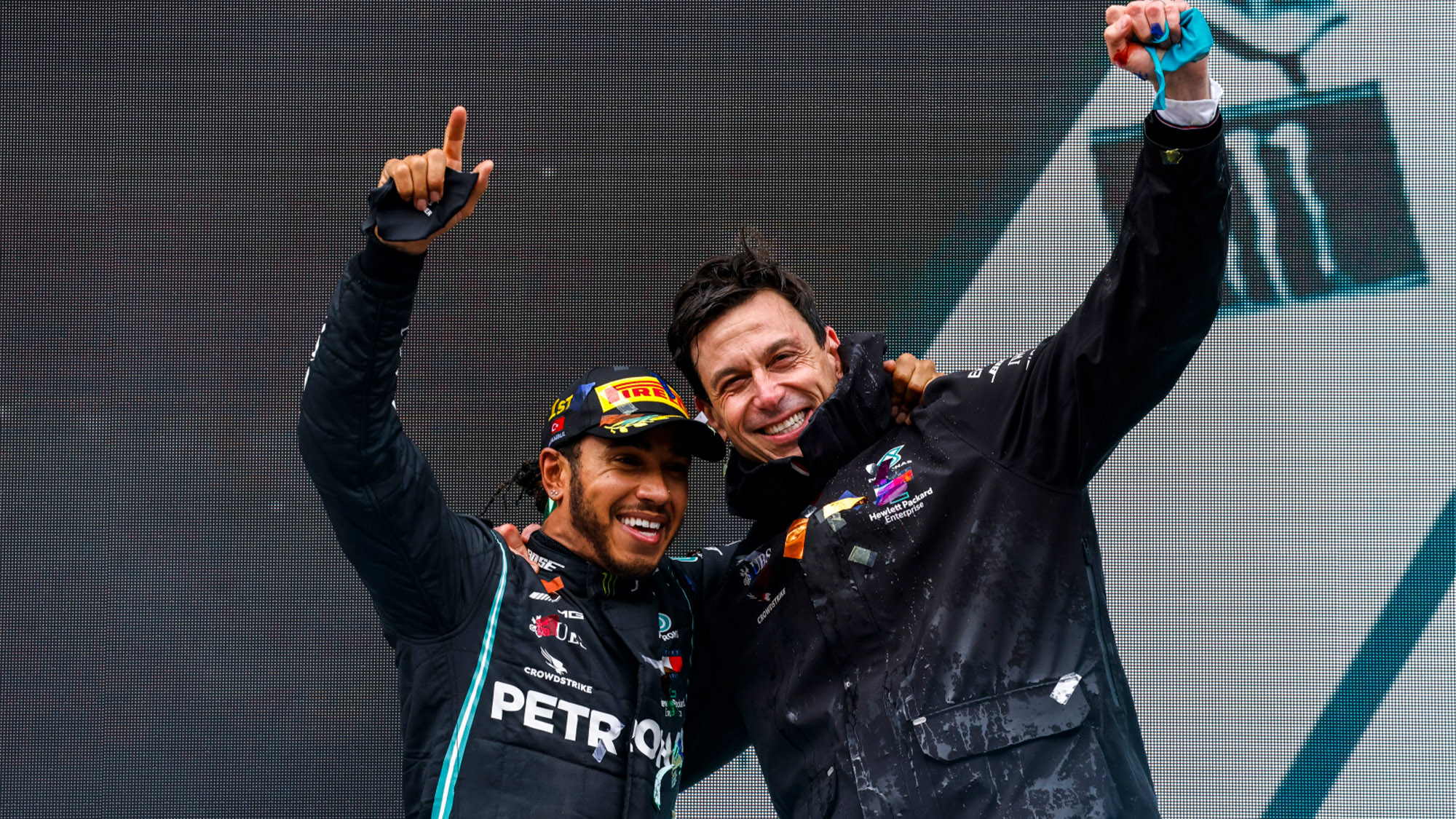 Wolff and Hamilton on the podium in Istanbul

The Red Bull was clearly a quicker package, but in the opening phase of the race so too was the Racing Point. Lance Stroll had outqualified Hamilton by nearly five seconds on Saturday and his first lap on the full wets was sublime, pulling 3.6 seconds clear of team-mate Sergio Perez and extending the gap to six seconds by lap three.

Perez himself had dropped Vettel by eight seconds by that stage, and everything looked great for Racing Point. Then Charles Leclerc – well outside the top ten – stopped for intermediates on lap six and started setting fastest sectors that forced a reaction from most of the field.

Vettel and Hamilton stopped two laps after Leclerc as the Ferrari started lighting up the timing screens, leaving Red Bull to push on as Max Verstappen – initially bottled up behind Vettel – showed his pace in clear air. Stroll then came in on lap nine and Perez had to do an extra lap before a slow stop of his own saw Stroll’s lead grow to ten seconds.

All of the action seemed to be behind and there was a growing feeling Stroll might walk away in the lead, but the slowly-drying track was throwing in plenty of variables. Verstappen — happier on the full wet — had to pit for inters as Vettel and Hamilton were much quicker, and he rejoined in a small gap between Perez and the multiple world champions.

But then Verstappen’s challenge disappeared as he stuck his nose down the inside of Perez at Turn 11 when fighting for second, ran wide into a wet run-off and was soon swapping ends.

“It’s just very frustrating to be honest,” Verstappen said. “I tried to follow Checo through that kink and completely washed out.

“Of course you can very quickly catch up with the guys but you can’t pass, there’s just one line round here and even that line is already very slippery so you’re just waiting for people to pit.”

“You’re leading by 10sec then you finish ninth, I don’t understand how that happens.”

The extra pit stop for flat-spotted tyres left Verstappen stuck in traffic and out of the frame, but Albon was flying on intermediates and moved into third, ensuring the top three were soon running within five seconds of each other.

“I feel a little bit confused actually,” Albon said. “Our starts were poor but then we had very good grip and could make our way through. Then when we boxed for inters we had incredible grip and then honestly at that point I thought we were in for a win and everything is going to plan.

“I had a little pirouette but still felt good, it’s a long race and anything can happen, but then put another set of the same tyres on and just had no grip and no pace.”

As the race ebbed and flowed, Vettel and Hamilton had already closed in to make it a five-car race – both passing Albon due to his spin – but strategy still had a key role to play. Leclerc again was first to go for fresh intermediates on lap 30 while the field was trying to wait for the track to dry enough for slicks, and it was the right call.

Probably only half joking, Bernie Ecclestone once proposed installing sprinkler systems around F1 tracks that would be turned on randomly to soak the surface and make things a bit more…

Leclerc’s pace once again started to force the hands of others Vettel, Albon and Sainz soon followed suit. Stroll was complaining that he was struggling with his tyres and Perez had closed right in while Hamilton was gaining quickly, so the understandable response was to pit the leader for fresh rubber too. But the fairytale ended then.

“I don’t know what happened,” Stroll said. “I don’t understand. We had so much graining on the first set of intermediates, we decided to pit because we were losing seconds per lap but I just don’t know where that graining came from. It just happened instantly.

“Then we put on new inters and just grained again and no pace. So we’ll have to look into it, it was pretty terrible today. It’s frustrating when you’re in the lead by ten seconds and then all of a sudden you finish ninth, I don’t understand how that happens.”

All the while, Hamilton’s pace on used rubber was stunning. He homed in on Perez and swept into the lead using DRS. Most of those who had stopped for new tyres were quicker than everyone but Hamilton, the champion-elect providing a sublime display of skill on worn intermediates.

The title was not in doubt at this point, because Valtteri Bottas was putting his team-mate’s performance into stark contrast. A Turn One spin avoiding Esteban Ocon – himself tapped into a spin by Daniel Ricciardo – at the start relegated Bottas to the back, and he spun again on the same lap in a sign of things to come.

There were four more spins for Bottas and the ignominy of being lapped by Hamilton on lap 46 as one Mercedes driver couldn’t handle the conditions, and the other was making a mockery of them through his outstanding talent.

Perez was soon gapped to the tune of a full pit stop, and Hamilton was suddenly in a position where he held the upper hand over drivers who had opted to stop for a fresh set of tyres. Although other cars were quicker, they were less consistent and not in range, and only the threat of a last-lap downpour could make Hamilton’s decision to stay out the wrong one.

“Today we knew coming here was already such a difficult weekend, we weren’t really massively disappointed with our qualifying position, we knew that we were kind of on the back foot and we did the best we could,” said Hamilton. “But we learned a lot. This is what we do as a team. There’s no blame game, we do hash it out and we try to improve our communication so that we can make moves forwards.

“We don’t always get everything perfect but today we had that small moment at the beginning of the race with the new tyres and then I couldn’t get past Seb for a while and at that point I could see Albon pulling away and I was thinking ‘jeez, this race is falling through my fingers’. But I just kept my head down, kept believing that I would just pick up pace at some point at some stage and that’s what I did.

“There was a point where Seb was pulling away from me and I couldn’t figure out at the time what it was. So I was checking my temperatures, I didn’t know whether it was because my tyres were overheating or they were too cold but I think I got through the real rough phase of the graining of the tyre and then it started to come back, the track was drying in areas and I was improving my driving lines all the way through the race and I started to pick up pace.

Hamilton was caught behind Vettel at the start, but then. watched the Ferrari drive away

“And then Seb pitted and for me I knew that wasn’t the right choice personally so I just decided to stay out and as the tyres got more and more slick, that’s exactly what you needed because fortunately that intermediate tyre holds temperature. If I had gone out on new slicks I wouldn’t have made it round, but it was the best decision.”

Hamilton had worn his tyres down to slicks and was still extremely quick, declining a late “safety stop” call from Mercedes with memories of China in 2007 in his head. He slid off the track in the pit lane on that occasion, and his tyres were in a similar state this time but still working.

“You remember I lost a world championship in the pit lane, so I learned my lesson from 2007 that’s for sure! I felt like I really had it under control and the grip was feeling good and I was going to deal with the rain if it dropped.”

On the trickiest of afternoons, Lewis Hamilton splashed through a wet and slippery Istanbul Park track and claimed a memorable victory on a difficult day in Turkey. From sixth on…

Behind, the fight for second went to the final lap as Perez was hunted down by the Ferraris, and Leclerc edged ahead towards Turn 12. But then Leclerc locked up and ran wide, allowing Perez and Vettel through, with the final drag to the line being won by the Mexican.

Sainz took a brilliant fifth from 15th on the grid – just 2.6 seconds behind second-placed Perez – while Verstappen and Albon limped home well adrift in sixth and seventh after another late spin for the Dutchman. Stroll’s misery was compounded when Lando Norris set fastest lap after fastest lap and beat him to eighth place, while Ricciardo rounded out the points.

But all were quick to praise the new seven-time world champion, who produced a drive that all of the greats that went before him would have been proud of.

Wolff, Vettel and Perez celebrate with Hamilton on the podium