The Dutchman was less than 0.1sec ahead of the Ferrari, with team-mate Perez 0.15sec further back.

Mercedes showed much improved form over its performance in FP1 and 2, with Russell fourth and Hamilton sixth. Carlos Sainz was placed in between them.

The resurgence of Haas carried on as Kevin Magnussen set a time just under a second slower than Verstappen to put him seventh, whilst both Alfa Romeos featured in the top ten too when the flag fell.

Here is how practice happened in Sakhir. 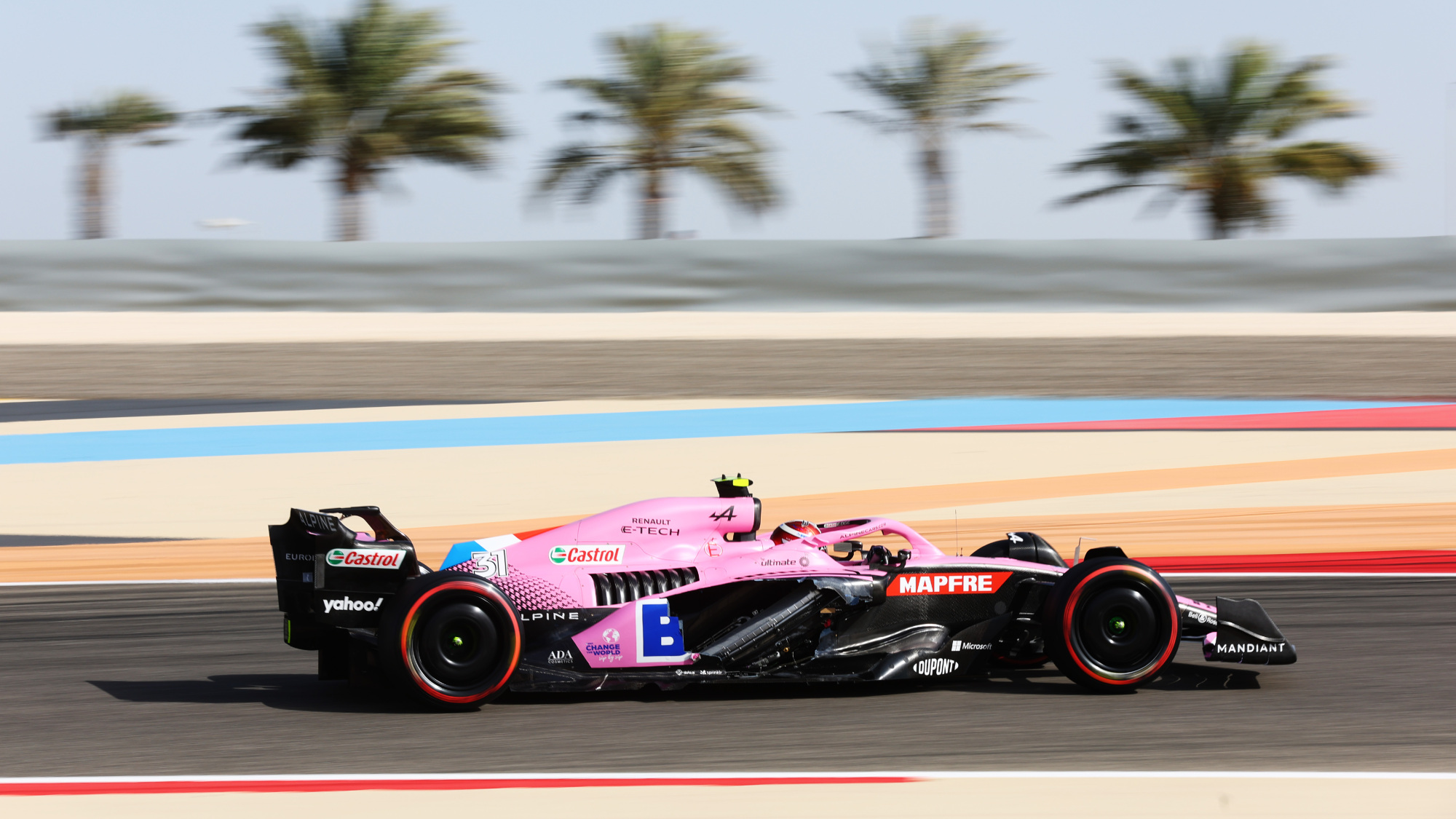 Charles Leclerc was the first car out on track in 2022, immediately out of the garage with an aero rake attached to the rear of his Ferrari as the track filled up very quickly.

Alfa Romeo had experienced technical gremlins throughout winter testing and the team’s season started in the same fashion. Valtteri Bottas reported misfiring issues on his outlap and immediately returned to the pits for an investigation.

A red flag was thrown just eight minutes into the new season with sidepod bodywork flying off of Esteban Ocon’s Alpine on the main straight, sending debris across the track and in need of retreiving.

Alpine brought an updated sidepod cover to Bahrain but the surviving cover was taken off of the Frenchman’s car while the red flag stoppage went on. The old specification was fitted for the remainder of the session. 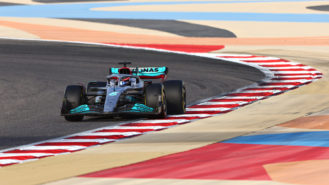 Mercedes: It could take up to five months to sort set-up issues

The light was back to green with 40 minutes remaining and once more, the track was immediately busy as most headed back out.

George Russell reported that his car was being affected by the wind quite badly before replays showed a piece of bodywork flying off of the Mercedes entering the Turn 1 braking zone. His car was porpoising badly down the main straight before the piece came detached.

Likewise, team-mate Lewis Hamilton was suffering with bouncing at top speeds bobbing up and down in the cockpit. The Mercedes drivers were 10th and eighth respectively with 20 minutes remaining.

Sergio Perez made it a Red Bull one-two on medium tyres, moving to within 0.3sec of Verstappen’s time at the top until Russell rejoined the track on soft tyres. Russell went top of the times on a 1min 34.629sec, just a tenth ahead of the lead Red Bull.

A spin for Charles Leclerc exiting Turn 11 riding the kerbs resulted in a quick spin and brief yellow flag in the first real showing of instability for a Ferrari car. He was able to continue on his way without a red flag.

Pierre Gasly was the next to take the top spot for AlphaTauri, lapping a 1min 34.193sec to go ahead of both Ferraris as Leclerc and Carlos Sainz improved to second and third places respectively on medium tyres.

A soft-tyred lap from Hamilton was good enough only for seventh place inside the final 10 minutes, 0.750sec down on Gasly’s table-topping time.

It's @PierreGASLY on top in the first session of 2022!#BahrainGP #F1 pic.twitter.com/7Ysl05h6mt

Once again the track filled up quickly but there was a hive of activity down at Mercedes to prepare Hamilton’s car for the start of the session. The floor was replaced on his W13 before he could get out on track.

Immediately Ferrari went to the top of the times, Leclerc ahead of Sainz once more with both on the medium tyres but by some seven-tenths of a second.

Verstappen put his first time in and went within half a second to go P2 while Hamilton complained of more porpoising issues. His first time was good enough for fifth only, 1.2sec down on Leclerc.

Sergio Perez was delayed getting out of the garage but did emerge after 15 minutes. His first lap was undone by a lock-up into Turn 8 but subsequently went fifth-fastest, bumping Alonso and Hamilton down the order.

With soft tyres fitted, Ocon popped up to second before Kevin Magnussen’s Haas displaced him, 0.062sec off of the Ferrari time on mediums.

Lando Norris couldn’t better that, moving up to third and was a tenth down on the Dane but Alonso was able to go quickest, a tenth clear.

Ferrari fitted the softs and were in a different league as Leclerc surged to the top spot with a 1min 32.263sec, 0.6sec quicker than the Alpine.

Perez couldn’t match that either, ending up sixth-tenths off but team-mate Verstappen faired slightly better. His 1min 31.936sec was good enough for the top spot.

Mercedes was experiencing different fortunes though. Russell went third-quickest but team-mate Hamilton was left eighth, 1.2sec down, albeit without using DRS on the second effort. He reported his front right brake was causing an issue, pulling under braking.

Leclerc almost stole back first but couldn’t quite make his second attempt work, 0.087sec down on Verstappen. Sainz filtered in another time to go third.

Gasly was down in 13th unable to replicate his FP1 form and was forced to take avoiding action on another flying effort in order to avoid the world champion, drifting on the racing line heading into Turn 5.

Leclerc was the next to encounter a slow-mover, almost hitting Yuki Tsunoda at Turn 8 after the AlphaTauri refused to move off line. The incident was placed under investigation.

The Haas duo of Kevin Magnussen and Mick Schumacher were looking strong with both drivers in the top 10 while Valtteri Bottas’ earlier issues weren’t holding him back in the second practice, the Finn ending the session sixth.

Valtteri Bottas got out early, still having suffered for not getting much running in his Alfa Romeo in pre-season and practice – things didn’t get off to a great start as he immediately went off track.

The Haas and Mercedes cars both went on track for installation laps but without any fast times set, the rest of the field hesitant to venture out.

Lando Norris did eventually clock a 1min 36.317sec on the mediums, but was immediately bested by Lewis Hamilton who used the soft tyres to go quickest by just under a tenth from his fellow Brit.

Bottas managed to utilise the C3s to get close to his former stablemate Hamilton with a time three tenths off before the Ferraris began to accrue laps.

It was a 1min 33.797sec which elevated Charles Leclerc to the top of time sheets, whilst his team-mate Leclerc was just over four tenths further back in second.

Perez reported early brake issues, but his team told him he simply need to bed his new pads in. The Mexican still managed second fastest with twenty minutes gone though with a 1min 34.160sec.

Lando Norris had a big oversteering moment his his flow-vis paint-daubed McLaren, as Verstappen then went top. A time 0.7sec set an ominous pace – 1min 33.035sec – to lay down a marker for the rest of the field.

Magnussen inserted himself sixth into a Mercedes sandwich, Hamilton ahead and Russell behind – the times 1min 34.256sec, 1min 34.263sec and 1min 34.433sec respectively.

On 33 minutes Charles Leclerc had a huge moment, a snap of oversteer sending him flying over the gravel trap, with the run-off saving the Scuderia car from hitting the barriers – the Monegasque gingerly drove his flat-spotted Ferrari back to the garage.

Hydraulic problems for AlphaTauri meant Yuki Tsunoda didn’t even make it out for a lap, whilst his team-mate Pierre Gasly occupied 14th with 1min 36.088sec.

Hamilton then assuaged some worries about the Mercedes car’s performance so far as he set a 1min 33.121sec, less than a tenth off Verstappen.

Williams continued to show progress as Alex Albon put in a 1min 34.868sec.

1min 33.053sec placed Carlos Sainz second, before Russell bested Verstappen by 0.1sec, as Mercedes appeared to have got its car into the groove.

More fast laps came in – a 1min 32.640sec vaulting Leclerc to the table’s peak, and then Verstappen went a tenth quicker.

Perez then popped into third, 0.2sec off his team-mate, whilst Hülkenberg looked like he’d never been away as he clocked a time good enough for 11th fastest.

Magnussen still looked sharp also – his 1min 33.437sec keeping him in seventh as the clock ticked down.

As the flag fell Verstappen was still fastest, but Leclerc less than a tenth away and 0.5sec covering the top six.