The Alpines and Alfa Romeos headed out first as teams tentatively felt their way into the first practice session in Jeddah.

Ocon set the early fastest time with a 1min 37.458sec, but was immediately bested by Yuki Tsunoda who clocked a 1min 36.531sec, both on the hard tyre.

It wasn’t long before Max Verstappen asserted himself though, a 1min 34.167sec on the hard compound taking him to the top of the time sheets.

Magnussen was told to come in and not downshift, suffering what appeared to be a similar problem to that which he suffered in Bahrain practice – the Danish driver wouldn’t make it out again during FP1. 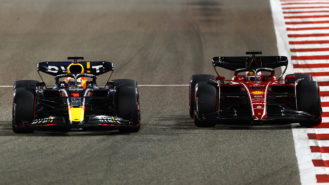 Was Ferrari formidable or just flattered? Saudi GP should reveal all — MPH

We are at an intriguing point in the season, given what became apparent in the opening round last week: a race-winning, pole-setting Ferrari, a super-fast Red Bull and a struggling…

Charles Leclerc put in the fastest time in FP2 after leading the first session too, despite ending his session being ended early by clipping the wall with his left front tyre.

Max Verstappen was just 0.1sec off the Ferrari, albeit on the medium tyre rather than the soft-shod Scuderia, whilst both Carlos Sainz and Sergio Perez were just 0.2sec off the ultimate pace.

Lewis Hamilton managed to get his Mercedes up to fifth, 0.4sec off the ultimate pace, with team-mate George Russell a further tenth off.

Read our full practice round-up below.

A 1min 33.021sec then meant that Sergio Perez leapt to the top of the monitors, Red Bull looking to amend for last week’s double DNF. Meanwhile both Ferraris were still sat in the garage, the Scuderia appearing cool proceeding its winning start to the season.

Verstappen then improved with a time 1.12sec quicker, whilst Hamilton inserted himself into second, albeit just over a second off the Dutchman and on the soft tyre.

Perez then set a 1min 32.689sec to go second as Magnussen climbed from his car whilst the team looked to remedy a hydraulic leak.

AlphaTauri looked to have reasonable pace in Bahrain, continuing it in Saudi as Tsunoda went second, albeit a second of Verstappen, with Pierre Gasly 0.2sec further back.

Tsunoda improved with a 1min 31.710sec, before a red flag was then brought out on 18 minutes – the fifty-metre mark become loose at the first corner and was struck by Lando Norris, strewing debris across the outside of the turn.

Cars headed out eight minutes later when was the circuit was clear, dust swirling as cars exited the pitlane. Come almost the half hour mark, neither Ferrari had still set a fast time, but this was remedied by Carlos Sainz who clocked a 1min 34.632sec on the hard compound, before Charles Leclerc put in a 1min 33.987sec. 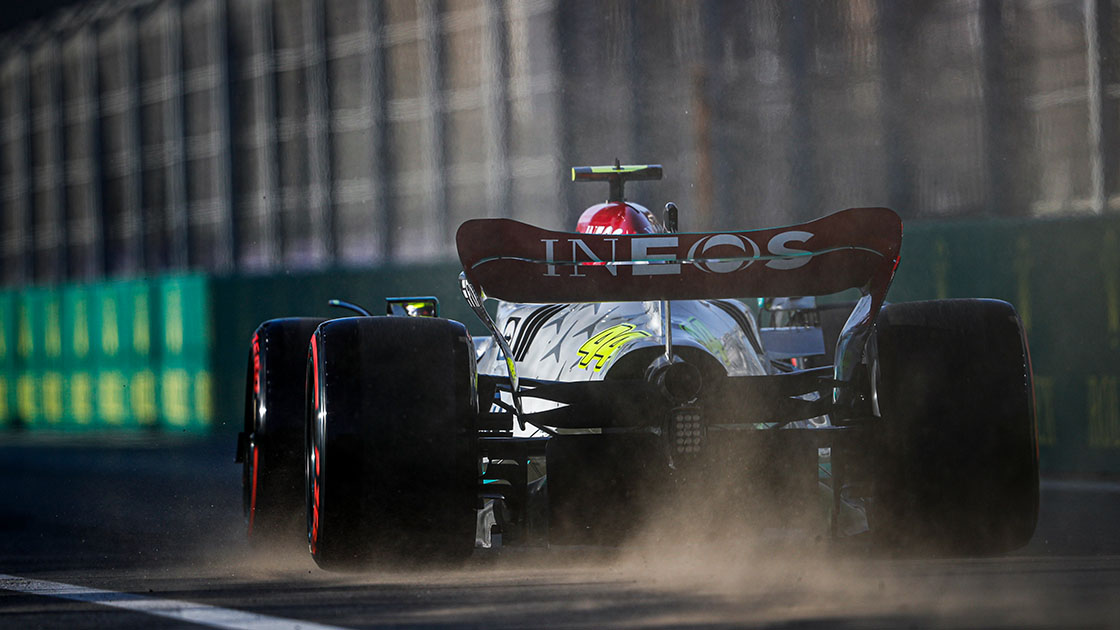 Cars had to deal with windy, dusty conditions

More and more cars began to sample the soft tyres, with Daniel Ricciardo going seventh fastest with 1min 33.037sec, but was immediately pushed down as Leclerc – who earlier had a moment which sent him off track – became fifth-quickest, a 1min 32.454sec his time, still on the hardest compound.

Hamilton reported that his Mercedes was still porpoising as in Bahrain, his team-mate George Russell 10th at this point as a result of his 1min 32.839sec.

Leclerc then had another moment, but this didn’t prevent him going second in the order – 1min 31.470sec his effort.

Fellow Francophone Gasly then hit the wall as he went second, 0.4sec off Verstappen, as the Dutchman too had a high-speed wiggle, asking his team if the wind had picked up and commenting how difficult conditions had become. 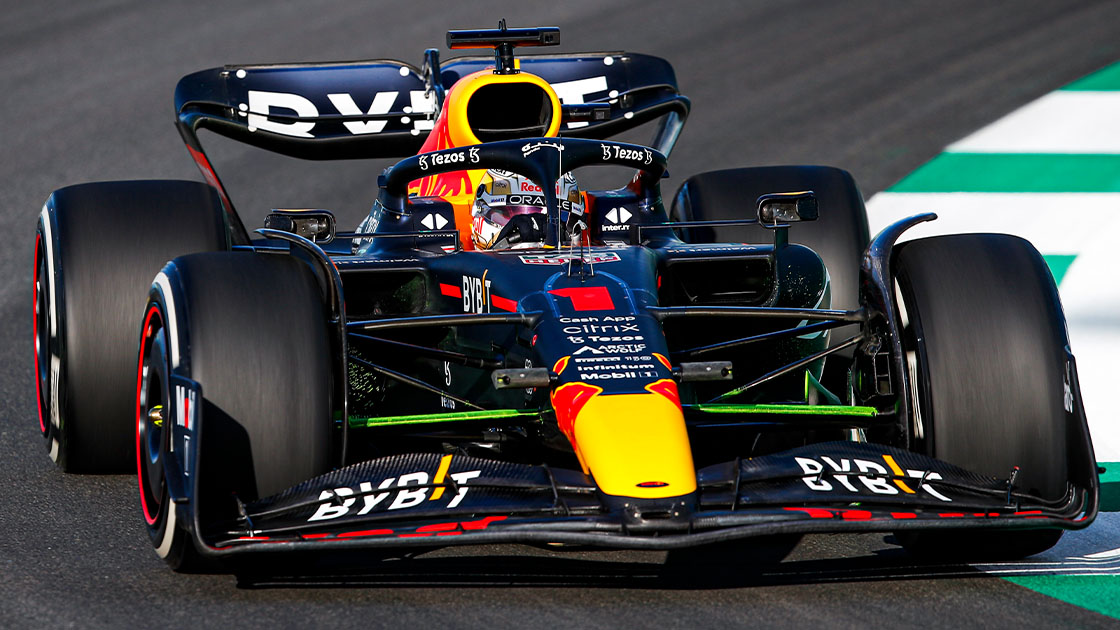 Carlos Sainz improved on his personal best in the first sector, but then found a moment of oversteer through the chicane which forced him to back out.

The Spaniard managed to elevate himself with a 1min 32.000sec to sixth on his next attempt, despite another inconsistent lap.

Nico Hülkenberg, stepping in again this weekend for Sebastian Vettel who has been affected by Covid, went 17th-fastest after logging a 1min 33.346sec.

A 1min 30.772sec though meant that Leclerc picked up where he left off as he hit first place, whilst Bottas looked handy with 1min 31.084sec in third.

0.116sec away was Verstappen in second, Sainz fourth in 0.367sec off and Gasly rounding out the top five, just over half a second off.

The second practice session was delayed by 15 minutes as drivers spoke to FIA officials about a suspected terrorist attack on an Aramco oil facility 20km away from the circuit, with competitors worried about continuing on with the race weekend.

Once the meeting was complete, almost all cars headed out early as the second session began, and again it was Leclerc who began quickest, setting a 1min 30.216sec using the medium tyre.

On the same compound his team-mate Sainz was 1.166sec behind, with Tsunoda 1.4se off the Monegasque driver. 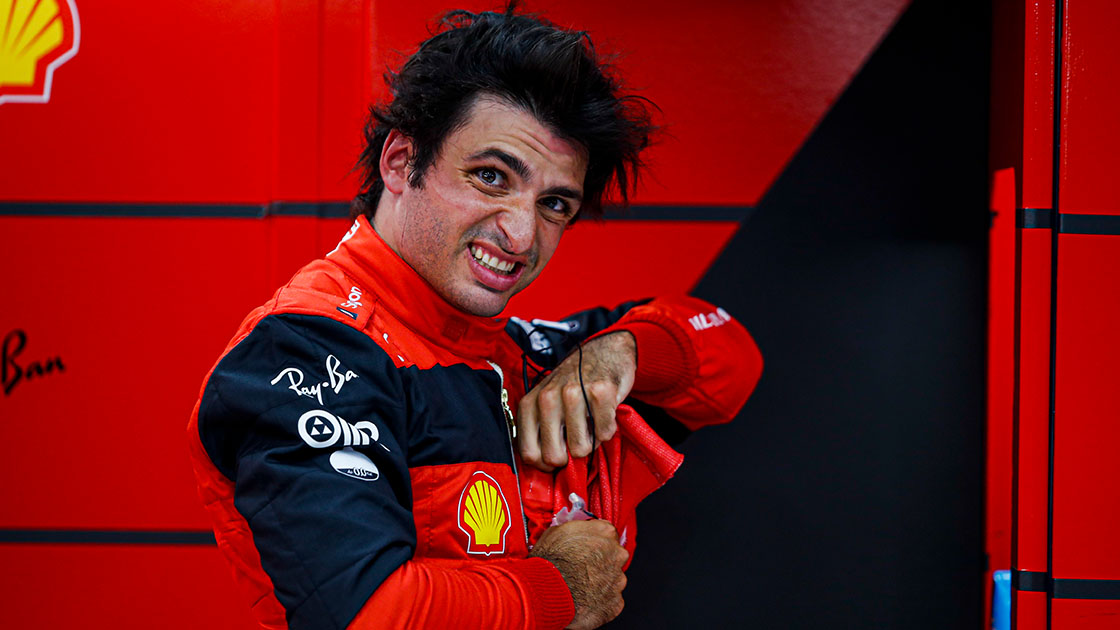 Hamilton then radioed in he needed to use his higher seat to give him higher reliability, whilst Perez’s 1min 31.117.sec meant he was fourth

Hülkenberg put on the soft tyres to try the quicker compound, a 1min 31.615sec meaning he was now in 12th. The German radioed to his team that it “didn’t feel like the soft tyre felt this morning” as many drivers seemed to lack confidence on the same compound.

The German’s Aston Martin team-mate Stroll managed to go slightly quicker, 1.1sec off Leclerc – whose first lap time was still fastest – as the Silverstone team work to move on from a poor showing in Bahrain.

Verstappen then claimed top spot with a 1min 30.214sec on the medium compound, before Leclerc immediately went fastest again by just over 0.1sec.

By halfway through the session the whole field were on soft tyres – Russell improved to fifth by posting a 1min 30.664sec, before Hamilton then displaced his team-mate. 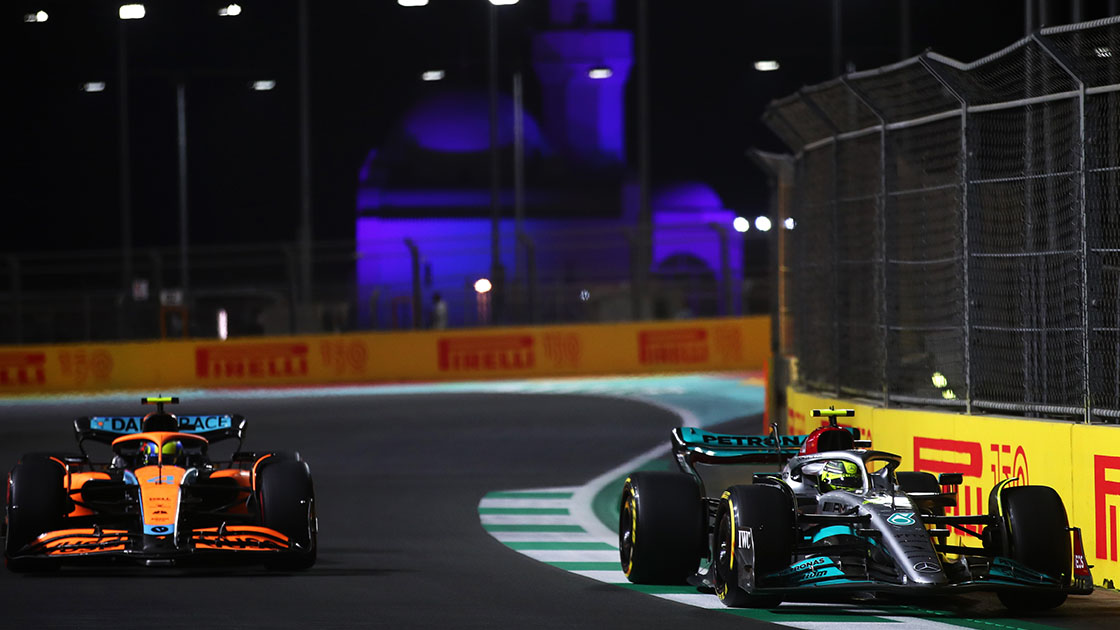 There were several close shaves as driver vied for track position

A double-yellow flag then came out at 27 minutes as Magnussen pulled over in Sector 2, the Haas again beset by reliability issues.

Once the green flag came out,both Ferraris the hit the wall, Leclerc slightly harder – reporting to his team that “my car is broken” slowly bring his F1-75 back to the pits. His session was over.

Drivers settled into longer runs, with Norris looking to help McLaren climb back up the order as he pounded round, whilst Verstappen and Perez both explored the durability of the mediums.

Ferrari then announced that Sainz wouldn’t be heading out either, the Scuderia’s running done for the day.

Latifi told his team that the rears of the mediums had gone after 14 laps, indicating tyre strategy could have a big role to play come Sunday.

With 90 seconds left Tsunoda reported that his turbo had gone, having to pull off the circuit and bring the session to an end, with Leclerc still fastest and Verstappen 0.1sec, the top four covered by 0.2sec.