“Grand Prix racing had certainly started on a new era of science vs the rest, with the rest found wanting,” concluded Denis Jenkinson at the end of his race report for Motor Sport. 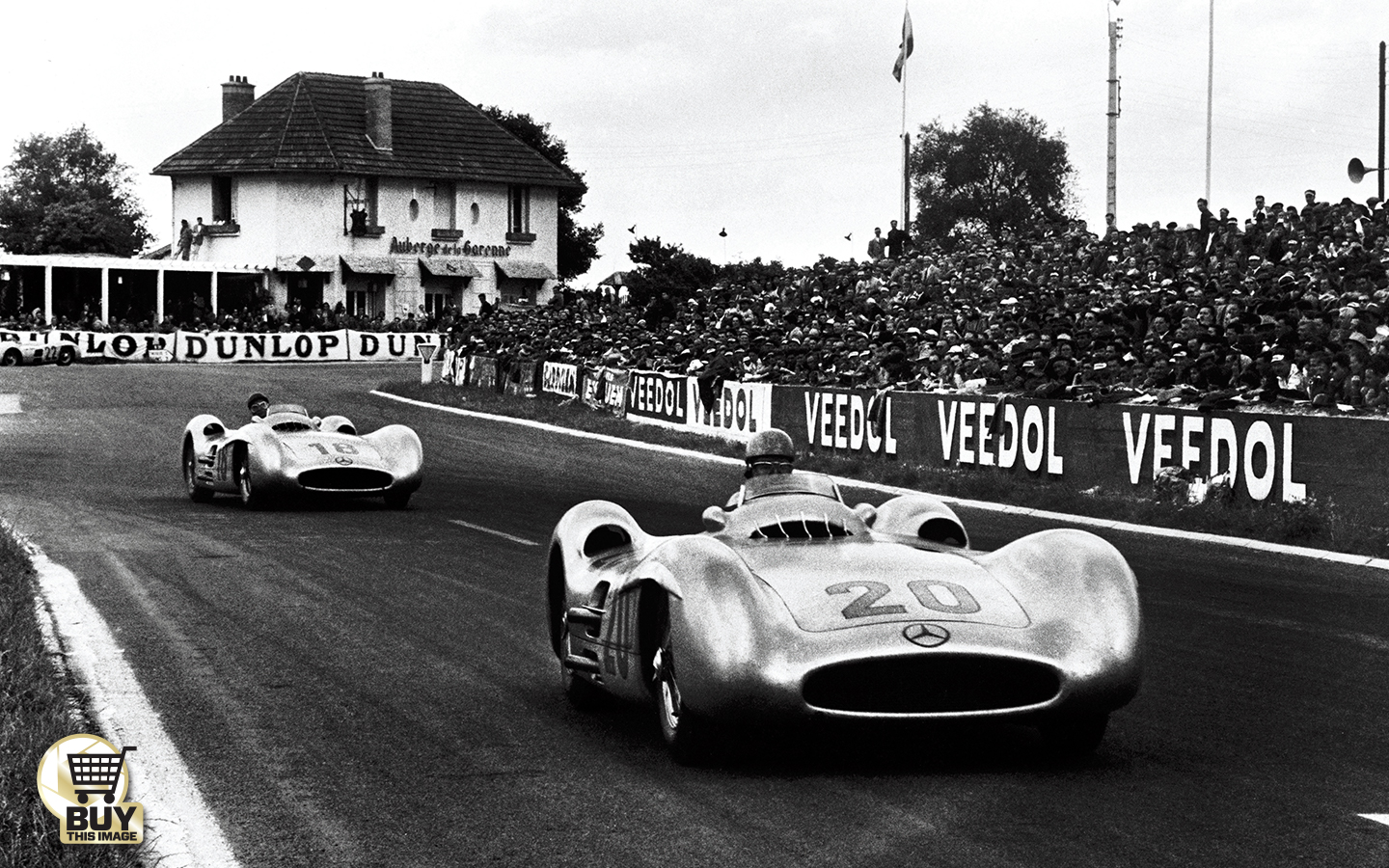 Just nine years after the end of WWII, the German might of Mercedes-Benz was back, resuming exactly where it left off in September 1939. The motor racing world prepared once again to be in thrall to the Silver Arrows.

It’s races such as this for which we long to time travel, and not simply because of the on-track spectacle of front-engined Grand Prix cars driven hard around the fast sweeps of an open road circuit. Given how much France had suffered in the six-year conflict, one can’t help but wonder how the crowds responded to this latest formidable German invasion. Yet all Motor Sport tells us of is fascination as the four closed-bodied streamliner Mercedes W196s – three race cars, one spare – rolled into sight for the first time.

On the grid, Juan Manuel Fangio, newly signed to Mercedes, was welcomed with the biggest cheer, despite the presence of Gordini, Jean Behra and the like. Even at this stage, with ‘just’ one of his eventual five world championships to his name, the maestro had won the hearts of the crowd – whoever he was driving for.

View the 1954 French Grand Prix on the Database and Archive

He and team-mate Karl Kling were forebodingly dominant at Reims, finishing a full lap ahead of third-placed Robert Manzon. Perhaps Alberto Ascari, on loan from Lancia to Maserati to allow an Italian presence at the GP, might have given them something to think about had his transmission lasted beyond the first few yards. Then Froilan Gonzalez characteristically gave his all, but his Ferrari couldn’t stand the pace: his engine blew just 13 laps in.

There was some hope in Hans Herrmann’s retirement with engine woes in the third W196 – perhaps these complex machines could be vulnerable after all – and trouble with Silverstone’s oil drums in the following British GP showed they could be beaten. But these were minor setbacks. The tide had turned, and it began that day in France.

Speaking to our editor-in-chief in June 1979, Fangio recalled just how remarkable the second era of the Silver Arrows had been during ’54 and ’55. “They were usually the fastest, of course, but they were also amazingly strong,” he said. “To win with them was easy. The only problems I remember were with the streamlined car in 1954 at the small Silverstone circuit, where they marked out the course with oil drums. It was raining, and visibility from the cockpit was not good, and I kept hitting the drums, so I was only fourth.

“Later that season I had an oil leak at Barcelona, and the next year my engine failed at Monaco. Otherwise, nothing went wrong. I drove 12 Grands Prix for Mercedes, with eight wins, one second, one third, one fourth and one retirement. In those days F1 cars were not so reliable, so the Mercedes was incredible in that way. Not so nice to drive as a Maserati, but you were almost sure to finish.” DS 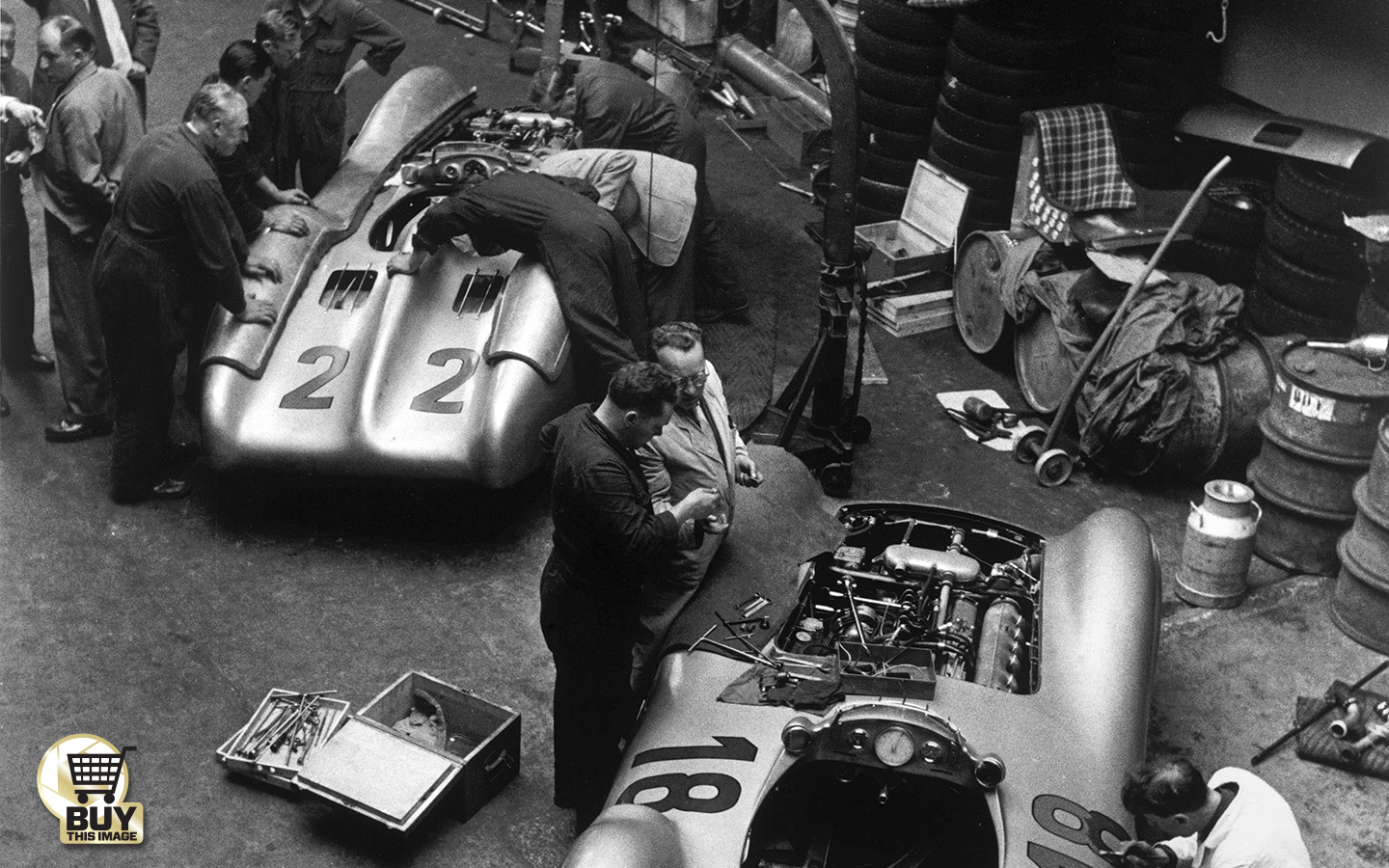