Formula 1 visited the United States for the first time in 1959 (if we set aside the Indy 500s that counted towards the championship in years past), settling on Sebring, Florida, for its inaugural Grand Prix. 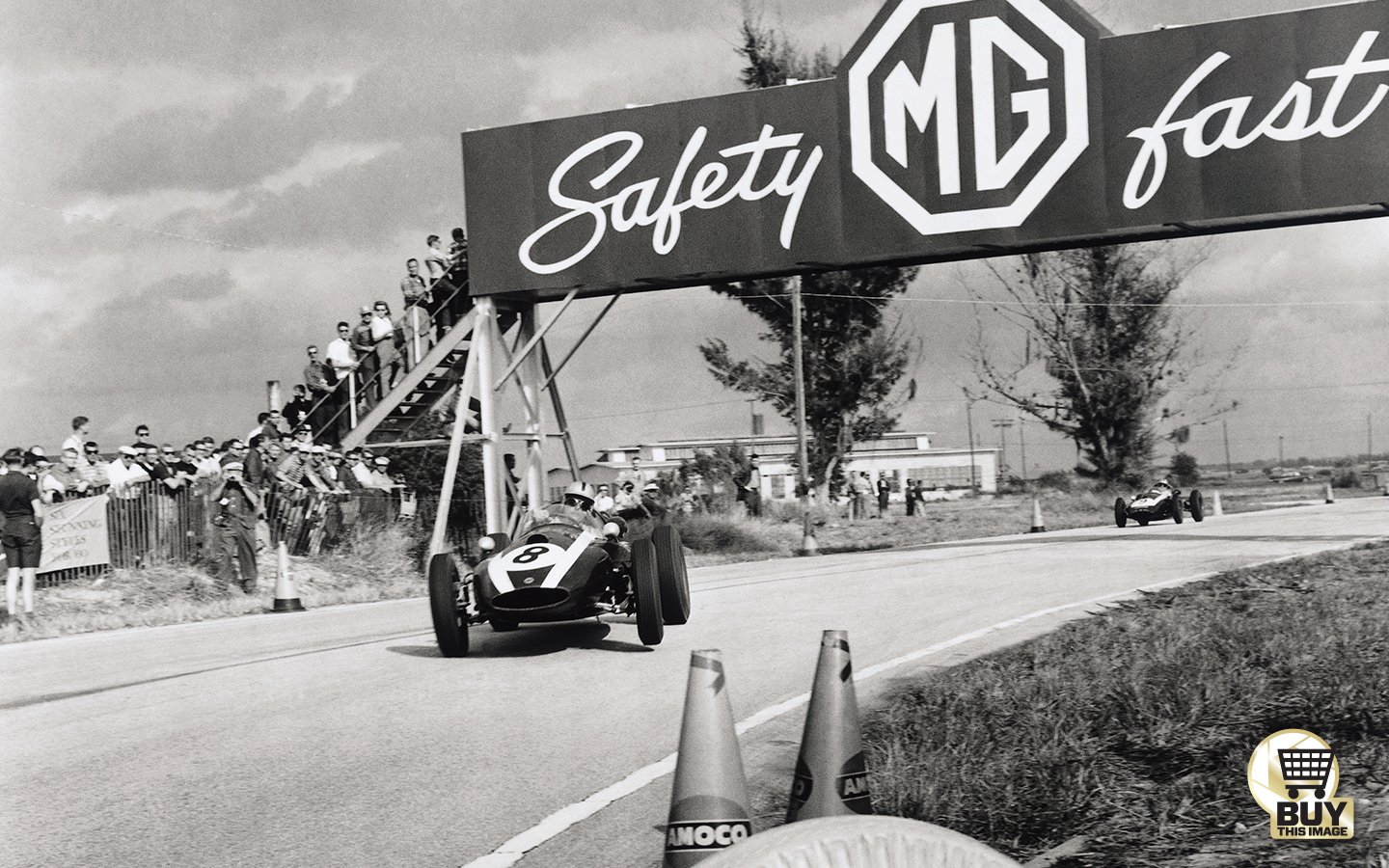 Already established on the sports car calendar, the venue was new to single-seaters and provided a challenge very different to even other airfield circuits. With punishing bumps and tyre-shredding surface changes it looked to be a race of attrition even before the cars ventured out of the pits.

Cooper’s Jack Brabham arrived in Florida with a five-and-a-half point lead over Stirling Moss in Rob Walker’s T51 and eight points ahead of Ferrari’s Tony Brooks. All he had to do was beat his two rivals and the championship would be his. If only everything were that simple.

Cooper’s plan was to have Masten Gregory – the team’s fastest but least consistent driver – play the hare and goad Moss and Brooks into pushing the mechanical limits of their cars on the bumpy track. But Gregory had sustained serious injuries when he leapt from his Tojeiro Jaguar as it careened towards the earth bank at Goodwood months before. The feat saved his life but cost Cooper its ace in the hole. Young Bruce McLaren was tasked with beating the two older drivers instead.

Moss lined up first on the grid with Brabham, Schell, Brooks, Trintignant and von Trips up next, setting up a Cooper/Ferrari showdown. McLaren lay 10th, scuppering the works team’s plans further.

View the 1959 United States Grand Prix on the Database

Moss rocketed away at the start, building a 10-second lead in the first five laps before a gearbox failure put him out of the running. Brooks was subject to a bump from team-mate von Trips in the first corner and, ever careful, pitted to make sure his car was safe to continue. The championship was now Brabham’s to lose.

The race settled down into an orderly procession, only punctuated by retirements and Trintignant in the remaining Rob Walker Cooper tearing after the leading cars. McLaren had made a good start and now lay second behind his team leader. The two works cars were taking it easy by this time; with Brooks still in the race Brabham still had to finish.

Even with Trintignant making up time the race slowed to a procession with Brooks behind in fourth. That is, until drama erupted on the last lap. Brabham, having opted to run a risky fuel strategy, began to slow, his Climax engine sputtering and finally giving up 400 yards from the finish line. He waved McLaren past, giving him the first victory of his illustrious career, and leapt out of the car. He pushed the Cooper to the line, losing out to Trintignant and Brooks but arriving in fourth. The new world champion collapsed, exhausted but jubilant. His was the first F1 championship for an Australian, the first for Cooper, the first for Climax and the first for a rear-engined car.

In one season the little team had upset the established order and ushered in a new era. ACH 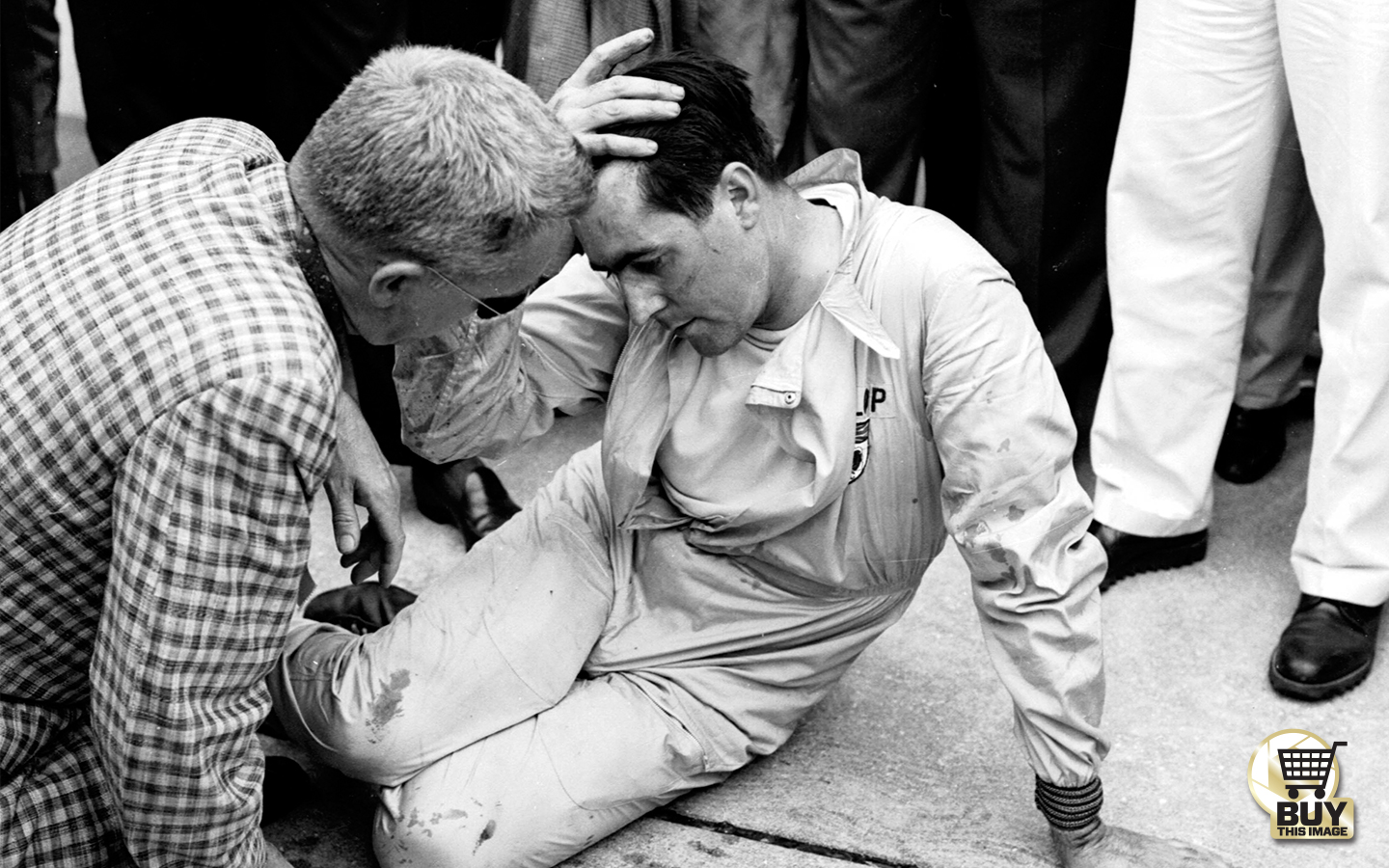