Eighties month continues with the story of how the DFV engines bid Formula 1’s top step goodbye, before their triumphant coda in the United States. For more explosive 80s, buy the latest issue 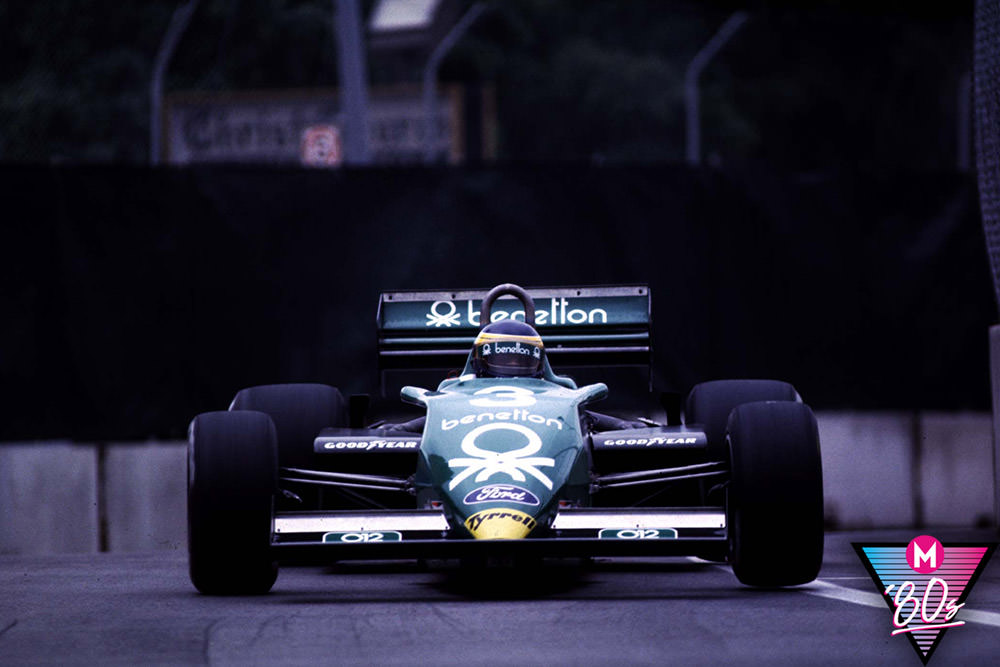 It was both a thank-you from a loyal and successful customer and a paying of his last respects.

All of Ken Tyrrell’s 32 Grand Prix victories – 10 as an entrant for Matra and March and 23 as a constructor – had been scored with a Ford-Cosworth DFV at his drivers’ shoulders.

But the writing was at last on the wall for Keith Duckworth’s V8 mechanical marvel after 16 seasons of excellence.

So Tyrrell felt it only right to stick a small Blue Oval on the nose of his cars before racing past FoMoCo’s global HQ.

Especially as this, he reckoned, would be DFV’s final chance of victory.

Except his wasn’t a DFV. It was a DFY.

Ambitious young Swiss engineer Mario Illien had coaxed another 25bhp – up to 520 – from the original while shaving 20kg.

Redesigned heads with integral cam-boxes featured a narrower included valve angle – from 32 to an asymmetric 22.5deg – that lowered the chamber’s pent roof and raised compression by 0.1.

The increase in torque at low revs was significant – albeit insufficient.

Turbocharged competitors were better able to compensate for the sudden introduction of flat bottoms and resultant drastic loss of downforce by dragging barn door rear wings.

Atmos were looking increasingly breathless as the second half of 1983 approached.

Keke Rosberg (Williams) and John Watson (McLaren) had scored remarkable victories – the 153rd and 154th for DFV – on the streets of Monaco and Long Beach.

They would star in Detroit, too – but were outshone by Tyrrell’s Michele Alboreto.

The relatively inexperienced Italian had ended 1982 brimful of confidence after scoring his maiden GP victory in the finale at Las Vegas – a result that lifted him to joint seventh in the championship.

Related: A racer and a gentleman

But his 1983 descended swiftly into chaos, with accidents – not all his fault – sidelining him at Rio, Long Beach, Imola and Monaco.

His stopgap 011, the work of Maurice Phillippe and Brian Lisles, suited a Detroit track with an average lap speed of less than 90mph – despite the removal of a first-gear hairpin, easing of its chicane and the covering of 70 manholes since its 1982 debut.

The second session was under a blazing sun that brought moisture to the surface and so its better times were recorded in the first 10 minutes.

Except Marc Surer’s P5 for Arrows – fastest Cosworth runner – which was set on his second run on Goodyear’s narrower front.

The latter A6’s featured an old DFV. Other teams were using a short-stroke version that Illien had also worked on.

He had done so somewhat grudgingly – though he always liked a challenge – and on the promise that DFY (with same bore, stroke and 11,000rpm limit) would be given its chance in a car.

The politics of Cosworth were beginning to needle him.

Only Tyrrell committed fully to DFY and it had to wait until May for an engine that had had its first dyno run in September 1982.

A fresh unit blew up during morning warm-up at Spa and an interim engine was fitted.

Detroit, on 5 June 1983 was, therefore, the definitive DFY’s race debut.

Alboreto had qualified sixth – his best of the season albeit almost eight-tenths slower than Surer – and was revelling in the increase and better spread of torque from 6500rpm.

Rosberg, suffering a head cold, was 12th and Watson, unable to put sufficient heat into Michelins constructed for turbo grunt, was 21st.

Rosberg passed Alboreto for fourth on lap eight and was second by the time of a scheduled stop on lap 29. By which time non-stopper Watson was in the points.

Alboreto was planning to run straight through, too. But surely Nelson Piquet would have to stop. Brabham had reinvented the pitstop after all.

The Brazilian’s BT52 had led the early stages from the outside of the front row – but put up little resistance when Ferrari’s pole-sitter René Arnoux hustled past on lap 10 of 62.

The same was true when Rosberg lined him up for second 10 laps later.

And when Arnoux re-emerged from his stop, also on lap 29, still in the lead it seemed that whatever strategy Brabham was employing had backfired.

Two laps later the Ferrari was halted by electrical failure.

Alboreto was now second and – as slowly it dawned that Piquet was not planning on stopping – applying as much pressure while looking after his Goodyear Bs.

Piquet, in truth, was in control, running his BMW ‘four’ at DFV ‘boost’ to hold the gap between 1-4sec depending on traffic. Then on lap 51 came the twitch that presaged a left-rear puncture.

Within a handful of corners Alboreto assumed a lead that he was to hold to the finish.

Rosberg, a charge on fresher Cs delayed by a sticking right-rear, finished second while Watson, whose Michelins enjoyed a second wind that included the race’s fastest lap on lap 55, was third.

Fourth-placed Piquet’s was the only turbo car in the points, with Jacques Laffite (Williams) and Nigel Mansell (Lotus) mopping up the remainder.

By which time Illien’s engine in 2.65-litre turbocharged form was dominating CART.

He and business partner Paul Morgan had left Cosworth before the end of 1983 having formed the relationships with Roger Penske and Chevrolet that helped found Ilmor Engineering.

Some at Cosworth reckoned its new rival’s 265-series of engines a DFY ‘clone’.