Simon Arron continues ’80s month as he recalls a trip to Silverstone for the 1981 British Grand Prix equipped with the A to Z of ale – and not much else. For more explosive 80s, buy the latest issue 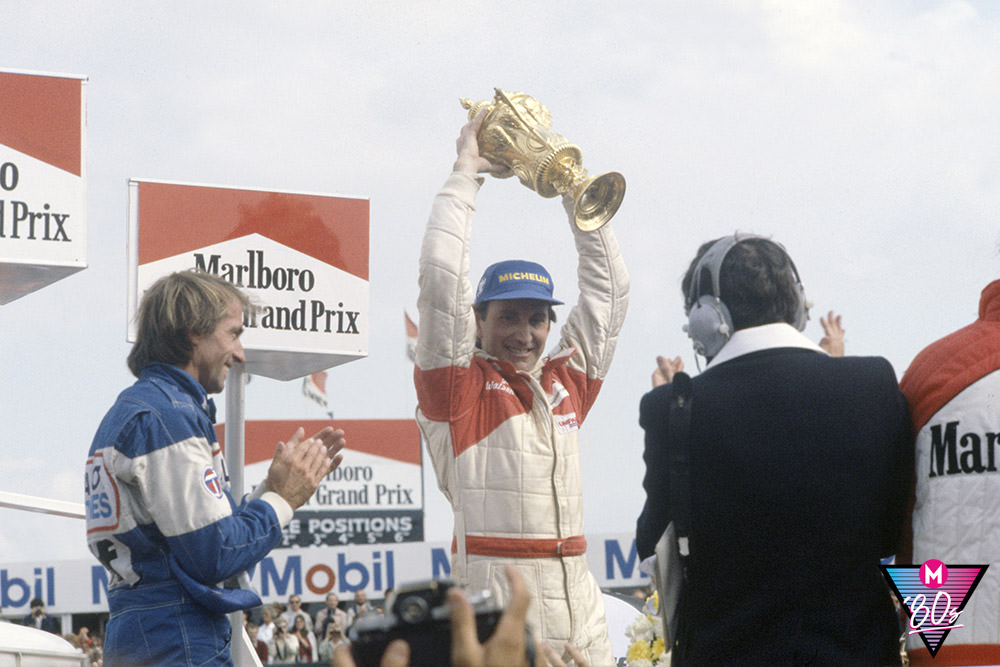 Were the stars aligned? No British driver had scored a Grand Prix victory since James Hunt signed off the 1977 season triumphantly in Japan – a significant drought for a nation accustomed to champions of such calibre as Clark, Surtees, Hill and Stewart, and previously in thrall to the exploits of Moss, Brooks and Hawthorn.

But during the build-up to the 1981 British Grand Prix, much was made of the sequential possibilities: John Watson had finished third and second in the two most recent races, Spain and France, so… Trouble was, he had a Cosworth-DFV in the back of John Barnard’s pioneering carbon-composite monocoque McLaren MP4/1 – and Silverstone was very much a power circuit, expected to suit the turbocharged brutality of Ferrari and Renault.

Me? I set off in the hope of seeing a decent contest, as one of three people in my mate Phil’s Mini. Rather than tracking our usual course from Cheshire to Silverstone, via M6 and M1, we abandoned the motorway network in Staffordshire and cut across country, navigating via the maps in the Campaign for Real Ale’s Good Beer Guide. Every time we reached a village stamped with CAMRA’s hallmark tankard, we’d stop so that two of us could sample local ales. We did eventually reach the circuit, but hadn’t bothered with anything as sophisticated as a tent. If it stayed dry we’d rely on sleeping bags beneath the stars; should it rain we’d have to make do with a three-berth Mini. Either way we’d be up early every morning, ready to join the rush for a decent vantage point when the gates opened at daft o’clock…

As it transpired, Watson would be fighting something of a solitary battle for the home crowd. There was never much prospect of two Brits making the field, Derek Warwick and Brian Henton being saddled with the uncooperative Toleman TG181. When Henton crashed his heavily at the chicane during practice, there were many who felt it was the kindest thing he could have done.

Nigel Mansell’s prospects took a dip after scrutineers gave the controversial, twin-chassis Lotus 88 the thumbs-up at scrutineering. He and team-mate Elio de Angelis practised the car, until the FIA stepped in and issued a red card. Lotus hurriedly cobbled together a couple of 87s and de Angelis qualified towards the back, but Mansell failed to make the cut. Home interest was thus reduced to a brace of drivers from the island of Ireland, Watson and Derek Daly.

René Arnoux made a slow-ish start from pole in his Renault, dropping to fourth behind team-mate Alain Prost and the Ferraris of Didier Pironi and Gilles Villeneuve, with Nelson Piquet, Alan Jones and Watson following.

Arnoux and Piquet soon worked ahead of the Ferraris – and on lap three Villeneuve spun at Woodcote. He collected Jones and forced Watson to brake fiercely. The Ulsterman avoided the carnage, but his team-mate Andrea de Cesaris, just behind, flew off the road and into the sleepers. “I came to an almost complete halt,” Watson says. “That cost me a couple of places and I was subsequently driving along without any real sense of what was about to happen. But Nelson Piquet crashed, I passed Carlos Reutemann and then the turbo cars ahead began to fail.”

He was second to Arnoux as the race entered its closing stages, but the leader had picked up a misfire and a home win suddenly looked possible. On the 60th of 68 laps, Watson swept past the spluttering Renault and the crowd went berserk.

“I was really aware of the fans’ reaction,” he says, “particularly on the Hangar Straight, where you have a bit of time to absorb your surroundings. I suddenly thought, ‘Hell, I’d better not make a mistake now’.”

Not only was this set to be the maiden F1 win for a carbon chassis, it was also McLaren’s first season under Ron Dennis’s management…

“Ron was leaning over the pit wall, hanging out ‘slow down’ boards,” Watson says. “I had a decent lead and he was anxious that I should conserve the car. Towards the end he was becoming more and more agitated. Other team members were more or less holding him by the ankles as he tried to lean farther across towards the track. I was actually doing as I was told – I had backed off by something like 1000rpm, but it didn’t seem to make much difference to my lap times.”

When he took the chequered flag to record the second victory of his F1 career, the crowd celebrations began in earnest. As Watson, runner-up Reutemann and third-placed Jacques Laffite completed their victory lap on the back of a flat-bed, fans swarmed across the track.

Watson: “I turned to Jacques and asked him what the hell was going on with the spectators. He said, ‘John, it’s their response to what you have just done for them.’ I was totally overwhelmed. Their reaction seemed completely spontaneous and part of the reason, I’m sure, is that they simply hadn’t expected a home victory. I felt extremely humble that everyone was making so much fuss just because I’d won a motor race.”

Afterwards, the roads around the circuit upheld gridlocked tradition so we headed down a country lane and turned to an old friend for advice.