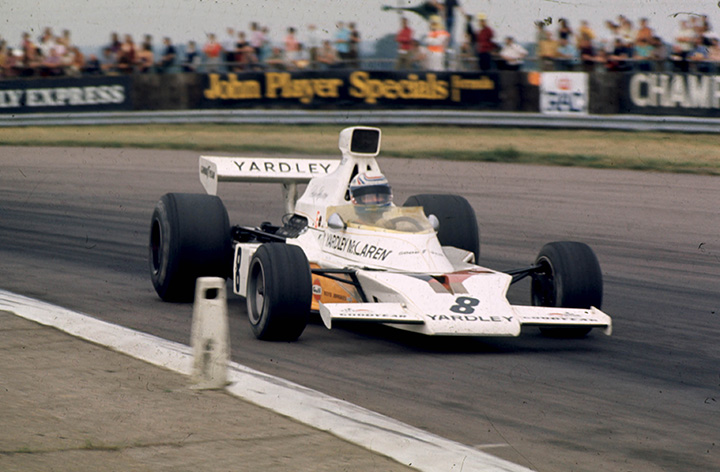 The monumental pile-up at the conclusion of the first lap overshadowed all else. True, it was a humdinger, eliminating in one fell swoop and a loop eight of the original 29 starters.

All three Surtees, a works Shadow, a BRM, a works March, the McLaren of perpetrator Jody Scheckter and the Brabham of its sole casualty: Andrea de Adamich, whose broken ankle counter-intuitively proved the wisdom of the new crash-resistant structures mandatory for every car.

The race, when finally it was restarted, was not without merit or incident, however. Jackie Stewart, who earlier had grabbed the lead from the second row with a typically mind-managed opening lap, suffered an out-of-character spin when attempting to again wrest the lead from the Lotus of the ever-spectacular Ronnie Peterson on lap seven.

A tricksy clutch caused the Scot to muff a downchange at Stowe Corner and he fishtailed into, through and out of the infield’s corn, clogging his radiators and damaging his nose-cone.

Peterson, adopting angles that took the breath away at this still chicane-less venue, held sway for a further 31 laps – until suave New Yorker Peter Revson, his smooth driving groomed on America’s ovals, eased his oh-so-stable McLaren, a design that owed a great deal to the team’s recent successes in Indycars, into the lead after a brief squall.

In contrast, newcomer James Hunt was elbowing his way towards the front – and into his country’s affections – aboard jolly Lord Hesketh’s privateer March. Third for a time, he set the race’s fastest lap, but ultimately the McLaren of Denny Hulme nudged him back to fourth.

This quartet was covered by fewer than four seconds at the finish. Crash? What crash? PF