What was the single most telling revelation behind yesterday’s unveiling of Aston Martin’s new AM-RB 001 hypercar, a car that if it proves to be as described, will rewrite the rulebook of road car capability as thorough in 2016 as did the McLaren F1 in 1994? It was not that it will have a kerbweight of 1000kg, or that every last one of them will have its very own bespoke single horsepower to give it motion. It was not that Aston Martin and its Red Bull partner has settled on a normally aspirated V12 engine to provide that power, nor even that the car’s design will essentially be the work of Adrian Newey. It was the setting. 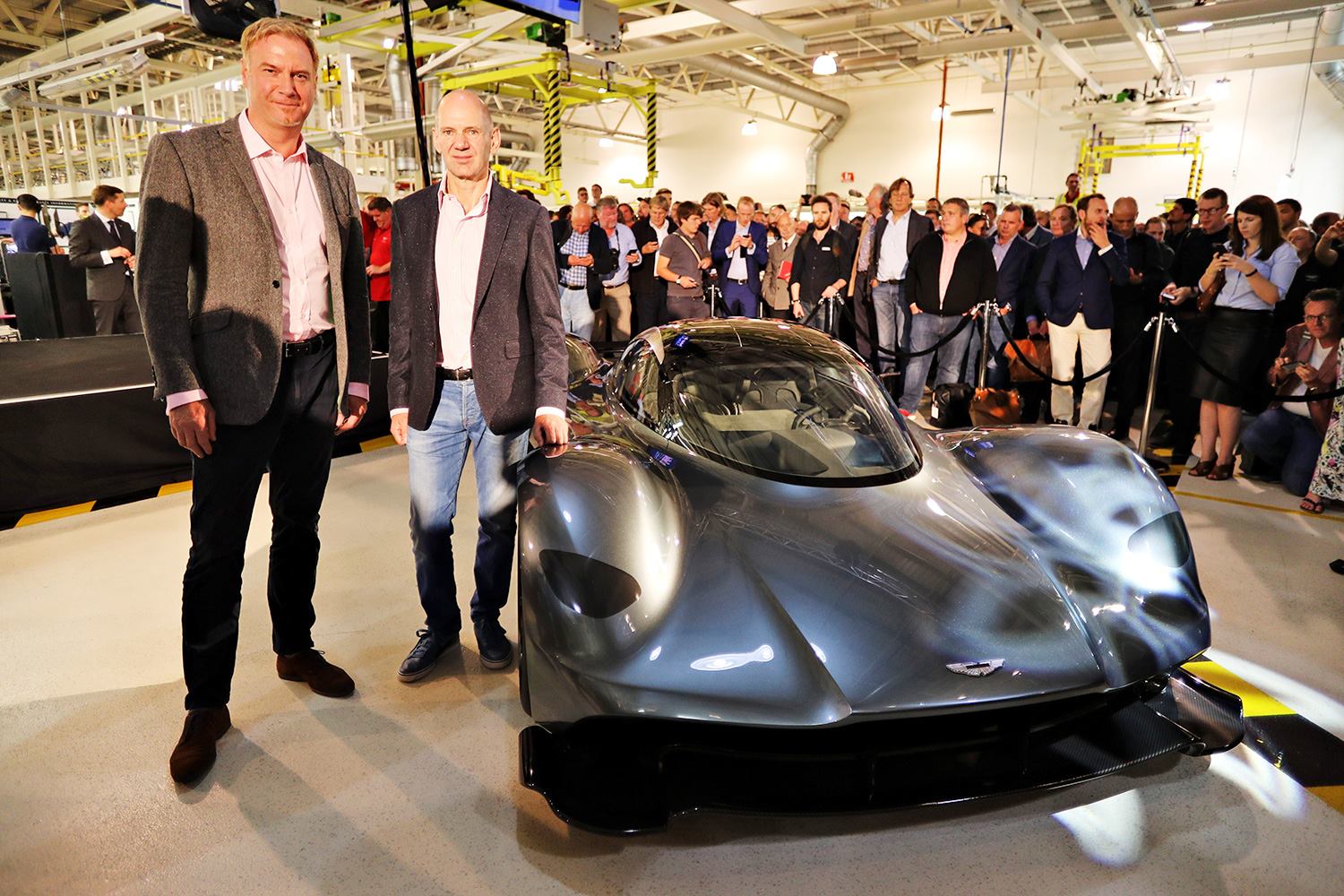 This was not the Monte Carlo Beach Club, nor Sunset Strip. We were not in Bahrain or Abu Dhabi. We were in the factory, at the end of the production line and the only invitees were a small number of hacks and a large number of Aston Martin employees. Every one of them in fact. There was no pointless scattering of rent-a-celeb D-listers. Daniel Ricciardo did turn up, in a Red Bull F1 car, but that was the closest to razzmatazz that this launch ever got. Otherwise we got Martin Brundle as compère, while on the stage were Newey, Christian Horner, Aston boss Andy Palmer, Aston design chief Marek Reichman and David King, the man in charge of making sure all Aston’s esoterica make it from concept to production. Proper people, in other words. There were no toasts, no champagne even, just sandwiches and water for the journos and a hog roast for the employees.

The significance of all this? Possibly none, but probably that by doing it in such a refreshingly straightforward style brought a sense of realism to a project that, on paper, seems barely believable.

Power to Weight 1000bhp per tonne

One thousand horsepower per tonne. What does that feel like with full traction in a low gear? Like a physical assault. I’ve driven a few DFV powered machines with that level of potency yet every time I do, the first time I put my foot down something makes me lift it straight back up again. I call it the instinct of survival. Although you do learn and even get used to it, at first that level of performance in a mere car seems inexplicable.

But those were Formula 1 cars. The Aston is a road car that seats two and will have at least enough luggage space for an overnight bag. Newey told me it would have sat nav, air conditioning and all the usual goodies required to make long distance travel not only possible, but desirable. Happily it will also have traction control and ABS, as it will need to if anyone other than superbly skilled and sensible drivers are to contain it within the highly compromised medium of the public road.

Of course we don’t yet know how big a departure this car represents and as no customer will get one until early 2019, we will be waiting a while to find out. But Newey believes it will have more downforce than any road car to date and, in pure power to weight terms, the step today is similar to that made by the McLaren F1 back in 1994. And, as we now know, that car made us completely re-evaluate our conception of road car performance. As someone who was around at the time and able to spend large chunks of time in the F1, the idea of now taking another commensurately vast step does seem unreal, fanciful even, were it not for the fact that the man behind it all would not have lasted long in F1 failing to deliver on his promises. In fact he is the most successful designer of top level racing cars there has ever been.

So the AM-RB 001 project is real, even if it doesn’t yet have its real name and the ‘car’ we were shown was actually a model. I can remember this stage in the F1’s gestation and the frustration of knowing it would not be months but years before we found out what it actually all meant not on paper, but the road. But I remember too that every minute of that wait was worth it and, from what little we have been shown so far, I’d bet it will be again.