After Hamilton’s win from pole at Round Four in Barcelona, the feeling was that Mercedes still had the quicker car. The street tracks of Monaco and Baku are considered anomalies, with Mercedes struggling for tyre temperature and grip at both, and all eyes are on the state of play at Paul Ricard, where Hamilton has led all but one racing lap since the circuit returned to the F1 calendar three years ago.

In Friday’s first practice session Valtteri Bottas was comfortably quickest, his team-mate and Verstappen three and four-tenths away respectively. “The front axle just doesn’t want to turn…” said a frustrated Max. Some set-up changes for the afternoon saw him quickest, just eight-thousandths clear of Bottas with Hamilton still scratching, a quarter of a second away. By Saturday morning, Verstappen’s margin was out to almost three-quarters of a second, although Red Bull team principal Christian Horner cautioned that Mercedes was not revealing its hand. He speculated that they had half a second in reserve.

Horner was bang on. When it all turned serious in the qualifying hour, Verstappen was still quickest, but by just a quarter of a second. And after trailing Bottas all weekend Hamilton, as he so often does, got a lap together to put No44 on the front row, which could prove crucial tomorrow. 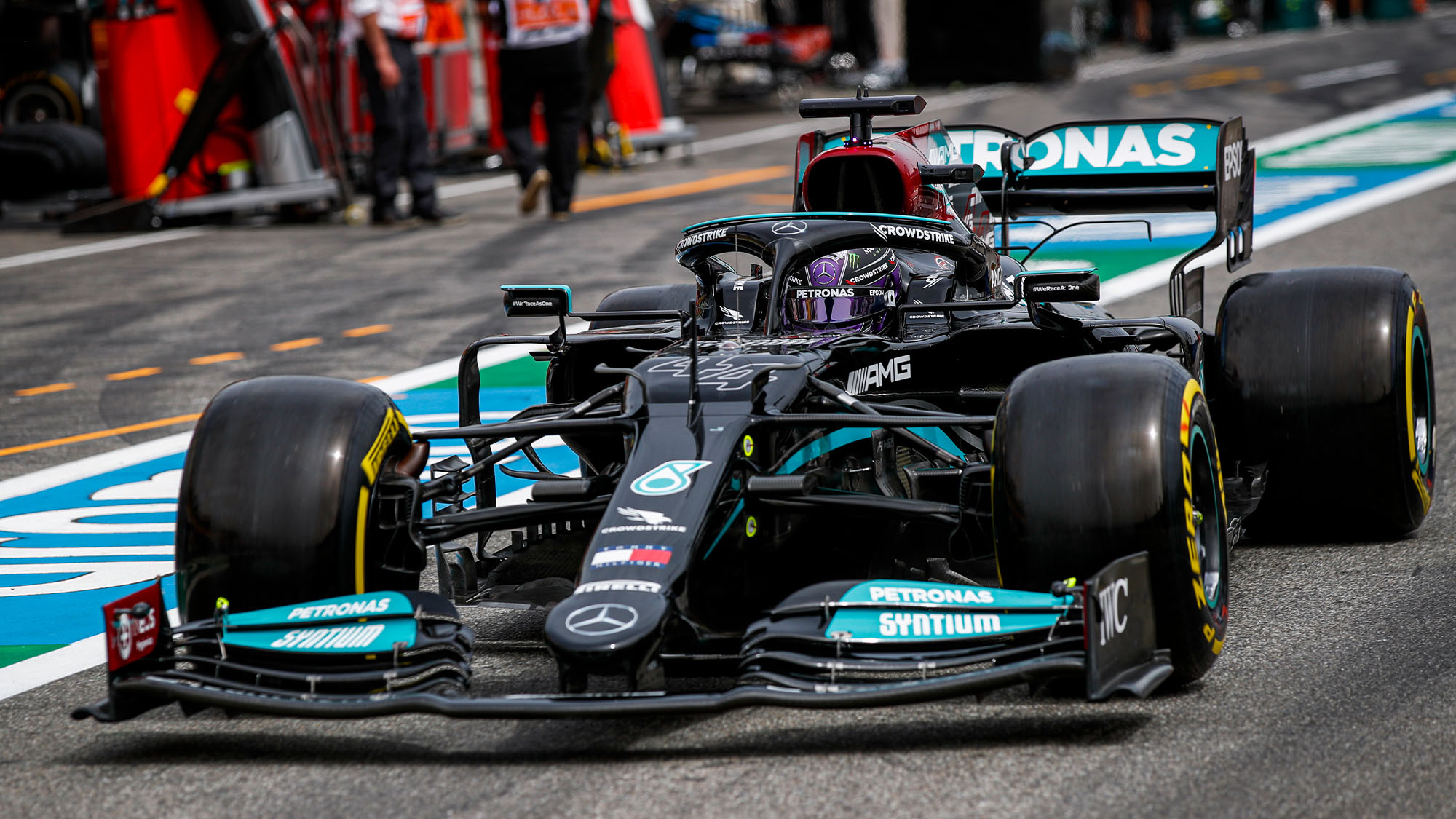 Lewis Hamilton lines up second in France for tomorrow’s race

Much had been spoken and written about a chassis change at Mercedes, with Bottas driving chassis No6, previously raced by Hamilton thus far this year, and Hamilton in chassis No4, hitherto raced by Lewis in 2020 and by Valtteri post-Imola this year. Why would you give your championship leader the car in which Bottas performed so poorly at Baku? But it’s worth pointing out that it’s also the same car in which Valtteri outperformed Lewis in Monaco.

“There’s no story,” confirmed Mercedes boss Toto Wolff. “It’s standard chassis rotation and not something requested by either driver. They were informed about it mid-week and there was no comment about it.”

“The pace is there and it’s going to be close with the Red Bull.”

Of course, as Hamilton appeared to struggle on Friday and Saturday the switch gathered traction as an ‘explanation’ until a smiling Hamilton knocked it down. “It’s been a really, really tricky weekend,” he explained. “You wouldn’t believe how many changes I’ve made to the car chasing my tail, but I was finally happy to prove the myth wrong – all our cars are the same.”

Bottas, who ultimately lines up third, 0.13sec behind his team-mate and 0.07sec ahead of Sergio Perez in the second Red Bull, was happier than might have been expected.

“My last Q3 run felt good and we’re having a strong weekend. The pace is there and it’s going to be close with the Red Bull.”

Part of Red Bull’s pace advance was achieved by backing off on the rear wing, giving greater straightline speed in sector two, without compromising too badly the tyre performance in the twistier final sector. Earlier in the weekend, drivers were finding it tough to make the soft compound Pirelli last long enough to give strong performance in S3. There was only a couple of tenths difference between the soft and medium and most front-runners were comfortably able to clear Q2 on the yellow-walled tyre.

With all four championship contenders in the top four places on the grid, the race could see an interesting strategic battle although there is also a chance of rain on race day.

Behind the top four, the stand-out performance came from Carlos Sainz. The Spaniard initially found the more nervous turn-in characteristics of the Ferrari tough in comparison to team-mate Charles Leclerc, but is now more comfortable in the car, as he was in Monaco and Baku before compromised qualifying sessions prevented him from showing the full potential of both car and driver.

This time though, he had the better of Leclerc from the start of the weekend. Perhaps it was assisted by his controlled steering inputs, especially in sector three, while the more aggressive Leclerc struggled with the front. It’s just the second time this season that Sainz has outqualified Leclerc, who got to within 0.14sec of Carlos on his final Q3 run to line up seventh.

Sainz has always been something of a Ricard specialist. He likes the atmosphere at a track which actually provided his passport to F1 when, in 2014, with Helmut Marko in attendance, he won both World Series by Renault races to all but secure him the title and a 2015 Toro Rosso seat. 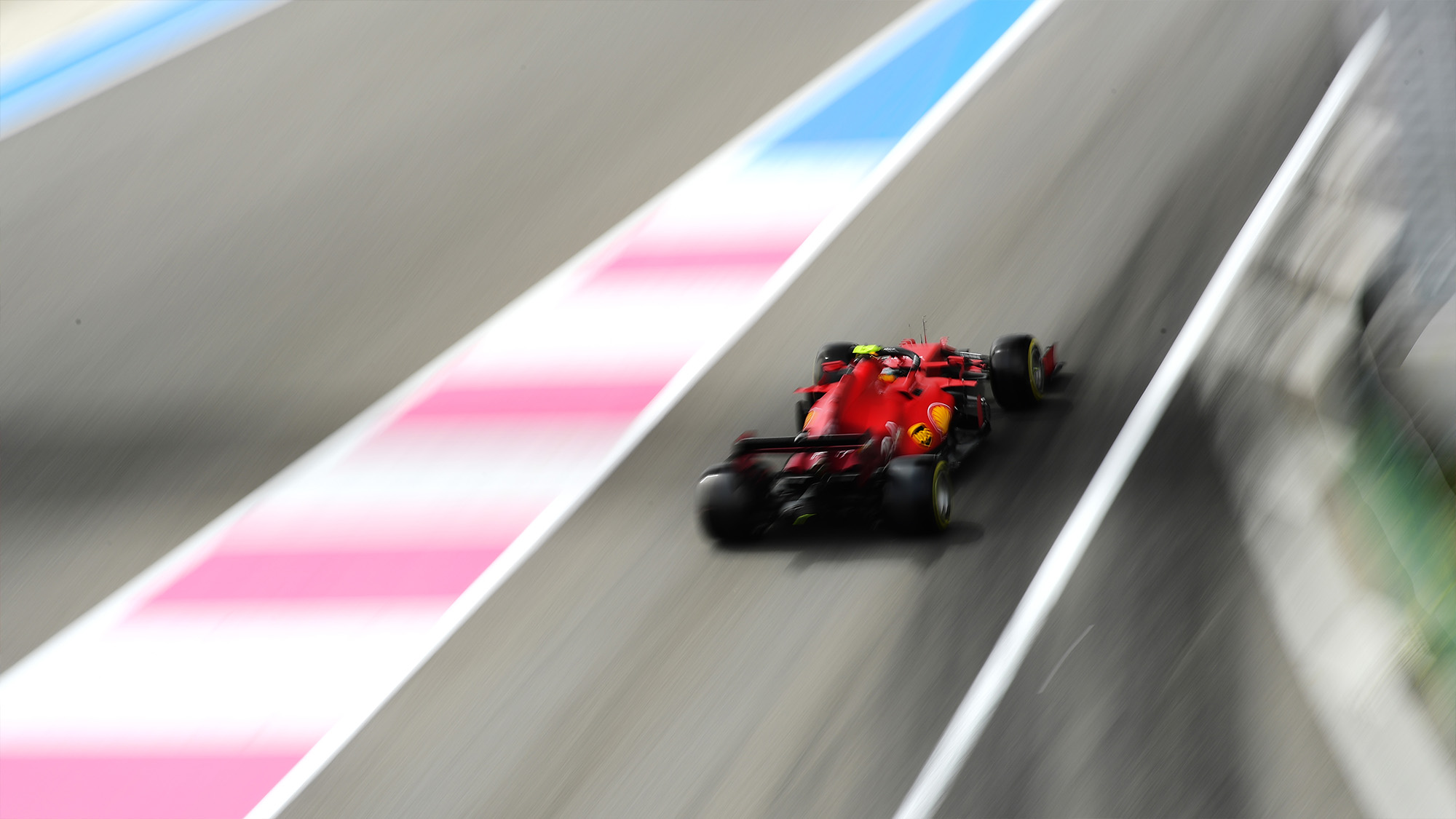 Paul Ricard a home from home for Sainz

The man he beat into second place in those races, Pierre Gasly, is the man who spilt the Ferraris on the grid when he qualified his Alpha Tauri in the top six for the fifth time in seven races.

“It’s a difficult track in terms of the tyre drop-off,” Gasly offered. “I wasn’t fully happy with the car in practice but made some changes for qualifying and it’s good for us to split the Ferraris and outqualify McLaren.”

Team-mate Yuki Tsunoda, by contrast, was back in the wars after qualifying eighth and finishing seventh in Baku. He dropped his car in the Mistral chicane, went backwards into the tyres and out in Q1 for the fourth time in seven races. Even discounting those mishaps, he has the biggest average qualifying deficit to a team-mate (0.52sec) on the grid — a surprise perhaps, given the pace shown in pre-season testing and the Bahrain season-opener.

Lando Norris maintained his 100% Q3 qualifying record in 2021 and starts eighth with the first McLaren, 0.13sec clear of team-mate Daniel Ricciardo as Fernando Alonso managed to split the papaya orange cars with the first Alpine.

There is increasing evidence that Alonso is getting more and more comfortable, outqualifying team-mate Esteban Ocon for the second successive race and now just 3-4 down in their personal qualifying head-to-head against the man who has just inked a three-year contract extension at the French team. 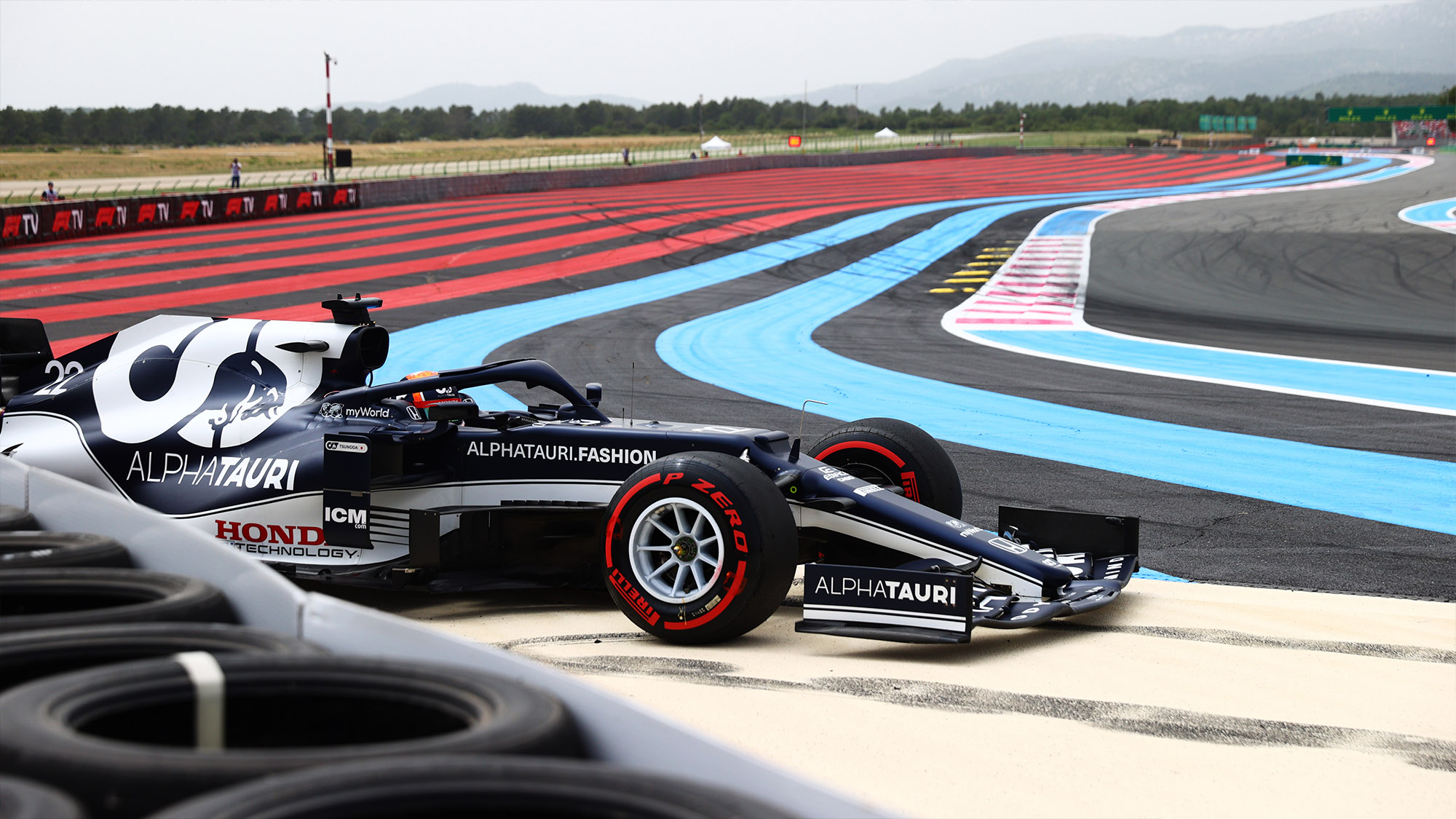 Ocon found the Alpine fantastic on the softs – he was a couple of hundredths quicker than Alonso in Q1 – but missed out by just over a tenth when he also tried to clear Q2 on the medium. Eleventh though, with freedom of tyre choice, is not the worst place to start tomorrow.

Mick Schumacher gave Haas its first Q2 qualification in 13 races, albeit through crashing at the end of Q1, bringing out the red flag and preventing the likes of Raikkonen and Latifi from challenging his time!

George Russell was another not to finish his Q1 lap – which was on course to be a good one – and so, after missing FP1 in favour of Roy Nissany, had just the one Q1 run to maintain his ‘Mr Saturday’ tag and extend his record of never being outqualified by a team-mate. It was close: he beat Latifi by just 0.002sec in Q1!

After the high-speed left-rear blow-outs that afflicted Lance Stroll and robbed Max Verstappen of 25 points in Baku, Pirelli conducted an analysis of both tyres. Its statement said: “The process established that there was no production or quality defect; nor was there any sign of fatigue or delamination. The causes of the two left-rear tyre failures on the Aston Martin and Red Bull cars have been clearly identified. In each case, this was down to a circumferential break on the inner sidewall, which can be related to the running conditions of the tyre, in spite of the prescribed starting parameters (minimum pressure and maximum blanket temperature) having been followed.”

The upshot is that minimum pressures have been raised by 2psi at Ricard this weekend, while an 18-page technical directive explained additional checks that will be made to ensure that teams comply.

We may not have a high-load kink followed by the long, long straight that we see at Baku, but Ricard does have the Mistral straight and flat-out Signes at the end of it, followed by a twisty section and the potential for increased tyre degradation, especially if higher-inflated tyres are subjected to track temperatures that can reach 50-plus degrees.

The forecast though, is for more of the cooler temperatures we saw today versus Friday, and possibly even rain. You get the feeling that Hamilton wouldn’t object to that, but then neither would Verstappen. Both are wet weather maestros. Expect another battle royal.

“We need to get back the 25 points we lost in Baku and I’m confident in my race car,” says Max. Perhaps it might be Lewis taking no prisoners at Turn One this time…