It took 28 seconds for Romain Grosjean to emerge from the flames of his wrecked Haas and leap clear with minor burns and no broken bones.

His car’s safety cell and Halo and protected him from serious injury during the 137mph impact, but it was far from a given that he would escape without being overcome by the heat and the smoke.

That he did may have something to do with the air filters in his helmet, which helped prevent toxic smoke from being drawn into the air he was breathing.

Despite being surrounded by the fire for the best part of half a minute, Grosjean suffered no ill-effects from the smoke, to the surprise of Dr Ian Roberts, the FIA’s F1 medical rescue co-ordinator, who led him away from the crash.

“I could see Romain trying to get up,” Roberts told Sky Sports F1. “I think I told him to sit down. He was obviously very shaky, and his visor was completely opaque, and in fact melted. I managed to get his helmet off to check everything else was OK.

“Our first thought was flames, smoke inhalation, airway issues, but in fact, nothing went up into his helmet – we’ve had a look at that as well.”

Designed primarily to protect against impact, modern helmets also incorporate features that will buy drivers time if they are caught in a fire and Grosjean’s Bell example is no exception.

“The [FIA] standard itself doesn’t call for very specific things,” Bell CEO Stephane Cohen told Motor Sport. “We have a few things that would help in case of the driver being engulfed in a fire or in vapours from a fire.

“We try to minimise the amount of gases or vapour that could go inside the helmet that would be inhaled by the driver, but it’s difficult to protect them from absolutely everything.” 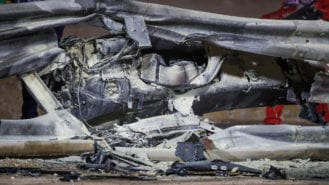 A ‘chin cover’ partially seals the base of the helmet, “which vastly reduces the amount of air or fumes going in from the bottom,” says Cohen.

This ensures that most air must enter via the ventilation ducts, designed with the knowledge that the helmet will mostly be moving at over 100mph when the visor is down. “The main ventilation channels are fitted with air filters which reduce the airflow, especially when the helmet is not moving. No airflow on the helmet means no air goes through the channels.”

With the visor in place, this means that there’s limited opportunity for smoke to enter, although it’s not a complete seal for obvious reasons. “We need ventilation, defogging or fog control, and that involves a little bit of air circulation inside the helmet,” says Cohen.

Regulations focus on impact protection but all FIA-accredited helmets for F1 have to provide enough protection from heat and flames to allow a driver to escape, with the fire test requiring components to withstand flames of almost 800C for up to 40 seconds.

“It was an enormous relief to see Romain Grosjean jumping out and over the armco barrier and getting out of this inferno,” says Cohen. “What is striking is the fact that he was able to get out of the car entirely by himself. This says a lot because the deceleration must have been huge but yet all of the systems worked well enough to mitigate the effect on the driver and he was fully conscious, he came out by himself, it’s amazing. Amazing.”

The crash also offers the potential to further improve safety. Cohen said that Bell will be gathering information from the crash that will inform future developments.