A new season opens with complaints that Formula 1 is less competitive, exciting and dramatic than in its golden years. The sentiment 30 years ago was much the same.

Entering the 1990 F1 season, McLaren-Honda dominated the landscape. Ferrari and fresh arrival Alain Prost was tipped to challenge though. Williams and Benetton could have their days too. But the rest could likely disregarded in terms of contention for the win.

And that included Tyrrell, the next team up in 1989’s constructors’ table. Yes, its 018 chassis was superb and a McLaren commercial tie-up relieved its perennial financial woe.

But, as Nigel Roebuck outlined in advance, “only luck will win Tyrrell a race in 1990, for the days are long gone when you fight the major manufacturers with a Cosworth engine”.

Yet Tyrrell twice challenged for race wins in 1990, relying on none of the luck Roebuck anticipated. It put on a very respectable showing in the year’s opening round, the US Grand Prix in Phoenix, Arizona.

Tyrrell, for one thing, had the driver. Jean Alesi made his F1 bow with the team at the preceding season’s French Grand Prix where he stunned by finishing fourth having run second. Plenty were suggesting that F1 now had its post-Ayrton Senna standard bearer.

Tyrrell likely had the tyres too, for Phoenix at least as, literally days prior to the season-opener, it joined the motley band running Pirellis rather than mainstream Goodyears.

Pirelli the previous year had produced strong qualifiers, often elevating Brabhams, Minardis and the like on the starting grid before falling away in the race. And the perceptive recalled that the Italian supplier got its sums bang on in Phoenix, helping Alex Caffi’s Dallara run second for a time. 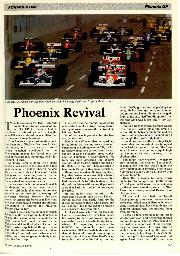 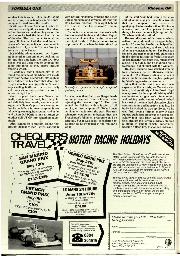 Thank goodness for Jean Alesi and Pirelli. Thanks to that combination, the US GP in Phoenix had a modicum of interest for half its length, even if it was an…

Phoenix though was an incongruous place for fireworks. Its uninspiring downtown street track, visited for the first time the previous year, was just the latest of F1’s faltering attempts to make it in America.

Its move for 1990 from an achingly-hot June slot to March and having longer to promote the race did little to increase limited local enthusiasm. A nearby llama race the same weekend elicited greater interest apparently.

But fireworks we got. Another Pirelli tour de force, combined with the second of the two Phoenix qualifying sessions being rained on, added up to a starting grid with good claim as F1’s wackiest ever.

Gerhard Berger bagging pole on his McLaren debut wasn’t outlandish, but what followed was. Pierluigi Martini’s Minardi was next, with a best just two-thirds of a tenth from top spot. Then it was Andrea de Cesaris’s Dallara, and Alesi’s Tyrrell. Only then did we have the haughty Senna, who’d struggled with his Honda engine.

The Ferraris were both hampered by gearchange problems, seventh with Prost and 17th with Nigel Mansell. The Williams lined up ninth and 12t; the Benettons sixth and 22nd. And Olivier Grouillard was eighth. In an Osella. Pirelli-shod, obviously. 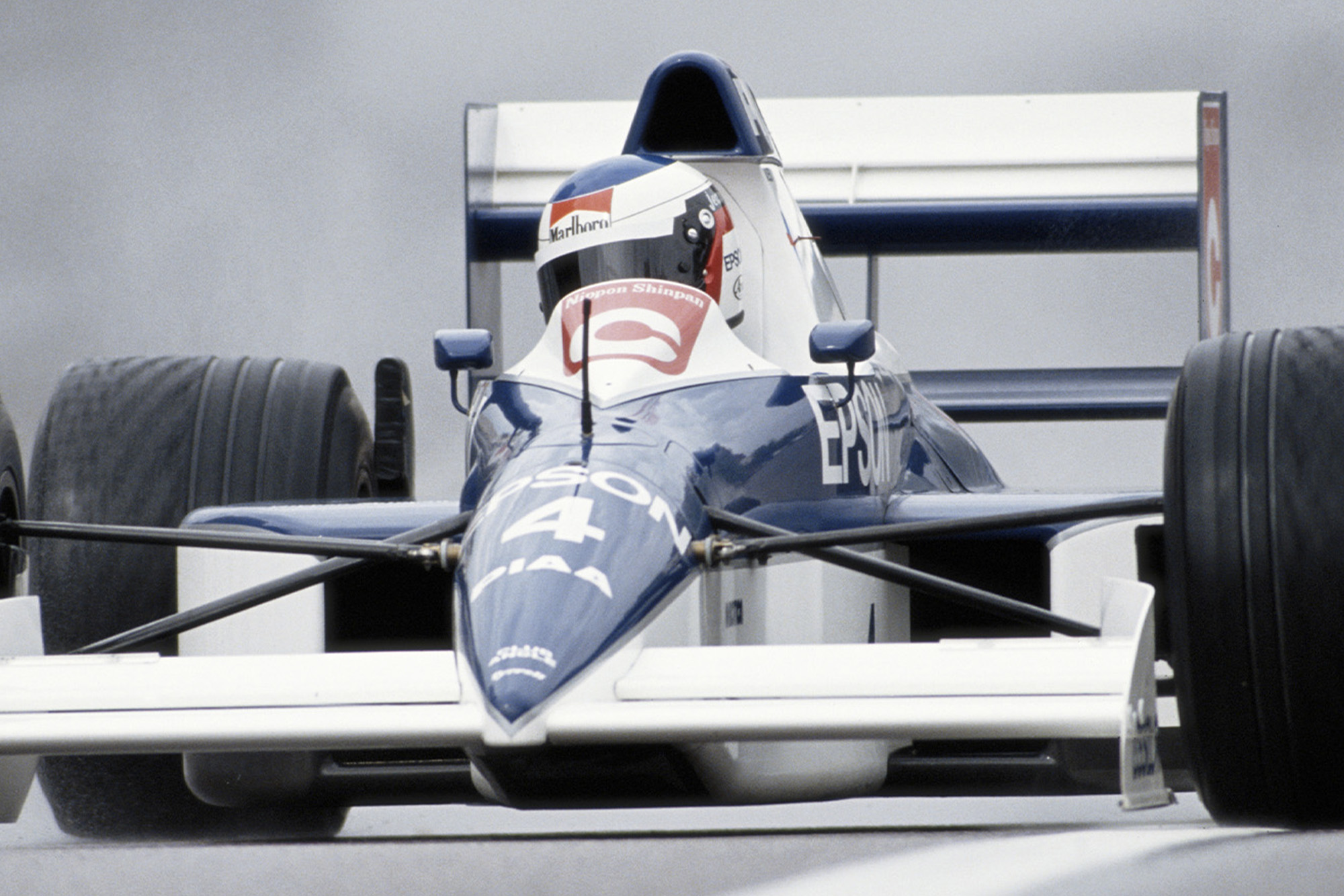 Alesi though was disappointed even with his high-up slot – a consequence of the team’s late tyre supplier switch.

“I didn’t qualify well because of my inexperience – I touched the wall twice – so I was not precise,” Alesi told Motor Sport. “But I was quite confident for the race.”

Quite. He needed only until the first corner to thrust his Tyrrell down the inside of Berger’s McLaren to lead. “My thought was, ‘I hope my friends in Avignon are watching the race!,’” Alesi recalled.

“It was the moment in which Jean truly won his F1 spurs. You just don’t do that to Senna!”

And this was no opportunist and fleeting glory run, as Alesi then scampered clear at an astonishing rate. He was 2.4sec clear after one lap, and his advantage grew each time by. Underlining as much, he set what would be his fastest lap that day, and the fourth fastest overall, on lap four.

On that same lap Senna moved past De Cesaris into third and had only team-mate Berger between him and the upstart leader. But already he was 6.5sec off Alesi and the gap continued to increase. Senna though was displaying none of the impetuosity that characterised his previous year.

On lap nine Berger tank-slapped into a tyre barrier, after snagging the throttle under braking, which gave Senna a clear run at Alesi.

“You might have expected the gap to start shrinking the moment Senna took second place,” David Tremayne noted for Motor Sport, “but that wasn’t quite the way it happened in Phoenix. True, it was 8.3sec on lap 10, and 7.8sec on 11, but by 14 it was out to 9.41sec!

“Thereafter it began to come down again, to 6.4sec on lap 17 and 2.88sec on lap 22, but you could sense Senna weighing up the unusual situation, rather as Mike Tyson must have pondered Buster Douglas’ punches.”

Alesi knew the score. “Suddenly I started to see some red coming in the mirrors,” he noted, “and I understood it was Ayrton, because I had the pitboard.” Even Alesi’s boss Ken Tyrrell accepted there and then on live TV that Alesi would have no means to resist.

“Then he caught me,” Alesi continued, “and I thought ‘let’s give him a hard time’. I was not weaving, but I was pushing to make it difficult to overtake. I had such a good time…”

Again, quite. Senna out-braked Alesi on the inside at the end of one of Phoenix’s long straights, and with most drivers that would have been the end of the matter. But Alesi wasn’t most drivers.

“As Senna headed for turn two on a slightly awkward line,” Tremayne observed, “Jean had no hesitation in slamming round the outside so he had the inner line for the left-hander.

“The two came to a virtual standstill, but he had the lead back to cheers of admiration. It was the moment in which Jean truly won his F1 spurs. You just don’t do that to Senna!”

A lap later they reconvened and Senna again ducked by Alesi on the inside. Once bitten, Senna this time covered the line for the following turn two, but Alesi kept coming, leaping out from behind to get wheel-to-wheel into turn three!

Only at the fourth turn, a tight right-hander where Senna had the inside, was Alesi finally batted away.

Senna enjoyed the fight. “I certainly didn’t expect him to go round the outside of me when I got inside him!,” he enthused. “It was a very exciting battle and he drove really well; very clean and precise, the sort of motor racing I like.”

With half the race remaining that was largely that as Senna cruised to victory. Alesi though bagged a clear second place, despite a blistered tyre, finishing within 10sec of Senna and 45sec ahead of third.

“We know Alesi is good. But in Phoenix he was able to demonstrate how good,” concluded Tremayne. “Few would argue with Senna’s post-race contention that he could be a future champion.”

It didn’t work out that way. Alesi’s newfound celebrity created a tug of love between Ferrari and Williams for 1991. At the time it looked a toss-up, but it proved the starkest of sliding-doors moments, as the Scuderia entered a desperate period of doldrums while Williams reached for the stars. Alesi ended up at the Scuderia.

A single F1 race victory was the meagre total reward for this prodigious talent.