Fernando Alonso of Ferrari and Sebastian Vettel of Red Bull had a frustrating 2010 prior to the Singapore Grand Prix. But at the season’s toughest challenge, they elevated to another level 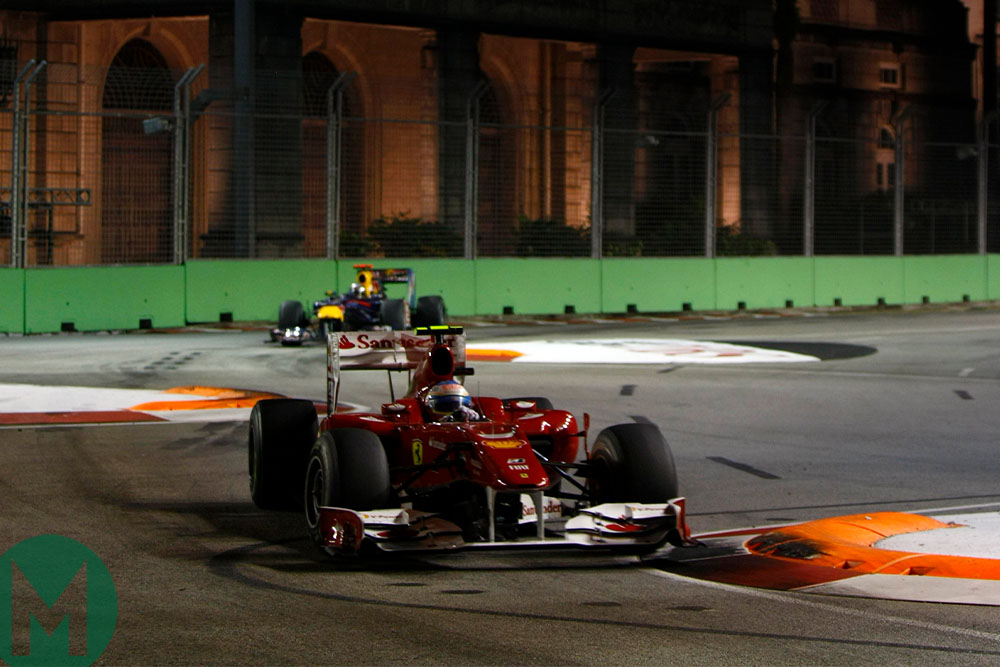 There are different types of classic motor race. There is of course the thrill-a-minute madcap sort, which provides plenty for the highlight reels.

But there is another sort. Not as bountiful for social media snippets, but just as captivating. The intense race. Where drivers and cars are taken to the very maximum in a desperate and extended chase. Wherein the most minor teeter would decide the winner definitively.

The Singapore Grand Prix of 2010 was a classic of the genre. Its protagonists: Ferrari’s Fernando Alonso and Red Bull’s Sebastian Vettel.

In something alien to 2019 perspectives, five different drivers could have left that Singapore race on top of the drivers’ table. Alonso and Vettel were among them but had been struggling relatively. They were habitually at the front in 2010 but had been patchy in converting their performance to points, thanks to bad luck and driving errors.

Yet, as the season reached its business end, both were coming to form at the right time. They rammed the point home in Singapore.

Alonso’s chances, however, were nearly choked at source. At the Marina Bay street track, where passing probability ranks near Monaco’s, qualifying is vital. And Ferrari was in trouble.

Felipe Massa stopped before completing a lap, then team-mate Alonso had problems too, with a strange throttle response. Only a complete map change for Q3 righted things, and he took a fine pole. 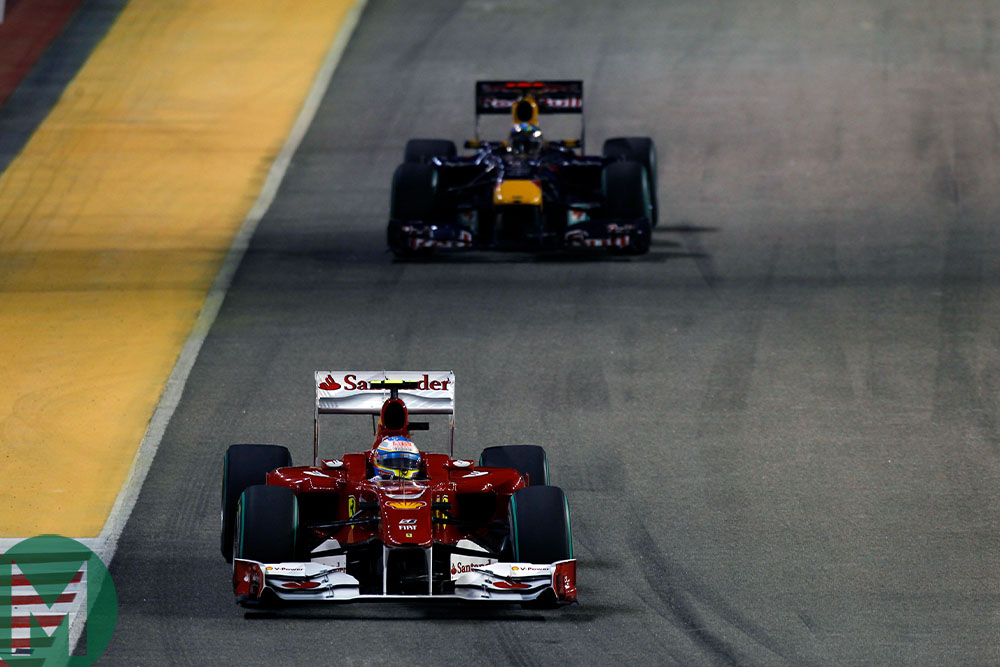 The Ferrari driver would maintain his lead over Vettel under intense pressure Photo: Motorsport Images

Alonso called it a “gift – the Easter surprise”, and not just because of the technical hurdles. He would likely have qualified second had Vettel – who’d dominated practice – not scraped a wall on his second Q3 run. Vettel had to make do with the runner-up spot.

And had Vettel got pole or indeed led from the start – an Alonso chop put paid to the latter – likely there wouldn’t have been much of a race. But Vettel didn’t, and a fine race there was.

The pattern didn’t waver, Alonso leading and Vettel right behind. Both proceeding at 100 per cent. At least.

Cars dancing on the edge. Dodging backmarkers and walls. Leaving the rest – haughty names among them – a speck in the rear-view. The acrobatic layout and scant room for error over two hours in intense humidity, which made Singapore the year’s biggest challenge, seemed mere details shrugged off.

It left the matter of how Vettel was to get ahead. As noted, overtaking at Singapore is largely theoretical; this also predated DRS and gumball Pirelli tyres.

The undercut was headed off by the duo pitting on the same lap in a one-stop race; both deterred from stopping sooner as they’d have dropped behind Lewis Hamilton’s McLaren. Vettel also had a jerky exit from his pitbox.

That left one avenue. “I was pushing Fernando as hard as I could, and hoped he might clip one of the walls or something,” explained Vettel.

Vettel though did not relent, indeed looked more potent on harder tyres in stint two. The pair circulated together as if in a speeded-up film, but there was no overtake for Vettel, nor the slightest hint of a chance of one offered by leader Alonso.

Alonso was not only unflinching but also utterly calm and calculating, managing his car’s positioning – to Vettel and the backmarkers – and everything else, to perfection. “It was difficult at the end,” Alonso added on this subject, “because there was a group of cars ahead and I had to manage the gap to them without running the risk of overtaking under yellow flags, or anything like that.”

Two hours on, they ended how they started, and how they’d been for the interim. Alonso took the chequered flag with Vettel just under three-tenths shy. His was a rare grand chelem too.

It was the sort of metronomic display we associate with Alonso at his formidable best. Intense, relentless and without a hint of wavering. The victory was a lot like him.

And if our eyes told us this was a game for two players, the stopwatch really brought it home. 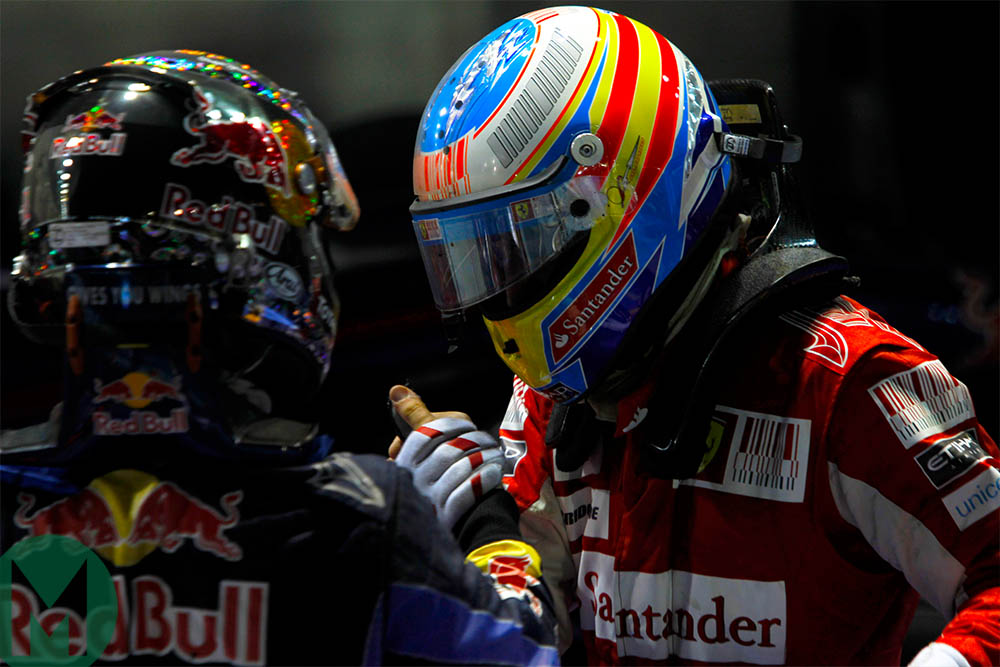 While Alonso came out on top in Singapore, it would be Vettel who would win the 2010 title Photo: Motorsport Images

Mark Webber finished third, some 29sec shy, and this was with a mid-race safety car. Webber’s right-front tyre was in a bad way after contact with Hamilton which put the latter out but still, it was an amazing margin.

Even that was just the start of it. Alonso and Vettel between them set 35 of the 36 fastest laps in the race. Aptly, these 35 laps were shared as equitably as is possible: Alonso with 17 of them and Vettel 18.

The rogue non-Alonso/Vettel lap of the 36 was set by Renault’s Robert Kubica, who made a late tyre change due to a puncture. Even so, his fastest tour was over a second shy of Alonso’s and Vettel’s. The best like-for-like lap set by the rest was 1.7sec slower than Alonso’s ultimate.

It has echoes of the modern-day ‘Class A’ – except with only two drivers. Appropriately they topped that year’s drivers’ table in the end, the title settled in Vettel’s favour amid Vitaly Petrov and Ferrari’s early pitstop in the Abu Dhabi season-closer.