Charles Leclerc was in a class of one on Sunday during the race but there was a window in which his closest challenger in Max Verstappen got close.

Leclerc’s lead was at a comfortable three seconds before Red Bull triggered an undercut. Ferrari responded immediately but had to see off a three-lap attack by Verstappen between laps 17 and 19 after coming out less than a second ahead.

The first attempt was unsuccessful and a subsequent stop didn’t work in Red Bull’s favour either, much to the annoyance of Verstappen. He voiced his anger towards the team loud and clear over team radio: “That’s two times that I take it easy on the out-lap that I could’ve been in front. I’m never doing that again.”

Was Verstappen right to be angry for not being allowed to push or did it give him the chance to fight for a lead that was otherwise out of grasp?

By analysing the race pace of the respective teams and drivers at the top we can assess whether, as Verstappen claimed, the Dutchman could have arrested the lead of the race away from Leclerc.

We can also look at the relative performances of the top teams in race one of the season and judge where rivals were lacking during the 2022 Bahrain Grand Prix. 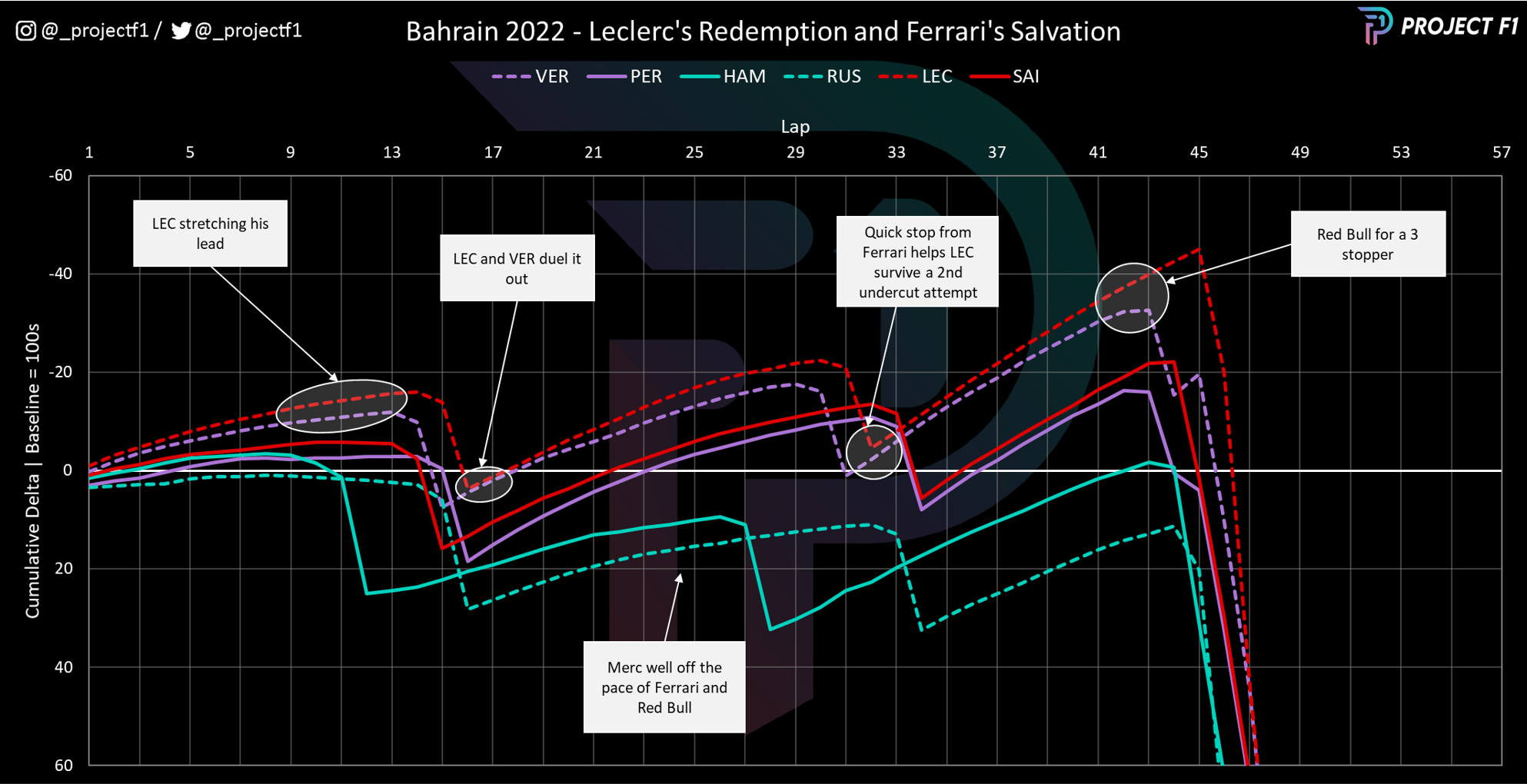 With Leclerc in P1, Verstappen in P2, Carlos Sainz in P3 and Sergio Perez in P4; it was set to be a showdown between Ferrari and Red Bull. The first stint highlighted how Leclerc and Verstappen were in a league of their own. Ferrari’s call to put Leclerc on fresh softs was an astute one as the extra grip helped the Monégasque control the pace from the front at the start versus Verstappen’s used tyres.

Sainz and Perez were very similar for pace for most of the race. Perez losing position to Lewis Hamilton early in the race was costly in his push for P3 against Sainz. George Russell’s mistake in qualifying resulted in a compromised start of the race, having to manage a longer stint and nurse the tyres.

Mercedes was far off the pace of the front runners, with the middle stint on the hard tyre being particularly woeful. Things were better in the third stint but still not fantastic.

Undercuts were powerful for Red Bull; having almost clinched the overtake in both occasions – though the second one was more of a long shot. Despite Verstappen’s comments on the radio, he had gone purple in the Sector 2 of his outlap and his Sector 3 trailed his best sector time by about five-thousandths of a second – appearing to not have much excess pace in reserve. Ferrari did well to have a faster pitstop than Red Bull on this occasion too.

Brake temperatures and other issues reared their heads towards the end of Red Bull’s stints as the pace would start to plateau. 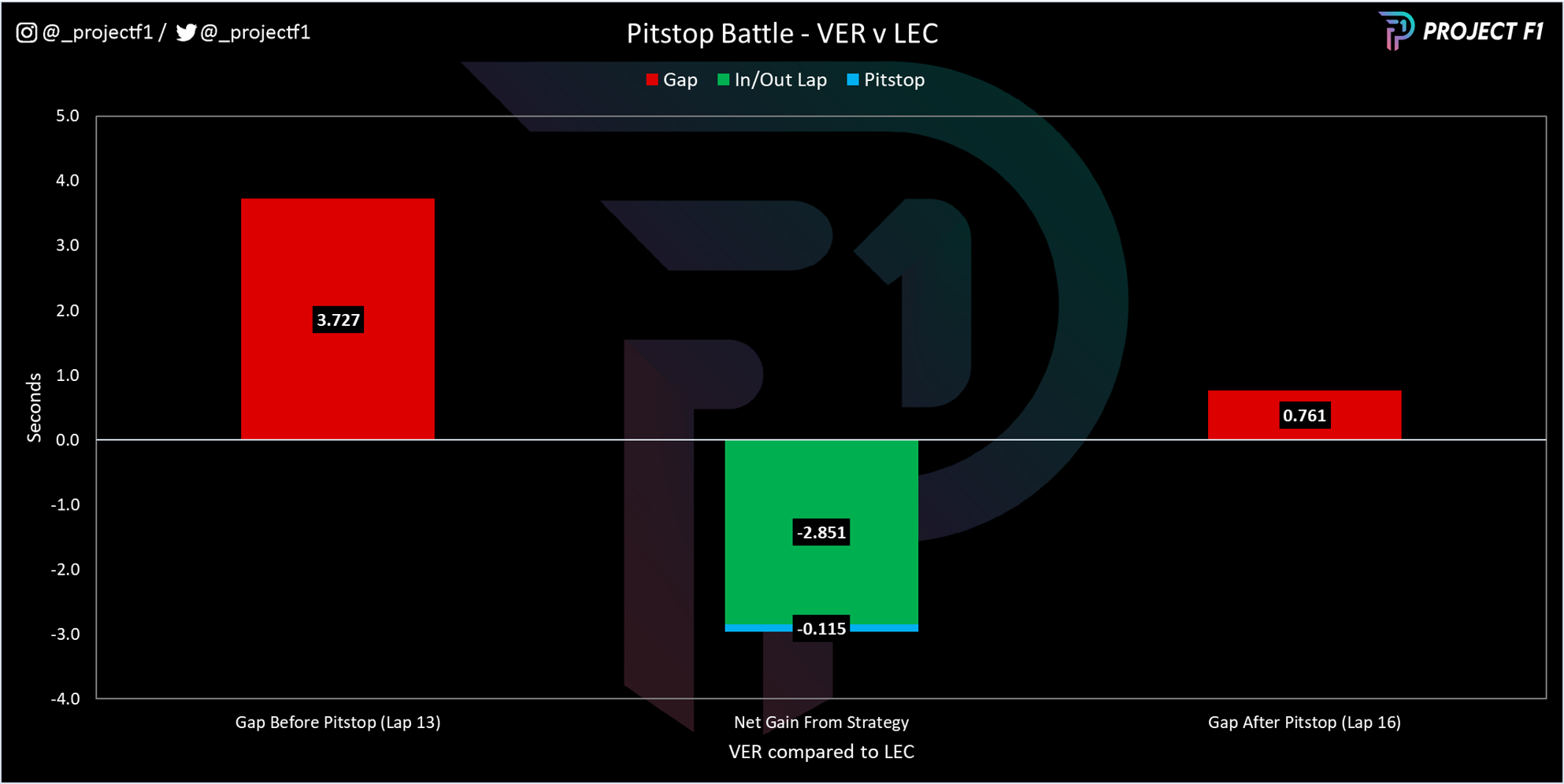 By the time of the first pit stops, Leclerc’s lead was up to almost to 4sec, just beyond the usual ideal window for an attempted undercut.

Yet even with the tyre warm up problems that faced Hamilton on the hard compound, Red Bull pulled the trigger and almost effected the perfect strategy. With Red Bull instead opting for another set of softs, the effect of the undercut was huge here, with Verstappen taking three full seconds out of Leclerc’s lead, shown by the green bar above.” 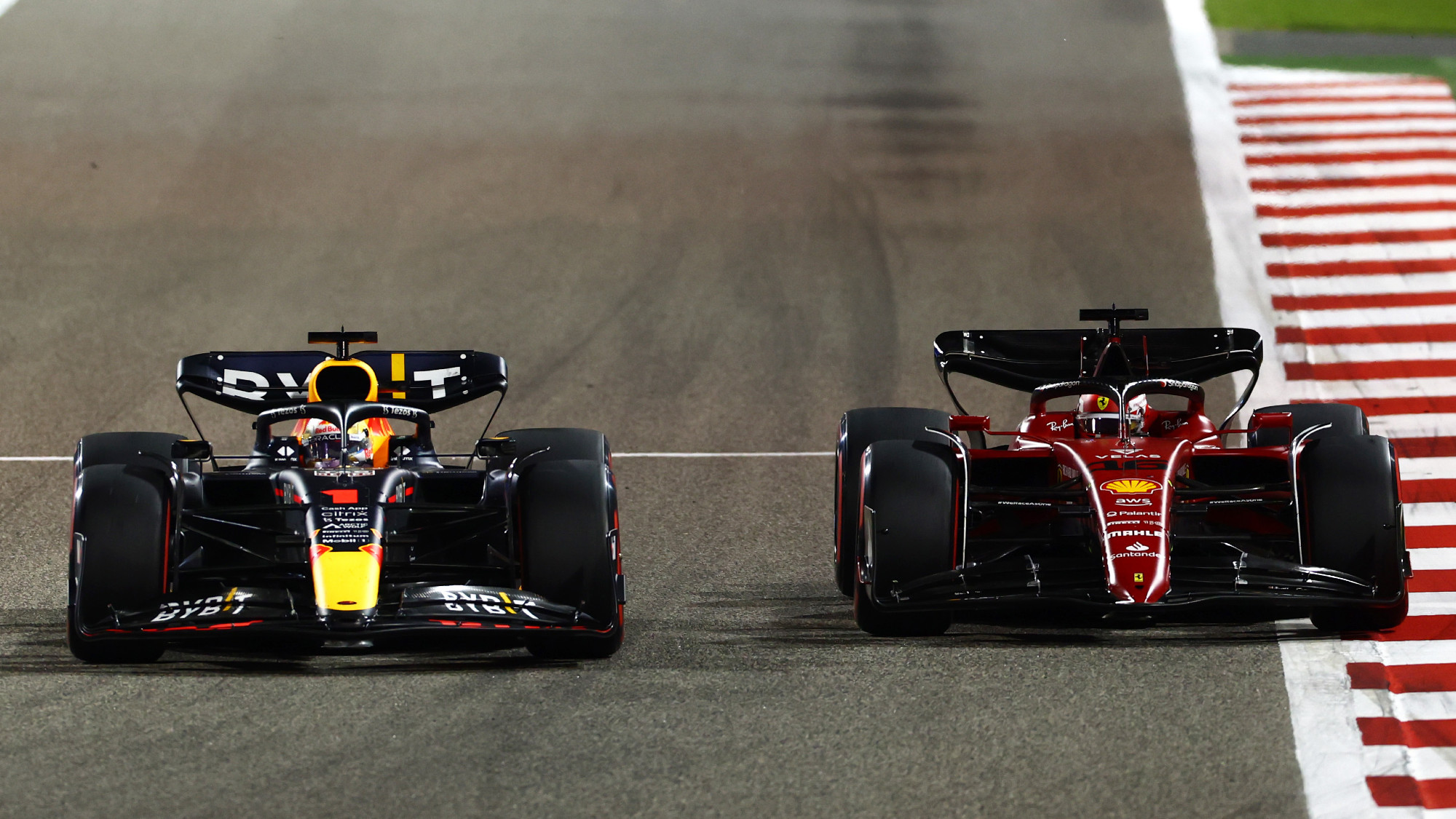 Red Bull’s strategy put Verstappen within DRS range that then allowed for the exciting on track battle that went three laps long. With Verstappen attempting huge dives down the inside of Turn 1, it left the Red Bull deep and off line for Turns 2 and 3, allowing Leclerc to position for a switchback up the hill.

Leclerc said he strategically conceded the place each lap, aiming to get the DRS for the run down to T4, a defensive move that worked every time.

By the last of the three attempts made by Verstappen, his brake and tyre temperatures far exceeded the ideal operating window, forcing him to back off and get them back under control which, in turn, allowed Leclerc to escape up the road. 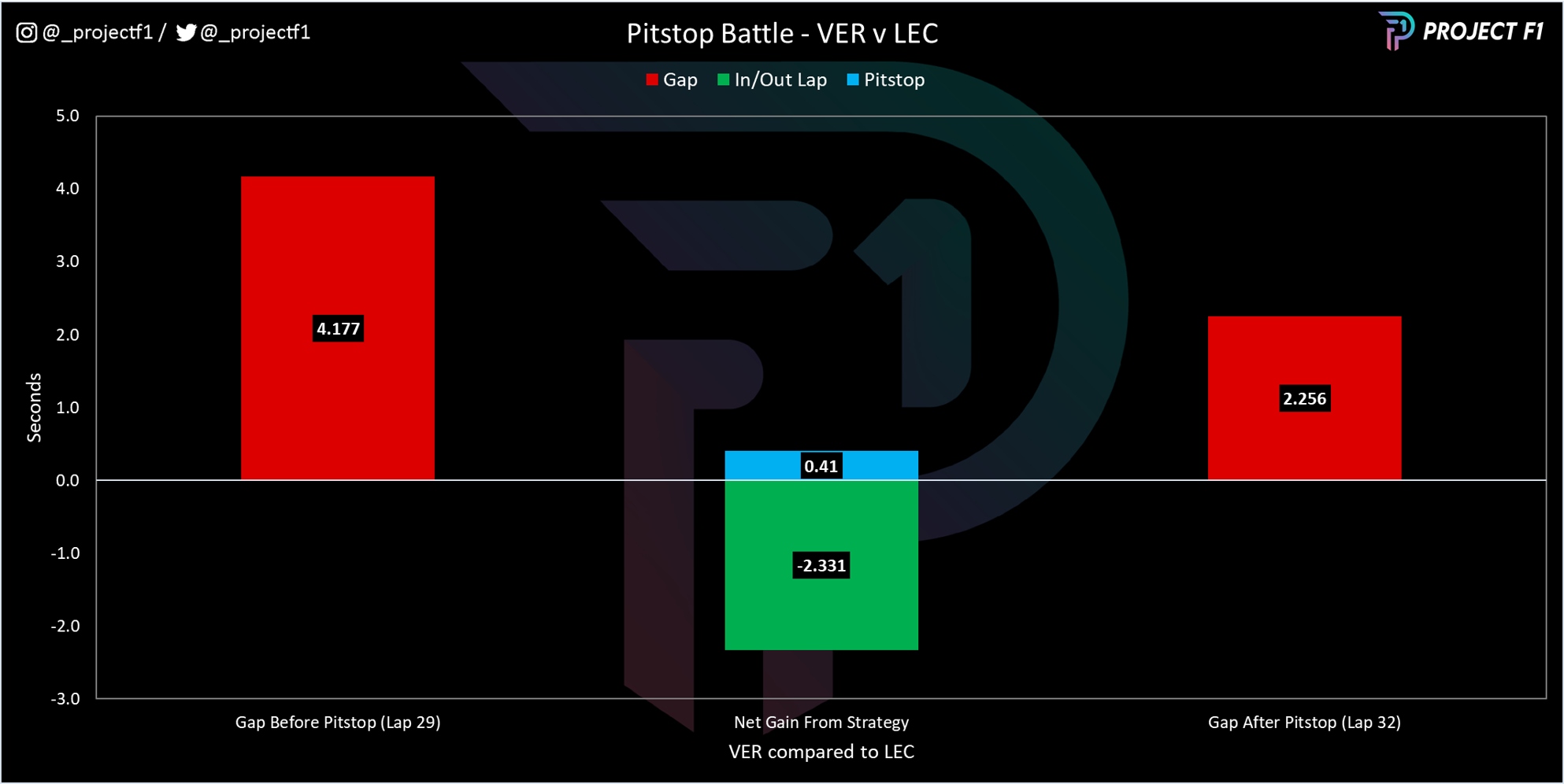 Verstappen’s next undercut attempt was another powerful one, albeit not as good as the first attempt. Why?

Firstly, as shown by the red bar on the left, Leclerc had a bigger gap in hand this time which gave the Ferrari pit crew a bit more margin for error. Secondly, the Ferrari pit crew were able to help give Leclerc another four-tenths margin thanks to a speedy stop in comparison to Red Bull’s for Verstappen. Finally, Leclerc’s in/outlaps were good enough to not give Verstappen too much ground despite the tyre advantage belonging to the challenger.

Though Verstappen thought his outlaps were slow, the timing sheets say that he wasn’t dawdling as much as he thinks. 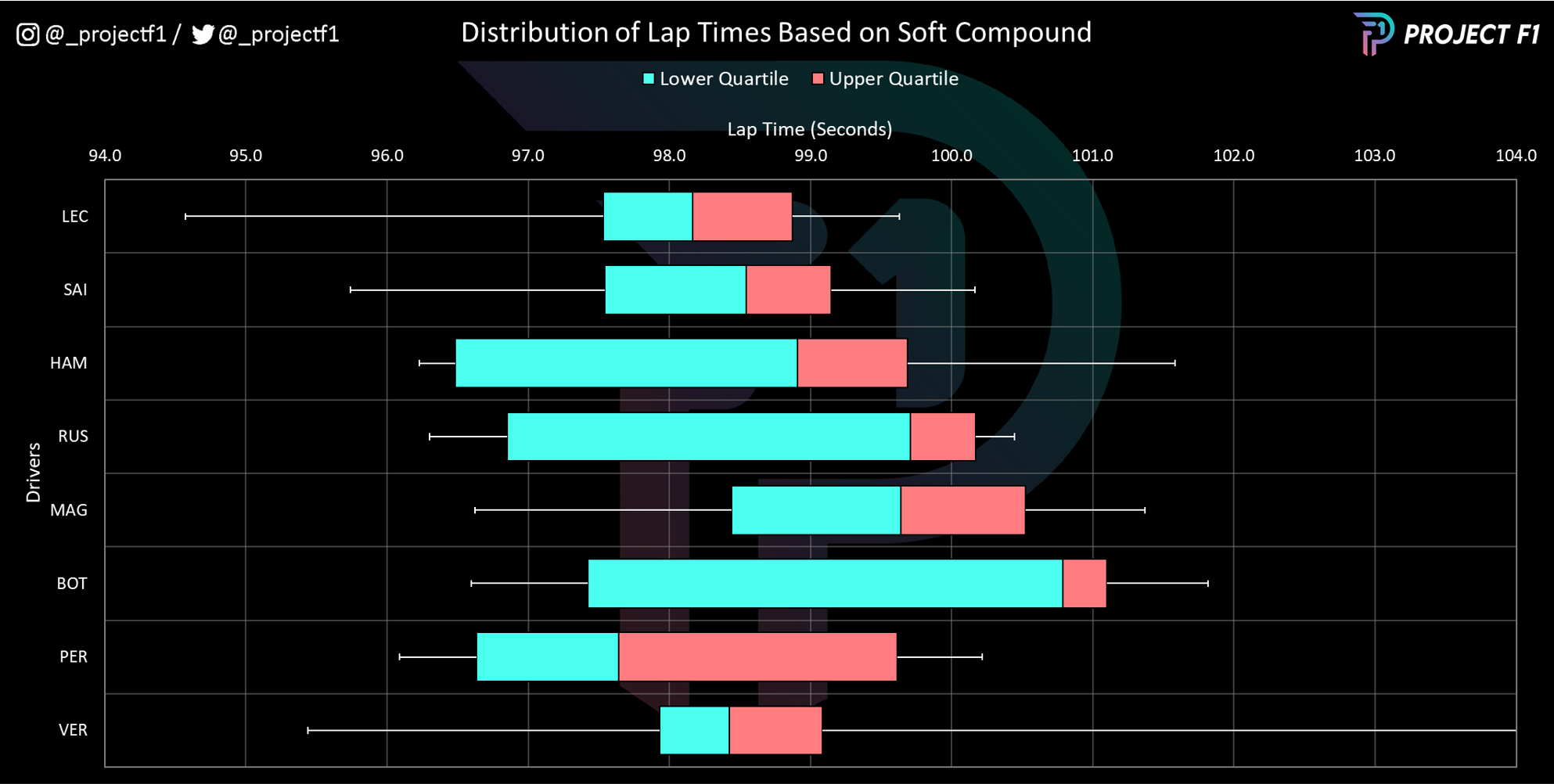 Overall, Leclerc had the better pace, across all stints compared to Verstappen. Verstappen’s first hard outlap was definitely an outlier: he’s the only non-Ferrari driver whose range of laptimes (shown by the white line) extends below 96sec.

But the pain of that can be seen in the laps that follow, with most tightly clustered between 98 and 99sec. Verstappen’s pace started to fall away in the third stint. Hindsight would tell us that this is due to growing car issues.

Even if he didn’t face terminal issues, the Dutchman was also unlucky to pit the lap before the safety car also. 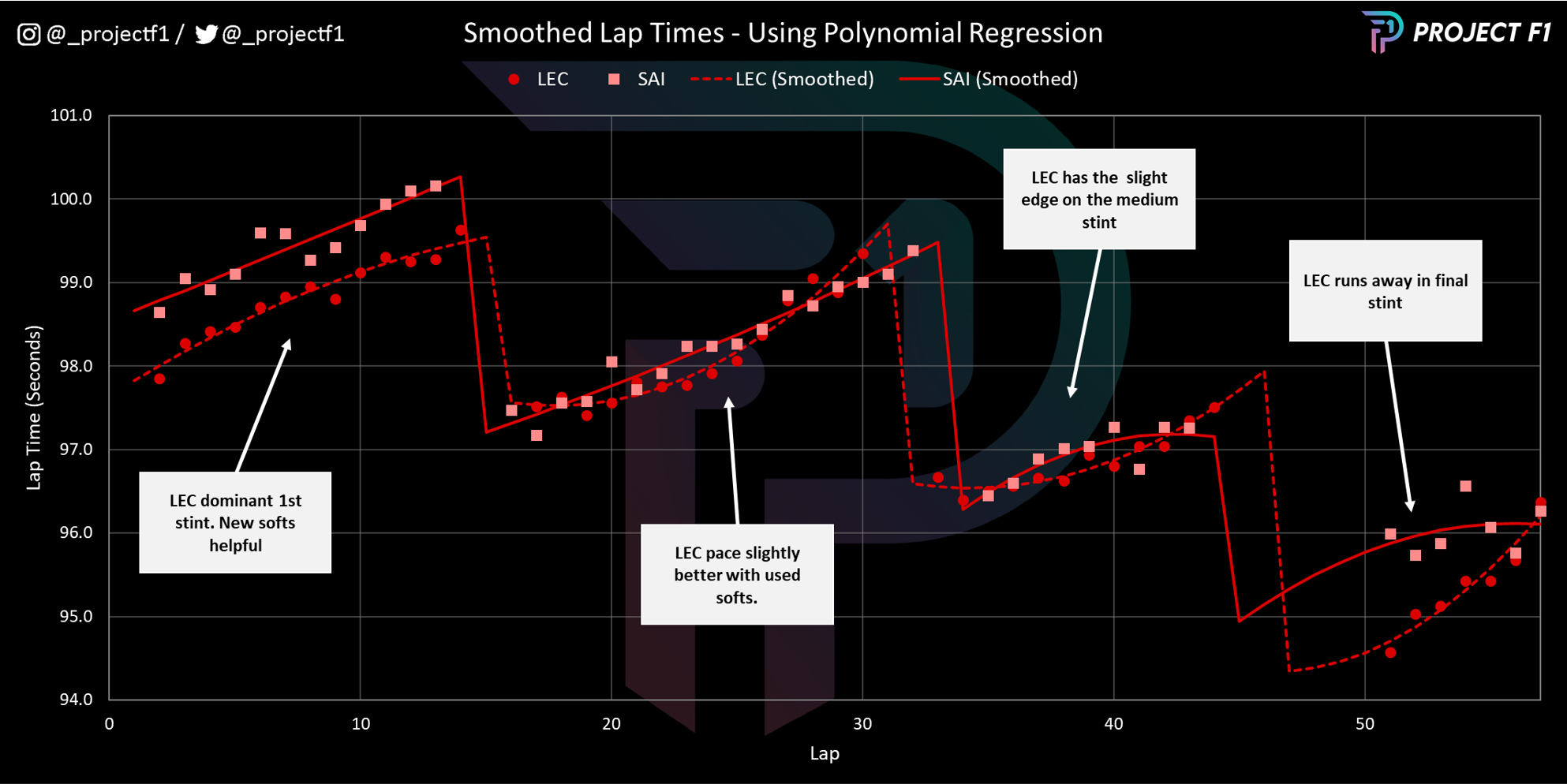 “It may sound a bit strange to say it now, but as a Ferrari driver it was my most difficult weekend,” Sainz admitted after the race. “I did not have the pace, neither in the race or in Friday practice, in quali I was suddenly there or thereabouts fighting for pole position but today in the race it exposed my weaknesses with this car, and it shows that I am still not quite there.”

The data backs his view up.

Leclerc had dominant pace across the whole race, especially in the first stint. While this was assisted by having ‘new’ softs, it is not the massive swing factor. In fact, Leclerc had equivalent/slightly better pace when the roles had reversed (Sainz with the new and Leclerc with the used tyres). The last stint also favoured Leclerc greatly. They were more closely match on mediums.

In the end, it was a comfortable win for Leclerc, who had better pace against both Verstappen and team-mate Sainz. The Spaniard will be hoping that the analysis this week unearths some answers before the Saudi Arabian GP in order to close the pace gap.

The undercuts were powerful and key flashpoints in the race, though Verstappen didn’t have much more to give to rewrite history, contrary to his vocal disagreement with the team.

Mercedes is well off the pace. Prior to the safety car the reigning constructors’ champions were set to finish almost a full minute behind race winner Leclerc. Fortuitous circumstances ahead netted Hamilton a valuable P3 finish with Russell following home in fourth but the team wasn’t bluffing: there’s plenty of work to do ahead of the Saudi Arabian GP.