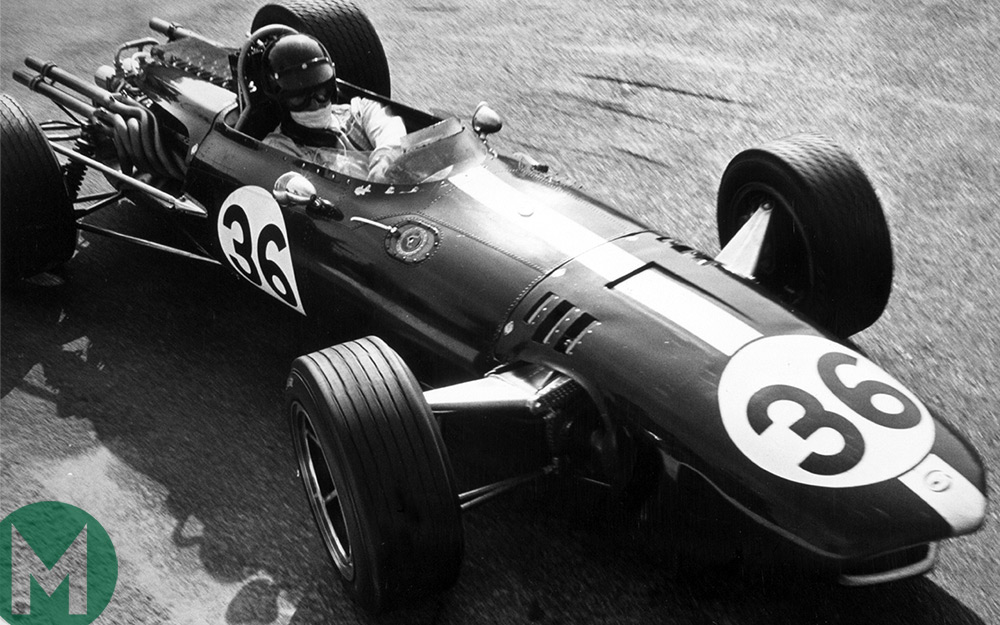 Has there been a more aesthetic Grand Prix victory than handsome Dan Gurney’s at Spa 50 years ago? His victorious Eagle had yet to sprout ugly wings, and forest rather than Armco still fringed this fearsome road circuit.

His 146mph winning average at the pre-dawn of downforce – Team Lotus had removed bib spoilers from its 49s after practice because of their underestimated unsettling effect at the rear – was a new all-time Formula 1 record, superseding Tony Brooks’ 1959 mark for Ferrari in the oddball, two-heat German GP at Berlin’s AVUS.

“Dan was a great driver,” says Jo Ramírez, then a mechanic for Gurney’s Anglo American Racers in Rye. “In our first year [1966] we had used a [2.7-litre] Coventry Climax four-cylinder, and it was only because of his driving that we didn’t do as badly as we had feared.

“And when we got our V12 from Weslake, we were competitive; it was born with 400 horsepower.”

So, too, was Cosworth’s DFV. This was the compact V8’s second outing – Lotus’s Jim Clark had won the Dutch GP on its debut – and it set the pace in practice, Clark lapping at 151mph.

His latest Eagle, chassis ‘104’, featured extensive use of magnesium (in place of aluminium in its monocoque) and titanium (in place of stainless steel in its suspension components, exhausts, etc) to compensate for the lanky Gurney’s weight, the fact that the basic design also had to withstand 500 miles of Indy, and the extra fuel, oil and water required compared to a DFV.

“It was such a beautifully made monocoque,” says Ramírez. “Every rivet was the same distance apart. And the exhaust pipes were incredible; the colours they went after they got hot… aww. The guy who made them, Pete Wilkins, an Australian, was the best fabricator I have ever seen. An artist.

“Most of the components arrived from Santa Ana, California [All American Racers’ HQ] and we put the car together in England. We had a little workshop and there were only four of us: Tim Wall, another Australian, was chief mechanic; plus me – a Mexican – and two Brits: Mike Lowman and Rouem Haffenden; and a nice, local lad we called Jesse, who would help in any way he could.

“Dan was brilliant, one of us, very conscious of the amount of work that needed to be done. But he was also a great fiddler. He always tried to do new things and sometimes changed stuff on the car that amazed us. Because he was such a good driver he would go quicker with whatever change he had made. But often he would then say, ‘Maybe you should put it back as it was.’”

“That being said, some of his inventions still work nowadays. The Gurney Flap really made a difference.”

Ramírez has an admission to make: “The start was downhill and Dan did not want to overheat the clutch by keeping the car in first and controlling the brake and throttle with his right foot. So he asked us to put a stone under the rear wheel.

“But it was difficult to find the right size – big enough but not too big – on an F1 grid. Whatever we put there did not work. Oops!”

Clark rushed into the lead. Team-mate Graham Hill, however, had stalled on the dummy grid; Surtees’ crankshaft would break at Stavelot; and Parkes would end his short F1 career when he crashed terrifyingly at Blanchimont on oil from Stewart’s BRM.

The race then settled to an order of Clark, pulling away at 2sec per lap, Stewart and Gurney: V8, H16 and V12. Although the latter felt sure that the smoking BRM wouldn’t make it, he had worries of his own.

“I remember it well,” says Ramírez. “Dan rushed into the pits, pulled down the handkerchief that he used to wear over his mouth, and shouted: ‘No fuel pressure!’

“That Lucas pump was not the best. Though we were always very careful to filter the fuel maybe a little bit of dust had got in; it was prone to that.”

The race had reached its crux after 12 of 28 laps, for Clark had pitted moments before Gurney because a spark plug had spat its ceramic body. (After another stop for the same reason, the Scot would finish a lapped sixth, with no clutch and only first, third and fifth gears.)

Stewart now led from Gurney and for a time their gap was static. But as the former became increasingly hampered by having to hold the gearlever in mesh – that oil! – and steering one-handed, so the latter’s fuel pressure began to recover and stabilise.

Ramírez: “The problem, whatever it was, had cleared. Thank God for that!”

Pulling almost 200mph in places – and setting the race’s fastest lap – Gurney drastically reduced Stewart’s advantage until he took the lead from him on lap 21.

His eventual margin would be 1min 03sec.

“I don’t remember the name of the hotel that we were staying in, but I do remember playing billiards there, in between glasses of champagne, and there being lots of phone calls for Dan.

“Unfortunately, we wouldn’t win again: Dan was leading the German GP with three laps to go when a driveshaft broke. He and [team manager] Bill Dunne were running out of sponsorship and patience [with Weslake]. Before we knew what had actually happened, Bill started shouting, ‘That bloody engine again!’ Later I think he wanted to make a hole in the ground and disappear.

“It’s true that it wasn’t how it should have been. The test-bed at Weslake was rudimentary. The whole place would shake every time we ran the engine and, on one occasion, nails from the roof fell straight down an inlet trumpet.

“The project needed more money – always tight – more development and a little more perseverance. It was a shame.

“But at least we had won one. And if you were going to win one, you wanted it to be at Monaco, Nürburgring or Spa. And we got Spa, beautiful Spa.”