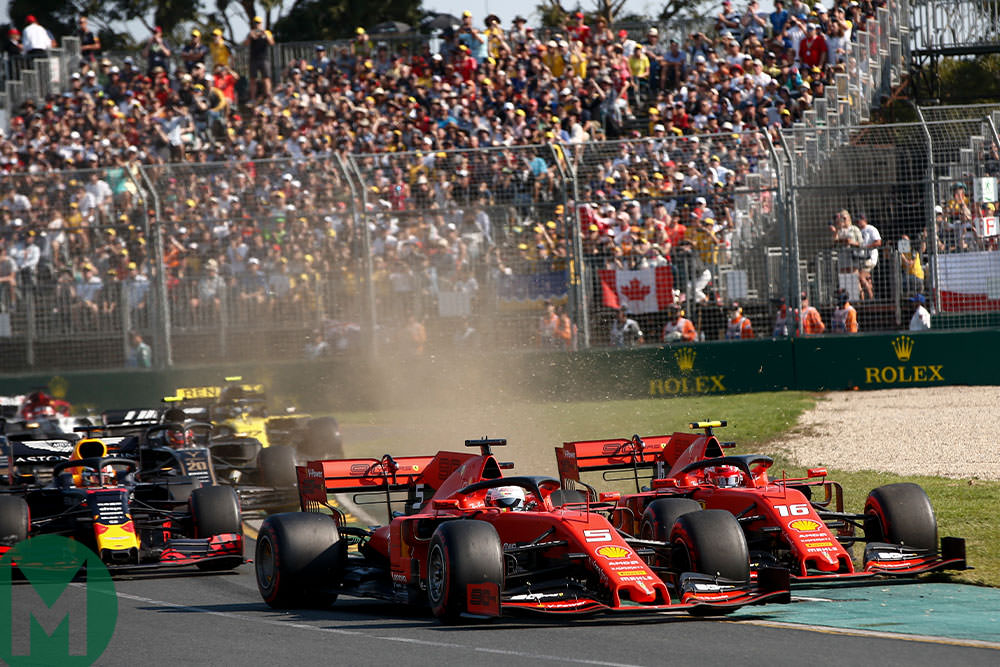 Ferrari Formula 1 boss Mattia Binotto has said that Ferrari wasn’t “comfortable” at the Australian Grand Prix from the get-go.

“Right from Friday, we didn’t feel comfortable at this track,” he explained.

“Even though we did a lot of work on set-up, we didn’t find the right balance and even our qualifying performance demonstrated that we were struggling to adapt to the Albert Park track.”

Charles Leclerc topped Q1 as he set a lap while the Mercedes pair was in the garage, but the two Ferraris were eventually split by Max Verstappen’s Red Bull in Q3. Leclerc ended up fifth on the grid; Vettel third.

“Then, in the race, in the first stint, we tried to keep up. Charles made a slight mistake, which meant he could not stay with the leaders,” continued Binotto.

Leclerc and team-mate Sebastian Vettel attempted to cut off Verstappen at the start of the race, but Vettel ended up blocking his team-mate in the process.

Leclerc – on hard tyres after his stop – caught up to Vettel, who was on the medium tyres, in the later stages of the race as Vettel struggled on his tyres, but the Monégasque driver’s chase was called off by Ferrari engineers.

“After his pitstop, Seb’s car never found the right grip level on the medium tyres and so the driver was unable to attack those ahead of him,” explained Binotto.

“When [Vettel] could no longer fend off Verstappen, we decided the most important thing was to get to the end, managing the tyres. When Charles caught up to him, it seemed wise not to take any risks.”

Verstappen ended up on the podium after producing what Mark Hughes called “one of very few genuine overtakes” in the race after his lap 25 pitstop.

But Ferrari was expected to deliver more and topple Mercedes’ dominance having topped preseason testing. However, Binotto puts Ferrari’s struggles down to differences between the Barcelona and Albert Park tracks, which made set-up hard to manage.

“It’s more bumpy and quite a lot windier [at Catalunya] as well, plus different temperature and weather conditions. So there are certainly external factors that may have influenced the performance of your car.”

But he still expects Ferrari to bounce back and give the Silver Arrows a run for its money in Bahrain on March 29.

“We didn’t find the right window or the right balance on the car,” continued the Ferrari team principal.

“It’s not fully understood yet. Something that we need to try and understand. One thing that we are certain of today and this weekend is that it is not the real potential of our car.

“We are pretty sure that the potential is certainly bigger, and we have not been able to exploit it through the weekend. We leave Australia with a lot of data to analyse and we will use that to work out how to get back to our actual level of competitiveness for the race in Bahrain in two weeks’ time.”