Max Verstappen bounced back from his FP2 crash to finish final practice fastest of all by almost a full second from team-mate Sergio Perez.

Rain made intermediates a necessity throughout as forecast precipitation made the Spa-Francorchamps circuit an even more difficult proposition for the drivers.

Lewis Hamilton finished third in FP3, over a second down on Verstappen. The Dutchman completed his laptime some time after the Mercedes had set an initial benchmark in the 1min 57s, while Mercedes team-mate Valtteri Bottas couldn’t crack the top 10 in the difficult conditions.

Here is how practice unfolded for the 2021 Belgian Grand Prix.

Rain clouds gathered and left a damp track for drivers to deal with on their return to action.

Carlos Sainz was the first to tentatively venture out onto the track with intermediates fitted to his Ferrari before the circuit began to fill up with five minutes gone for early installation laps. While parts looked slick on one end of the track, past the Kemmel Straight the surface was dry enough for slicks, leaving many in the garage waiting for conditions to improve.

Lando Norris opted for slicks with 11 minutes gone as the grey clouds moved away from the track and no more rain expected until the afternoon. He was the first driver to record a time, a 1min 50.191sec the initial benchmark.

His bravery pulled everyone else out of the garages and onto track fitted with slicks but the hard tyres for Kimi Räikkönen, the Finn suffering a spin under acceleration out of La Source on his opening flyer. Yuki Tsunoda followed his example and spun himself soon afterwards, briefly blocking Max Verstappen from exiting the pits before getting going again. 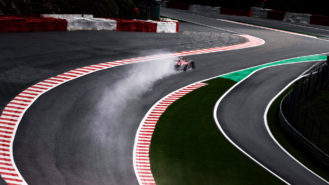 A wet race at Spa Francorchamps can see F1 at its most unpredictable. With rain likely for the 2021 Belgian GP, Mark Hughes explains why teams are forced to gamble on aero choices

Times quickly improved as Sebastian Vettel and then Esteban Ocon dipped into the 1min 48s. The Frenchman was the first into the 47s too, lowering his time to a 1min 47.250sec and later a 1min 47.219sec, though he was running medium compound tyres.

Verstappen registered his first time with 31mins remaining in the session to put Red Bull fastest on a 1min 46.879sec fitted with hard tyres. Mercedes meanwhile was mired down in 10th and 12th respectively, Valtteri Bottas ahead of Lewis Hamilton.

The latter reported he was generating good grip through the corners but the W12 was struggling down the straights, its higher wing set-up versus Bottas causing greater amounts of drag.

A brief yellow flag at the final corner was caused by Räikkönen hitting the pit wall and continuing at pit entry. The Alfa Romeo tagged the inside wall accelerating to the line and almost dropped his car entirely.

Verstappen was almost a full second clear of anybody until drivers switched to soft compound tyres for the final 15 minutes. Bottas rose to first on a 1min 45.199sec to lift Mercedes into the top five for the first time in the session.

Hamilton was a tenth off in the first sector but gained that and more back in the middle with the higher-wing set-up versus his team-mate. Traffic in the form of Nicholas Latifi in the final sector though forced him to bail on the lap and he remained 16th. Verstappen’s soft tyre effort was good enough only for second, 0.164sec off of the Bottas’s time.

Leclerc had set a personal best in the first sector but ran wide Malmedy. He survived the scare and trip through the gravel without making contact with the barriers.

As the session entered its final five minutes, the morning rain returned and the grey clouds darkened. There were few improvements in the field as the minutes wound down.

After rain fell in the interlude, second practice began in a similar vein to that of FP1 with drivers opting for intermediates on a rapidly drying track. That decision quickly proved conservative as drivers pitted for slick tyres and set an early pace.

Norris once again set the pace early on, a 1min 48.291sec the time to beat as conditions rapidly improved at Spa. The McLaren man quickly lowered that benchmark to a 1min 47.138sec as the track quickly filled up.

His time was beaten several times over approaching the one-third mark, Bottas the pace-setter on medium compound tyres.

With half an hour remaining, drivers swapped over to soft tyres but it brought no improvement for either Mercedes driver. Hamilton couldn’t better his initial effort and remained 0.3sec down on the benchmark time. Fernando Alonso found time on softs, rising to fourth place on a 1min 44.953sec for Alpine.

Verstappen improved to go fastest of all with just over 20 minutes left of FP2. The Red Bull driver lowered the target to a 1min 44.472sec, narrowly edging Bottas’s time by 0.041sec.

In the final stages, mistakes started to emerge from a few as plenty pushed the limits of what was possible. Ocon spun out of Les Fagnes chicane before getting going again but his mistake was not the final one

A twitch out of the Les Combes chicane sent Leclerc wide and the Monégasque couldn’t catch his snap of oversteer in time, catching the barriers and damaging the front left suspension in the process.

Verstappen was looking good until the final five minutes of the session. The Dutchman lost the rear end of his Red Bull out of Malmedy, catching the barriers with the rear of his Red Bull and damaging the rear left of his car. It brought out the red flags to end FP2 running.

The rain had been fairly constant all morning ahead of FP3 requiring wet weather tyres. Those that did venture out were split on intermediates and full wets.

Nikita Mazepin was the next to find his way onto the runoff areas. A lock-up heading into Turn 8 sent the Haas very deep but the Russian recovered to the track without damage.

Bottas locked up into Les Combes and ruined his first attempt at a flying lap as conditions proved marginal between the full wets and intermediates.

Team-mate Hamilton repeated the mistake on his lap on inters and reported his brakes were not working as intended. A subsequent lap was good enough to go fastest in the early stages with a 1min 57.996sec.

Verstappen’s initial efforts were a few seconds off the pace as he got to grips with the circuit but with 20 minutes gone, the Dutchman leapt to the top of the timings by over a second from Hamilton.

The Red Bull driver opted for a very skinny rear wing and was quickest through the speed traps as a result, a hint of the direction Red Bull will go with set-up despite the threat of rain for Sunday.

The track fell silent with half an hour remaining as drivers finished up the initial running on intermediates in an effort to save the green-walled rubber for the rest of the weekend.

Grey skies returned for the latter part of the final practice session as drizzle began to fall once again, taking the track away from drivers. Alonso cut across the Les Combes chicane after failing to make the corner on a flying lap attempt with under 20mins to go. Hamilton was the next to cut the chicane in a carbon copy of the same mistake.

Verstappen called time on his session early, dipping into the Red Bull hospitality unit with over 15 minutes of final practice remaining while others tiptoed around in the final moments.

Lando Norris braved it on soft tyres with three minutes left of the session. He almost dropped the McLaren on pit exit. He crawled around with the crossover point still some way off for wets to dries.