The final practice session for the Russian Grand Prix has been abandoned due to heavy rain at Sochi. A decision will be made later today as to whether qualifying will go ahead on Saturday or be postponed to Sunday ahead of the race.

Formula 2 had been scheduled to run its first race of the weekend on Saturday morning but conditions prevented any running from taking place. The F1 qualifying session will take priority over the F2 and F3 sessions yet to run for the remainder of the race weekend.

“In the interest of safety [the decision has been taken] to modify the Official Programme by cancelling Free Practice Session 3 due to Force Majeure,” the official decision from the stewards said.

“For the purposes of the regulations and associated time limits, Free Practice Session 3 will be considered as having taken place, except where otherwise advised by the Race Director.”

Pierre Gasly was a surprise third for AlphaTauri as Daniel Ricciardo struggled for McLaren, finishing the second session 17th-fastest.

Here is how practice unfolded for the 2021 Russian Grand Prix.

Carlos Sainz led the way as the lights went green for first practice. There was no sign of any downpour and blue skies and plenty of sunshine lit up Sochi Autodrom.

Most opted to run the hard compound tyres for the opening laps on a very green track. The times tumbled as the surface gripped up but it was Charles Leclerc who set the early pace on a 1min 36.708sec on softs. The Monégasque was the Maranello man with the new power unit this weekend which he was putting to good use.

Hamilton and Bottas got within half a second of the Ferrari while running hard tyres in the opening ten minutes until the Finn turned up the wick to post a 1min 36.412sec and go fastest. Hamilton also improved to go ahead of Leclerc. Verstappen’s first run was on softs but only good enough for fourth.

He improved as the clock ticked towards 20 minutes gone; three-tenths clear on a 1min 36.055sec.

Pierre Gasly was the first driver off at Turn 2 and taking to the escape road through the orange marker boards. Drivers will have to weave their way through the boards to avoid a time penalty in the race this weekend if they are deemed to have gained an advantage.

After swapping to the softs, Bottas shot back to the top of the timesheets a comfortable 1.2sec clear with a 1min 34.427sec lap. Hamilton could only manage a time 0.2sec down on his team-mate’s efforts on the red-walled tyre.

A very brief virtual safety car was deployed to recover debris at pit lane exit with 24 minutes remaining though it was withdrawn just as quickly.

With wet weather predicted to arrive tomorrow in serious fashion, plenty opted to use up more sets of the soft compound tyres, anticipating the rain falling on Saturday.

Lando Norris hadn’t run the softs yet but on his first flying lap, a snap of oversteer at Turn 10 meant he had to bail out of the attempt or face a trip into the barriers. Verstappen closed the gap on a second run to 0.227sec off the top spot but couldn’t split the Mercedes duo. He slotted into third position, four-tenths clear of Leclerc in P4.

Sebastian Vettel had been anonymous for much of the session but the Aston Martin driver put in a solid lap, shading Gasly’s AlphaTauri to complete the top five.

The chequered flag fell but that didn’t stop the drama. Norris reported that he’d crashed on his in-lap. The McLaren driver lost the back end of the car making the turn into the pit lane entry and his front wing clipped the wall, damaging the left-front endplate.

Max Verstappen’s hopes for a Russian Grand Prix win took a major dent ahead of the second practice session as Red Bull confirmed that he’d be taking a second grid penalty this weekend for a fresh power unit.

Daniel Ricciardo was another driver to take a fresh power unit after issues were detected in FP1. Fortunately for the Australian, it did not constitute a grid penalty.

Charles Leclerc set the initial pace to beat on a set of soft tyres, his time of a 1min 34.925sec was quickest in the opening 10 minutes of the second practice session.

Fernando Alonso was the next to top the timing sheets, setting a 1min 34.762sec for Alpine to lower the benchmark as others began to focus on qualifying simulations.

After topping FP1, Bottas wasted no time in getting down to business. His 1min 33.593sec was comfortably quicker than the time set by Verstappen, who ended up over a second down on the Finn’s flying effort despite being on the same compound of tyre.

Things weren’t plain sailing for Mercedes though. Coming into his pit box, Lewis Hamilton overshot his marks and sent his front jack man flying. Fortunately, the mechanic was ok after the incident. When he couldn’t beat his team-mate’s benchmark time and slotted into P2.

Leclerc had set a decent pace in FP1 but a spin in second practice was far from ideal. The Ferrari driver dropped his car on the exit of Turn 8.

He wasn’t the only one to come unstuck during the second session though. Antonio Giovinazzi crashed out of the session. Like Leclerc, he too lost the car but unfortunately for the Italian ended up shunting into the barriers, damaging the rear wing. He was informed that he had to pull over despite being able to drive away from the crash.

A 10-minute red flag delay followed and there were a few improvements in the final stages. Gasly was able to jump up to third for AlphaTauri on a 1min 33.845sec. A bump across the kerbs on a subsequent lap resulted in front wing damage for the Frenchman,

Esteban Ocon was another late improvement, rising to fifth place, behind Norris but ahead of Verstappen. Hamilton finished 0.044sec behind his team-mate by the end. 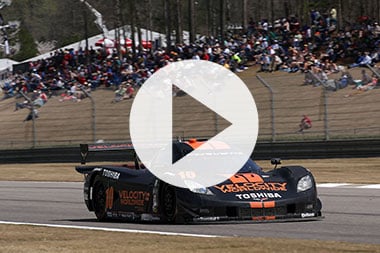 Next year, Grand-Am and the ALMS will combine under the banner of United SportsCar Racing, bringing together the two major sports car series in North America. While the ALMS has… 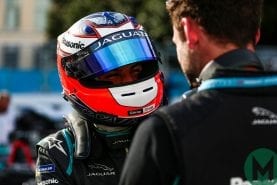