Stop with the predictions. Stop with the script writing. You just can’t tell where this Formula 1 season is going to take us next.

On Thursday, the consensus among many observers was that Max Verstappen was closing in on the title, heading to a track expected to still favour Red Bull – although not as much as Mexico City – with a 19-point advantage. After Lewis Hamilton took a new power unit component and associated five-place grid penalty on Friday, that feeling only grew.

By Friday afternoon, it felt like game on as Hamilton’s immense pace with his new engine gave him first place on the grid for the Sprint. Suddenly, he was going to walk to victory this weekend.

Then there was rear wing gate that led to Hamilton’s disqualification and a P20 grid slot on Saturday. We’re back to “all over” in the title race.

But then Hamilton’s sensational recovery to fifth place suggested he most certainly had the pace to fight for victory on Sunday, and coupled with Valtteri Bottas beating Verstappen to secure pole, we were returning to the defending champion being heavy favourite. 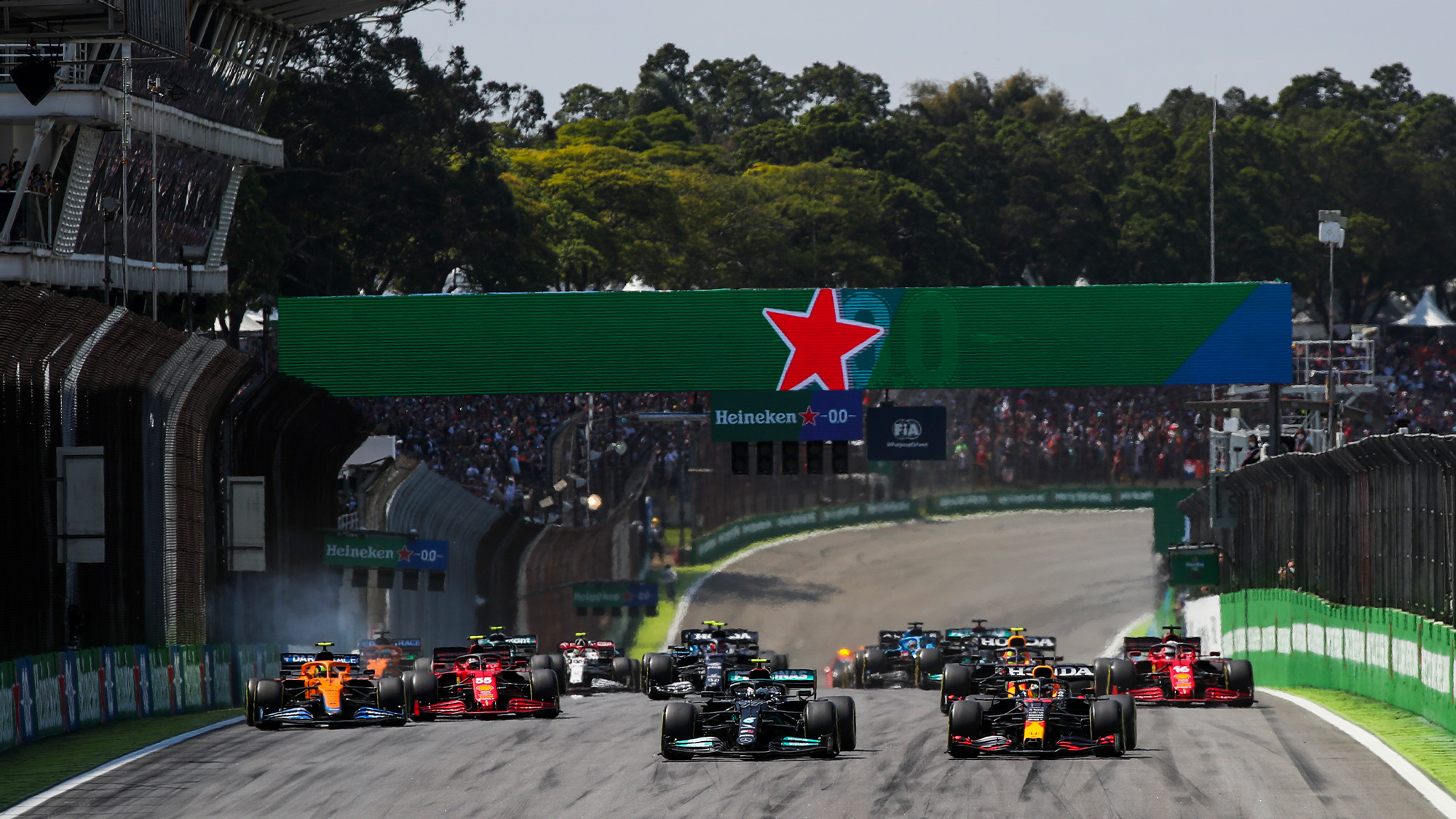 Verstappen moves ahead of Bottas at the start, as Norris clips Sainz on the left

After all the whiplash, what would help Hamilton’s cause would be Bottas retaining the lead at Turn 1, but a poor getaway meant he failed to do so as Verstappen got ahead, and then a wide moment at Turn 4 allowed Sergio Perez into second place.

“Max made a great start but mine was also pretty average,” Bottas said. “I was hoping that would be enough to maintain the lead, but he was ahead of me going into Turn 1. My issue was there was too much clutch slip, so I lost a bit of grip and didn’t drive off as good as it should. Then in Turn 1 I tried to brake as late as I could but Max fought hard and I was off track at some point. But, like I said, he was already ahead so there wasn’t much to do…

“Then, getting out of shape in Turn 3 cost me on the run down to Turn 4, ran a bit wide there, defending, so, for me, lap one was a bit of nightmare because this morning one person after another kept telling me what to do in the first lap and how important it was for me to stay ahead…” 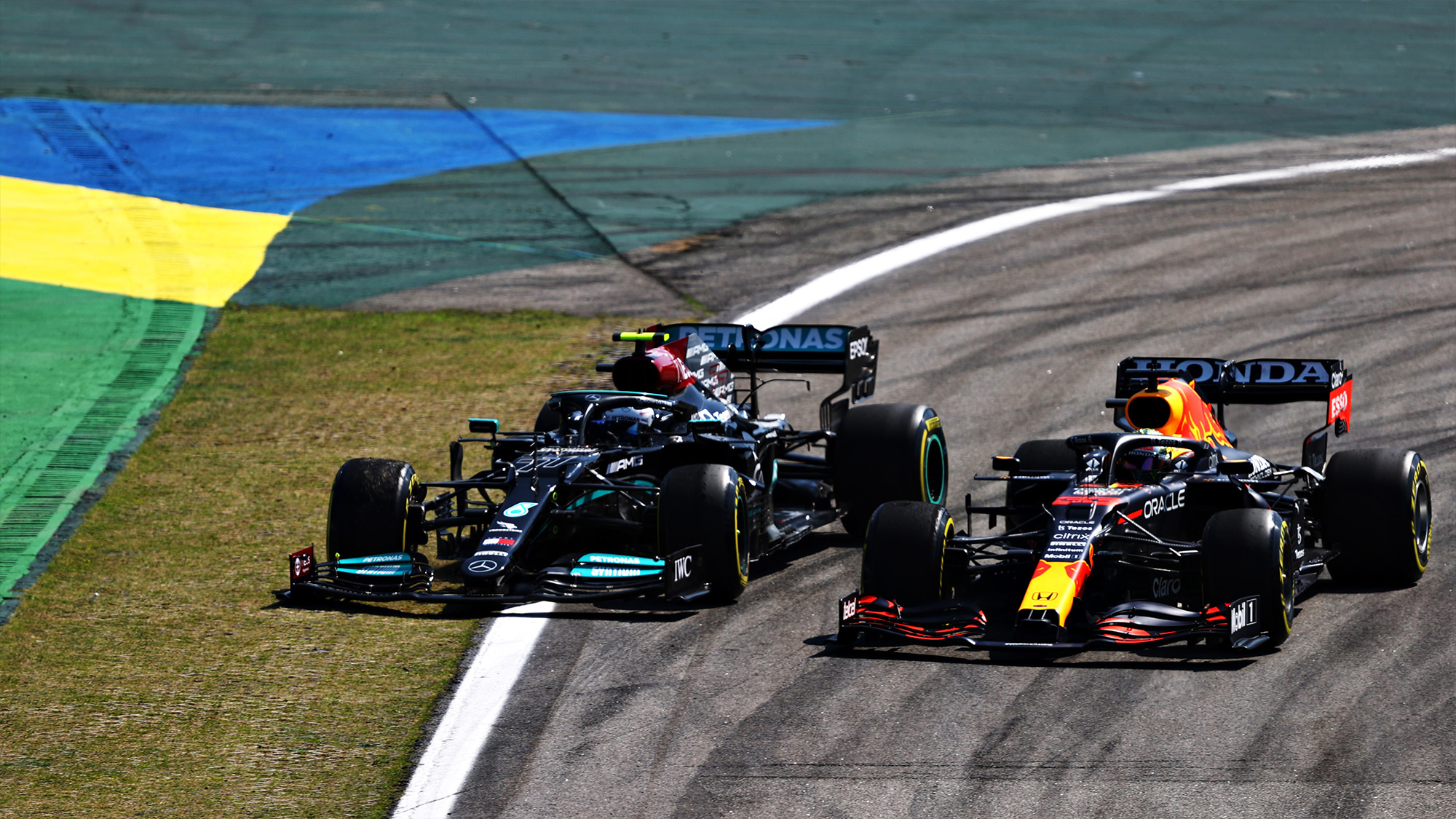 Bottas runs wide at the start

The Red Bull pair tried to get away, but behind them Hamilton was coming, and quickly. His start was aggressive and beautifully judged, getting into eighth place down the inside at Turn 1 and then pulling a brave move around the outside of Pierre Gasly at Turn 6 to gain another spot.

Sebastian Vettel was dispatched into Turn 1, and then he started lap three clearing Carlos Sainz – who had been involved in light contact that gave Lando Norris a puncture at the start – before ending it cruising past Charles Leclerc for fourth place.

Not that the inspired Hamilton needed any help, but Yuki Tsunoda unwittingly provided some at the start of the fourth lap when a late lunge on Lance Stroll into Turn 1 caused contact, breaking off his front wing and leaving debris all over the track. The safety car was deployed just after Bottas had let Hamilton through at the same corner a lap later, bunching the field up. 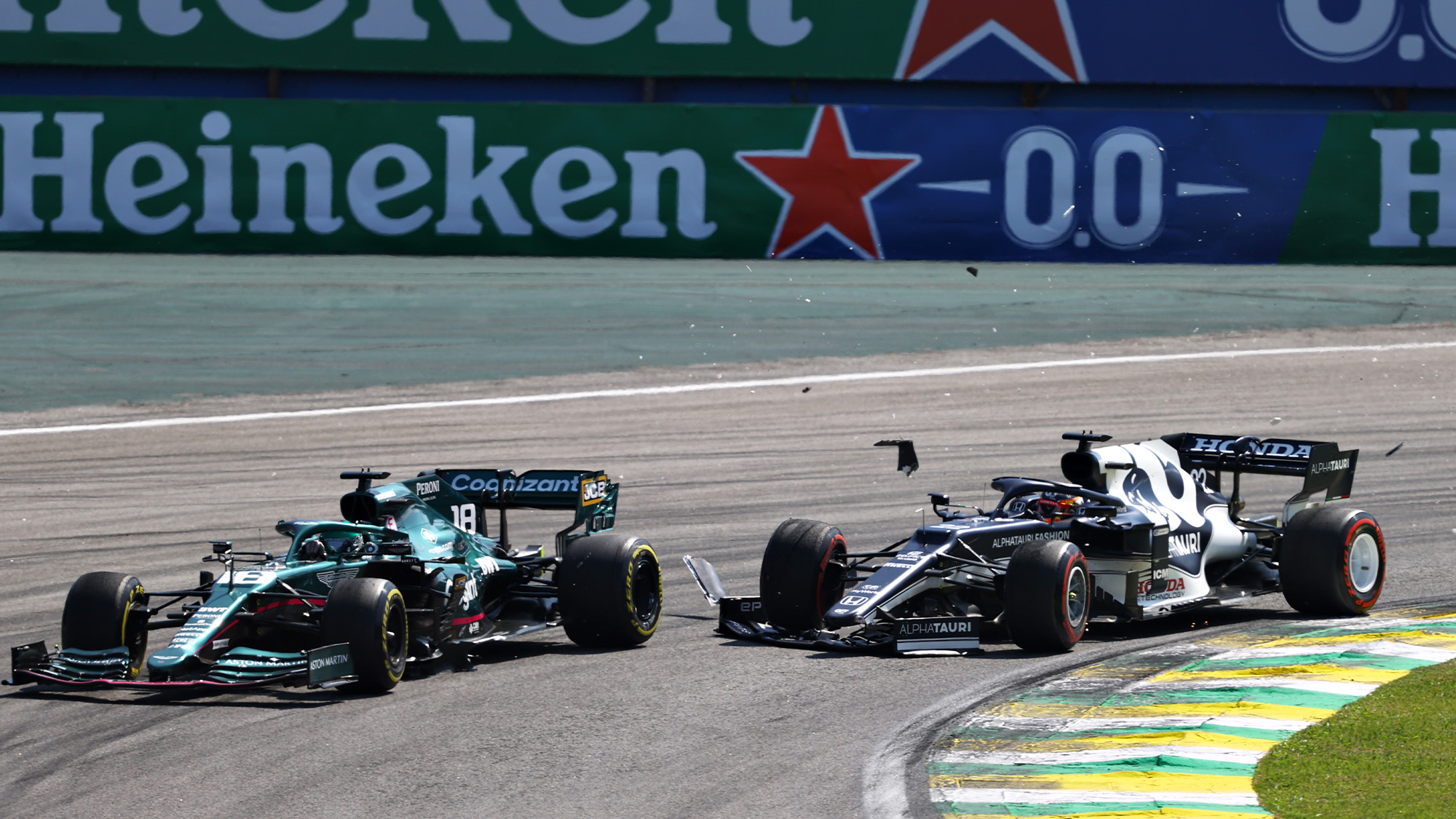 Tsunoda lost his front wing in Turn 1 clash with Stroll

On the restart, the Red Bull pair held on, while contact between Mick Schumacher and Kimi Räikkönen led to another broken front wing and more debris to clear – this time with a virtual safety car.

Perez kept Hamilton at bay for more than ten laps, and when the defending champion did find a way past into Turn 1, Perez simply used DRS to retake the position before Turn 4. A lap later, Hamilton prevented a repeat by closing the door earlier after completing the move at the first corner, forcing Perez to lose a bit of ground through the Senna S.

“I mean, the straight-line speed was from another planet,” Perez said. “I looked at my mirror at the exit, and I felt very safe. But then I look back into it again and he’s right next to me. It was really impressive.” 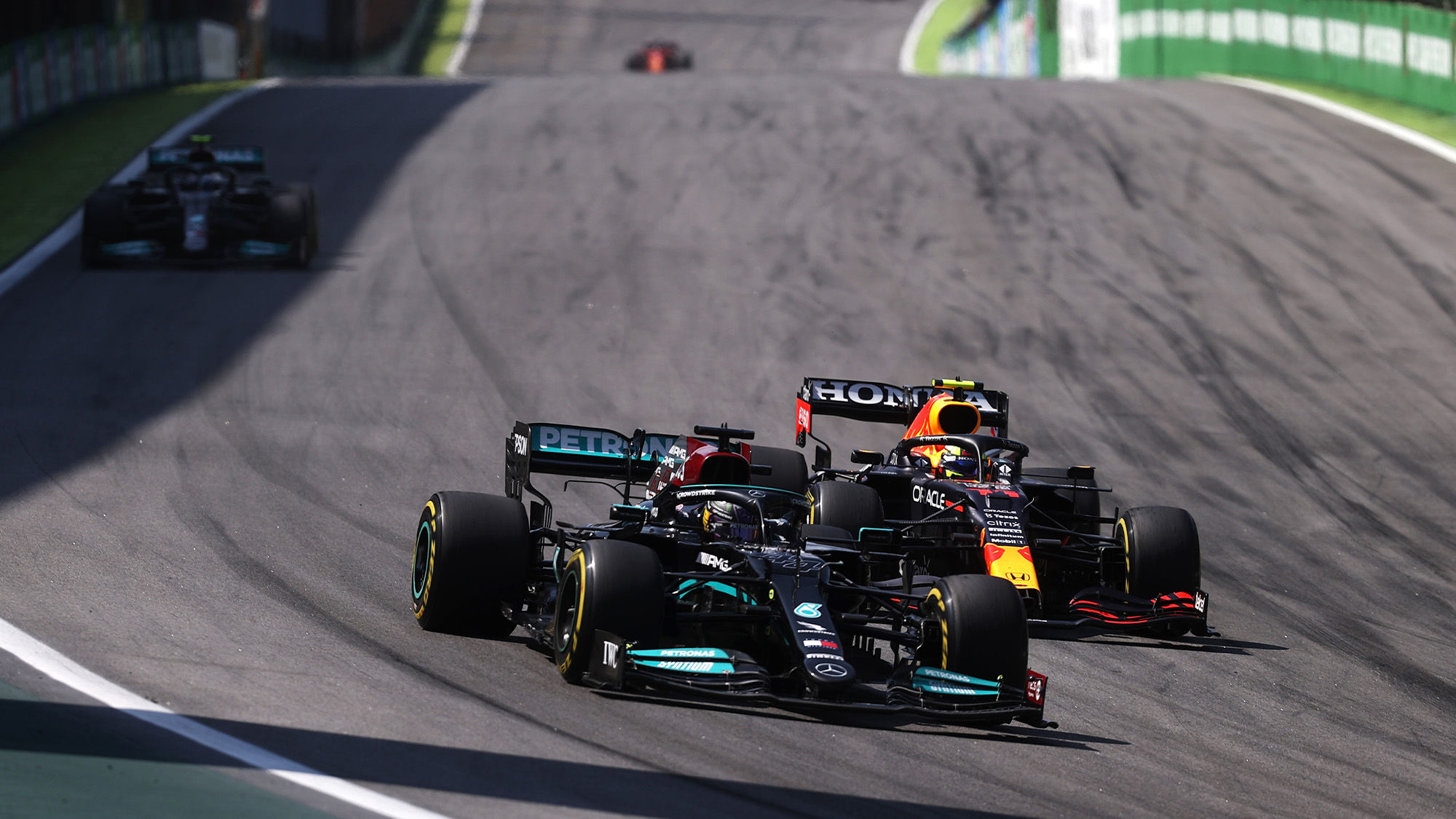 Turn 1 was a happy hunting ground this weekend for Hamilton, who passed Perez on the outside

Verstappen had a lead of over three seconds that he was holding, but in hotter conditions than the rest of the weekend, lap times were dropping off for all. So when Pierre Gasly made a first planned pit stop from P7 on lap 25, other frontrunners reacted and gave up on a one-stop attempt.

Hamilton was next in a lap later for hard tyres, with Sainz also coming in for mediums at Ferrari. That one lap allowed the Mercedes to halve the deficit to Verstappen when Red Bull responded immediately, the championship leader emerging a little over a second ahead and under a bit of pressure.

Perez was next in but Bottas stayed out, and the Finn – who had defended well on the safety car restart having been understandably unable to attack Hamilton – got lucky as Stroll lost more bodywork after his earlier collision with Tsunoda and the VSC was once again deployed to clear debris. That allowed Bottas a pit stop that cost him 11 seconds rather than 22 under green flag conditions, leapfrogging Perez to third.

By now, Verstappen had already warned Red Bull about the undercut, and despite the top four all running hard tyres, it was only a 13-lap stint before the leader came in again to retain track position. Bottas, Perez and Hamilton all followed in the subsequent laps, giving the latter a three-lap advantage but needing to pass his rival on track. 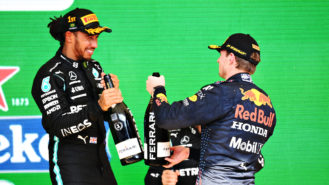 An extraordinary performance from Lewis Hamilton saw him overcome being thrown to the back of the grid for the Saturday sprint race, taking a five-place grid drop for the main…

“Lewis was behind me and I could see there was a lot of pace, it was already quite tough to match that,” Verstappen said. “I think in general we did all the right calls in trying to just cover, so there is not much you need to say about that. We were just a bit too slow. Of course, this weekend, they were very quick on the straights so I had to get my lap time through the corners but it was very hard on the tyres this weekend, the track. So it was not ideal.”

Hamilton felt his best chance was early, so consecutive fastest laps put him in DRS range and he attacked Verstappen on Lap 48. The Red Bull driver defended the inside towards Turn 4, Hamilton got ahead on the outside but then Verstappen ran both of them off the road on exit, with the stewards noting it but deciding no investigation was necessary after plenty of radio chatter from each team.

“Of course not!” Hamilton sarcastically exclaimed when told there would be no penalty over team radio, but his tone changed by the end.

“In the heat of the moment I don’t really know. I think I was ahead initially and then he held his ground and then we both ran out of road. Well, I think he was running out of road so I had to avoid and go off road, but I mean I didn’t think too much of it. I have to watch the replay. It’s hard battling, wouldn’t expect anything less really. We didn’t touch wheels, which was good.”

Verstappen himself admitted he used the run-off once he was struggling to make the apex, but was pleased with the way the situation was handled.

“I braked a bit later to try and keep the position and the tyres were already a bit worn,” Verstappen explained. “So I was really on the edge of grip, so that’s why I think I was already not fully on the apex. And it’s a safer way, of just running a bit wide there. In a way I was, of course, happy that the stewards decided that we could just keep on racing, because I think the racing in general was really good today.” 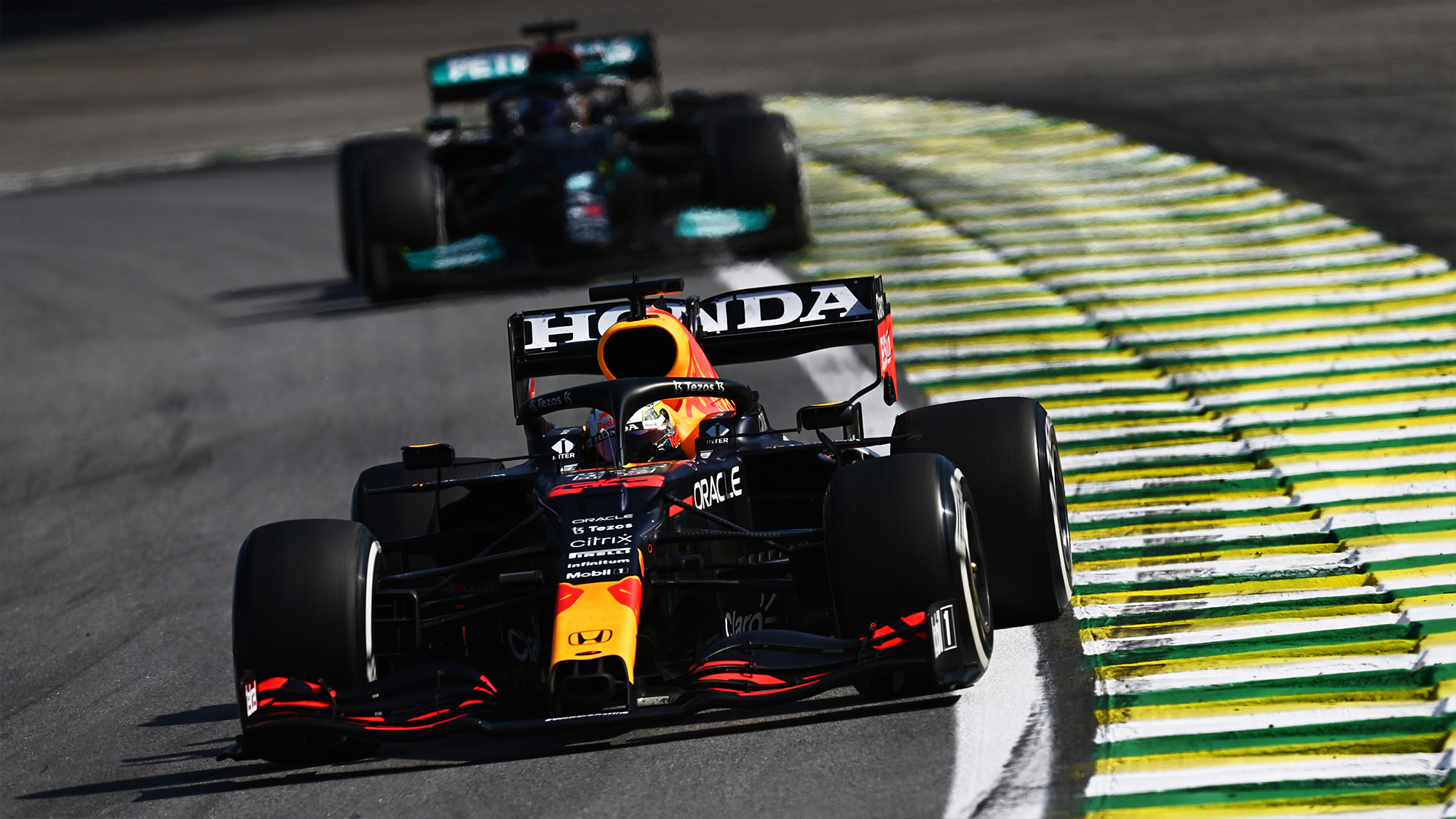 Hamilton biding his time before taking the lead from Verstappen

Ten laps later, Hamilton was back within range but starting to run out of time. As the pair again went side-by-side towards Turn 4 – after Verstappen had been weaving on the straight – Hamilton attempted a cutback that didn’t work out. But he stayed close enough to hint at a move into Turn 1, forcing Verstappen to defend and opening the door for an easy DRS pass a lap later.

“I kind of got into Turn 1 and dummied him – kind of dummied him, as such. I was either going to dive super late into Turn 1 so he had to block, then I got to position the car correctly through Turn 1 and 2 and knew through Turn 3 I’d have a far better slingshot past him as I was close, then I knew I was ahead going into the braking zone.”

From 20th on Saturday to the lead on Sunday, the job was done. Hamilton pulled away to take a vital victory, while Verstappen’s tyres fell away further and he just ensured Bottas couldn’t threaten his second place.

Perez made a late stop for softs and took the fastest lap point of Hamilton on the final lap without losing fourth, with Leclerc and Sainz a distant fifth and sixth on a good day for Ferrari. Gasly had to make do with seventh but it was hard-earned, passing the one-stopping Fernando Alonso and Esteban Ocon late on, with Norris recovering to tenth after his early puncture to score a solitary point for McLaren after Daniel Ricciardo retired with a power unit issue ahead of him. 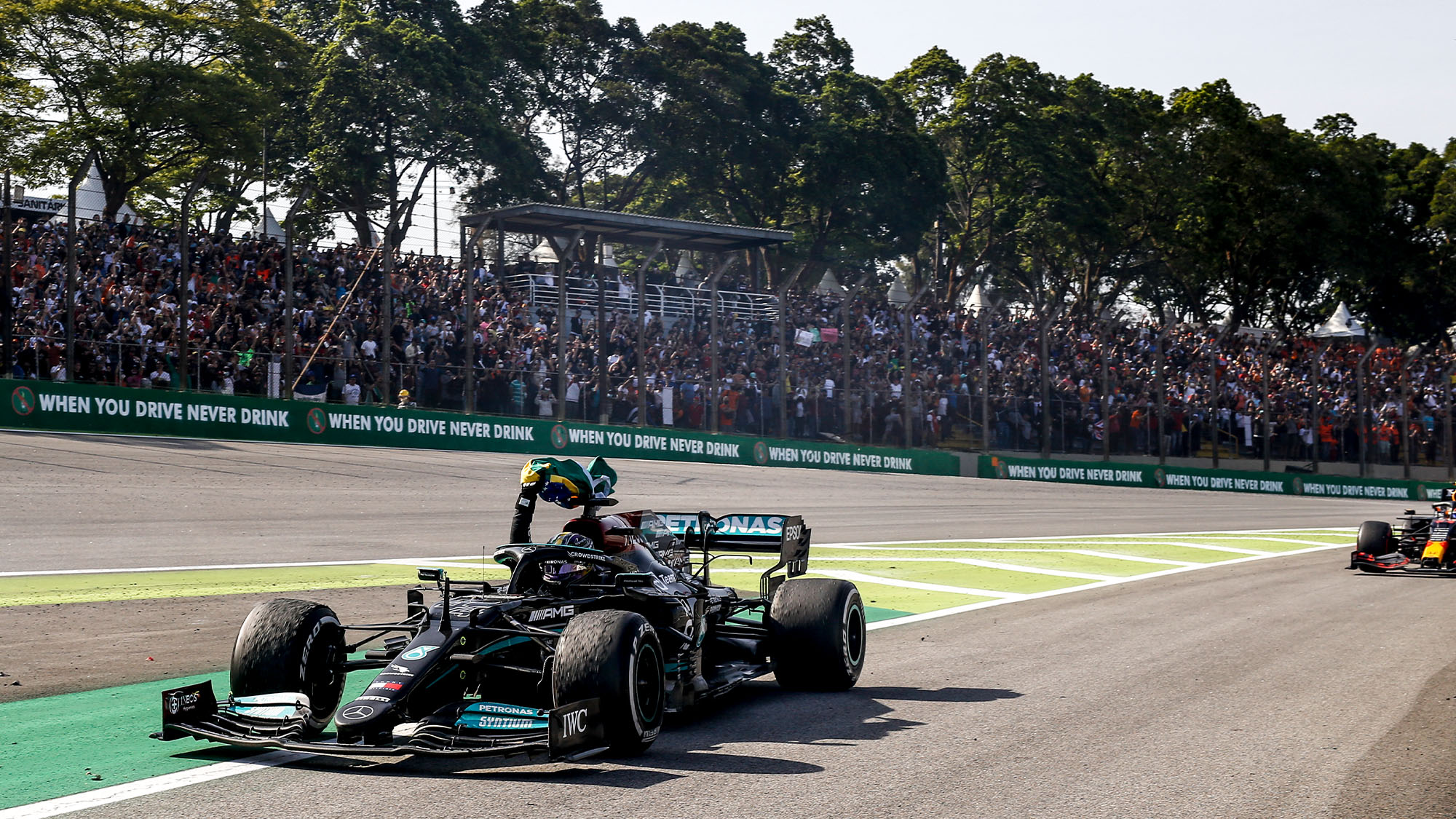 There was still time for a little more drama as Hamilton was summoned to the stewards for undoing his seatbelts on the cool-down lap, reaching out of the cockpit for a Brazilian flag he proudly displayed on the podium. But a fine was all it was, ensuring the topsy-turvy weekend ended with a 14-point gap between the championship contenders.

It is the 11th time the two have shared the top two steps this season – including the past three races – and for all Hamilton’s brilliance it was another extremely good display from Verstappen that ensured the points’ swing wasn’t as dramatic as the performance difference.