The Chinese Grand Prix was another soaking affair, yet this weekend it wasn’t Brawn GP scoring a one-two but Red Bull. Sebastian Vettel, who proved his prowess in the wet at last year’s Italian Grand Prix, once again drove faultlessly to score a maiden victory for the team. 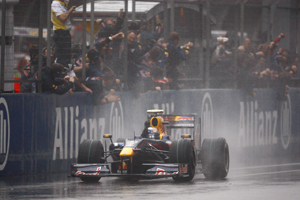 1st: Sebastian Vettel
Having put his car on pole the German managed to keep the Brawns at bay and, despite atrocious conditions and safety cars, he drove brilliantly to his second career win. Escaped serious damage after Toro Rosso’s Buemi drove into the back of him, which goes to show just how much luck can play a part when it’s that wet. 9/10 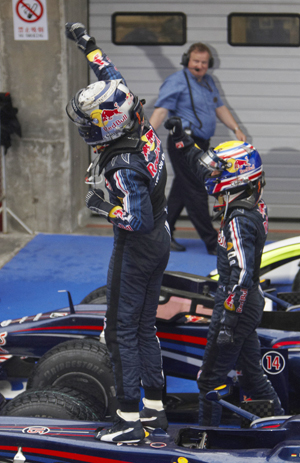 2nd: Mark Webber
A career best for Webber who, although he was outdriven by his team-mate, managed to keep his car on the track – most of the time – and battled well with Button’s Brawn. 8/10

3rd: Jenson Button
Complained of severe grip problems after not getting any heat into the tyres, which meant that at some points he was weaving down the straight. Another solid race for Button, whose smooth style is just what’s needed when it’s this wet. A few mistakes, but overall a good weekend. 8/10 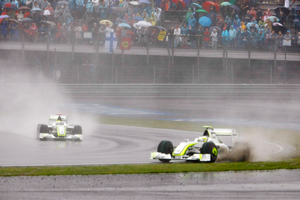 4th: Rubens Barrichello
Even though he has yet to outclass his team-mate in a Grand Prix this season Barrichello drove a solid, if a little uneventful, race. 7/10

5th: Heikki Kovalainen
Unlike Hamilton, Kovalainen drove a mature race and kept his car on the black stuff. Even if he didn’t have the speed that his team-mate showed on occasion, he will be satisfied with completing more than one lap of a Grand Prix, something that must have been starting to worry him a little. 7/10 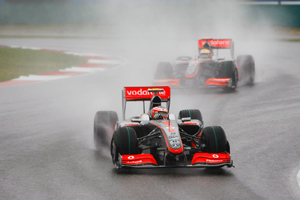 6th: Lewis Hamilton
Got his car into Q3 for the first time this season and started well from ninth, storming through the field to fifth, only to spin off. He stormed through the field again, and then span off again… While he showed blistering pace his driving style means he doesn’t always conserve his tyres well. He complained of losing all grip on his front left after five laps, but he must accept some of the blame for that. Well done for pushing hard though – he had nothing to lose after all… 5/10

7th: Timo Glock
After starting 19th on the grid Glock drove smartly up the field, only for a clash with Heidfeld on lap 13 to delay him. He recovered well and despite meandering off course on a few occasions – something that you have to forgive drivers in weather like this – he clawed his way back up again. Although he is yet to do something spectacular, something tells me that he has a bright future ahead. 7/10

8th: Sebastien Buemi
The only rookie on the grid had a brilliant race, challenging Vettel for the drive of the day. He was lucky to escape after hitting the back of Vettel (who had slowed under yellow to avoid passing the car in front, which he thought was Barrichello but was in fact Trulli) but recovered well to another points-scoring finish. 8/10

9th: Fernando Alonso
Having put his car second on the grid with a light fuel load, the team decided to pull him in early after only seven laps – when the safety car was still out. He rejoined at the very back and with a full tank of fuel and zero visibility he struggled to work his way through the field. The Renault, however, was hardly the car of the day. Eventually made up ground, but a spin late meant he missed out on points when he was starting to show some real pace. 7/10

10th: Kimi Räikkönen
The Finn had real problems finding any grip at all and seemed to be going backwards at times. His team-mate had no such problems, but Räikkönen’s lack of speed was such that Hamilton overtook him on numerous occasions before spinning off again. Although he was classed fourth at one point he never worked his way back up the field after pitting. 5/10

11th: Sébastien Bourdais
His rookie team-mate showed that the Toro Rosso was one of the cars to have in the wet conditions, but Bourdais never looked like setting the world alight and spun so often that he never kept position. 5/10 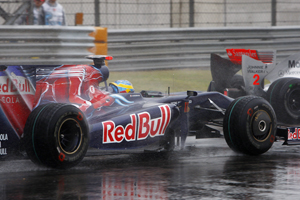 12th: Nick Heidfeld
After a good start Heidfeld took over Webber’s mantel of the ‘unluckiest man of the day’, aquaplaning off the track, colliding with Glock on lap 13 and then being hit by one of Sutil’s wheels from the wreckage of his crash and losing four places as a result. 6/10

13th: Robert Kubica
Trulli was going so slowly it was inevitable that someone would drive into the back of him, and that someone was Kubica. The replacement wing fitted after that clash eventually worked loose, so he lost even more time pitting again. Kubica is a great driver but has had little to shout about so far this season – I suspect BMW will struggle to hold onto him if it can’t start to find some extra pace somewhere. 6/10

14th: Giancarlo Fisichella
Fisichella spent much of his time finding his way back onto the track and suffered severe graining problems with his tyres. Another sedate race for a man who can’t afford to keep being outdriven by his team-mate. 4/10 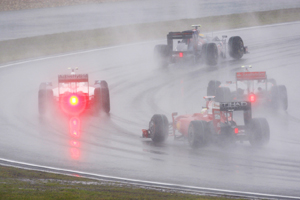 15th: Nico Rosberg
A day to forget for Rosberg who complained of severe visibility problems – something I would have thought most of the grid was suffering with… He did drive well, when he could see, but never really looked set to challenge. A late gamble on intermediates was a real long shot, but you’ve got to admire him for a least taking a punt. 5/10

16th: Nelsinho Piquet
Another dreadful day for Piquet. Again hugely outclassed by Alonso in qualifying and the race. He had to stop twice for a new nose after two huge spins and really doesn’t seem to have any positives to take away from the weekend. Another few races like this and his seat may not be safe for the rest of this season, let alone in 2010. 2/10

17th: Adrian Sutil
A good performance from the German, who was looking at a points finish until a spin and a big impact ended his race on lap 51. Another very disappointing outcome following a good strategy by the Force India team and a good drive. 6/10

18th: Kazuki Nakajima
Although he was unlucky to retire with transmission problems, he didn’t exactly make a huge impact when he was ‘on’ the track. Numerous spins and off-track excursions meant this was another weekend to forget. 4/10

19th: Felipe Massa
If Räikkönen’s speed was any measure of how fast the Ferrari was in these conditions, then Massa drove an absolute blinder. The Brazilian – often criticised for only being able to drive a good race from pole, or for not being able to drive in the wet (please see Silverstone 2008) – proved his critics wrong. A real shame that an electrical problem robbed him of his first points in 2009. 8/10

20th: Jarno Trulli
The Italian really struggled in the wet, complaining that he couldn’t get any grip and only lasted 13 laps before Kubica ploughed into the back of him. 5/10