Christian Horner talks about signing Fernando Alonso to Red Bull, the 2021 Formula 1 engine regulations and building a team around Max Verstappen, from the Motor Sport podcast in association with Mercedes-Benz, coming soon. 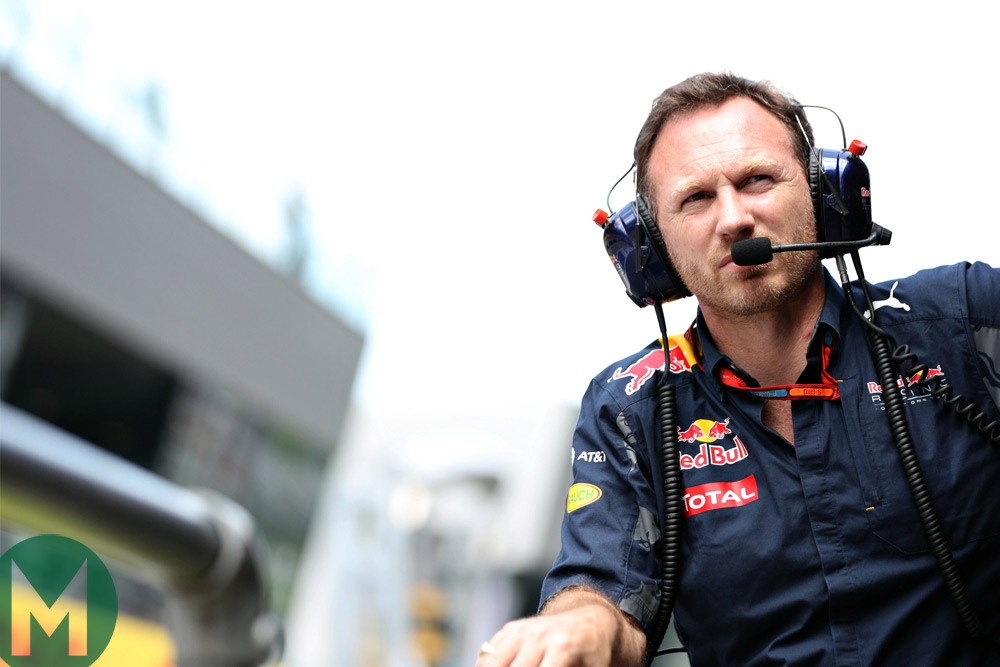 I think we go for outright skill, passion, and determination when we sign drivers; drivers with big hearts and big talent. Helmut is responsible for the junior programme and he’s been great at picking young talent – he’s only got one eye but it’s a good one. Verstappen, Sebastian Vettel, and Carlos Sainz Jr are products of that.

F1 is a really tough environment. Without Red Bull, these guys wouldn’t have a chance. On one hand, it’s tough but on the other hand, if they’re not cut out to deal with that pressure they’ll never cope with the pressure of a top flight F1 team.

Building a team around Max

What actually I’m referring to is within his engineering group with the people he’s working with. In the same way that Daniel Ricciardo has that confidence in the people around him in his garage and to make his feedback very clear in terms of what he wants from the car. Fortunately, the way the two drivers drive the car is very similar, their set-ups are very similar. It’s not like as a team we have a left or right to choose. What works for one 99 per cent of the time works for the other in how we progress the car. I feel that Max and Daniel represent our best ever pairing in Formula 1 and are currently, probably the best driver pairing on the grid. So it’s my priority to make sure we retain that, at least until 2020.

We got very close to signing Alonso. Helmut and I went to see his management at the end of 2008 for the ’09 and ’10 season and we offered him a two-year contract. He would only sign up for one year and we said Red Bull’s position was a two-year deal or nothing, and he wouldn’t commit to that. We thought he’d had a Ferrari contract very clearly for ’09. What was weird about that was that Flavio [Briatore] was involved as well, but he was trying to get him for Renault which he was managing at the time and in the end, he drove for Renault for 10 years. Halfway through ’09, I had an approach to say ‘could he join mid-season?’ because they thought he could win the championship in the car. Then he had another conversation in the back of an Alfa Romeo at Spa airport several years later in ’11 or ’12, and again it never really…the most serious discussion was the first one and then it missed its chance.

I think the frustration with that incident, if you look at it in isolation, was that he was off track but all weekend cars had been running off track. Valtteri Bottas was fighting with Daniel, ran off track at Turn 1 and came out ahead through Turn 2 and was able to defend it. My frustration was that it was inconsistent. I had that debate after the race and had the discussion with both the stewards and the technical delegate. What it came down to were two things. One, I think the rule is badly written, you’re putting too much pressure on the stewards to say ‘this is an advantage’ and ‘this isn’t an advantage’. We want close-quarter racing, that’s what the fans want and what F1 is about. ‘Use what you like on the circuit’ – and then we’re starting to penalise them.

If you don’t want the drivers to use those bits of the circuit, whether inside or outside, put a kerb there or a gravel trap or a runoff area. Now it comes down to ‘well the MotoGP guys don’t like it’. You don’t put rugby posts up at Wembley and say ‘can you use those for a football game because the rugby guys don’t like it’. It’s got to be bespoke for a Formula 1 event, and I think that’s the circuit’s responsibility to ensure that – they don’t run off track at Azerbaijan, Montreal or Suzuka.

I think a couple of seasons, such as 2011 and ’13, we’ve been competitive from the start of the year, but generally the trend over the last six or seven years is that the second half of the year has been more competitive for us. At the beginning of this year we had correlation issues between our simulation tools – primarily the wind tunnel and the CFD – the two weren’t giving the kind of results that we’ve become accustomed to relying on. It took a little while to understand and unpick that, but once it was done there was a clear direction to lock onto. There was a step at Barcelona but we’ve not only got to move forward, we’ve got to close the ground onto the opponents.

For next year, we’re trying to bring that process forward – albeit a week earlier – but that week should allow us to arrive at the new season better prepared.

I came back from the meeting in Paris and I have to say I was very encouraged with what I saw. For once the FIA and FOM were absolutely aligned in what their vision of an engine is for the future. The really encouraging thing for me, it wasn’t so much the specification. I would love to have a V10 or V12, a high screaming naturally aspirated engine. I’m a bit of a dinosaur like that but I accept that we live in a modern world and a V6 turbo engine has been elected. They’ve put a key amount of focus on several factors – one being the sound. It’s got to come back into F1, it’s part of the heritage, the makeup. The other is that for an independent team such as Red Bull is really encouraging is that they want to ensure as a customer you get absolute parity, not just on product but on electronics as well, so electrical settings will have to be homologated. So the FIA will have to say ‘like for like they’ll have to be the same as on a works car’.

The other thing is that there’ll be large elements of standardisation of certain components like turbos and perhaps prescriptive design. There’s going to be less variance between engine manufacturers. We have too big a spread at the moment and it puts too much pressure on the chassis side of things and I think the FIA has basically looked at the engine and said: one, it costs too much; two, it’s not delivering from an acoustic point of view; and three, it’s too much of a performance differentiator from the best to the worst and I think they’re really narrowing that gap. As an entrance, your biggest or bigger influence will be on chassis. Obviously, there’s a few engine or works thing that weren’t as happy with that outlay because that’s dumbing down one of the key elements of F1. But I think the drivers are the biggest importance, teams or chassis secondary, and the engine tertiary.