To no one’s great surprise the FIA’s financial regulations have become the latest Formula 1 battleground, and in typical style various teams have established entrenched positions and are not willing to budge.

Traditionally teams keep an eye what rivals are doing within the technical rules, and make it clear when they think that someone has pushed things a little too far. Now they eye every update that other teams bring and do a calculation of what it must have cost them, and thus what it adds to the overall budget for the year.

And in parallel to that there is an ongoing debate about the impact of inflation and rising freight costs on what teams are spending, with the big players lobbying hard for an increase.

The headline figure for this season is thus $140m, plus an extra $1.2m for a 22nd race, bringing the total to $141.2m. The regs also include a reference to busting the cap by up to 5%, a not insignificant $7m, being a “minor breach.” However there’s no clarity on what the penalty might be.

The big teams have faced a huge challenge in getting down to the cap, and they’ve done mainly by reining in development and either downsizing staff or re-deploying people to non-F1 projects.

However, inflation and ever rising costs have pushed things over the edge, and they are now scrambling to stay within the limit – and one area they can in theory still control is the development and manufacture of new parts.

Given that Red Bull and Ferrari are in a battle for the championship, and Mercedes is keen to join the fight, the three biggest players do not want to compromise the quest for performance.

The debate about a boost to the cap has been going on for several months, but some teams have refused to back the idea, notably Alpine and Alfa Romeo, and there is no solution so far.

After the Barcelona last weekend Red Bull boss Christian Horner suggested that up to seven teams could miss the last four races, so tight was it likely to be for them.

In citing missed races like that he was exaggerating for effect, and concerned that he had perhaps been taken a little too literally he clarified his position in Monaco on Saturday.

“I think what I was trying to point out last weekend was, it would be the equivalent of,” he said.

“We would have to miss numerous races to get anywhere near obviously getting costs under under the cap. And I think certainly all the major teams are going to breach that $140 cap this year.

“There’s a 5% threshold for a minor breach. What is the penalty for a minor breach? And what we don’t want to do is end up playing a game of chicken, to say, ‘Does he go to $4.9 over? Do we go to $4.7 over?’ Can that be one upgrade that could be the differentiating factor of this World Championship?

“I think what we do need is clarity, and clarity quickly. Because quite simply, it’s not right to be held to ransom by a couple of teams that aren’t perhaps affected. 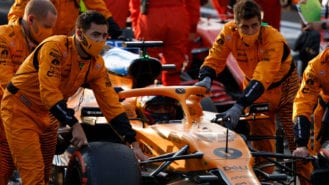 It’s not just Daniel Ricciardo and Lando Norris who had a new toy to play with today. As the two McLaren drivers got their first feel of this year’s car,…

“That was never the design of the budget cap. The budget cap was there to limit the top teams from from a spending frenzy. The budget cap figures, if you remember, were reduced by $30 million from where they originally set during the pandemic. Nobody could have even contemplated world events that are driving inflation.

“We don’t even know what that inflation is going to be in the second half of the year. We’re all seeing the cost of living rising, we’re seeing utility bills going through the roof, where is that going to go the next six months?

“So we do need the FIA to take early action on this. Because we’re coming up to the mid-year point. And there’s only so much you can do.”

Horner was keen to point out that his company has already done a lot to adjust to the cap.

“I think we have a responsibility to our employees as well,” he said. “We reorganised, we’ve reshaped, we had to say goodbye to many longtime employees through redundancies last year, to get down to a point that was consummate with the cap before inflation came along.

“And I don’t think it’s right that he pressure should be put on mass redundancies, you know within the sport.

“Hopefully common sense will prevail. It is a force majeure situation: none of us could have seen [the events] that have driven these costs up? And pragmatically, we just need to come to a common sense solution.”

Horner is not alone, and his views are mirrored by Ferrari boss Mattia Binotto.

“There is an unforeseen force majeure situation of inflation, which is so high, and no one was predicting it,” he said.

“But we could not have prepared ourselves for such a high inflation. So I’m pretty sure that all of us, and not only the top three teams, the big teams, will hit the budget cap very soon in the season.”

Binotto makes the obvious point that no one wants to see the World Championship impacted by a legal argument over money.

“I think it will be really a shame that a sport like F1 will be dictated by the budget cap. It has to remain a sporting and technical challenge. The budget cap and the financial regulations are certainly a very green regulations. It’s only the second year, and it will take many years to fine tune it.

“And I think because of that low maturity of the financial regulations wherever it is, where there will be no fairness or equity in the way we are interpreting it, I think it will be completely wrong that a budget cap is dictating the challenge on track.

“So I think the only thing we can do as F1 is increase the budget for inflation, which is something as I said, which we could never foresee.

“And I think that would be the right thing to avoid many discussions at the end of the year [that] maybe the team winning the championship was simply the one spending the most.”

Getting agreement of all the teams for a tweak to the budget cap has been a struggle. However, it’s not just the big three who back it.

“It isn’t in the interest of the sport to have teams having penalties because of financial issues,” says Aston Martin boss Mike Krack.

“And the reason why we support it is mainly because the increasing cost is real, inflation is not something that has been invented. So as long as the approach for inflation management in the regulation is reasonable, which it is, by the proposals, we will support it.”

That said, Krack believes it’s up to the teams to manage their spending efficiently, and if that means cutting back on development, so be it.

“And I think now it is still time to make the right choices. If you overspend now obviously then it will be tight later. We have very good cost monitoring. I think we are also quite efficient in terms of how we spend.

“We are not in a position where we would not make races. But we are also watching now what are we going to do for Monza, for these special races. You have you have to make these decisions.

“Before we decide a new, say, for example, a Monza package, or Monza wing, we know what this is costing us, and we know how much money we will have, if we make it. We have obviously some margin in for crashes, and stuff like that. I mean, if we repeat the Melbourne thing every weekend, then we will not do the Monza package!

“I think the cost cap should not just be increased, because some people are just not having having their costs under control. But as I said, if the cost, the situation in Russia or Ukraine drove the energy prices extremely high. Air freight rate is very high.

“And this you could not plan in any budget. So that’s also why we support an increase based on inflation, but not an increase per se.”

While Aston Martin supports a change to the cap limit, Alpine most definitely does not, as team principal Otmar Szafnauer has made clear.

“We’re not in favour of that,” says the American. “We’ve set our budgets out early, we kind of anticipated a little bit of the inflation, inflation just didn’t creep up on us. If you look back in December, the RPI was already at 7%. And most teams do their budgets between November and December for the following year.

“For us, it wasn’t a surprise. So therefore, we planned for it, we’re still under the cap, even though we didn’t plan for as high a freight cost as we are now experiencing. But we’re still under, and if we can do it, for sure others can do it too. So I’m not for just increasing the cap.”

“There’s a significant amount of money in the development budget for a year,” he says. “Especially in a year where the regulations are all new, you put in a lot of money for development, because ultimately this year is a development race.

“So it’s a lot easier if you have the money to go to the FIA and lobby to raise the cap and keep your development budget the same. So those are the questions you should be asking.”

As long as some teams oppose any boost to the cap, this saga is set to run and run. It remains to be seen what happens later in the year as teams inevitably tip over it.