Following Friday’s running around the Jeddah Corniche Circuit, the picture is beginning to form and things are looking a little bit familiar at the front.

Ferrari and Red Bull can hardly be separated and despite Charles Leclerc’s FP2-topping time, the gaps between the teams is on a knife edge.

The fight for pole position could be split by thousandths of a second between the Red Bulls and Ferraris but there are more close battles behind.

Mercedes still hasn’t sorted out its bouncing issues as a result of the porpoising while Alpine and AlphaTauri look set to go head to head for ‘best of the rest’ honours in qualifying.

Through analysing the most representative laps and stints during FP2, we can begin to see the picture forming ahead of the Saudi Arabian Grand Prix. 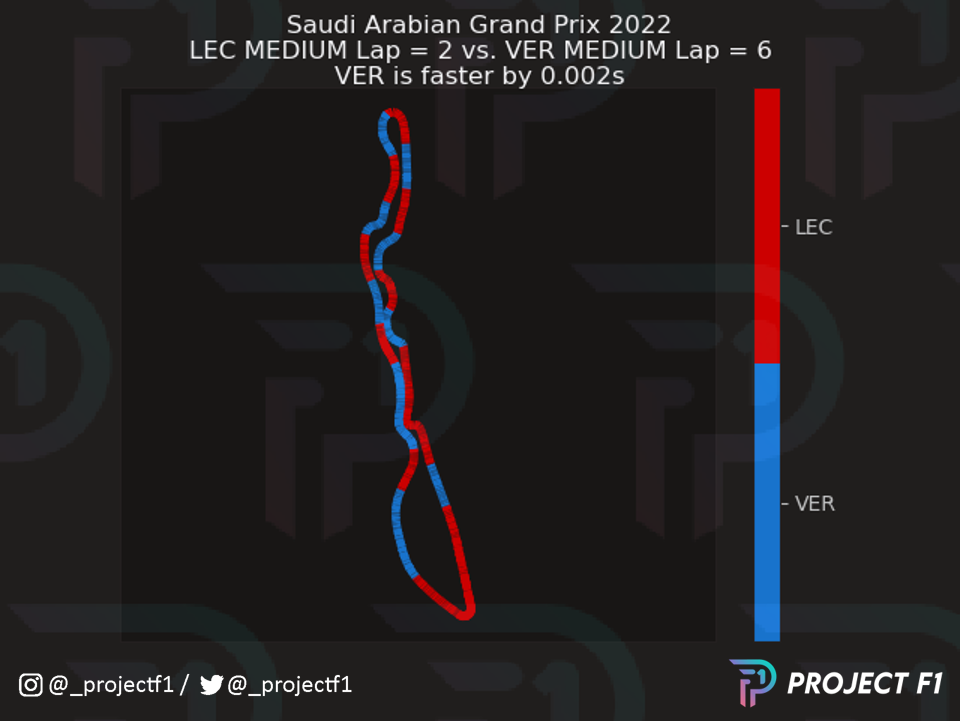 Red Bull is looking strong once again. Both Max Verstappen and Sergio Perez had solid averages and medians on the medium tyre with relatively tight ranges on the stints.

There is no ideal data for Ferrari given traffic issues and excursions into the wall. While the team might have been hiding pace in Bahrain, it is harder to say that with certainty here. Short runs – discussed later – show that it is still competitive with Red Bull.

Mercedes continues to be some way off the pace of the front runners. Some slower laps impact the average, though the median pace is still not fantastic relative to Red Bull. It’s worth noting that Mercedes’ sims were longer but whether that is enough to account for the full deficit is uncertain. What is certain is that the team is still facing issues with porpoising. None of the remedies trialled on Friday appears to have solved the issues facing the W13, with both drivers reporting the bouncing continuing to be a problem in Jeddah. 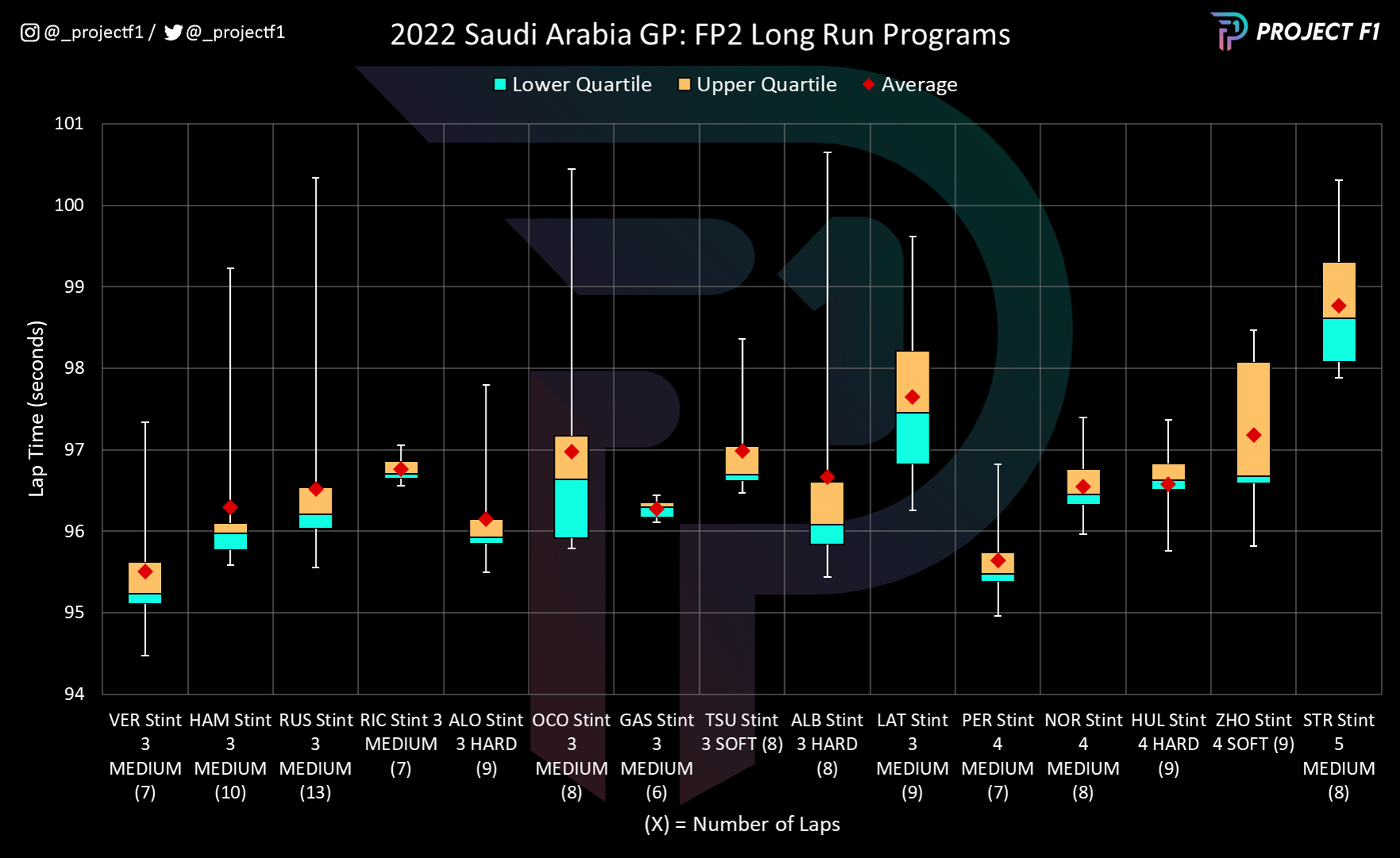 Alpine and AlphaTauri are seemingly looking strong and appear to have pretty strong pace. This is especially the case with Fernando Alonso who had great median pace on the hard tyre. Pierre Gasly also had good results, especially given the very tight range with his laps evidenced above.

It’s hard to know where Alfa Romeo stands amongst the rest given there was no hard tyre sim from Valtteri Bottas or Zhou Guanyu, who both instead opted for a longer sim on the soft tyre. Regardless, they will remain ones to watch.

No data on Haas, though Kevin Magnussen’s issues with reliability will be raising some concerns in the garage. It was also a mixed bag for Aston Martin, with Nico Hülkenberg and Lance Stroll having vastly different outcomes on long run pace. This is likely down to the fact that both were running very different practice programmes as the team looks to better understand the behaviour of the car. A similar thing can be said for Williams.

McLaren is looking better this weekend, particularly in the hands of Lando Norris. However it’s still too early to say whether this is a real improvement given the woeful performance durng the last outing in Bahrain. 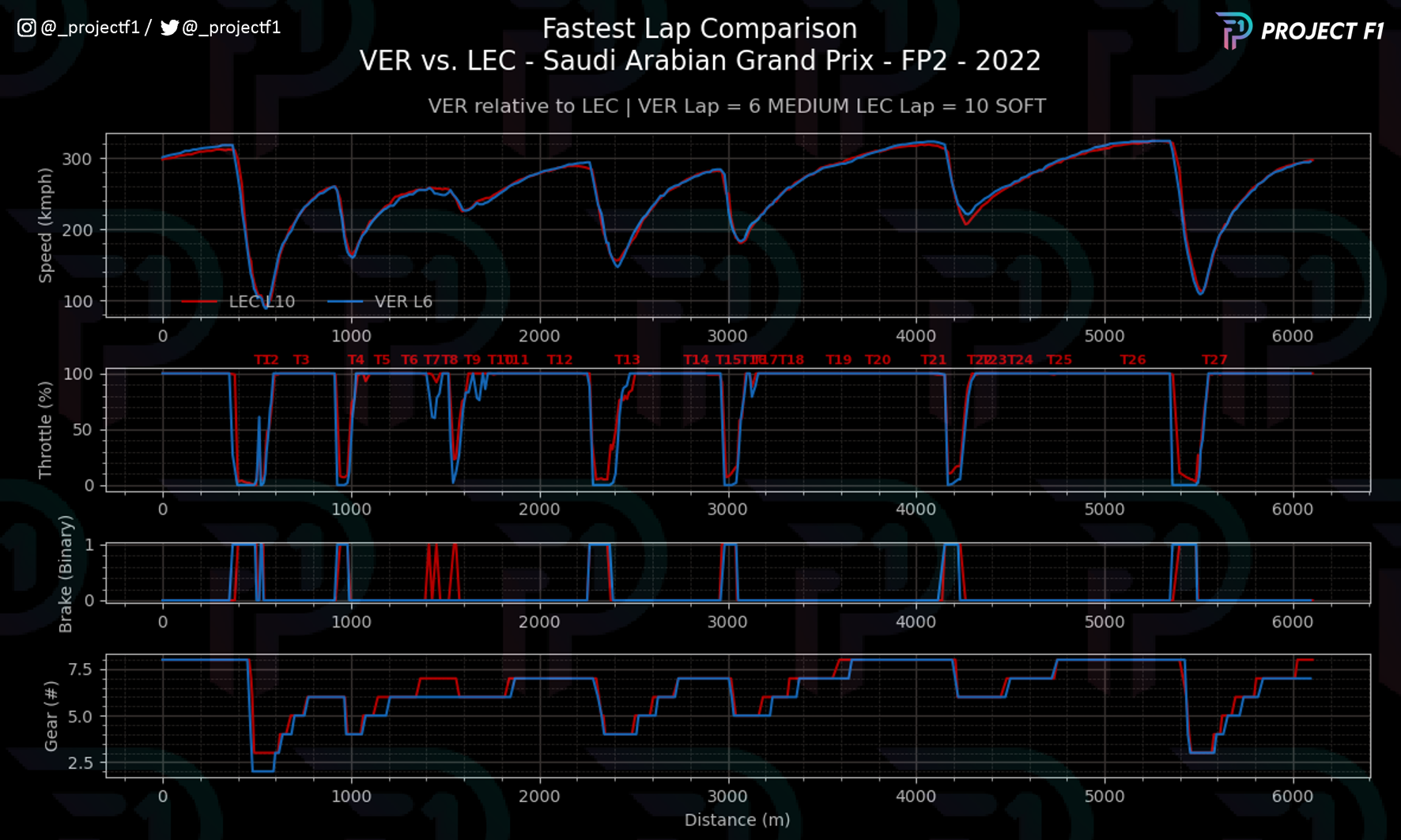 Though with no representative run from Red Bull on the soft tyre, it’s hard to say for sure who has the prowess in the high speed corners – especially in sector 1. At the same time, it’s hard to say exactly where Ferrari is on power, given uncertainty of engine modes used in free practice. 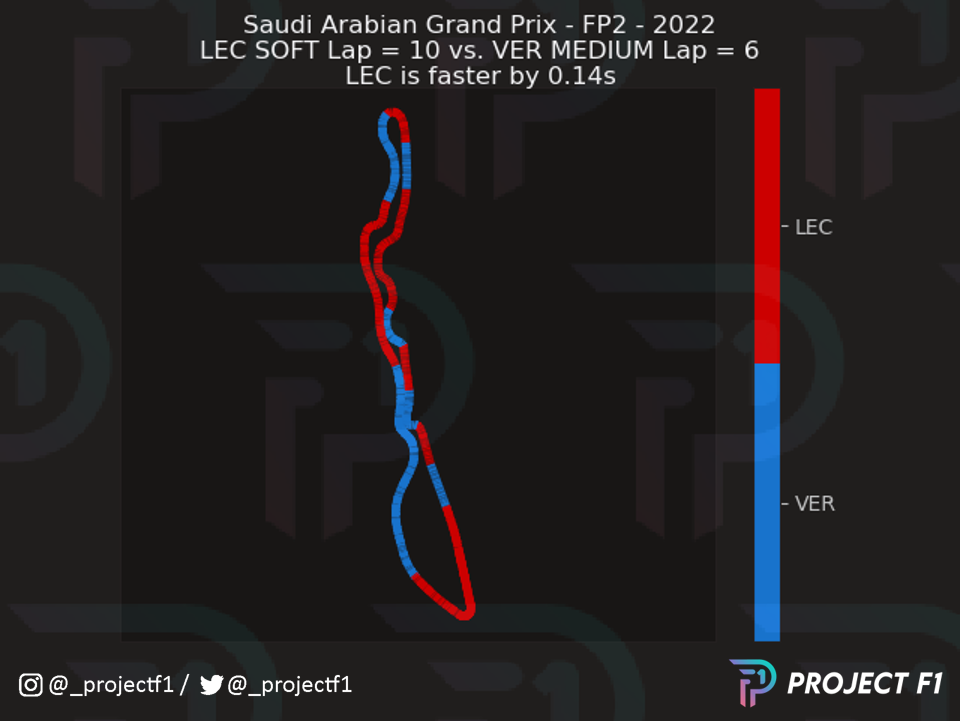 Both Leclerc and Sainz tapped the barriers during FP2 which cost the team track time. Might that make the difference in the end and open the door to a Red Bull pole?