The Australian Grand Prix is no stranger to uncertainty but at least in 2003, it was all on the track.

After a fairly comprehensive Michael Schumacher/Ferrari whitewash in 2002, a raft of rule changes were brought to spice up the action the following year.

Perhaps the most significant of these was the introduction of one-lap qualifying, with competitors being given a single shot at securing their grid place.

As the F1 circus rolled up for the first race of the season, the hope was that this, along with a new points system, changes to testing regulations, and a grid of new cars would herald a new dawn of exciting grand prix racing.

Disappointingly for some, several teams took a conservative approach in qualifying and it was Herr Schumacher on pole once again.

So was it new rules, same story? Not quite.

In a lacklustre 2002 F1 season, the Belgian Grand Prix stood out as Michael Schumacher, at his Spa-Francorchamps fiefdom, put on a stunning demonstration Victory for Schumacher Photo: Motorsport Images…

Clouds rolled in and, once again, the weather showed its ability to tear up the script on race day.

With intermittent showers in the morning leaving the track mildly damp, most of the field decided to start on intermediate tyres.

However, fortune favours the brave (most of the time) and after the formation lap, McLaren’s Kimi Räikkönen took the decision to take on dry rubber and start from the pitlane.

After one lap, things were not looking promising for most of the field; still using the previous year’s car, the two Ferraris were already 6sec ahead of the rest.

All (non-Italian) F1 fans were strapping themselves in for another snore-fest of a season, then things took a strange turn.

First of all, it was spotted that Rubens Barrichello had jumped the start, presumably seeing it as the only way he was ever going to beat Schumacher (although he still went into the first corner second). 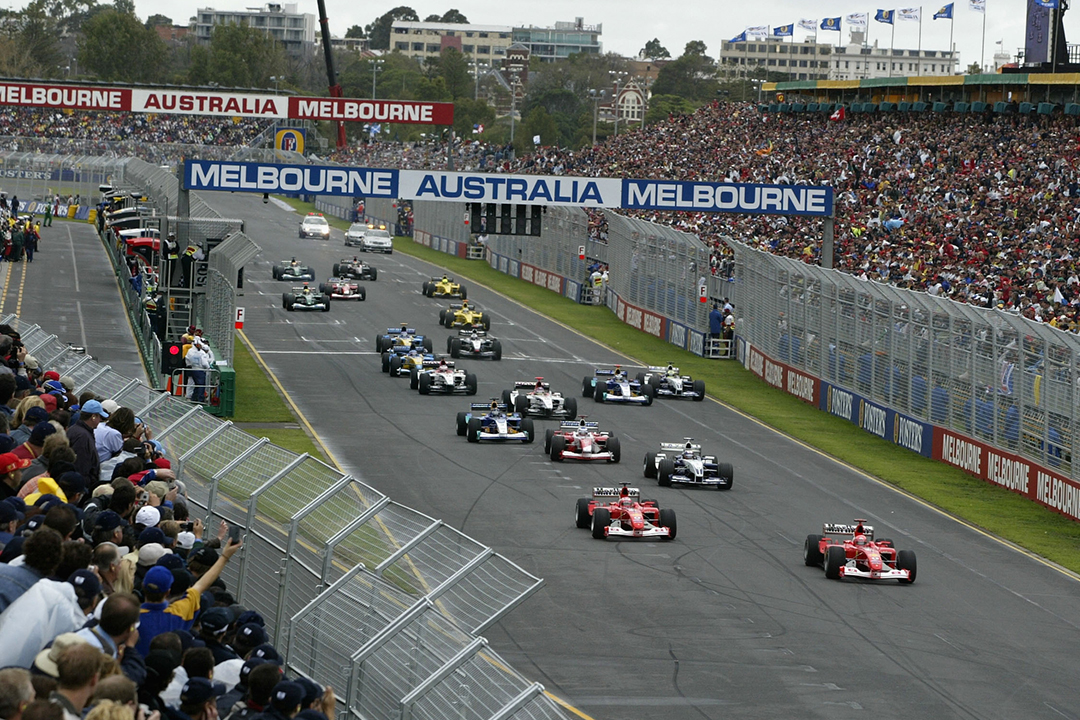 Schumacher led into the first corner, despite Barrichello’s false start

The Brazilian was given a penalty. In protest, Rubens proceeded to lose control of his Ferrari and ram the barrier at Turn Five, writing off the car and ending his race.
The resulting safety car prompted the rest of the field to pit, comprehensively shaking up the order.

Williams’ Juan-Pablo Montoya now led the two Renaults of Jarno Trulli and Fernando Alonso. Mark Webber’s Jaguar, followed by Räikkönen, who had been scything his way through the field, were close behind.

As the green flag waved, the excitement was all a bit too much for Webber’s Jaguar, the rear suspension collapsing to bring out another safety car.

After running a promising fourth and fifth, Villeneuve then took an executive decision to implode his own team’s race. In a move of typical charity, the French-Canadian stopped a lap later than planned, leaving team-mate Jenson Button to queue behind him in the pits, thus stymieing any threat from the Brit.

Ferrari decided this was the moment to pit Schumacher again and Räikkönen shortly followed suit, leaving Montoya in the lead for a second time. 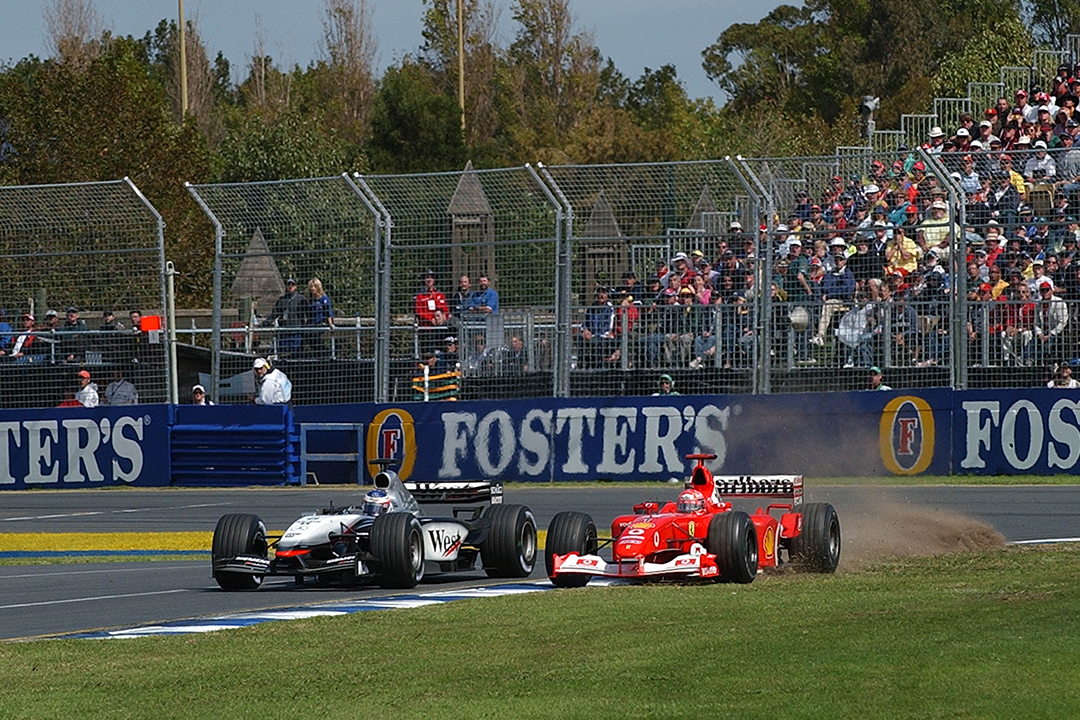 The Scuderia driver found himself behind the Finn, but soon closed in looking to effect a pass.

Things came to a head as the two squared up at Turn One, Räikkönen shoving Schumacher onto the grass.

Despite his efforts on the behalf of all non-Ferrari fans, the McLaren driver was handed a drive through penalty for speeding in the pit-lane.

Montoya then pitted to leave Schumacher first once again, but not for long.

The effects of exploring the scenery at Albert Park had taken their toll and one of the German’s bargeboards emancipated itself from the Ferrari; the world champion was obliged to stop and have his car checked. 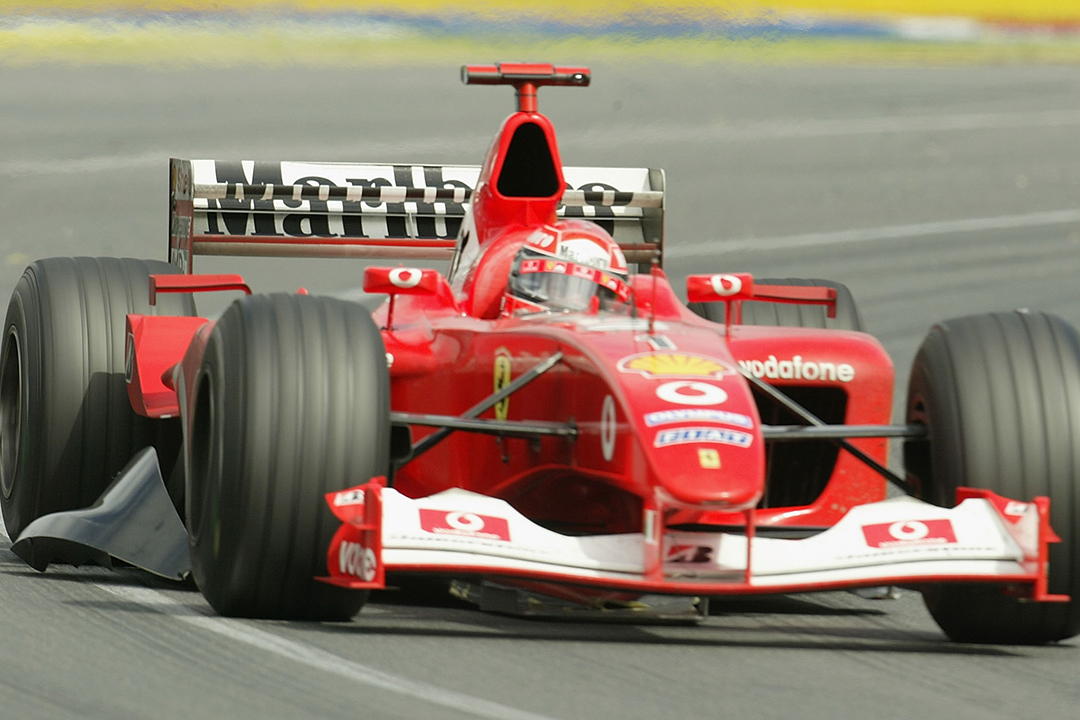 Trailing bargeboard forced Schumacher to pit from the lead

Montoya was back in the lead, the Columbian driver now having a (theoretically) clear run at securing his second ever grand prix win.

However, Juan-Pablo – never one for predictability – surprised everyone by performing his victory donut eight laps early, reversing his Williams into the barriers with a rare deftness of touch that left his car undamaged.

The result was that, for the first time in the race, McLaren’s David Coulthard now led.

Things went from bad to worse for Montoya as a resurgent Räikkönen began to put him under pressure for second. Not far behind was Schumacher who now, having shed various bits of his car, seemed to be going even faster. 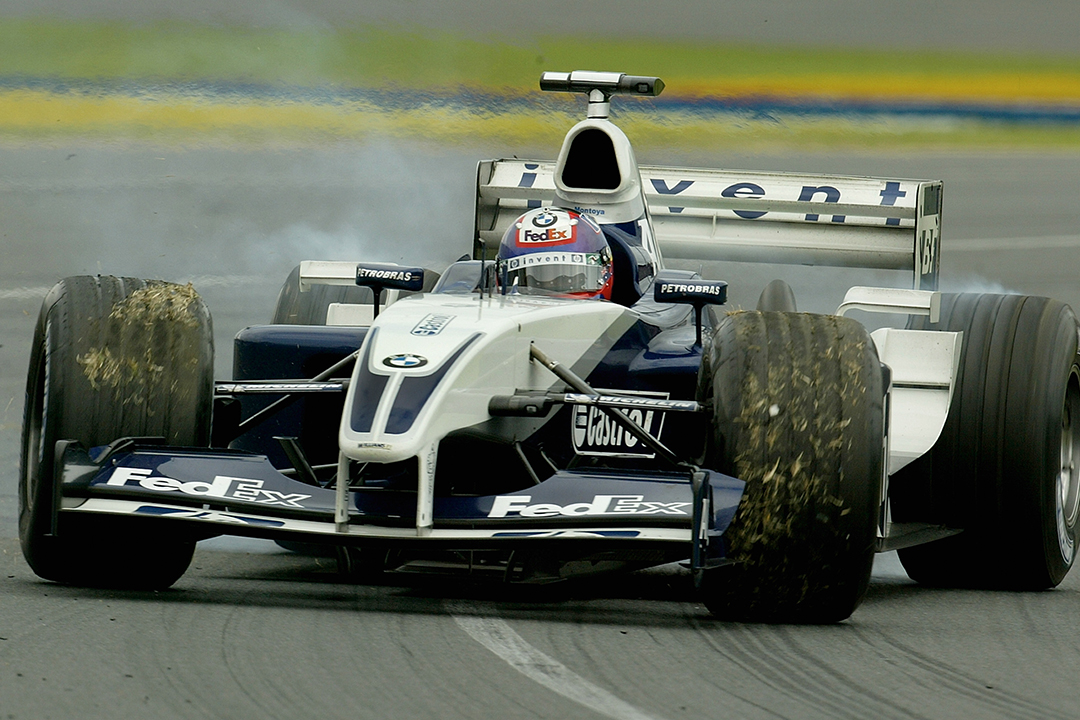 Montoya’s spin from a comfortable lead

In a race so far lacking in any consistency, the order stayed the same for the remaining few laps.

Coulthard trundled home to take his 13th (and final) F1 win whilst Montoya came home second, ahead of Räikkönen and Schumacher.

The 2003 Australian Grand Prix had witnessed a race of seven lead changes across four drivers, a fair few prangs and five different cars in the top six.

F1 hadn’t had this much fun since the 90s. The season went on to provide even more entertainment, with eight different winners and a title battle which down to the wire.

Some things never change though. Schumacher, after being pushed all the way by Räikkönen, went on to be crowned F1 champ again, winning by just two points.