The full trailer for Netflix’s Drive to Survive Season 3 has been released, offering more detail on what will feature in the latest series of the Formula 1 documentary.

Among the footage are behind-the-scenes shots at Ferrari during a season where the team fell back into the midfield.

During a team debrief, the drivers are told: “We can’t be too funny considering the performance.”

There’s more intrigue from Sebastian Vettel who says: “I’m leaving at the end of the year so I can say what I want, you know?”

We’re left waiting for the full series to see whether the new Aston Martin driver delivers on that statement.

He’s also shown next to Charles Leclerc and having a kick around in the paddock – benefitting from the extra space created by social distancing. 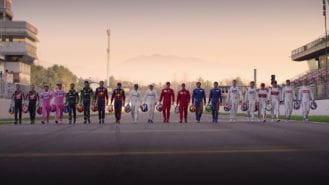 Season 3 of Netflix’s immensely popular series Drive to Survive has landed. Editing is complete with the full trailer and series now finally released. Below we have the full rundown…

Filming was able to continue throughout the season thanks to special measures to prevent the spread of Covid, including long microphone booms and film crews in bubbles.

Long-term fans of the series need not fear: sweary Haas boss Gunther Steiner is back and likely to be more animated than ever, given the dismal form of the American team.

“The target for this season is to survive,” says Steiner, which is likely to have been recorded ahead of Romain Grosjean’s fiery crash.

The trailer features scenes from the Bahrain fireball and clips of a joint interview with him and his wife, Marion Jolles.

There are also shots of Lando Norris and Carlos Sainz’s paddock banter, and Valtteri Bottas at home chopping firewood.

As ever, the unique behind-the-scenes insight is set to be interspersed with plenty of dramatic action and crash footage, as evidenced by a high-octane montage in the trailer.

The documentary looks to have captured the moment in Sochi where the Mercedes pitwall hears that Lewis Hamilton has been penalised for his practice starts in the pitlane.

The full series will be released on Netflix on March 19