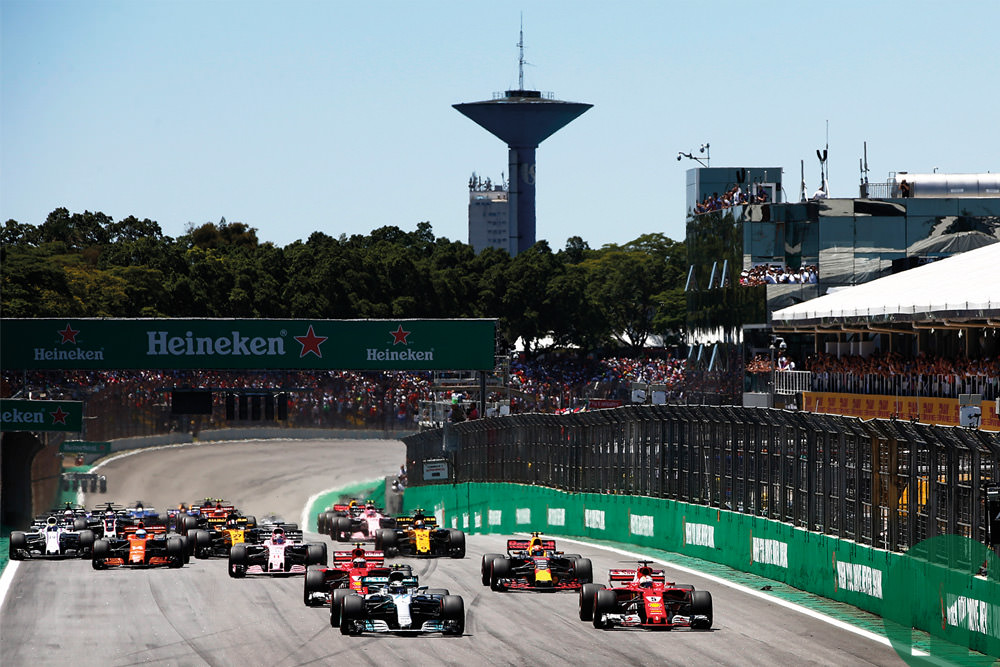 It was a bit of a strange trip, to be honest. There was a lot of tension in the Interlagos paddock given the security issues happening outside the circuit. We were very fortunate that none of our friends at Mercedes, Pirelli, Williams and the FIA were hurt, although some had their belongings taken away. It was generally a tense atmosphere, even before we talk about stuff on track.

There were a couple of stand-out performances, but Sebastian Vettel ultimately did what he does best. Once he gets into the lead of a Grand Prix he very rarely relinquishes it or makes a mistake – Austin this year comes to mind as a rare exception.

Think of all those wins he racked up with Red Bull when he’d get in front, break the DRS and then just disappear into the distance, that’s kind of what he did in Brazil. He’s very good at doing it. Mercedes tried to create an opportunity for Valtteri Bottas around the pitstops but they were never really close enough. I think 1.9sec was the gap, that’s why we heard Tony Ross on the radio to him saying ‘look, try and close it down’ and he just didn’t have enough pace to do it. That’s disappointing from their side because Lewis displayed some amazing pace, but before we offer any criticism towards Valtteri we have to bear in mind that Lewis had a new power unit.

The new engine allowed him to run the higher power mode for a lot of the Grand Prix and that really contributed to his pace. We saw Valtteri having to manage his, a bit like the Ferrari guys, but even so he would have hoped to get a bit closer to Seb to make that undercut work. But it didn’t work out.

It was status quo at the front but the pace was strong. The guys were pushing really hard and there was very low tyre degradation, although there was a little bit of blistering. The low wear meant they could push hard for a lot of the Grand Prix, which also meant it was quite physical for the drivers.

Lewis made perhaps the most shocking mistake we’ve seen from him in a very long time. I’m trying to think of the last time we saw him make a mistake and crash like that, or in fact saw any of the championship contenders do that, especially on the first lap of qualifying. That’s normally a phase when the top three teams can cruise around, often on the harder tyre, and simply get through to Q2. Obviously the car was tricky to drive and the track is bumpy – Interlagos is an old-school circuit, which I love; it is great to see big kerbs, grass on the edge of the circuit, bumps and the drivers really having to earn their money. You could see as Lewis climbed the hill to Ferradura, turn six and seven, the back of the car was just bobbing around a little bit and when he turned in it just went away from him. He had no chance to catch it at that speed. It was a shock to see.

But then, on Sunday, I thought he was just stellar. There was one stand-out moment for me, or phase, which was when the two Ferraris and Bottas pitted. Lewis was still out on the softs and he somehow, on tyres that had done 29 laps, was doing the same lap times as Valtteri. As a driver, you’re managing the race all the way through, but to think ‘I need to have enough rubber to attack at this phase because it’s going to win me track position compared to other people’ takes a great amount of discipline in the first part of the race in traffic. Then he unleashed that performance to jump the Red Bulls, he passed Max on track in the end, but that was a really important phase in the Grand Prix in the clear air to win that lap time.

You could see once again that, when the Mercs got behind the Ferraris, they struggle to follow. That’s what it comes back to when people say Valtteri could have done more to win the race. When he was behind the Ferrari, he just didn’t have the pace to stay close enough to get in the DRS.

The same happened to Lewis behind Kimi, despite the new engine. He couldn’t quite do enough to attack, but Kimi also did a good job to manage his energy and battery power at critical points – namely turn 12 up to the start/finish line. Kimi had to think about it, but he didn’t really seem to be under attack. I don’t think Lewis really got close enough.

It was a sub-par weekend for Red Bull. They just didn’t seem to have the performance. Christian Horner said to me that it was because they didn’t have the straight-line speed. There’s a lot of uphill climbs at Interlagos, out of turn four and out of 12, and he felt they just didn’t have the grunt. Watching from the outside it’s easy to be confused as to how Max can win the Grand Prix in Mexico by more than 20 seconds and then be nowhere in Brazil. They put it down to power and straight-line speed, so we’ll see.

Abu Dhabi could be difficult for them because there are two long straights, and even between them there are a couple of shorter ones such as the start/finish straight. The run through turns two and three should be easy flat in the 2017 cars, too, so it could be tough for them next time.

Felipe Massa did a really good job, he’s always very, very good at Interlagos. True to form, he was very competitive right from first free practice. I went trackside for FP1 and it was nice to see in some of the high-speed corners that Felipe looked really committed and he carried that form to the GP. He beat Fernando, he held off Pérez; it was a really strong performance. He was really happy and should be very proud of that last Interlagos outing.

It wasn’t the most exciting Grand Prix, though. We had a bunch of activity at the start, a bit towards the end, and in the middle it settled down. We just had to watch Lewis and Ricciardo come through. It’s usually one of the most dramatic venues on the calendar – six championships have been settled there – but a little bit of fizz had gone out of it.