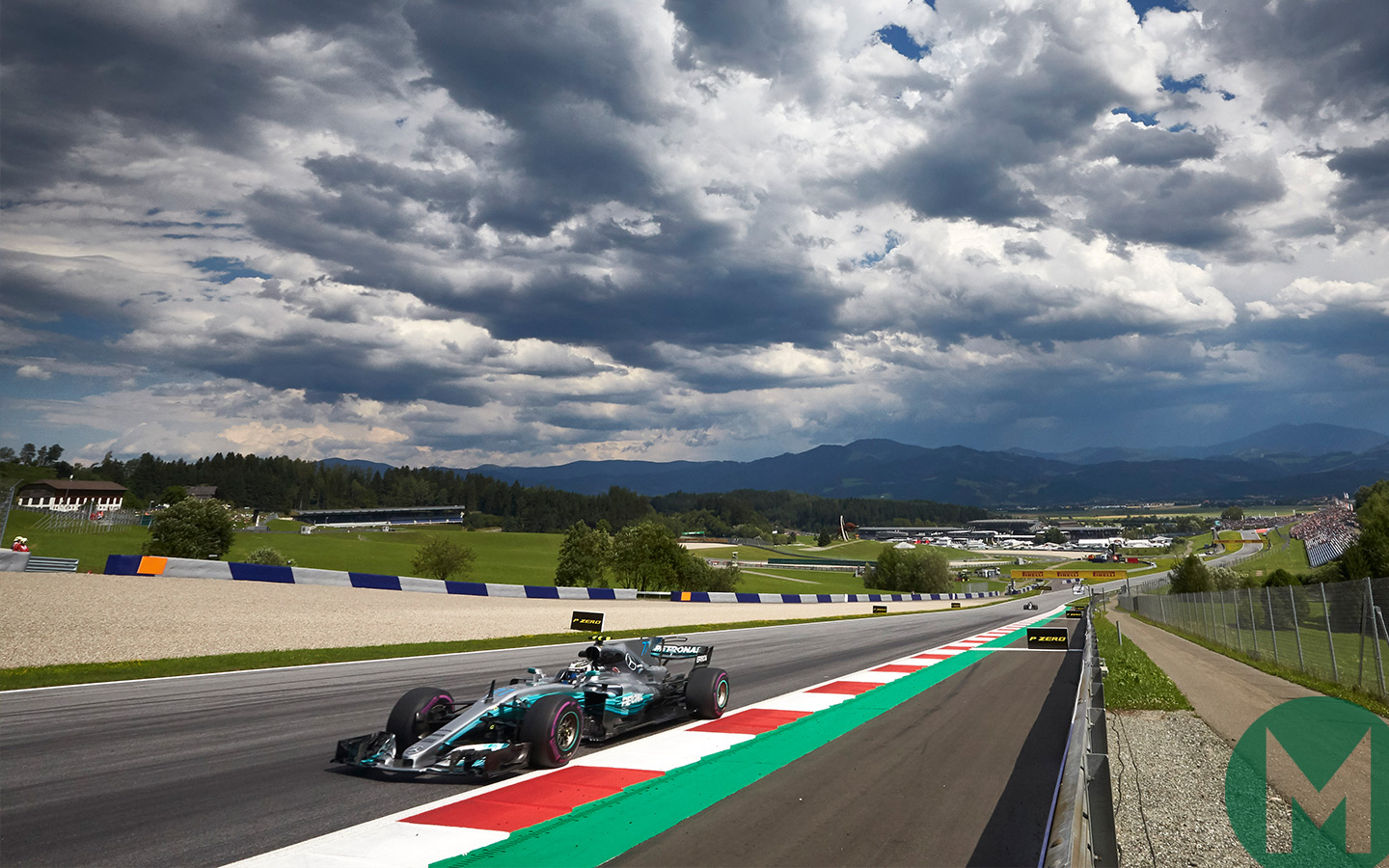 I’ll be honest, that was not the most exciting race in the world. Probably two laps of excitement at the top, four laps at the end and a lot of nothing in between. But sometimes you do get those races and it’s an odd one, because the Red Bull Ring circuit should promote lots of overtaking and good racing. I think the reason is because it’s quite a short lap and the field is quite tightly bunched in terms of lap time, so you don’t see the big overtaking moves and the gaps that you’d perhaps expect to see.

Before we go into the weekend, I ought to talk about Thursday. We arrived in Austria and there was such a lot of tension after the hearing into Sebastian Vettel’s move in Baku; there was a lot of tension in the paddock between Vettel and Lewis, Mercedes and Ferrari. The Dutch fans were out in force filling the campsites and the Max Verstappen grandstands and it makes for a really good atmosphere. For the public who come to watch and the fans who are in the grandstands it’s a great venue, because you can see so much sitting in one space. Going up to the commentary box, which is behind the main grandstand, you could see the atmosphere there – it’s absolutely packed.

Valtteri Bottas has to be top of my talking points. I thought he did a stellar job, especially in qualifying. When you look at the laptime comparison between Ferrari and Mercedes, it looked like Ferrari actually had more downforce and was quicker in the corners. The Mercedes pulled it back particularly in the second half of the straight and Valtteri got a bit of a slipstream which I think helped him on his pole lap. There were lots of small factors that contributed to him getting pole and Mercedes is clearly very strong when it comes to turning up the engines and getting peak power for that last part of qualifying. I don’t think Ferrari is quite there yet. Combined with a slipstream it was a very, very strong lap from Valtteri that allowed him to get pole position.

It was surprising to see Lewis not really able to do the lap. Lewis knew from Tuesday or Wednesday that his penalty was coming. Mercedes decided to wait until Friday night to announce it to the rest of the world, but he knew about it and he almost seemed a bit deflated and demotivated when it came to qualifying. He didn’t seem to be the Lewis that we saw in Baku and Canada, where he bounced into qualifying and really went for pole position. Here he was okay – he got third, which became eighth with the penalty, so a little bit of a sub-par qualifying.

In the race he was great. Coming from eighth up to fourth was a good strong performance, but I think he’ll be a little bit disappointed. If he started sixth, he may have had a better chance of getting past Ricciardo. In the end he was probably a lap or two away from getting Ricciardo and those points could be crucial at the end of the world championship fight.

Vettel and Ferrari – it was damage limitation I suppose. It was all because in the first stint Valtteri just destroyed him, disappearing seven seconds up the road and it looked like Sebastian and Ferrari had no chance to compete against him. But in the second stint Valtteri started to get blistering on his tyres and those of you on Twitter would have seen the picture I posted of Valtteri’s car underneath the podium with a band of blistering around the rear-left. So I think he did really well to hang onto that and to get the performance he needed at key points of the lap to make sure he kept ahead of Sebastian. Sebastian said it was very reminiscent of the last couple of laps in Russia, where he felt he needed two more laps to get the move done. 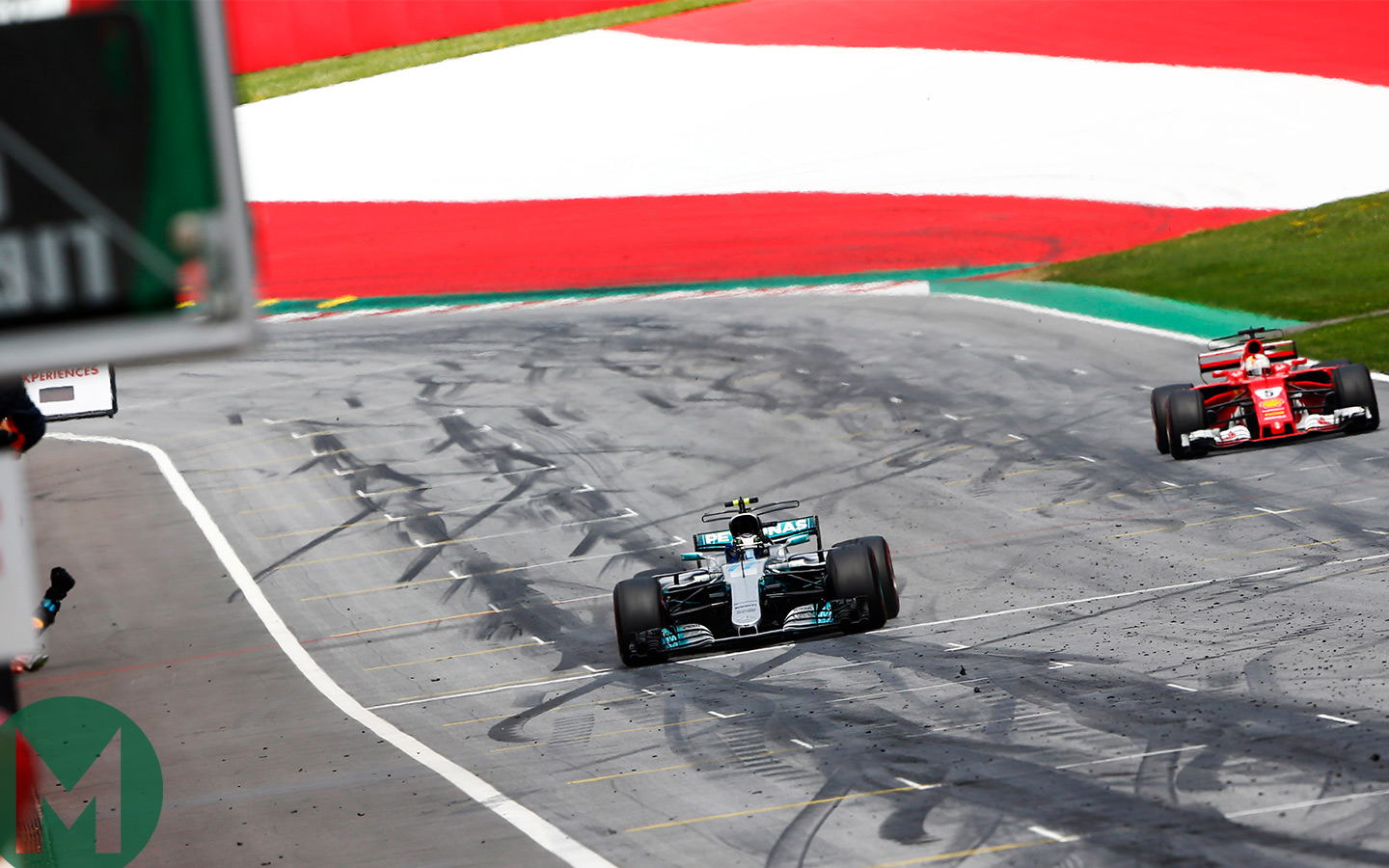 Let’s talk about Red Bull. I thought that was the team’s most convincing performance in a normal dry race. To finish within six seconds of the winner was a fantastic effort. Yes, Valtteri had tyre trouble, but Seb was also there and it was on a circuit that doesn’t favour its car’s performance.

I think Red Bull was very happy. I spoke to Christian Horner and to Daniel’s race engineer Simon Rennie and they were both very buoyant about the result and almost pleasantly surprised with how competitive they were. On Friday and in qualifying they didn’t quite look like they were there but it went well for them on race day, unlike the other side of the garage. Max Verstappen seems to be the new Mr Lucky! I always thought it was Jolyon Palmer who kept on having trouble in free practice, but it all goes wrong for Max on race day doesn’t it?

Canada, Baku and now here: that’s three races with arguably 40 points gone out the window for Max. I can see why he was massively disappointed once again. It will come good for him, because he’s driving amazingly well. All through the weekend he looked stronger than Daniel and his qualifyings have been strong as well as his free practice pace. Every time he gets in the car he’s just on it. Red Bull loves that about him and I can see why, he’s one of those once in a generation talents that comes to Formula 1, no question about it.

It was a good race for Force India with both cars in the points. I think Pérez did a very good job, as he looked on the back foot in practice but dug it out in qualifying and the race and got a long way ahead of Ocon. I think Ocon is very good, I really rate him highly, so for Pérez to remind the team that he’s a top-class act was a good effort by him.

Williams got two cars into the points with a little bit of luck involved, but once you look at the race pace, it wasn’t so bad. That begs the question as to why they were so far away in qualifying. Seventeenth and 18th on the grid was really not good and they were completely confused as to where their performance had gone. But come the race, Massa’s pace relative to Ocon wasn’t too bad and he went within a few seconds of him. They’ll definitely be doing some proper investigative work into why they couldn’t switch the tyres on in qualifying, because they just couldn’t get the tyres to work underneath the car which was a bit frustrating.

Onto Silverstone next for the British Grand Prix. There’s going to be a lot of intrigue because this is the first true high-speed circuit that we’re coming to since Barcelona. Ferrari looked amazing in the high-speed corners in Austria and I wonder if Mercedes is going to sneak in a bit more downforce or bring updates. We’re constantly seeing bits and pieces coming to those cars; they’re pushing hard.

Twenty points is the gap in the world championship now between Seb and Lewis and I’m sure Lewis will be massively motivated to get a win on home soil here in front of the fans at Silverstone. It’s always a great event and a busy one for us working with Channel 4. The weather has been amazing in the UK so far, so hopefully that will hold and it should be a fantastic weekend.