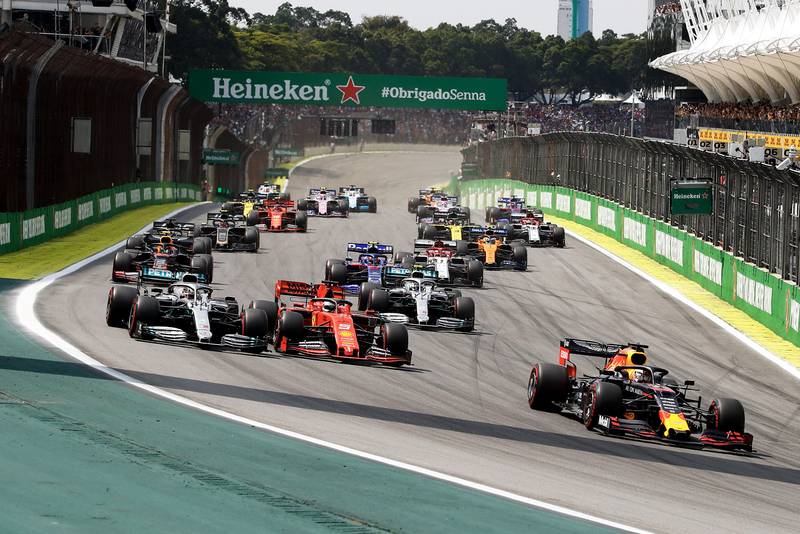 A late safety car turned the Brazilian Grand Prix into an explosive, thrilling sprint race that saw a Ferrari implosion as both cars touched; tactical and driving errors for Lewis Hamilton; six cars in a podium place at some point over the last 11 laps; and Pierre Gasly spraying champagne from the second step of the podium.

The drama continued after the race, as Lewis Hamilton was penalised for a collision with Alex Albon, dropping him from third to seventh place.

The race had looked set to finish as it started, with Max Verstappen leading Hamilton from Sebastian Vettel — as they had lined up on the grid. And then came lap 52 when Valtteri Bottas pulled to the side of the track with engine failure.

It prompted a safety car period to recover the Mercedes and Verstappen dived into the pits, with Hamilton staying out.

Now Hamilton was in the lead, followed by the fresh-tyred Verstappen, Vettel and Alex Albon. Charles Leclerc was fifth, having stopped for new tyres too. Seemingly irrelevant, Gasly was sixth. 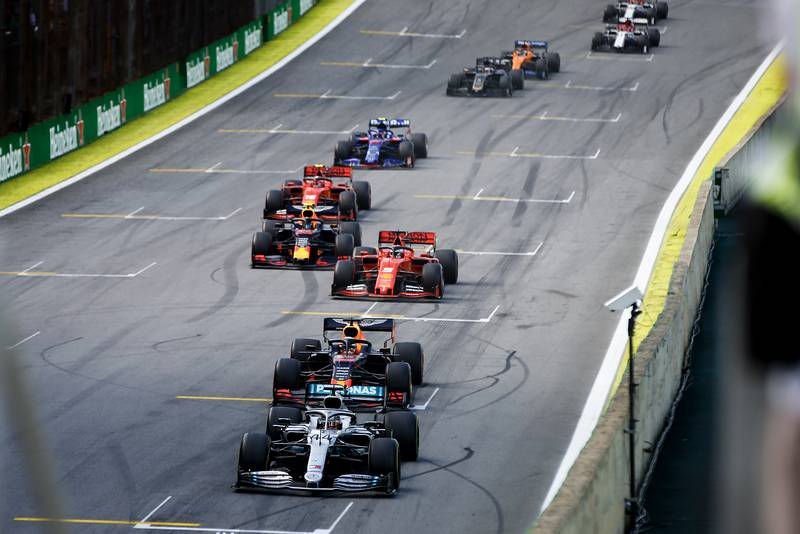 Hamilton leads (but not for long) at the first safety car restart Photo: Motorsport Images

The safety car pulled in at the end of lap 59, with 11 laps of racing left for the compressed field.

All of Hamilton’s guile at the restart couldn’t keep Verstappen at bay; his fresh soft tyres providing the confidence and grip to take the lead on the outside of Turn One as soon as racing resumed.

Within a few corners, the World Champion had slipped into a battle for second with Albon, Vettel and a charging Leclerc.

By lap 66, Leclerc was alongside Vettel and past in Turn One, but the German came back on the straight after Turn Three, slipstreaming past on the right.

Vettel then edged left towards Leclerc and his left rear wheel brushed the right front of his team-mate. For a split-second it seemed innocuous, then Leclerc’s tyre burst off the rim and Vettel’s disintegrated.

The radio waves were filled with fury and the track covered in debris, triggering a second safety car. Hamilton pitted, which dropped him to fourth — behind Verstappen, Albon and Gasly. It was a dubious tactic, with few racing laps remaining — and the possibility of the race not resuming at all.

As it happened, there were just two laps remaining when the race restarted. A charging Hamilton shot past Gasly with both Red Bulls in his sights, but punted Albon off the track after going for a gap halfway through the lap.

Albon dropped down the classification, and Hamilton was re-passed by Gasly. The pair crossed the line virtually side by side, but the ecstatic Frenchman just held on for second.

Hamilton apologised for the contact as soon as the race ended, and stood on the third step of the podium, but has now been handed a five-second penalty, dropping him to seventh place.

This promotes Carlos Sainz to third; a remarkable result for the McLaren driver who started last.

In comparison to the final laps, there was little drama in the majority of the race where Verstappen looked in control, despite Mercedes’ efforts to catapult Hamilton into the lead — which only happened briefly. 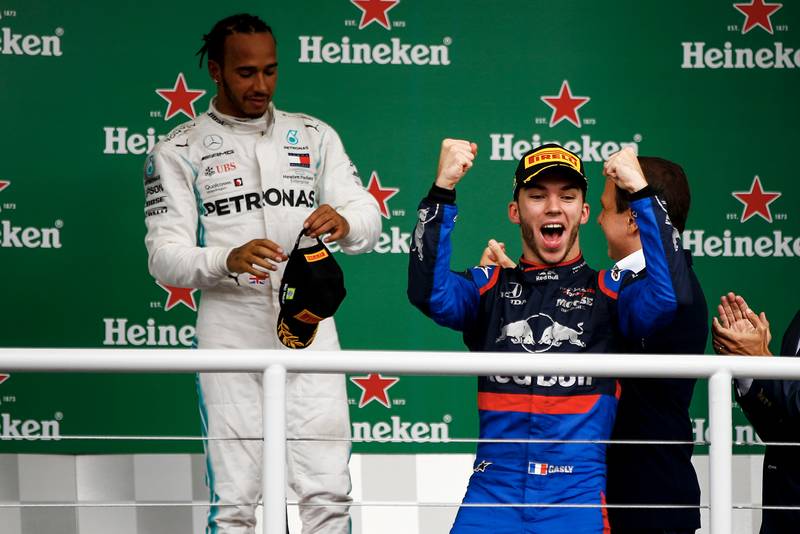 A euphoric Pierre Gasly on the podium Photo: Motorsport Images