The third in a series of extracts from Inside Track: Phil Hill with Doug Nye. Phil Hill on photographing the start of the 1955 Le Mans 24 Hours – a race that would live in racing memory for all the wrong reasons… 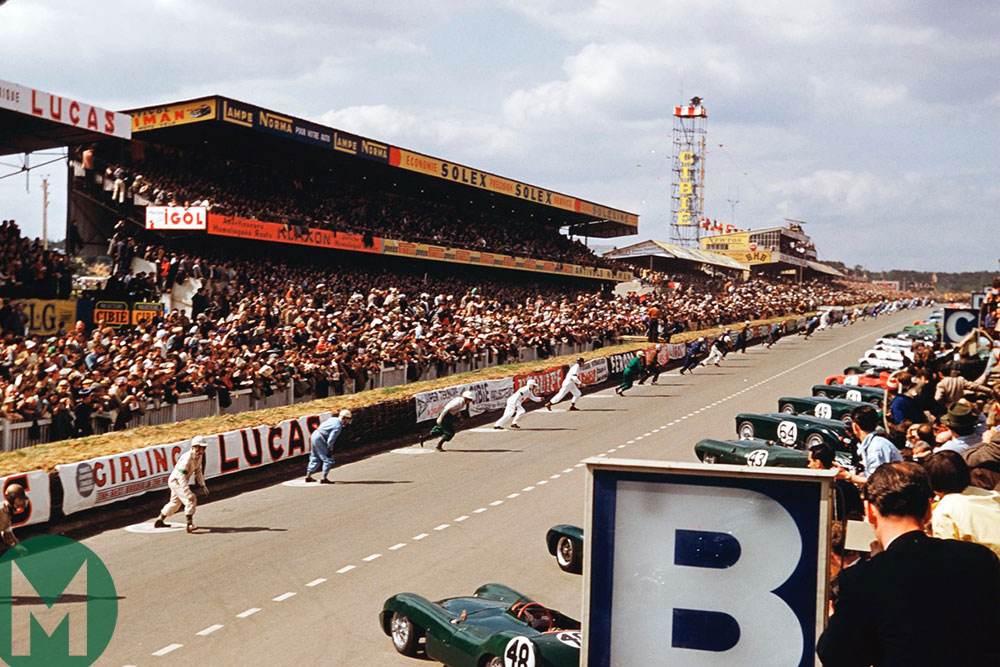 1955 Le Mans 24-Hour race –Three-time Le Mans winner Phil Hill photographed the dramatic start almost every year he attended. Here’s the first action frame from his 1955 sequence – when he made his debut as a Ferrari works driver. At extreme left is none other than Colin Chapman heading for his Lotus Mark IX (No 48) which he co-drove with Ron Flockhart, also prominent here are No 43, the Ken McAlpine/Eric Thompson Connaught ALSR and No 64, the Ted Lund/Hans Waeffler MG EX182 works car – forerunner of the MGA – which finished sixth in the 1500cc Sport category. Two and a half hours after Phil took this shot the Le Mans disaster engulfed the crowd just here…

PHIL HILL: “Maglioli did the opening stint in our Ferrari, and just after 6 o’clock the first scheduled refuelling stops were due, and I was up on the pit counter ready to take over for my very first works Ferrari drive. And while I was standing there, one of the Ferrari mechanics down below, on the ground, tugged on my pant leg and pointed across the track, and there was this guy I recognised, Jim McGeechan, standing in the crowd and yelling something across the track at me. If we waited until there was a gap between passing cars we could actually hear one another because the roadway was so narrow.

“He lived just four or five doors down from me on West 20th Street, Santa Monica, and until that moment I’d had no idea he was there. He was calling out ‘Hi – how’s it going…’ that sort of thing – and then, like a lightning strike, our world exploded…

“I remember just launching myself backwards off the pit counter, and months later he verified this by saying he was looking at me, trying to hear what I was saying, when suddenly I just stepped backwards off the pit counter and vanished from his sight. Down just like that. And instantaneously all hell broke loose around him. He was right in the middle of it all, yet didn’t get hit by anything. But his camera case had blood all over it…

“So what in the heck had happened…?”