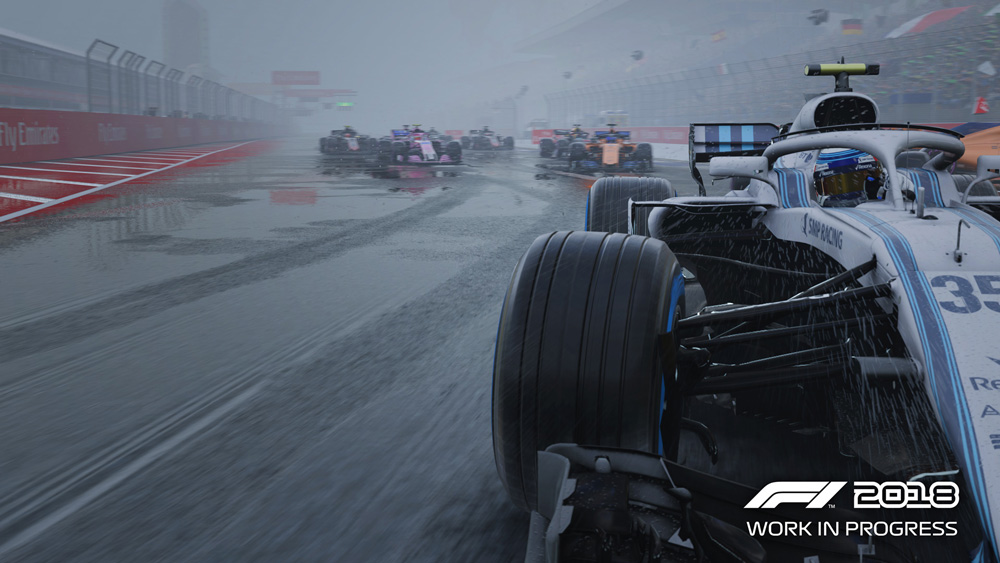 With a reassuring focus on its single-player career mode, F1 2018 brings in some unexpected features that have rarely, if ever, been seen in any racing game.

This year’s tagline is ‘Make Headlines’, which revolves around a new system embedded within the career mode that has you interacting with the media. There’s no gaggle of reporters, rather a journalist/presenter called ‘Claire’ who exclusively dons FIA attire and asks you questions post-session. Your answers, in turn, affect the morale of departments within your team, as well as your standing with your own team and potential suitors.

It’s a system akin to that of a role-playing game. Instead of a good/evil system, you have a showmanship/sportsmanship spectrum instead – although game director Lee Mather stresses that there’s “no right or wrong” here…

“It’s very much what we’ve seen in motor sport in the last few years,” explains Mather on the inclusion of the media. “The presentation and the coverage we’re seeing is so vast that you see the characters – and what they’re like on and off the track. So as soon as the drivers finish, they’re literally getting interviewed as soon as they’re out of the car.”

And if you do decide to move to a rival team, F1 2018 allows you to negotiate contracts this year.

“The player can now decide their career trajectory,” says Mather. “You can negotiate with your existing team or open negotiations with another team, in which case I could approach Ferrari and say ‘I think I could probably get you second place,’ and ask for first driver status, which comes with some nice perks… you could choose a perk that gives you better pit efficiency, for example.

“Ferrari could reply: ‘that’s too much, we don’t value you that highly yet’. So that’s when you enter the negotiation and you get three chances to try and get the best contract for yourself… or you could get a better contract with an existing team. Whatever you do on track or say to the press impacts your value as a driver, but it also affects the motivation of your department.”

Car upgrades probably get the most significant overhaul of all in F1 2018. The ‘skill tree’ returns from last year’s game, but the big upgrades are “shrouded in mystery” with players unable to know which direction will reap the best rewards. And, each team has a different potential, so Red Bull may have more room for aerodynamic upgrades than another squad.

Physics tweaks add up to a much less forgiving package, a slightly steeper learning curve and an altogether more satisfying experience – particularly in the rain.

As with every F1 game, teams’ performance is approximated. Rather than getting raw data from teams, which Mather refers to as the “holy grail”, developer Codemasters uses the same tools that we, on our armchairs, have at our disposal…

“We would never get comparable, actual data,” explains Mather. “That would be very risky, even if it would be safe in our hands; it’s not a thing that teams would allow.

“Character traits of the car are subtle to most people, but we build those into the cars. If they [Brundle and co.] say that one car pushes wide in certain speed corners, we know that their aero package is stronger in some areas than others. We can balance the cars in that way. There’s so much obvious data out there.”

The inclusion of rules changes shakes things up, more significantly perhaps than any other new feature, this year. The first season of career mode will reflect the 2018 F1 season, but following seasons may limit some characteristics of the car.

“There’s nothing more exciting than the first race when you get to Melbourne and do the first three practice sessions and you’re not sure who the quickest team is,” says Mather.

“Then you get qualifying, and the gloves are off, and you see who’s the quickest team. And we want the player to experience that as well. So, there are four areas of the car that you develop in the game: aero, chassis, power unit and reliability.”

“Each one of those areas or multiple areas can be reset with the rules change at the end of the season. Because the rival teams also have to contend with that, they also have to go through the same process as the player,” explains Mather.

It’s a case of working on this year’s car to push your team up the constructors’ championship, or saving up those upgrade points to focus on next season. Of course, aerodynamic changes won’t be reflected on the cars, which must stay true to their 2018 likenesses – so don’t expect double-diffusers to return, or shark-fins to disappear.

On-track, changes have been made to cater for the more simulation-focused players, with suspension physics truer to real life.

This year, suspension travel is modelled at a faster rate, giving a more realistic simulation. It does show: stare at the tyres on a replay and they have a much closer relationship to the suspension.

For those doing full-length or half-length races, tyre carcass temperature will come into play. You’ll have to pay attention not just to the surface temperature but the inner temperature of the tyres, which will affect wear and life more realistically. Pirelli, helpfully, supplied some of that sought-after data to Codemasters.

Physics tweaks add up to a much less forgiving package, a slightly steeper learning curve and an altogether more satisfying experience – particularly in the rain.

Play online, and no longer will rammers ruin the party: F1 2018 has adopted a similar system to that of GT Sport, which grades players based on their sportsmanship and groups clean racers together. Fittingly, F1 2018 grants online players a “superlicence” which records clean racing and performance.

You’ll notice that the halo has been faithfully recreated too, but players can remove the middle of the safety device if it’s obstructing their vision. Subtle lighting changes and details such as dust being kicked up when the player ventures off-line help with the sense of immersion, although judging visual flourish will have to wait for the review – we were testing a work in progress.

The inclusion of more classic cars should appease those turned-off by the divisive head protection device. The full list can be found here, and each of the 20 cars has its own defining handling characteristics and sound, including the much-requested Brawn BGP001.

Sound is recorded as faithfully as possible. Codemasters uses what Mather calls “the smallest recording equipment known to man” to strap onto the cars with as little disruption as possible, recording engine noise, wind noise, turbo noise, the gearbox, the air intake and more to recreate the sound of the whole car.

As for the historic cars, Mather concedes that not all the cars could be recorded on location.

“You can pay to get some of them run, which is really expensive, but we’ll at least try to get an engine of that era, that cylinder type, preferably of that manufacturer, to get the correct engine type,” he adds.

“We wouldn’t just fabricate a sound from nothing. DFVs and Judds run in other formulae, so we had some guys go down to the Silverstone Classic and capture some sounds this year.”

Expectedly, it’s a faithful recreation of the sport, and the couple of hours we spent with F1 2018 implied that this might be the most complete, immersive F1 career experience ever on console or PC. Just wait for our review around the weekend of the Belgian Grand Prix to find out whether Codemasters’ latest release lives up to that.