Imola only hosted its first Formula 1 championship race in 1980, and hasn’t held one for 14 years, but the circuit, in the Emilia Romagna region of Italy, has witnessed more than its fair share of grand prix racing’s controversial moments.

It proved the spark to ignite the feud between Ayrton Senna and Alain Prost, as well as the tragic dispute involving Ferrari team-mates Gilles Villeneuve and Didier Pironi. 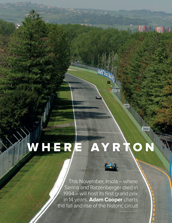 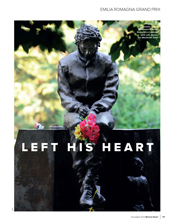 Imola: Where Ayrton left his heart

Motor-racing history hangs in the air in the bucolic surroundings of the Imola circuit, where the streets honour names such as Tazio Nuvolari, Alberto Ascari and Luigi Musso. Under the…

The 1985 San Marino Grand Prix gave us one of the most bizarre ends to a race in history and 20 years later, it marked the arrival of a new champion.

In the December issue of Motor Sport, Adam Cooper charts the fall and rise of the historic circuit, including the tale of persistence that’s behind Formula 1’s return.

Below, we look back at some of Imola’s most controversial moments.

Most of the FOCA teams boycotted the 1982 San Marino GP, leaving just 14 cars on the grid, although that was of little concern to the tifosi, as Ferrari’s Gilles Villeneuve and Didier Pironi shadowed the leading Renault of René Arnoux. 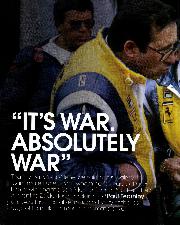 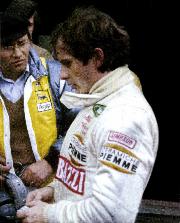 That challenge evaporated in a cloud of smoke, leaving Villeneuve and Pironi to run around at the front in what the former thought was a demonstration for the fans, until Pironi grabbed the lead and stormed to the flag, pointedly ignoring the pit board’s instruction to “SLOW”.

The atmosphere on the podium was frosty to say the least and Villeneuve was still fuming when he lost his life at Zolder a fortnight later.

A year on from Villeneuve’s controversial dispute with Pironi, his replacement at Ferrari, Patrick Tambay, returned to Imola carrying the number 27. 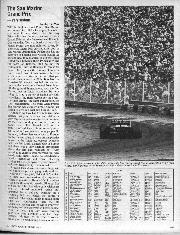 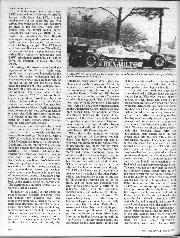 Very serious Imola, 1st May  When the first Grand Prix of San Marino was mooted for 1981 a lot of people scoffed and said it was absurd for the tiny Principality…

Although urged on by an emotional crowd, his car – suffering a misfire – couldn’t match the pace of the Brabham, and the crowd fell silent as Riccardo Patrese overtook for first place in the closing laps.

Seconds later, the circuit erupted with roars from the crowd: just three corners into his lead, Patrese had gone in too fast at the chicane before Acque Minerali and found himself off-line and on the treacherous marbles.

Having already settled for second place, Tambay swept past the wreckage to claim the victory that Gilles had lost 12 months earlier. As the emotional winner noted, it was “revenge”.

Fuel economy often played a role at Imola, not least in 1985 when the race descended into farce as cars stopped all around the circuit. 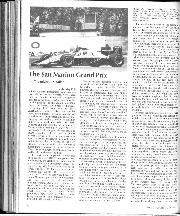 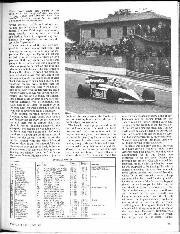 — The mighty are fallen Imola, May 15th.  As soon as the Portuguese Grand Prix was over, all the cars and material were loaded into the familiar articulated transporters and, ten days…

Alain Prost had dropped out of the battle for the lead as he turned his engine down to save fuel, apparently handing victory to the Lotus of Ayrton Senna. But with three laps to go, the Brazilian’s car ran dry and Ferrari’s Stefan Johansson took the lead to the approval of the ecstatic tifosi.

The joy lasted half a lap; Johansson coasted to a halt with an empty tank as did Nelson Piquet from fourth.

It left the strategically-minded Prost to cross the line in front, followed by Elio de Angelis and Thierry Boutsen, who ran out of fuel just before the line and had to push his car to the finish.

The dramatic finale wasn’t over yet, though. Prost’s car was found to be underweight and he ws disqualified, giving the win to De Angelis, who had not led a lap.

This GP is perhaps best remembered for Gerhard Berger’s miraculous escape from a fiery accident, the result of a front wing failure on his Ferrari. It was also a chapter in the turbulent Prost/Senna relationship. The McLaren team-mates had agreed that whoever got to the first corner in front would not be challenged. 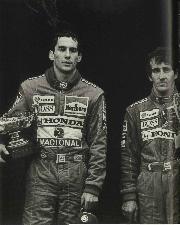 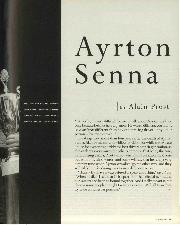 Senna made a commanding start and was pulling away when the red flag emerged for Berger’s crash at Tamburello. At the restart, Prost made the better getaway and led for half the lap until Tosa, where Senna slipped past. He would say that he thought a red flag and restart nullified the deal.

A gobsmacked Prost then set about seizing a string of fastest laps in an effort to retake the lead but lost out in traffic and trailed home in second. He stormed off without speaking to anybody and would later complain that Senna was not honourable.

2005: Fernando Alonso shows the mark of a champion

Fernando Alonso’s first title campaign with Renault was gathering momentum in early 2005, and the fourth race in Imola was to prove an important marker. After the McLaren of Kimi Räikkönen retired, Alonso outran Schumacher in superb style in what amounted to a battle of the generations.

A year later, the German would turn the tables and head Alonso to the flag in the last San Marino GP held to date.