Formula 1 is setting up a foundation to finance internships and apprenticeships for under-represented groups, as part of its new We Race As One initiative.

A personal $1m donation from Chase Carey, CEO of the series’ managing body will provide the start-up funding.

“We fully recognise that Formula 1 needs to be more inclusive and diverse,” said Carey. “While we set out our strategy last year to improve the position of our sport, we need, and want, to do more.” 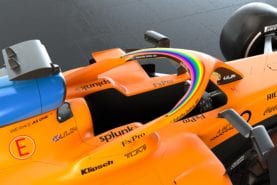 Formula 1 has announced it is launching the #WeRaceAsOne programme focused on combating inequality and racism, as well as supporting frontline workers in the face of the Covid-19 pandemic. Beginning…

He said that the foundation would “support key educational and employment opportunities across Formula 1 that will give under-represented talent the chance to work in this incredible sport and build an exciting career.”

Earlier this week, Formula 1 announced the launch of its new diversity initiative, which will include the setting up of a task force that will investigate how it can improve diversity and opportunity in the series.

As part of this, rainbows will be displayed on cars at next week’s Austrian Grand Prix.

F1 also promised to reveal pledges which will provide more clarity over how it will increase diversity and opportunity by the end of this week.

Announcements so far have focused on tackling racism and general statements about increasing diversity, without specifying other under-represented groups such as women and the LGBTQ+ community.

Last year, F1 set out plans to launch inclusivity programs for drivers, engineers and on-air presenters, to ensure that the series recruits from broader backgrounds.