The highly-anticipated Season 4 of Drive to Survive, Netflix’s smash-hit F1 documentary series, will be released on March 11, it has been announced.

The full behind-the-scenes series, made by Box to Box films, will be available to watch one week before the 2022 season starts, while the second pre-season test in Bahrain is underway. DtS is the fastest-watched Netflix programme of all time, with viewers racing through all the episodes of previous series quicker than anything else ever released on the streaming platform.

2021 was one of the most dramatic seasons ever, packed full of storylines. Lewis Hamilton and Max Verstappen’s ding-dong battle throughout the season – with its highly controversial ending – is expected to be the headline act, but could be strongly supported by Daniel Ricciardo taking McLaren’s first win in nine years, Nikita Mazepin becoming the villain of the F1 grid and much more.

With so much action throughout the season, it remains to be seen how much is portrayed with the series’ typical dramatic licence. 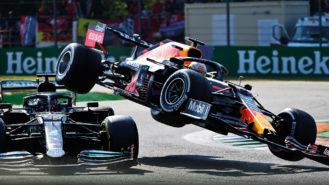 Whilst Mercedes have only featured in one episode for the last two seasons, and Verstappen has elected to not to take part in the new series due to what he believes are the “fake” storylines created, Red Bull team boss Christian Horner and others including Haas team principal Guenther Steiner and McLaren driver Ricciardo have rarely found themselves short on comment in previous series, so there should still be ample insight into what many believe to be F1’s greatest ever title fight.

Many have credited DtS, combined with the thrilling 2021 season, as the main reason for F1’s huge increase in popularity recently, particularly in America. The US GP this year hosted the highest attendance ever for a world championship race, with 400,000 coming through the gate across the weekend, and this was widely credited to the ‘Netflix effect’.

“I think it’s got to be the single most important impact for Formula 1 in North America,” McLaren boss Zak Brown said last year. “Almost every comment you get from someone out of the US, they reference ‘Drive to Survive.’

Season 3 revealed such story lines as Valtteri Bottas feeling like he wanted to retire after being told by Mercedes to let his team-mate Lewis Hamilton win, the implosion of Sebastian Vettel/Ferrari relationship and examined the redemption of Pierre Gasly after his shock 2020 Italian GP win – so expect drama to be played on on screens big and small when Season 4 arrives.