The Singapore Grand Prix will remain on the Formula 1 calendar for at least another seven years, after organisers signed a contract extension to host the race until 2028.

New measures to cut the carbon footprint of the night race have also been announced, including a switch to renewable energy and the use of more sustainable materials in the construction of the Marina Bay street circuit.

F1 is due to return to the circuit in October for the first grand prix in three years, following two cancelled events due to the Covid pandemic.

Lewis Hamilton has fond memories of the track, after a dominant win in 2009, a 2017 victory gifted to him when both Ferraris collided at the start, and a breathtaking qualifying lap in 2018.

The race has served up ample drama, from Nelson Piquet Jr’s deliberate crash in 2008, to Daniel Ricciardo hunting Nico Rosberg down in 2016.

“Singapore holds a special place on the F1 calendar, and this extension is part of our long-term commitment to continue to grow the sport in Asia,” said F1’s president and CEO, Stefano Domenicali. “The Marina Bay Street Circuit hosted the first night race in F1 history in 2008, and Singapore has continued to thrill fans, teams, and drivers ever since.” 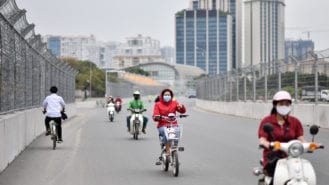 The energy used to construct and clear the city centre circuit each year, as well as to light it throughout the weekend, makes the event a significant contributor to Formula 1’s carbon emissions. The concrete blocks that line the track, and the temporary structures in place for the race also add to its environmental impact.

“The plans that are in place to reduce the carbon footprint of the event are impressive and align with our plans to be net zero carbon as a sport by 2030,” said Domenicali. “I look forward to continuing our successful relationship with Singapore GP and the Singapore Tourism Board as Formula 1 returns to this incredible city.”

The contract extension was agreed between F1 and the race organiser, as well as the Singapore Tourism Board, which is looking to the grand prix to encourage tourists to return.