Until the early 1980s, Formula 1 used cast iron brake discs and aluminium calipers not too dissimilar to those found on road cars. As Steve Bryan – trackside man in F1 from the 80s until 2017 for long-time brake supplier AP Racing – puts it, “I think the calipers used to be about £60 each. That wouldn’t even buy a pair of pads today. If you wanted to build a car back then that is how it was. You got an engine from Cosworth, a gearbox from Hewland, folded up some aluminium honeycomb, bought brakes and a clutch and you were nearly there.”

However, these simple brake systems were being taken to the limit thanks to rapid aero and tyre development As an example, Bryan highlights Renault. “They were the first to switch to turbocharged engines and they had a particular problem with the brakes overheating, because you don’t get as much engine braking from a 1500cc V6 compared to a big old 3.0 litre V8,” he said. “The car was also a bit heavy at that stage with all of the radiators and intercoolers hanging off it.”

Carbon-carbon brakes would prove to be the answer to such problems, though not without their share of teething problems. Brabham started to use the material in 1976, but it would not reach maturity until the 80s. By way of background, carbon-carbon brakes originated in the aerospace industry, where they were first developed by BF Goodrich and one of their earliest uses was on the Concorde supersonic airliner, the brakes for which were developed under licence by Dunlop.

Gordon Murray, who at the time was working for Brabham, recognised the benefits they could bring to vehicle braking: greatly reduced weight compared with cast-iron discs, and much higher temperature resistance. 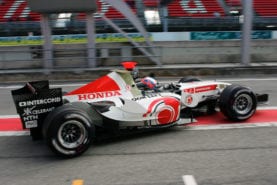 Honda’s paradigm shifter that flew in the face of convention

If or when they ever arrive, the new Formula 1 regulations will place tight limits on teams updating their transmissions. However, if we scroll back 15 years, no such restrictions…

The very first carbon-carbon brakes used in racing were not of the pure carbon-carbon construction as we know them now. Dunlop was concerned about the matching of the thermal characteristics of a carbon disc on an aluminium brake bell and so built a composite disc assembly. This consisted of an inner steel plate with 20 carbon pucks mounted on the surface, ten per side. Unfortunately, this approach did not work, as the differential in the thermal expansion rates of the carbon and the steel caused the discs to deform. Once deformed, they rubbed against the calipers, causing them to overheat and boil the brake fluid.

Brabham went on to team up with another material supplier, Hitco, and solid carbon discs were developed using an aluminium mounting bell that removed the problem of warped steel centres, but Murray and Brabham still had to overcome a host of other thermal challenges. For example, the heat generated during braking led to problems with the surrounding components, such as the wheel bearings, which required the use of cooling vents and passageways in the uprights.

It was not until 1982 that a car equipped with carbon-carbon brakes finished first in a grand prix, that of Nelson Piquet, driving the BT49D at the Brazilian round of the championship, although he was subsequently disqualified for having an underweight car.

For some time Brabham was the only team using its solid, carbon discs, but other teams began to experiment, Bryan explaining. “They were fine at any circuit that wasn’t terribly hard on brakes, it gave you all of the advantages of low mass, low inertia. But the cooling was limited, so they had to swap back to cast iron discs when they went to anywhere hard on the brakes. That was kind of the accepted wisdom, carbon brakes are for easy circuits, cast iron for when it gets tough.” 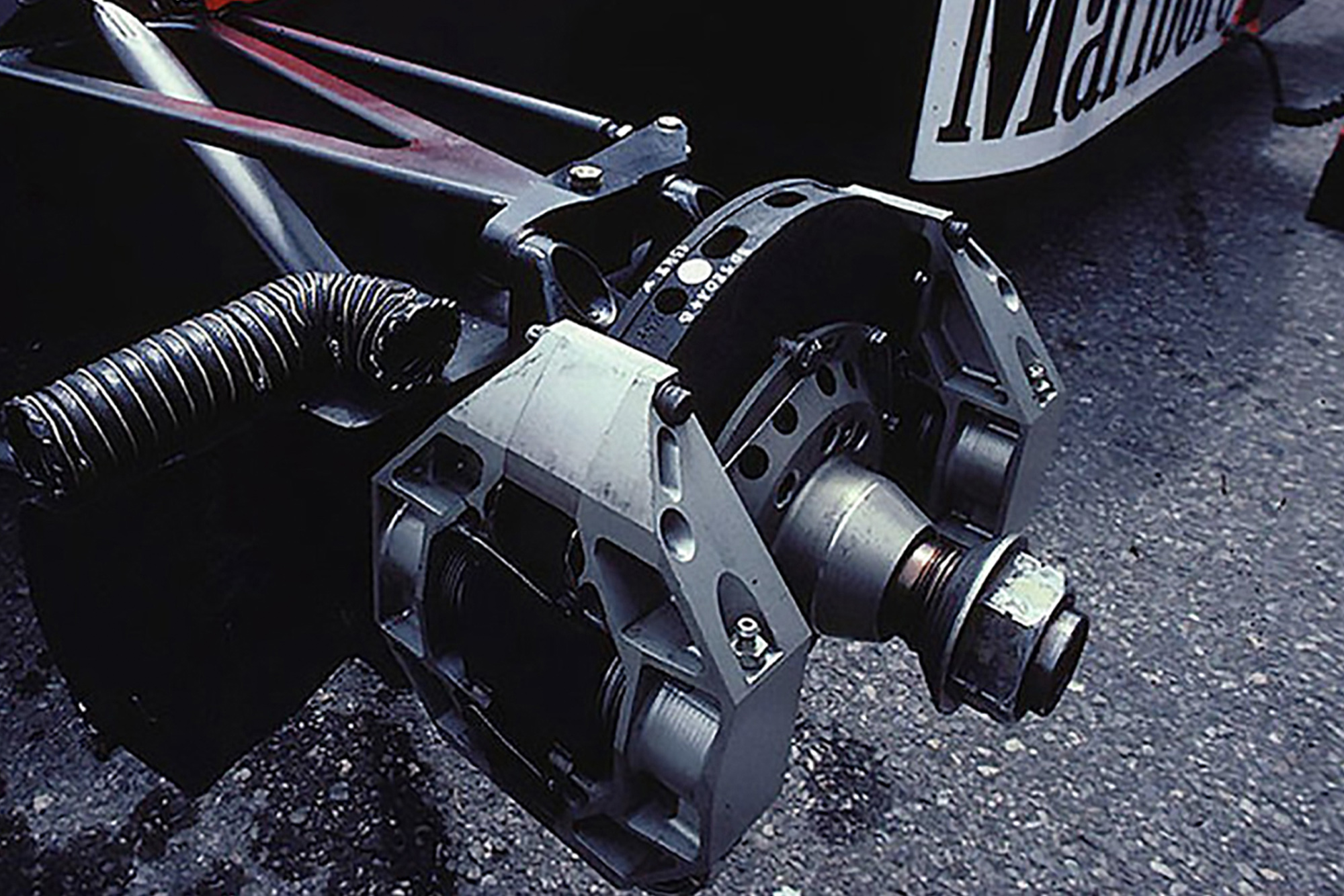 It was McLaren that was the first to challenge this established practice, and French aerospace supplier Carbon Industries made them ventilated discs, greatly aiding cooling, which were coupled with an all new, in-house caliper design.

The McLaren calipers employed features such as pistons that protruded from their bores, making the caliper wider and giving a greater air gap between the pad and the caliper. They also used a titanium bridge between machined aluminium cylinders to improve stiffness without adding too much weight. 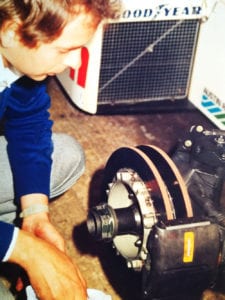 As Bryan pointed out, “compared to the technology we were offering at the time, it was a quantum leap. So that set the new standard. We had to pull our socks up and start machining calipers out of decent aluminium billets rather than casting them. In the best motor racing tradition, we poached some of the ideas.” So it was that carbon-carbon brakes became the norm and, after some interesting experiments, such as the Williams twin disc setup illustrated, they have been refined into the stoppers you see in the paddock today. An interesting point of note is that Williams experimented with a return to metallic discs in 1995, and thanks to developments in pad materials, they had similar stopping power to contemporary carbon brakes, however, in the weight stakes, carbon remained far superior.